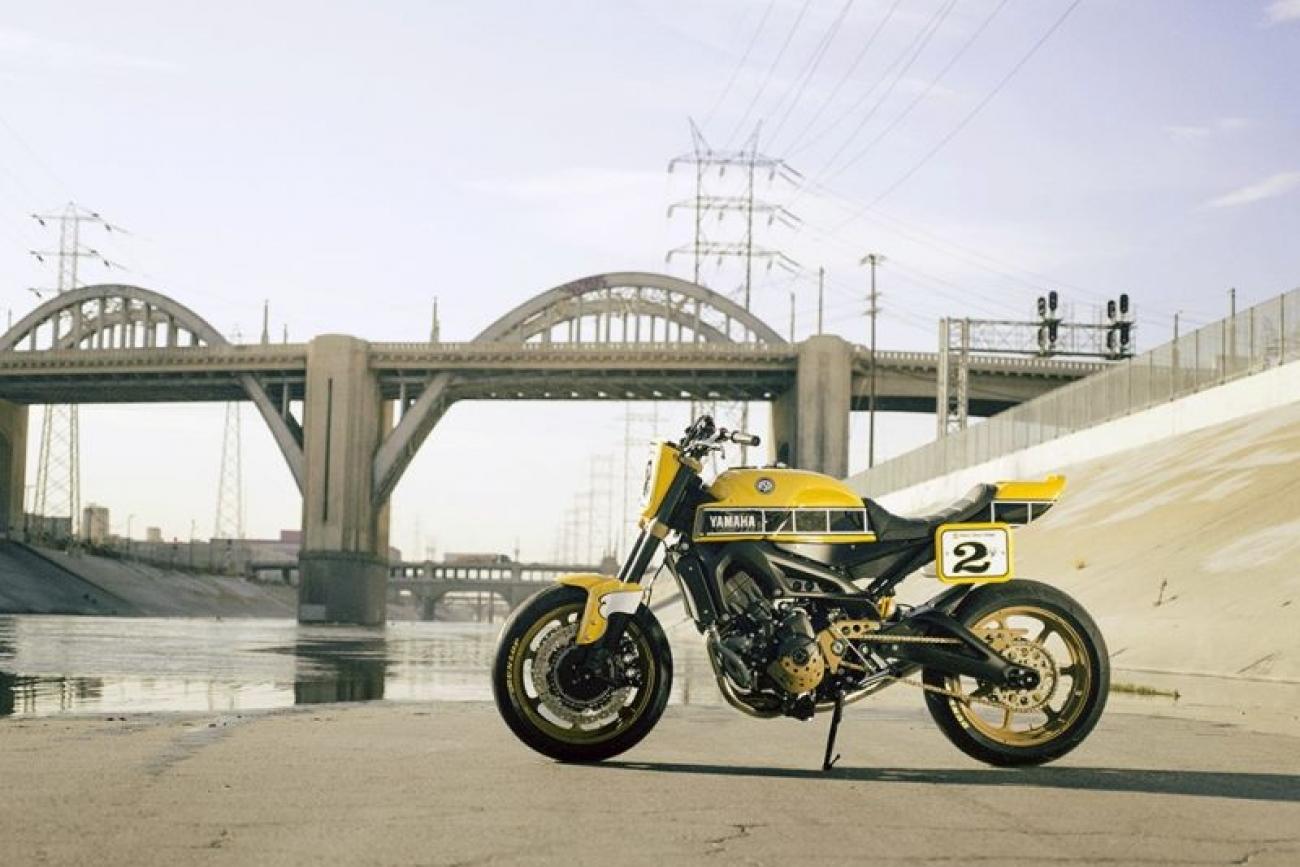 Yesterday, the Circuit of Wales project was finally given the green light to begin development by the Heads of the Valleys Development Company (HOTVDC), per MotoGP.com. Work will soon begin on the reported £315 million dollar project, which will bring a motor sport venue to Blaenau Gwent. The circuit already has a contract with Dorna to host the British GP from 2015 to 2019. Silverstone is expected to run the event for a second time next year, with the round moving to the new venue in 2017. Moto Magazine is now reporting that the plan is to also hold motocross events at the facility. In an interview with Chris Herring, the sports director confirmed that “motocross, trials, enduro and an indoor dirt track” are planned. More from Moto:

Herring, a former off-road bike journalist before switching to road race team management for HRC Honda in MotoGP and other teams, visited the British motocross GP at Matterley Basin and has had meetings with GP bosses at Youthstream about the potential of future events at his new venue.

Jet Packs Are the Best

I think every small child one day dreamed of flying around on a jetpack. If not, well, you need a better imagination. While I know very little background on the video, I don’t think it matters. This is amazing and I hope very soon we all have jetpacks to fly around with.

Good news: the creators of the video, JetPack Aviation, says they may sell them one day.

Our R&D plan includes longer endurance but trust me, when you fly at more than 100 mph for 10 minutes + you will know you're flying the world's only jetpack. One day we will be in a position to sell them and maybe sooner than people think but we want to make sure we have all the training systems etc right first. JB-9 is amazing but it's just the start!!

The Most American Rap Video In History! pic.twitter.com/cPrT6sETqp

In just over a week since its release, Recoil 3 has already raked in more than 1.3 million views on YouTube. The third installment of the popular series from Toyo Tires features two-time Baja 1000 Trophy Truck Champion BJ Baldwin chasing Sasquatch through the woods of the Pacific Northwest, into the city of Tacoma, Washington, before finally racing, well, leaping, into the Tacoma Dome. With a nickname “Ballistic”, does it really surprise you this video is off the rails?

Yamaha and Roland Sands have teamed up for a fifth time to create the stunning Faster Wasp, a retro-themed crotch rocket. The bike pays tribute Kenny Roberts' iconic TZ750. "Faster Sons is a mind-set to respect what comes from the old days, pureness, quality materials and design simplicity, blended with cutting edge technology", commented Yamaha Motor Europe Product Manager, Shun Miyazawa. Check out the video below with Roland and Miyazawa discussing the bike.

Ah, nothing like some good ole-fashioned drama to end the season for Kurt Busch. Sunday at the Quicken Loans NASCAR Race at Phoenix International Raceway, Busch missed out on a spot to race for the championship (whatever that is. It’s changed so many times I’m not sure what it even involves now), when he was penalized for narrowly beating pole sitter Jimmie Johnson to the start/finish when the race began. Busch was pissed after the race. "That wasn't a penalty," Busch said. "That's a reason to start a survey and right now, I encourage everyone to go on to Twitter, my Facebook, my Instagram and follow it and we're all going to have a survey.”

A few days later, though, Busch backed it down a bit, tweeting: "I broke a rule, and NASCAR made the correct call. If this is something that continues to be consistently called, then I'm at peace with it."

In other news, he has a pretty sick house. Busch, a Monster Energy athlete, recently opened up his home in North Carolina to the energy drink giant for a NASCAR cribs edition. Hopefully this one goes over better than the Jorge Lorenzo one we posted a few weeks back.

New Ducati for (SOME) Dirt

We implied last week that Ducati may be on the verge of releasing an off-road focused Multistrada. At the EICMA motorcycle show in Milan, Italy, this week, Ducati confirmed the adventure bike, the Multistrada 1200 Enduro . A 1200 seems like a lot of bike to take off-road but the info and video below confirm it can be done. Of course, adventure bikes aren't supercross bikes, anyway. More from Adv Pulse:

The most obvious change seen on the Multistrada 1200 Enduro are a set of wire-spoked wheels and an increase in front wheel size from 17″ to a more dirt-oriented 19″. A beefier skid plate and raised exhaust offer better protection in rocky terrain and the new Enduro model also sits higher than the standard Multistrada, due to an increase in suspension travel from 6.7″ (170mm) to 7.9″ (200mm) front and rear. Electronics have also been updated to enable more off-road capability. Advanced electronics recognize when the bike is being jumped and automatically adjust the suspension for softer landings.

This kinda dirt thing is working for Ducati, anyway. According to Asphalt & Rubber, Ducati has sold more than 50,000 units for the first time in the Italian manufacture's history. Per the report, this is up from 45,100 units sold in 2014. This is in large part thanks to the Ducati Scrambler line, which, according to the report, is up 13,609 units in the first three quarters. More from Asphalt & Rubber:

As we have reported before on Asphalt & Rubber, the sales increase being posted by Ducati is a bit of red herring with the brand. While the Scrambler line has shown strong growth for Ducati, the rest of the model lines have been weak for the year.

For instance, sales for the Ducati Multistrada 1200, Ducati Hypermotard 821, and Ducati Hyperstrada showed only nominal growth for the first three quarters (the most current sales data being posted by Audi AG), with a gain of 5%.

Let’s face it: electric bikes are the future. No, you won’t wake up tomorrow to find your gas filled friend replaced by a pile of batteries and chargers, but at some point in the future, electric bikes will become the norm. BMW recently released the eRR, an electric superbike and the first from a major OEM. At this point in the game, it’s a lot of trial and error, but you can see the writing on the wall when major OEM's start to get involved. Lane Splitter has more on the release.

BMW Motorrad head honcho Stephan Schaller says the idea comes as an attempt to mate the high speed performance of their superbike with the BMW with the fastest 0-30 mph times: the BMW C evolution electric scooter.

Josh Hill may have officially retired from professional racing, but that doesn’t mean he still can’t absolutely send it!

Josh’s younger brother Justin, who moves over to TLD KTM in 2016 as the team becomes the factory 250 team for the Austrian brand, may have one upped him though!

Who sent it better?

Oh, IKEA Belgium, you little rascals. They totally had me… for like ten seconds anyway. Smart marketing, but judging by the YouTube comments, not everyone enjoyed this pretty funny commercial. Does anyone ever enjoy anything in the YouTube comments?

Finding a path into the world of motocross media is no easy task. It’s not a huge industry and the lucky ones that have already made it have established good reputations, which makes it harder for you—the unknown person—to find a place. If you are one of the lucky few to get an opportunity, don’t expect it to be a rock n’ roll lifestyle. It’s hard work. And mundane at points. And really hard work. But, it’s also really, really fun. If you have dreamed of working in the industry, now is your chance. We are hiring a West Coast Editor, who will be based in California, and an Online Content Publisher, who will be based in Morgantown, West Virginia. Working with us will probably be the best thing you’ve ever done in your entire life!

How I Will Remember Kyle Partridge

After an eleven-year career, Kyle Partridge announced earlier this week that he would be stepping away from professional racing. Partridge sustained a broken C6 and C7 in a practice crash over the weekend, and decided that he wanted to turn his focus to being a father for his son Landon. While some may best remember Partridge for his time with Hart and Huntington, I will always remember him for this….

Congrats on a great career, Kyle. If you wish to help Kyle, a GoFundMe page has been set up in his name.

Yesterday, ten-time world champion Stefan Everts gave a very candid interview with our own Eric Johnson on his return to Suzuki. Everts spoke of his decision to leave KTM, which he admitted in part had to do with his soured relationship with Jeffrey Herlings: “Yeah, I mean, I don’t have to lie here," he told us. "It had something to do with it. It wasn’t only that and there were more things, but you know, Herlings had something to do with it. That’s clear.”

He also talked about how replacing Sylvain Geboers would be a big challenge. “It’s a very big, very well-respected team and Sylvain is a very big personality and to step into his show is… like I said, a very big responsibility and it took me a little bit of time to make the decision, but it was now or never and I took the chance.”

You can read the entire interview here. Also, check out this great video by Suzuki on his return.

Dog of the Week

Last week was an amazing dog week. First, we had Otto, a skateboarding pup, set a Guinness World Record in Lima, Peru, by skating through the legs of 30 people. Seriously, this is pretty amazing. Even Jason Weigandt (notorious dog hater) has to respect this. [Editor's note: nope.]

That had to be the best thing a dog did last week, right? Wrong. This may be the greatest thing ever! Pug life, bro!

Who is dog of the week?

2015 Formula One World Champion Lewis Hamilton reportedly crashed his limited-edition $2 million dollar Pagani Zonda last week in Monaco. The BBC said the crash happened at 3:30 in the morning. Later, the Telegraph reported that “a spokesman for Monaco’s Palais de Justice said: “Mr Hamilton’s foot slipped on the brake and clutch pedals and his vehicle struck three parked cars. He was tested for alcohol but the result was negative.” Luckily everyone was okay. But, can you imagine the repair bill on a $2 MILLION dollar car?

Lewis wrote the following on Instagram prior to last weekend's Grand Prix of Brazil:

Dear TeamLH, just wanted to let you know why things have been quiet on social media the past few days. I’ve not been well with a fever but I also had a road accident in Monaco on Monday night. Whilst ultimately, it is nobody's business, there are people knowing my position that will try to take advantage of the situation and make a quick buck. NO problem.

Nobody was hurt, which is the most important thing. But the car was obviously damaged and I made very light contact with a stationary vehicle. Talking with the team and my doctor, we decided together that it was best for me to rest at home and leave a day later.

But i am feeling better and am currently boarding the plane to Brazil. However, I am informing you because I feel we all must take responsibility for our actions. Mistakes happen to us all but what's important is that we learn from them and grow.