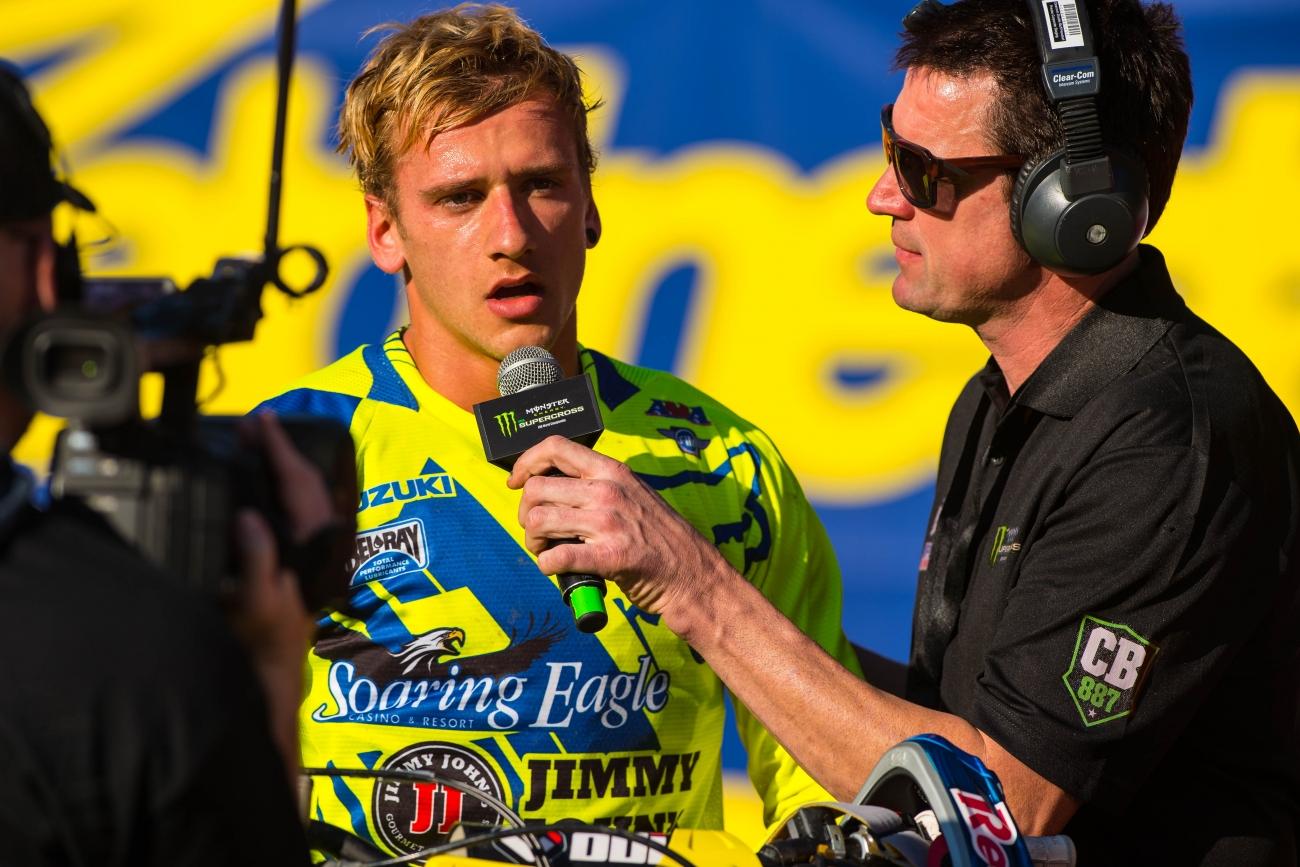 The final three rounds of the 2015 MotoGP championship were soaked in controversy. The media coverage was intense over the last month, which got us thinking: How does covering MotoGP differ from covering Monster Energy Supercross, Lucas Oil Pro Motocross or the FIM World Motocross Championship?

On Track Off Road editor-in-chief and Racer X European contributor Adam Wheeler has been covering supercross and MXGP for quite some time and is one of the most respected journalists in Europe. In 2013, Youthstream named him “Journalist of the Year.” Adam was in attendance for the final round of the season in Valencia, so we asked him about the differences in media coverage of the series’. (Adam doesn’t make it to many Lucas Oil Pro Motocross events as he’s on the beat with both MotoGP and MXGP during the summer months.)

Here is his take.

As you’d expect working in MotoGP is a level up from motocross and in fact pretty much every other motorcycle racing discipline. The rate of interest, politics and power is that much greater thanks to the wider spotlight. An unpredictable (still pretty much between four riders and two factories) 2015 racing season and some acerbic moments—almost car-crash viewing—created an even bigger squall of attention this summer and fall.

Riders are far less accessible, and it’s little surprise considering the hoard of fans who religiously wait around Yamaha and Honda race trucks for a mere look or wave from athletes like Rossi (by far the most popular), Lorenzo, Marquez, and Pedrosa. Having said that, trying to track down and glimpse the likes of James Stewart, Ken Roczen, and Chad Reed at a supercross can be just as challenging. Some do hang around and buzz through the paddock on scooters, pausing to chat to people, but for journalists there is normally a rigid process that is often restricted to the tranquillity of a Thursday afternoon before a Grand Prix gets under way with practice on Friday morning.

Most team press officers—those who receive requests, grant permission, and then organize a rider or team member’s media schedule—will entertain one-on-one sessions only on Thursday or Friday. If a journalist wants quotes, material, or knowledge outside of this potential window then it comes down to the intricate web of media debriefs or “scrums” that see most of the top racers sitting down in hospitality structures or pit boxes for ten-minute mini press conferences. The sessions are coordinated for the most part between the teams so it is possible to run around and interview several different riders in an afternoon, providing one debrief does not over-run or the rider is not late. It is quite a handy system and the more articulate riders usually get the bigger audiences and riff on a range of subjects. Outside of these scrums riders also have sponsor commitments, TV interviews, and requests from Dorna [the series promoter]. It is not at F1 levels—from what I see and believe—but it can still mean a busy time once the helmet and leathers are off.

As seen in Phillip Island, Sepang and Valencia and the whole Rossi-Marquez mess, there is quite a tendency for manipulation through the press. Rossi’s debriefs were attended by crowds that overwhelmed Yamaha’s vast hospitality structure in Valencia last week. The Italian used the stage to volley his thoughts and suspicions. Riders are accustomed to media attention from a very young age and seem to know how to handle speaking and conveying their message to a packed room of much older men and women as well as TV camera lenses. Rossi in particular is a master of the barbed compliment delivered with an infectious smile,often prefaced with a giggle, which suggests the whole thing is a bit of a joke, or that he’s not serious. The press, Italian media especially, usually hang on every word.

The timetable is so long and relentless at a Grand Prix these days that the best chance of quality content is best taken on a Friday or Saturday night.

The higher up the pecking order, the tougher it gets. I’ve interviewed Rossi on two occasions but I haven’t gotten close in recent years. Marc Marquez is another elusive one, and there’s little surprise when your request for a special publication(s) has to fight with mainstream TV stations, newspapers and magazines. Supercross has a similar setup for media but this is only because the time frame is so short on a Saturday. If you don't have something pre-booked with the elite then forget it. MotoGP is often far better and easier than supercross post-race. The official press conference is normally still followed by the media debriefs, although Valencia saw the whole show delayed and out of whack after the title decider. After a SX main event you’ll be lucky to find two riders in the paddock after the podium press gaggle amidst the teams packing up and shipping out. Understandably everyone wants to hit the road, as it’s late in the evening once everything wraps up, but there is little doubt that a small group of racers will always be in demand.

MXGP has relatively low barriers and depending on the Grand Prix (Cairoli in Italy? Roczen in Germany? It’s going to be tough without pre-arranging.) Simply approaching a rider who might be hanging out under the awning or on a pit bike watching a practice session can normally result in confirmation of a small interview. The timetable is so long and relentless at a Grand Prix these days that the best chance of quality content is best taken on a Friday or Saturday night. It is also refreshing to see riders who still make a point of coming to the pressroom on Sunday evenings. Sometimes it is to speak with journalists from their country, look at some race photos, connect to Wi-Fi to update their social media, or conduct their own press duties. I always encourage pro racers to make this step; it’s an easy way to get the media on his/her side and it shows some professionalism when it comes to promotion and image.

Regardless of the series, it is the personal relationships that really help when it comes to content, quality and information and these are built in the same way as other business; reliance, trust, exchange, and compatibility. There is more acknowledgement of that “media-athlete” barrier in MotoGP because access is set in controlled conditions (often a team PR will sit in on the interview and/or debrief) and as the level of demand drops for something like MXGP, so do the limitations.

Both sets of coverage have their pros and cons. In MXGP you might have a fantastic interview that you know won’t reach the audience numbers it should, while in MotoGP your chances of sitting down with Marquez each season for some unique story material will be extremely few and far between. In a way you are lucky if you can sample and take the lessons gleaned from making the most of both spheres.