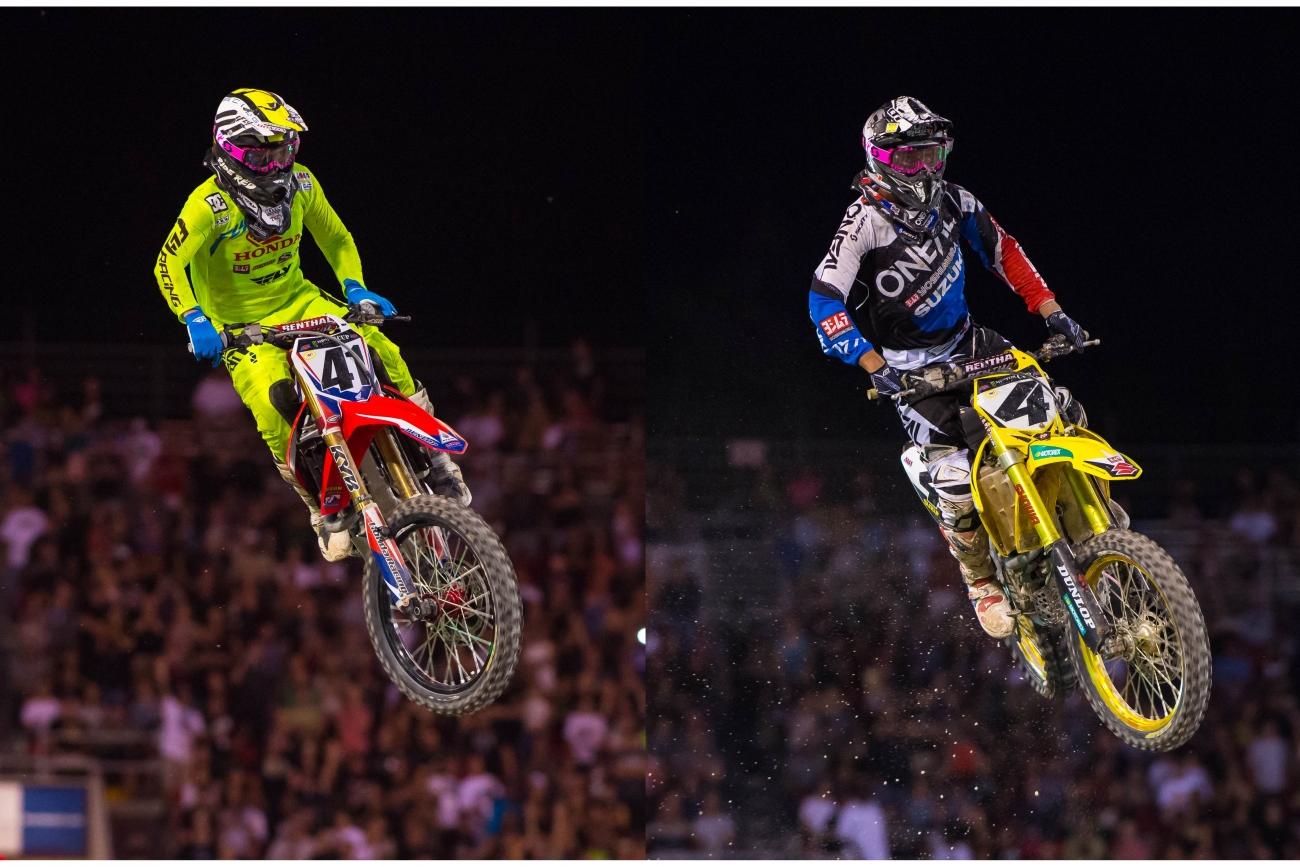 By Steve Matthes and Chase Stallo

Racer X: You had speed tonight. Fastest qualifier, but had a couple of bad starts and a crash. Has to be frustrating.
Trey Canard: Yes and no. It's always good to know you had speed. Really, the first one, I got a good start and I slipped while leading. It was really slick out there and I wasn’t expecting it. Second one, I had really bad gate position because of the first one. Still ended up decent; I think I was fourth by the second lap. [Jason] Anderson had kind of already stretched it out, though. I was happy to get second. Last one, I had a decent start, really; I was right with [Ryan] Dungey. I went to pass Anderson, and I don’t know if he broke traction or moved over on my or was just trying to squeeze my line, but he hit my front wheel really hard and it really threw me off. Jumped off the track into the tower, which was really scary. I wasn’t too happy about that.

Looked like the bike got jacked up pretty good.
Yeah, front wheel was twisted, but I wanted to get up and ride. Just something about not quitting that I always want to exemplify. I felt good! Brent [Presnell, mechanic] said I had the fastest lap time for a good chunk of time. I was happy about that, and it makes me excited for January.

"My results didn't really show anything in the outdoors, so I'm really happy to feel good about the speed today."

Any Joker Lane issues? How was it?
I liked it. I thought it was good. I think it made the track a lot better because they didn’t waste that space [as in past years] making a Joker Lane.

Okay, well, tough break, but like you said, you have speed.
Yeah, especially coming off of an injury, you never know how you're going to bounce back. My results didn't really show anything in the outdoors, so I'm really happy to feel good about the speed today. – Steve Matthes

Racer X: I heard you just mention doing the quad in practice. I think this past year you keep saying your mindset was to stay healthy and make all the races. Is next year a little different for you?
Blake Baggett: Yeah, a little bit different. I think I need to get out there and do something different and try to be a guy [up front]. The goal is to send it if you have to send it, and that's what's going to be on the podium or win races. If it doesn't happen that night, it doesn't happen that night. You just need to go for it. I need to get that in my habit. It's normally not my habit; never really has been. So I need to change some habits and go for it. With that, I think if I can do that I can up my game and up my finishes.

We saw the preview for Moto 7 and your huge compound down there [Florida]. Does it help having that and having all those guys around to kind of bounce off of a little bit?
Yeah, I think the faster people that you ride with, you learn a lot and you get smarter and you get a little bit crafty with things. Just need to work on that and keep plugging away. I felt like I had good speed tonight. I needed to work on a few little areas. A tenth here, or a thousandth here. Just hold the gas on for just a hair longer or get on the brakes just a hair later. Just little stuff. But I feel like our bike setup is really good. I’m excited for A1.

"The goal is to send it if you have to send it, and that's what's going to be on the podium or win races. You just need to go for it. I need to get that in my habit. It's normally not my habit; never really has been."

James [Stewart] wasn’t here much. He went out early. Last year he was around, but he wasn’t racing. This year he’s going to be racing with you. What was it like today to actually have a teammate for the first time in a while?
It was a little bit different, to be honest. It was kind of weird at first. But, to be honest, he does his own thing and I do my own thing. We both ride yellow bikes out of the same tent, but other than that we do our own thing.

What do you put into these races? Is it just testing purposes? I know it's easy to say, "We don’t do much," and then you get out there and you get competitive.
The goal every time you go on the track is to do the best you can and try to win. When we come here, you're just using what you've tested to try and see what it's going to do under race conditions, but at the same time you're going for the best finish you can and trying to prove something.

Tonight didn't go exactly our way, but we walked out of here healthy. Normally, that doesn’t happen with me here. I've actually never walked out of here healthy, so this is the first year that I've walked out of here without a cast or something all busted up. Survived it and we just use this race to kind of see where you're at and learn off of things. It's hard to mimic race conditions at a practice track that you've done a million laps at and you know. So that's where I feel that you come here: there's crowds, there's lights, there's everything, there's a start. You can't [say], "That wasn't a good practice start; I'll do another one." There isn't that. So of course this start tonight was beyond tricky. It was hard to get the right clutch action to get it to either really bite hard or not bite enough. I kept going back and forth on that. Just didn’t have that mastered. We'll just see what we got when it comes down to the dirt in Anaheim 1 and it comes up to gate pick. – Chase Stallo