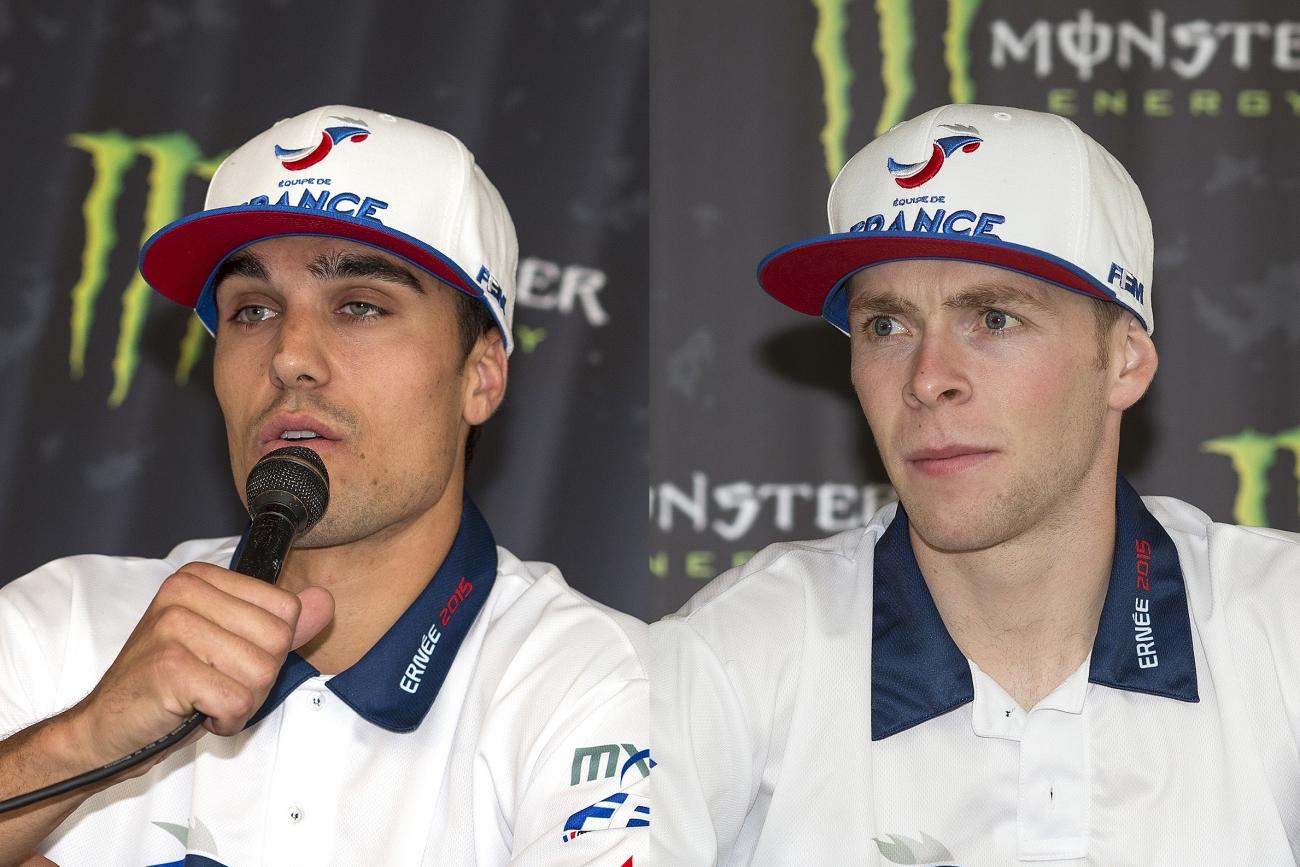 Romain Febvre wasn’t on a lot of folks’ radars when the year began. He was a rookie in the MXGP class of the FIM World Motocross Championship, completely overshadowed by huge names like Antonio Cairoli, Ryan Villopoto, Clement Desalle, Max Nagl, and even his own Yamaha teammate Jeremy Van Horebeek.

Months later, he’s on top of the world, having dominated the MXGP title chase and finished the year with 1-1 moto finishes to lead France to a historic home victory at the Monster Energy FIM Motocross of Nations.

Last year, Gautier Paulin was the French hero by logging a similar 1-1 at the ‘Nations, but this year has been, as he says, “complicated” due to his switch from Kawasaki to Honda. He’s a gamer, though, and has hung tough through a late-season knee injury to help the team win for the second straight year. They both spoke at the post-race press conference, and our Steve Matthes also caught up to Paulin.

FIM Press Conference: What a perfect season for you.
Romain Febvre: I cannot expect anything more than this. Before the season I didn’t expect any results, so first to win some GPs, and to get the title with three to go, it was just unbelievable. To come here with a lot of pressure from the crowd, it’s something special. I never did it before. I’m really pumped that we won again. We’ll see next year again.

You had some interesting battles again with Cooper [Webb]. Tell us about them.
Yeah, already in Glen Helen we had some good battles, was really clean. It’s racing. The second moto today, we were a little bit faster than everyone. We had just a nice battle. For me, the third race was a little bit more difficult with Ben Townley. He was riding really good, so I just catch him, I pass him, and I tried to get away, but he was sticking [to] my rear wheel. I’m really happy that we won.

You won your first Grand Prix this year at Villars Sous Ecot. Compare that victory to the one today, where you crossed the line knowing that you had won the championship; you had won the Motocross des Nations.
It [feels like it has] been a long time from that, but when you win your first GP in any GP class, it’s something really special. It was already France, so the crowd was also amazing. After you get the title, you have a lot of pressure off, so that’s always really good. The first goal was the world championship, and then after that we were focused on the Motocross of Nations. Now for sure we will enjoy this moment.

On Friday you said that you didn’t know if this would be the biggest race of your career. You want to change your mind now?
Yeah, for sure it’s one of the best races I did, just with the crowd. It’s amazing. Everywhere you are, you can hear the crowd. They give more than 100 percent. For sure to cross the line first, it’s always special, but to win in France, the Motocross of Nations, for sure it was the best experience.

FIM Press Conference: Having the huge task of trying to defend the title that you won last year in Latvia. We know there was massive pressure on you guys, but you stood up. You delivered today, but it wasn’t easy, was it? You didn’t make great starts from your own personal races, but just tell us about those two races today.
Gautier Paulin: Just everything today was about fighting, just to try and take this title. We know that we are here and all the best riders of each country are racing, so to defend the title here in France in front of the crowd of Ernée, it’s amazing. They were reaching for us. It’s unbelievable the feeling we have when we ride, and even in the paddock. I definitely want to thank my teammates, Romain and Marvin [Musquin]—they did a great job. I also want to say hi to Dylan Ferrandis and Steven Frossard, my teammates from last year, which won the title. Right now, working with Pascal Finot and the French Federation, he did an awesome job to give us the best material to try and concentrate and to get ready for this event. We get the title now. As a sportsman we are always looking forward for next year. But definitely the hardest thing after winning it last year was to keep it here on the home soil—and we did it.

What about the first race? There was a moment around about lap six, lap seven coming out of the first turn into the second corner. You lost the front end on a jump. That was a pretty scary moment.
Yeah, pretty scary moment. I just landed and took the front brake and just took off. I just didn’t expect that and lost the front, so I crashed. Max Nagl just hit my bike, and my bike, the bar was bent, but I was still giving 100 percent. And I have no regrets, definitely.

What about the final race? How difficult was that for you knowing that the title was on the line, with only 2 points going into the final race between you and the United States?
There was just one goal to fight for it, like when you go to the war. I did fight for it. At one stage I had on my board that five [fifth place] was okay, so I kept on that spot and it was a tough one. Like everything, it’s on two riders, so it’s a tough one when they say five is all right. So I just kept my spot and continued riding smooth and going to the end. I was feeling much better in the second moto than the first one. Thanks very much to all the public. It was just something special.

This team is a really strong team, and going to Maggiora next year, I’m guessing you guys all like that track. That will be three in a row. That’s something only America has been able to do in the last twenty or thirty years. Is that something you’ve been excited about?
Each year will be different. Each year we have a nice group of good riders in France, too, so we don’t know what’s going to be the team next year, but I’m definitely looking forward to keeping that title. Even next year in Maggiora, it’s going to be an awesome crowd. The track will be a little different, but each year it’s the same goal. Each year we have the same race. We need the same preparation to get ready for this event. We’ll see. Right now we need to think about our win. We will see in the future what it will bring.

Steve Matthes/Racer X: Congratulations—two years in a row. I think this is the first time it’s been done in a while. France has never done it. You are good at these things. Today wasn’t a Gautier Paulin domination like last year, but you still got to be pumped.
Yeah, I’m really pumped to get back the title here, like you mentioned. USA had a great ride this morning. The track was a little more rough here and more soft, and definitely was a little harder for me. Today, Marvin went two times in a row up front on the inside. He did a great job with the 250 winning his class, and Romain just dominated the thing, so it was really good to ride with those teammates. Now I can say, with my knee and deep ruts, it wasn’t good. But I knew I can hold it to give a win to the team, and we did it. Now it’s over and tomorrow I’m going to see the doctor.

Did you know you were in place to win late in that third race?
Yeah, I was coming back on [Evgeny] Bobryshev and grateful for the pass. They told me that five was okay so I could manage to keep that spot, and then I knew we would win it. I took it easy the last laps and just did it for the team.

All new teammates this year from last year. Did you give the guys any advice? Did you say, “I’ve been through some stuff,” and maybe changing the gate pick where you take the second gate pick. Did you have anything to say?
Yeah, sure, like with Marvin I did many Motocross of Nations, but when he was there, there was no captain. Three years ago they asked me to be the captain.

He struggled a bit at the other des Nations.
He did the best one, actually, the first one in 2009. He did two times five [5-5 moto scores]. But from that stage there was no structure, and now the French team really put a lot of effort in this event to give us a really nice hospitality and structure to be up front. Marvin knew that stage, but now he sees the difference from that then compared to the old time. Romain, this was just his completely first Motocross of Nations, so I’m not telling him how to ride, but just explaining that we need to share lines—we need to share lots of things. We need to be a team and not be battling anymore like we would during the year. I tried to give all the experience I have. He told me that I did good; that it was just like nothing new coming here, so he was pretty confident. It’s awesome to get it back, to go back with this title.

Next week on Tuesday, I’m hosting an Internet radio show with [David] Vuillemin. You’ve got one more des Nations than he does. You have anything to say to him?
Yeah, I didn’t know that I’ve won more Motocross of Nations, but definitely it’s really good. DV is a good friend, but I beat him [laughs]. It’s great to have seven in a row [appearances on Team France] and two wins. It’s just awesome. The moment on the podium is something not many riders can have, I think, and this will stay in my heart for a while.