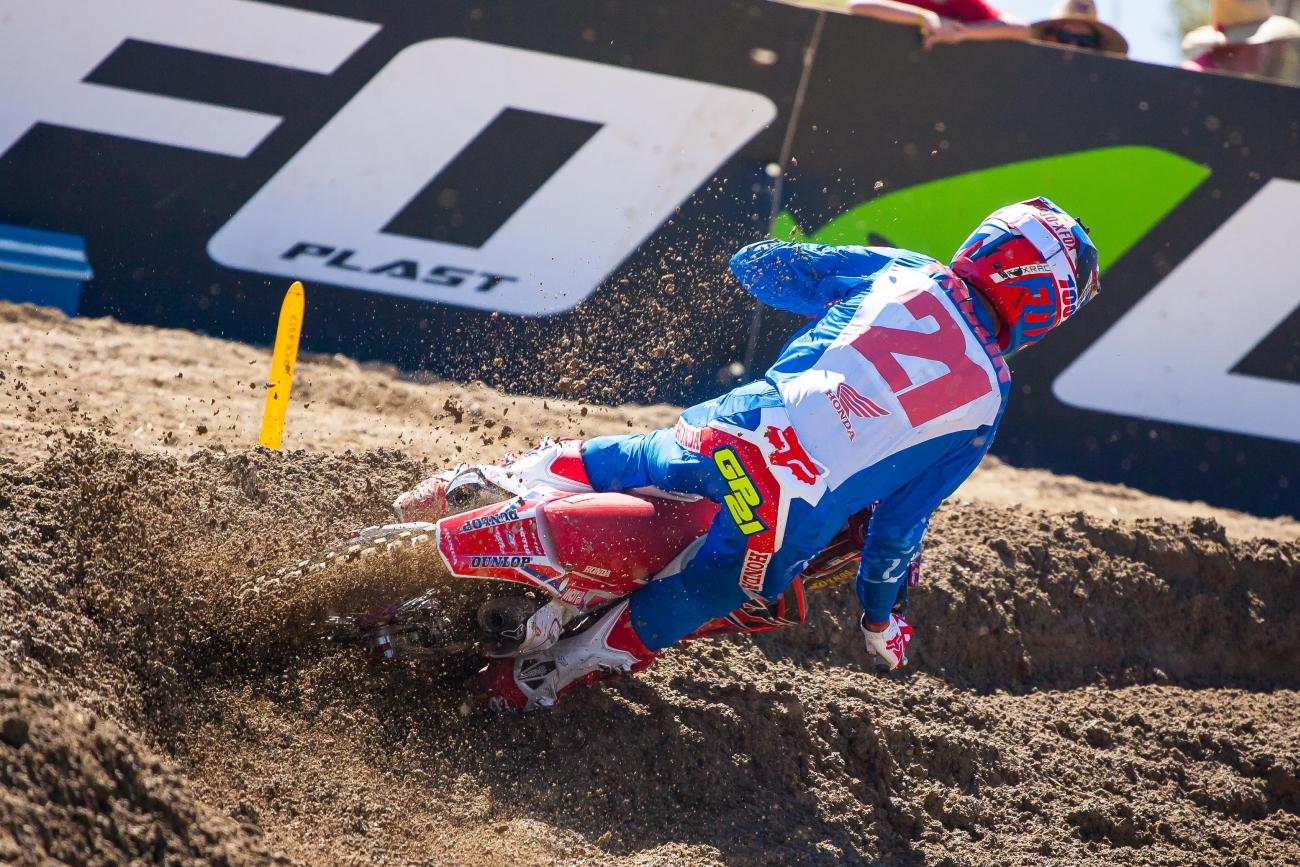 By Jason Weigandt and Chase stallo

So how is this event actually won? Each team sends two riders to the gate in each moto. Moto one is MX2 (250Fs) and MXGP (450s, considered the premier class). Moto two has MX2 and the Open class (also 450s), and moto three features all 450s, with MXGP and Open. Each finishing position is a point (1 point for first, 2 points for second, etc.), and the team with the lowest point total wins the event. Here's a critical part: riders are scored solely on their overall finish. If a 250 rider finishes fifth, the team gets 5 points; it doesn't matter where the other 250 riders finished. In the old days, finishing second amongst the 125s gave you 2 points, even if it was tenth overall. These days, everyone is scored together. –Jason Weigandt

Each team drops one score, so five of six finishes count. Keep this in mind as you try to calculate results during the day. If you're watching the race live on MXGP-TV.com, the scores after the second moto will be way, way off, because, with only four finishes at that point, each team's score will be calculated using all of its finishes. Well, when the team throws the bad result out, things will change drastically. So, before moto three, the best bet is to look at the three best finishes from each team instead of all four. It's a more accurate way to see where things stand. –Weigandt

Saturday’s qualifying races determine gate picks. There will be one moto for each class on Saturday. Each team's best two motos are then calculated to determine Saturday's overall ranking, which becomes Sunday's gate pick order. Since each team sends two riders to the gate in each race, each team gets two gates. The best team from Saturday gets gate choices #1 and #21, the second best gets picks #2 and #22, etc. One huge part of this event is deciding where to start your 250 rider. Down on power, he'll have a tough time getting a start, so do you give him your better gate to help? Do you just assume his start will suck anyway and give the good pick to your 450 rider, who could potentially holeshot and win? This is especially important because GP tracks usually have starts designed to favor better gate picks (which makes Saturday's racing more important) more so than we see here, where holeshots often can come from twenty different gates in the middle. With gate picks being so critical, assume that each team will have one rider with a good start and one rider with a bad start in each moto. –Weigandt

Great Britain was a Shaun-Simpson-snapped-chain away from ending a more-than-decade-long podium drought at the Motocross of Nations last year in Latvia. The country that once won six of the first eight Motocross des Nations hasn’t podiumed since Kurt Nicoll, Mark Eastwood and James Dobb finished third in Nismes, Belgium, in 1997. The streak has nearly ended a few times over the last few years: in 2010, when Dean Wilson led the team to a fourth-place finish—just a point shy of Germany—and again in 2011 when Tommy Searle and company finished 2 points behind Australia. The British tied the USA in points a year ago in Latvia, but the USA won the tiebreaker to finish third. Dean Wilson and Shaun Simpson are back alongside Max Anstie, and on paper, Great Britain is a favorite to break the streak. But, as we’ve seen the last few years, luck hasn’t exactly been on their side. – Chase Stallo

Although they don’t possess the history of Great Britain and Belgium—only two titles in sixty-nine runnings—France has been a verified title contender over the last decade. Led by Gautier Paulin, France captured its second Chamberlain Trophy a year ago in Latvia, and return home as the odds on favorite to repeat. Armed with a red-hot Romain Febvre and 250 Lucas Oil Pro Motocross runner-up Marvin Musquin, France is looking for its first-ever back-to-back Motocross of Nations victories. While Gautier Paulin’s production dropped off in 2015, his first year with Honda, he did finish second in MXGP behind country mate Febvre. The pressure is squarely on the shoulders of the French to produce a title at home—will they come through? –Stallo

Team USA is in the midst of a three-year losing streak at the Motocross of Nations, marking the first time since 1997-1999 that the United States has lost three consecutive years. (We didn’t send teams in 2001 and 2002.) Roger DeCoster changed things up this year, picking the younger Cooper Webb over 450 regulars Jason Anderson or Blake Baggett. Webb is the first full-time 250 rider to make the jump to the 450 for Team USA since Justin Barcia in 2012. Webb used the MXGP of USA at Glen Helen last weekend as a test run on the 450 and performed admirably to secure third overall. France, however, will be different. The track, the overwhelming European gate (most of whom Webb isn’t accustomed to racing with), and the step onto the world stage for the first time will be obstacles for Webb to overcome. Webb has ridden and performed well in other countries—Japan, France—and his general demeanor leads you to think he won’t be rattled by much. Jeremy Martin said in the press conference this morning that year two feels much better now that he knows what to expect. This will be Barcia’s third term, but first as team captain. Will the boys bring the Chamberlain Trophy back home this weekend? – Stallo

Only a handful of countries—France, Great Britain, the United States, Italy, and Australia—can afford to lose talents such as Clement Desalle and Kevin Strijbos and still field a team that could foreseeably win the overall. Belgium falls into the category, as veteran Ken de Dycker will fill the void left by Strijbos. (Desalle was injured early in the season and wasn’t selected on the initial roster.) Jeremy Van Horebeek’s coming off a down year, but tends to perform well on the big stage. Aside from a thirty-eighth-place finish in a moto in 2012, Van Horebeek hasn’t finished outside the top ten, which included a 2-4 performance last year. The health of de Dycker (he missed the last eight rounds of the FIM World Motocross Championship) and the performance of Julien Lieber in MX2 will go a long way in telling the Belgian story in 2015.  – Stallo

For more than a decade, Tanel Leok has led Estonia to prominence on the world stage. Every year seems like it will finally be the year that age catches up with the veteran, but then he carries the small northern European country on his back and into the top ten. The team has four straight top-ten appearances, and Leok has gone 6-12-24-6-17 during that span. The last time the MXoN was held at Ernee—2005—Leok led the team to a sixth-place finish. Is another top-ten in the cards for the team and Leok this weekend? – Chase Stallo

It’s easy to look at the entry list and glance over the big names without really grasping the head-to-head portion of the event. For example: Great Britain’s Tommy Searle went 8-4 last year, but actually won the MX2 overall. So if you’re rating your team’s chances, you have to see whom they have to race against. Let’s take a look at this weekend’s head-to-head matchups from the expected title contenders.

Whether through injuries, lack of experience, or another deterring factor, not every country is able to field a strong three-man team. Yet, every year, new heroes emerge after amazing individual performances. Germany is without Ken Roczen, so while they are expected to be a top-five team, a win is probably out of the question. Don’t count out Max Nagl from logging a strong individual ride, though; he was leading the MXGP class before breaking his ankle, and although he hasn’t been 100 percent since his return, he could challenge for an individual championship. Russia is without two of its stars this year— Aleksandr Tonkov, Vsevolod Brylyakov—but Russian Bob (Evgeny Bobryshev) is back and could challenge for an overall. Ben Townley, who is supposed to be retired, looked great in a warm-up at the USGP last weekend. Also, keep an eye on new FIM MX2 World Champion Tim Gajser and his move to the 450 for a second straight year. Gajser qualified third in the Open class last year, before withdrawing with injury. If Slovenia makes the A final, look for Gajser to challenge for the Open overall. – Stallo