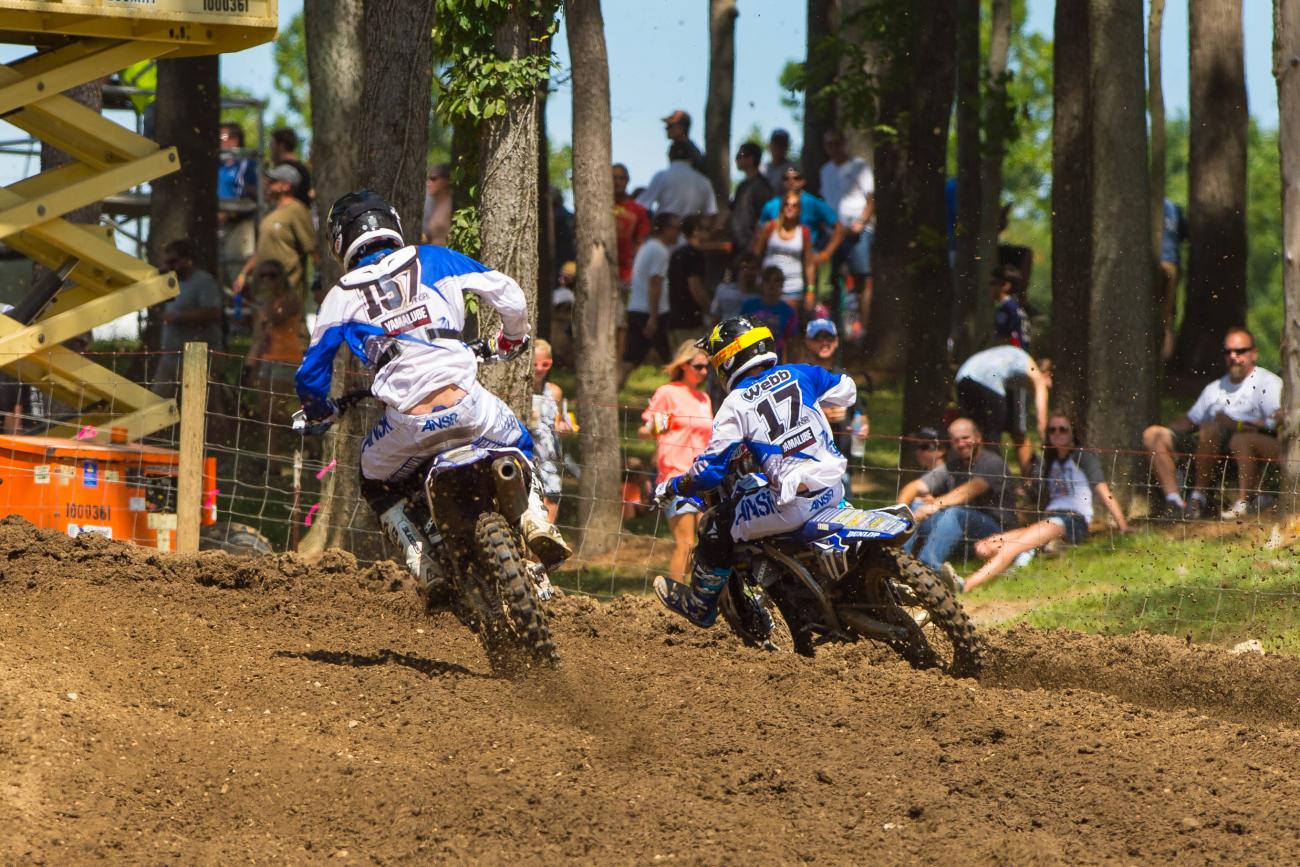 On Saturday afternoon, an interesting situation arose during the first 250 moto. At the start of the day, points leader Jeremy Martin held a 2-point margin over Red Bull KTM’s Marvin Musquin. The series had gone back and forth all summer and it was anyone’s guess as to who would leave with the big #1 on his back. But there was a chance Martin’s Yamalube/Star Racing Yamaha teammates would tip the balance in his favor, because the team has had multiple riders vying for podium finishes recently. It would be a tough task for Musquin to fend off the entire crew and win the title. Yet, that was exactly what he set out to do.

As the first moto got underway, both Martin and Musquin were in decent position and looking to get to the front. That would be short lived, as Musquin suffered a mechanical failure (thought to be a fuel pump) and would bow out early. On the track, championship points were still up for grabs, though, and three Yamalube/Star Racing Yamaha riders were out front and looking good. Cooper Webb was leading and being chased initially by Martin and Aaron Plessinger until Plessinger made a surprise move around his teammate to get into second. Still, as the three riders were circulating around in a wave of blue, everyone with a grasp on basic mathematics was calculating championship points. This is where the interesting scenario unfolded.

With Musquin out of the moto, Martin could have clinched the title with a moto win. With 25 points paid for a moto win, he would have entered moto two with a 27-point lead and, therefore, a guaranteed championship. Unfortunately for Martin, however, he was losing too much ground on both Plessinger and Webb to fight for the lead position.

So, in this position, put yourself in team manager Steve Lamson or team owner Bobby Reagan’s shoes. Knowing a moto win seals the deal, do you try to communicate that to the riders and get Martin back to the front? That’s where the ethics of team tactics get a bit blurry. How far is too far when it comes to impacting the championship? It Utah, Webb moved over when Martin was right behind him, but here, Webb held an 11-second lead over Martin at one point. Is it worth slowing a rider down that much? That is a question that can only be answered by the teams in play.

How could they have enacted that plan if they wanted to?  Getting the “slow down, let J-Mart by” message across would not be easy, but with the amount of team personnel around the track, I think it would be possible. The pit board would of course play a big role in explaining the situation, but using other personnel to slow them down could be pivotal as well. Surely Webb and Plessinger knew the title was on the line, so they would be wary of Martin’s position to begin with. It would have been a difficult ploy to enact, but I do think doable. The real wild card in the whole plan was Lucas Oil/Troy Lee Designs Jessy Nelson, of course on a KTM as fate would have it, who ultimately caught and passed Martin for third. He foiled any chance for a Yamaha coup, but for fifteen long minutes, it was a tempting option.

In the end, the Yamaha boys chose not to interfere at all, leaving it up to Jeremy to win it in the second moto. Honestly, I’m not sure what the best decision would have been. Championships are so valuable and rare, so I tend to feel that any way to secure that in moto one would have been wise. The same freak incident that plagued Musquin could have struck Jeremy Martin in the second moto. In fact, Martin even tipped over on the opening lap of moto two, opening the door to disaster. A crash, mistake, or even something out of Jeremy’s control could have thrown the ball right back into Musquin’s court. Removing that chance had to be an attractive option on the Yamaha team headsets. Paying Webb and Plessinger their bonuses for letting Martin around would be money well spent, and it could have still (had Nelson not charged up to the fray) been a Yamaha sweep on the podium.

The real question is how it would be viewed by the racing world at large. Would Yamaha be crossing the line? The “let Brock bye” pit board signal still resonates with race fans decades later. Would this be another controversial move that would overshadow Martin’s hard-fought title? That would be unfortunate, as I feel Martin, with or without his teammates’ help, won this title with his own hard work and determination.

Between Webb making life easier for Martin in Utah and the possibilities discussed above, team tactics were a real topic of conversation in this championship, more so than in recent memory. The first-moto dilemma was a microcosm of the dynamic that Musquin had faced against the sea of blue lately. He didn’t have much of a support team, as Justin Hill struggled much of the summer with injuries. Had Hill been the force we saw at Glen Helen, he could have been in the mix to push the championship back toward the boys in orange if needed. The championship could have really been sitting on a powder keg had both teams come into Indiana with teammates ready to get involved.

As for me, I’m not quite sure where I stand on the issue. I think there is a fine line that shouldn’t be crossed. Moving over for a teammate is completely acceptable, but interfering with the rival isn’t in great taste. Luckily, we didn’t end up having any real controversy at all. Both Marvin Musquin and Jeremy Martin fought valiantly all summer long, and to have that tainted in any way would have been a shame.