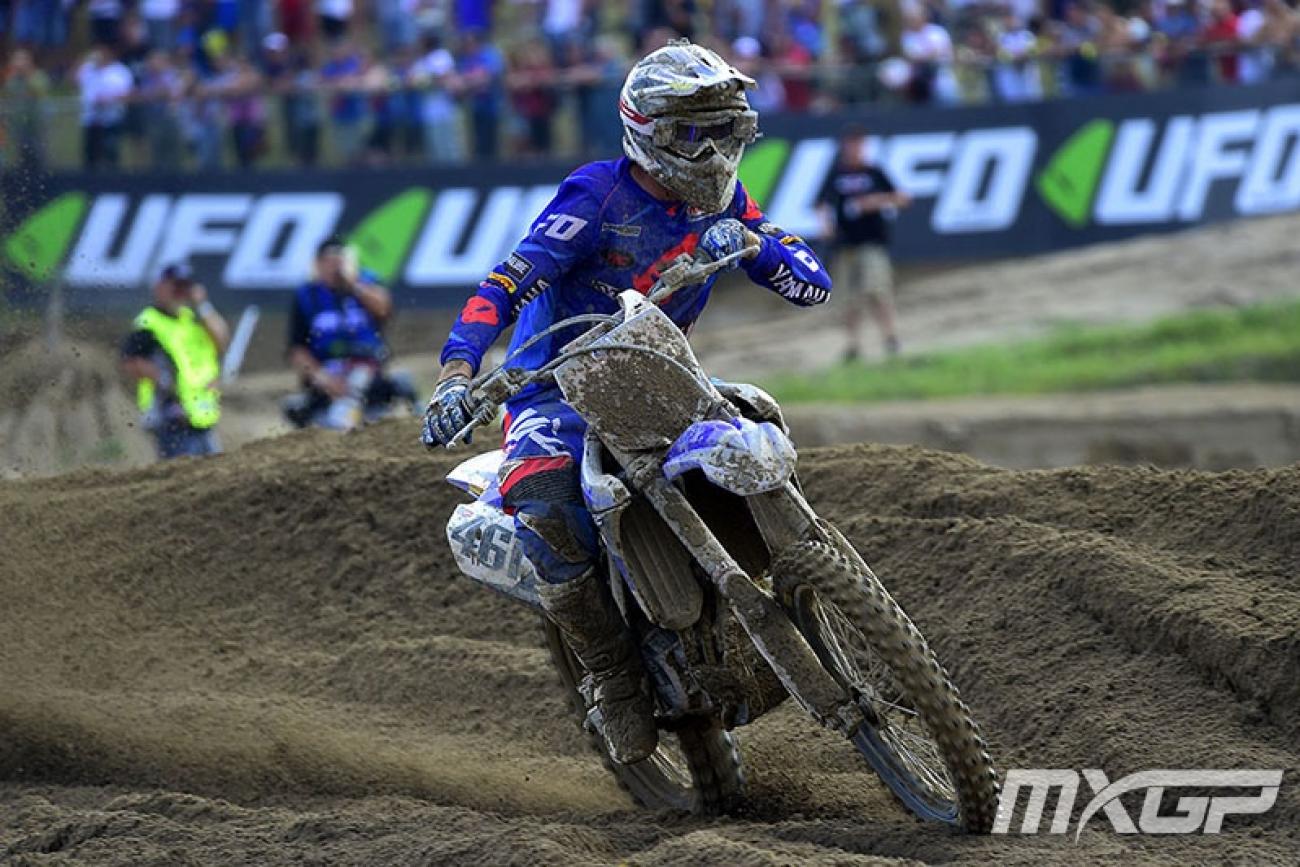 Just three rounds remain in the 2015 FIM World Motocross Championship, and one class is firmly in the home straight while the other will likely go down to the last. And, hopefully, this 250 title will go to the wire without any mechanical trouble in sight….

This weekend in a nutshell? Yamaha Factory Racing Yamalube’s Romain Febvre throwing his imperious cloak over almost all of the premier class with a sixth victory and tenth consecutive podium finish to open up a 101-point gap over HRC’s Gautier Paulin with just 150 left to grab. Monster Energy DRT Kawasaki’s Max Anstie earning his third shutout of the season and emerging as a (greenish) dark horse in the narrowing four-rider grapple for the 250 crown.

The hastily arranged Grand Prix of Lombardia—MXGP’s third visit to Italy this year—was an easy fix for the hole in the calendar left by the cancelled trip to Brazil. The compact and flat Mantova course always provides a supercross “feel” due to its location in a park in the town center, shallow spectator banking around the periphery of the course, and the relentless nature of the jumps. This was not sand like Lommel, but the Grand Prix did benefit from the “normal” racing timetable that involved only the principal MXGP and MX2 divisions without a heavy schedule of European Championship support categories.

“Without the European riders, the bumps are much faster and safer for us,” said the returning Red Bull IceOne Husqvarna rider Max Nagl, who managed to take pole position on Saturday but admitted he was lacking fitness after just five days of riding in recovery from a broken ankle in June.

“The track is unbelievably good. It has been prepared well by being ripped and watered, and there are three or four lines every corner,” the German added.

A slightly more laidback Grand Prix then, but the injury list continued to thrive. Rockstar Suzuki found themselves without a rider on full works machinery, as a heavy landing by Kevin Strijbos on Saturday led to a broken right thumb ligament and ended the Belgian’s season (that’s also a blow to the Belgian Motocross of Nations effort). With Clement Desalle recovering from an injured shoulder, Glenn Coldenhoff was the only Suzuki rider, and the Dutchman—who is rumoured to be on his way to Red Bull KTM for 2016—placed sixth overall on Sunday. MX2 World Champion Jordi Tixier crashed and dislocated his right wrist and also, painfully, waved goodbye to 2015. The Frenchman’s imminent operation reduced the list of contenders in MX2. Then there was the mistake and fall from Monster Energy Kawasaki’s Steven Frossard in the opening phases of the MXGP moto that required the Motocross of Nations winner to be helicoptered from the circuit for an alleged procedure on a fractured vertebra.

The search and anguish over the attrition level of MXGP go on with fingers pointed at the bikes, the tracks and even the riders Some regulatory action is coming in the near future, but where it will be directed is anybody’s guess. Tixier crashed on a 250, not a 450. Mantova was not battered by countless sessions on the track and a lack of maintenance time or resources. That leaves the riders then, and who is going to tell an ambitious and dedicated athlete not to push the envelope? This one will rumble on, but there is a desire to find some sort of fix.

Someone comfortably edging boundaries is Febvre. The 23-year-old has barely shown a sign of weakness for four months, and his dispatch of Evgeny Bobryshev (back on the podium for the third time this year and still capable of demoting teammate Paulin, who again failed to shine while also failing to totally drop the ball) in the first moto was swift. In the second race, he sprinted clear of teammate Jeremy Van Horebeek to head a Yamaha 1-2 for the second time this season.

“We are getting close now to the end [of the season] and the title can be won next weekend,” he smiled. “We will see. I think next weekend will be even sandier and it will be easy to make a mistake. We need to stay on two wheels and keep pushing.”

Hitachi Construction Machinery Revo KTM’s Shaun Simpson was given a works 2016 450SX-F to substitute the ’15 model he had been using thanks to his progress this season, led by the GP win at Lommel and decent showing in New York at the Unadilla National. There were plenty of bikes to spare, with Red Bull KTM decimated through injury and just one of their six-rider roster in action across both classes. The Scot had just recovered from illness coming into the round, and it caught him in the first moto where he tired in the last two laps and was passed by Van Horebeek and Paulin. He was dogged in the second outing, however, and took a decent third position on a bike he’s barely ridden while dealing with attention from Bobryshev, Nagl, Coldenhoff, and Paulin. Simpson’s fourth overall was good enough for top five in the MXGP championship standings, and with Tony Cairoli likely to miss the coming two meetings and only return for Glen Helen, the British Champion is just 25 points from a lofty fourth. Simpson gained fifth and a few more points over Nagl thanks to the German’s last-lap fall in the second moto that bumped him from fifth to tenth.

In MX2, Anstie was as resolute as Febvre—only a brief first-moto fall blotting his day—but a deeper story in the competition involved Red Bull KTM’s Pauls Jonass (aping teammate Jeffrey Herlings in the best way by leading the championship at the age of 18 in just his first term as a works rider and full-time in MX2) and HRC Gariboldi’s Tim Gajser. The latter enjoyed some noisy support from a large Italian fan club and a hoard of Slovenians that dropped down across the border to cheer on #243. The teenagers sandwiched Anstie on the box and kept the distance between each other to 4 points, scratching another event from the list and cranking up the tension a notch further. Jonass was consistent, Gajser attacking after also crashing like Anstie and suffering a bad start in the second moto.

A thought spared for the Swiss. Rockstar Suzuki’s Jeremy Seewer went down in both motos. The second involved a spectacular multi-rider pileup on the start straight that caught countryman and Standing Construct Yamaha Yamalube rider Valentin Guillod. Seewer, a three-time GP winner this year, had also fallen from the leading group to fifth (eventually fourth) in the first moto, and while recovering to the top ten in the second, had an epic crash trying to scrub the largest leap on the track. He somehow picked up a mangled YZ250F—unhurt—to continue. With his DNF in the second outing in Belgium three weeks prior and more damage to his points in Italy, the 42-point gap to Jonass might now be too much to bridge.

A name to watch is former double Junior World Champ Brian Hsu. The teenage German made his GP debut with an eye-catching eighth place in the first moto on the Rockstar Suzuki. He too was a victim of the incident at the start of the second sprint, and a wrecked RM-Z250 ended any chance of a memorable overall classification. The diminutive athlete—contesting the EMX250 European Championship and riding a 250F for the first time this year—is stylish and still growing.

From Italy to Assen. The famed MotoGP facility will host its first GP with an elaborate temporary construction across a section of the historic asphalt. Round sixteen takes place this coming weekend before MXGP boxes up for the Americas in September.