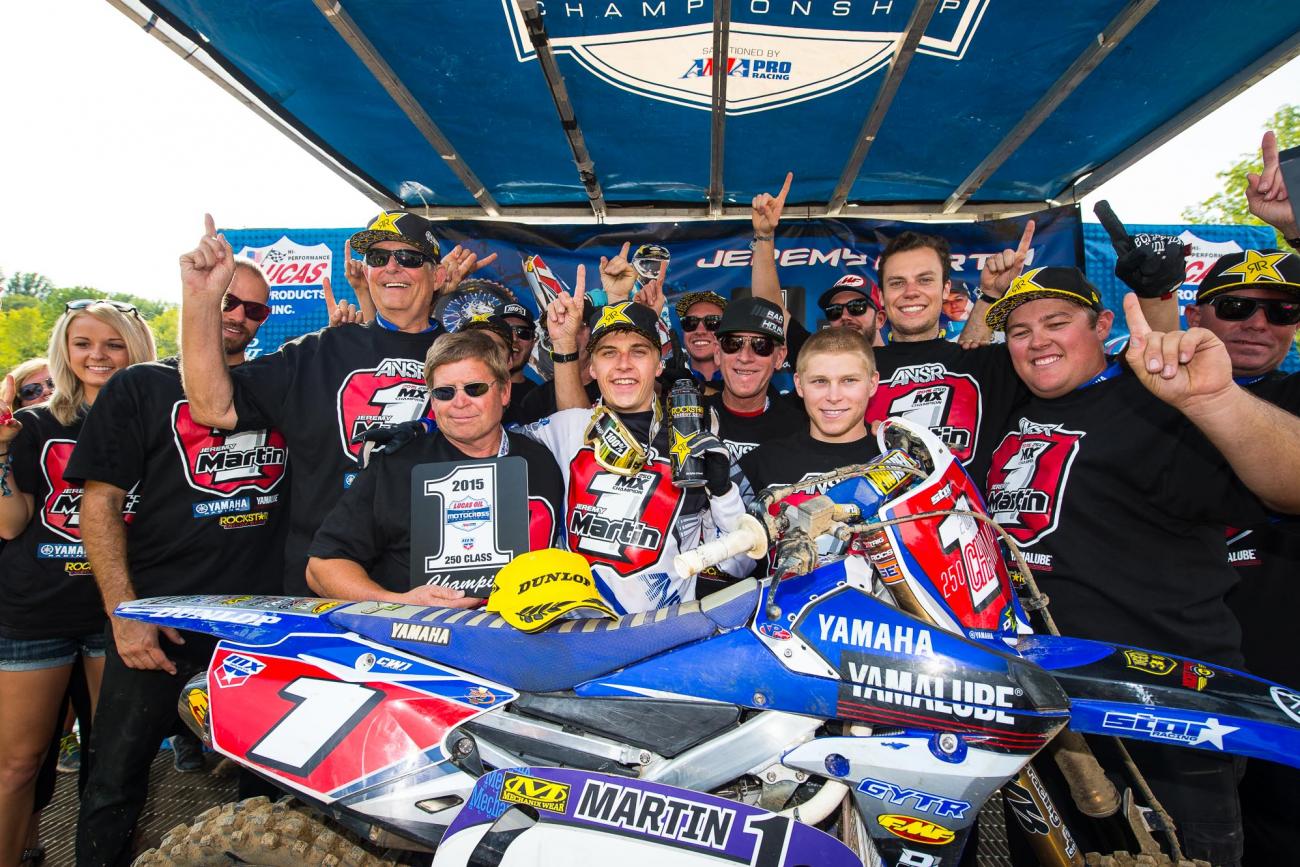 A day that began with so much intrigue and speculation and innuendo, ended the way it did here a little over 365 days ago—with Jeremy Martin holding the number 1 plate, albeit a little drier.

It was a perfect day for the defending champion, who admitted he “settled in” after getting word that Marvin Musquin had pulled out of the first moto with an mechanical problem, but it was plenty good enough to capture his second championship, becoming the first Yamaha rider since since Broc Glover in 1979 to repeat as 250MX champion.

“What a crazy year. Marvin [Musquin] was really strong this season and pushed me to my limit. He’s a great competitor,” explained Martin. “It was a weird summer. I’d get great starts and good finishes, but I also had trouble at times when Marvin would do well, so it was a constant battle until the end. This year was a much tougher championship to win. It was tough last year, but this was a dogfight all season long and I’m even more proud to end the year on top.”

And what a day for Yamalube/Star Racing Yamaha. Not only did they win their second consecutive 250MX championship—and third major 250 title this year—they also got two moto wins from guys not named Martin. Cooper Webb’s win wasn’t a surprise—he’s won two motos prior since returning—and maybe Aaron Plessinger’s second moto win shouldn’t have been either, as he’s been on the podium twice since Spring Creek (overall and moto) over the last few rounds. Plessinger grew up around the area and his dad, Scott, even won at the Ironman, albeit the GNCC version.

“This is amazing. I only live about two-and-a-half hours from here [in Ohio],” said Plessinger. “I was able to charge hard in both motos and it ended out working really well for me in the end. Today was a great learning experience. I’m just a rookie but I have many years ahead of me and I’m looking forward to continue improving.”

Oh, what could have been for Marvin Musquin. No one wanted his brilliant championship season to come to an end this way, especially when it looked certain that he and Martin would battle in the first moto as the two started nearly side-by-side. But earlier in the first moto, Musquin’s bike let go, ending his championship run. He did rebound in the second moto to capture third, but the championship belonged to Martin.

“It’s unfortunate that we had the mechanical issue in the first moto,” stated Musquin in a team statement. “It is something we would have never expected to happen but that is part of racing. This was still the best year of my career and I am really proud of myself and my team for our accomplishment. I am looking forward to moving up to the 450 for next year.”

As for Cooper Webb, winner of the first moto, he crashed on the uphill triple early in the second moto and was unable to finish.

Joey Savatgy rebounded from a tough Utah, to capture third, and nearly snagged his first career moto win. After the race, Savatgy said he was disappointed in the result. “Frustrated is a understatement.... Let that Moto win slip by... Congrats to AP on a killer ride,” he wrote on Twitter.

Jessy Nelson, who won a moto here a season ago, nearly came away with the overall as well, as he held a sizable gap in the second moto. The track bit him late in the race while was out in front by himself. In the post-race press conference he said he wasn’t sure what happened, but that it kind of rattled him. He went on to finish sixth and third overall on the day.

Ryan Dungey, despite wrapping up the championship last week, despite five straight motos, still came out and put on a dominating performance early in the day, taking the Bud Light Fastest Qualifier and a putting together a dominating win in the first moto by over fifteen seconds. Dungey said post-race that he thought it was important to not be complacent after winning the title. In the second moto, Dungey had an un-Dungey-like fall and had to work back to second, which was still good enough for the overall.

“We were running fourth at the beginning [of Moto 2], so it’s a little tougher to take the lines you want when you aren’t out front. I hit a little bump and it caused a little tip over, so I just got back up and put my head down the rest of the moto,” said Dungey. “We were able to make up the ground we needed to get the win and end the season the way we wanted. It’s been a great year and I’m excited for what lies ahead.”

“The track was gnarly out there, probably one of the toughest of the year. It feels great to end the season this way,” said Roczen. “I knew we had the ability to get into second in the championship and we came out here and did that. I was confident coming into the day because the bike’s been great and we did what we needed to do.”

Justin Barica, who entered the weekend second in the championship, fell just shy of the podium, fourth overall. “It was a tough day. I had a big crash in practice, but no excuses,” explained Barcia. “I rode as hard as I could all day long and today that put us in fourth. I’m so proud of the entire JGR [Joe Gibbs Racing Motocross] team and everything we’ve accomplished this season. It’s been a memorable year.”

Jason Anderson finished his 450 rookie season strong, taking the final spot on the podium. He said post-race it was important to finish all twelve rounds his first season and finish strong after some set-backs mid-season. Anderson said he rode the new Husky briefly and that he “wished he hadn’t” because it felt so good.