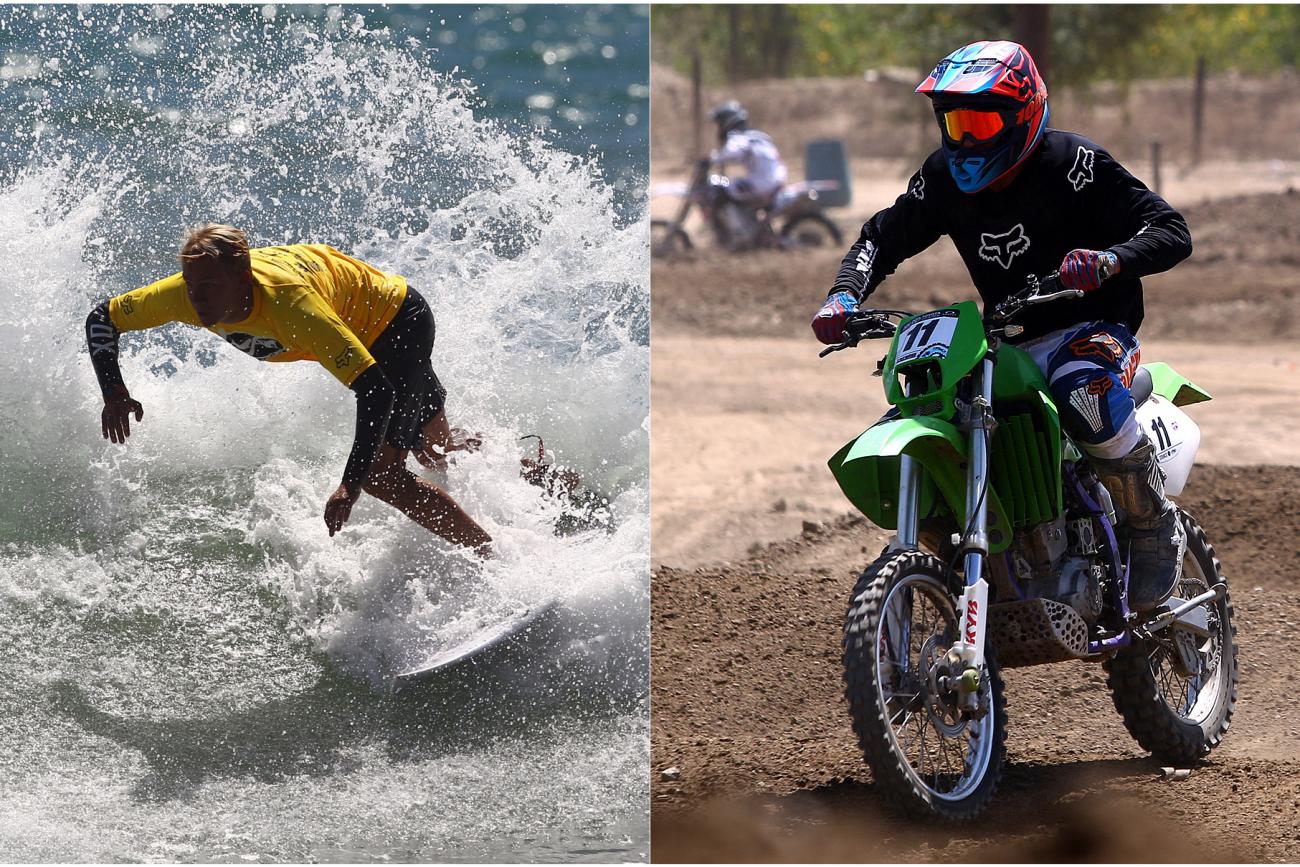 I've been a part of Surfercross since its inception seventeen years ago. I've missed it a few times over the years, but if I'm in town it is definitely on the schedule. And it isn't just the free lunches provided gratis by Wahoo's Fish Tacos and Wienerschnitzel that keep me coming back; it's the vibe in the pits and on the beach that make this one of the best events of year.

AutoTrader.com/Toyota/JGR Yamaha team manager Jeremy Albrecht started this gathering with his pro surfer pal and big wave legend, Mike "Snips" Parsons. They wanted to start an event that brought world-class surfers and motocross racers together for a crossover competition that blended their two favorite sports. The list of athletes who have competed in Surfercross over the years is impressive. Surfers including Sunny Garcia, Kalani Robb, Rob Machado, Brad Gerlach, and a host of other World Championship Tour surfers have all joined in on the fun. Champions like Jeff Emig, Jeremy McGrath, Greg Albertyn, and dozens of other moto legends have taken part as well.

Teams are drawn from a hat, and from that point on it's up to rider and surfer to make a strategy. Some of the best surfers don't ride well and some of the best riders can barely swim. It makes for an interesting mix of results, and you truly can't pick a winner until the final surf heat is finished. There is also an industry class for those who lacked the talent to succeed on a professional level in either sport. Sorry if that seemed a bit harsh—I guess the unrelenting heckling from announcers Cameron Steele and Dan McGranahan is rubbing off on me. A guy from the surf industry is partnered with a moto industry guy, and they try to out-ride/surf their counterparts.

This year, the duo of former national champion Mike Brown and surf star Josh Sleigh dominated the moto day. Brownie and Sleigh got out to early leads in both motos and were never really challenged. The next-best team included surfing legend Sunny Garcia and a washed-up, old moto journalist who puts out fires now; that would be me. Garcia and Sleigh had a good battle for a couple laps, but we couldn't match the pace of the leaders. We finished 2-2 behind their 1-1, and the duo of Ryan Sakal and Justin Mulford rounded out the pro podium on moto day. The guys from Stance hosted a barbecue after the motos finished, and there may or may not have been a few beers consumed. Things didn't get too wild, though, because the surfing started early the next day.

There are two things that can make or break this event. One is a track that has unforgiving obstacles that get the surfers hurt. There have been a couple incidents in the past where really good surfers who were WCT guys got hurt and missed contests. That is no bueno for them or their sponsors or anybody involved. This year, the track was prepped with safety in mind, and, to my knowledge, not one person was physically injured. The same can't be said for feeling or egos, but that's how it goes. The other thing that makes it or breaks it is the surf conditions the second day. About ten years ago there was a pretty big swell that came through, and most of the motocross guys couldn't even get out past the breakers to the lineup. The pro surf guys had fun, but the dirt bike dorks were crapping their pants all day, and it spoiled the vibe a little bit.

As soon as we crested the hill that drops down to Trail 6 in San Onofre, I knew it was going to be a great day. The sun was shining and the water was glassy with nice little rollers coming through. It was small, but there were waves, and that meant everybody could catch something. Guys like South Africa's Dylan Lightfoot, Josh Sleigh, Kalani Robb, and Sunny Garcia were ripping and putting on a show for those on the beach. Watching those guys from the lineup is even better; you just see them building speed as they work down the line and occasionally snap a turn off the lip, sending a shower of water off the back of the wave. I caught myself watching those guys ride waves in instead of looking for one myself.

The industry class was busy battling for the coveted overall, and in the end it was the duo of Ryan Fedorow and Terry Beal who snagged the overall. Both guys are really rooted in the moto world, so we'll just call that a win for our side.

When the pro surf final was all said and done, the results were closer than they'd ever been. In fact, there was a three-way tie for the overall. Brown/Sleigh finished 1-6, Pingree/Garcia went 2-5, and Sakal/Mulford finished 3-4, which left each team with 3 points. Any time there is a tie, your best overall result from either day is used to break the tie, and that meant Brownie and Josh Sleigh had both won their first Surfercross event. Sunny and I finished second, with Sakal and Mulford in third. Trophies were handed out, a little friendly trash talk was shouted back and forth, and then the EZ Ups started getting torn down until next summer.

The talk right away was that this was the best Surfercross that they'd ever had. The vibe was good and the support from companies like Toyota, Stance, Fox, and Oakley was incredible. All of those companies brought out product for riders to use, gave away bags of swag, and helped offset the cost of the event. I know Jeremy Albrecht and his wife don't make any money doing this, and I know it is a long, stressful ordeal for them, but I hope they know how much fun this is for all of us who get to meet up once a year and ride and surf together. It truly is one of the best events of the year. Thanks to Jeremy and all of the sponsors for supporting an amazing event.