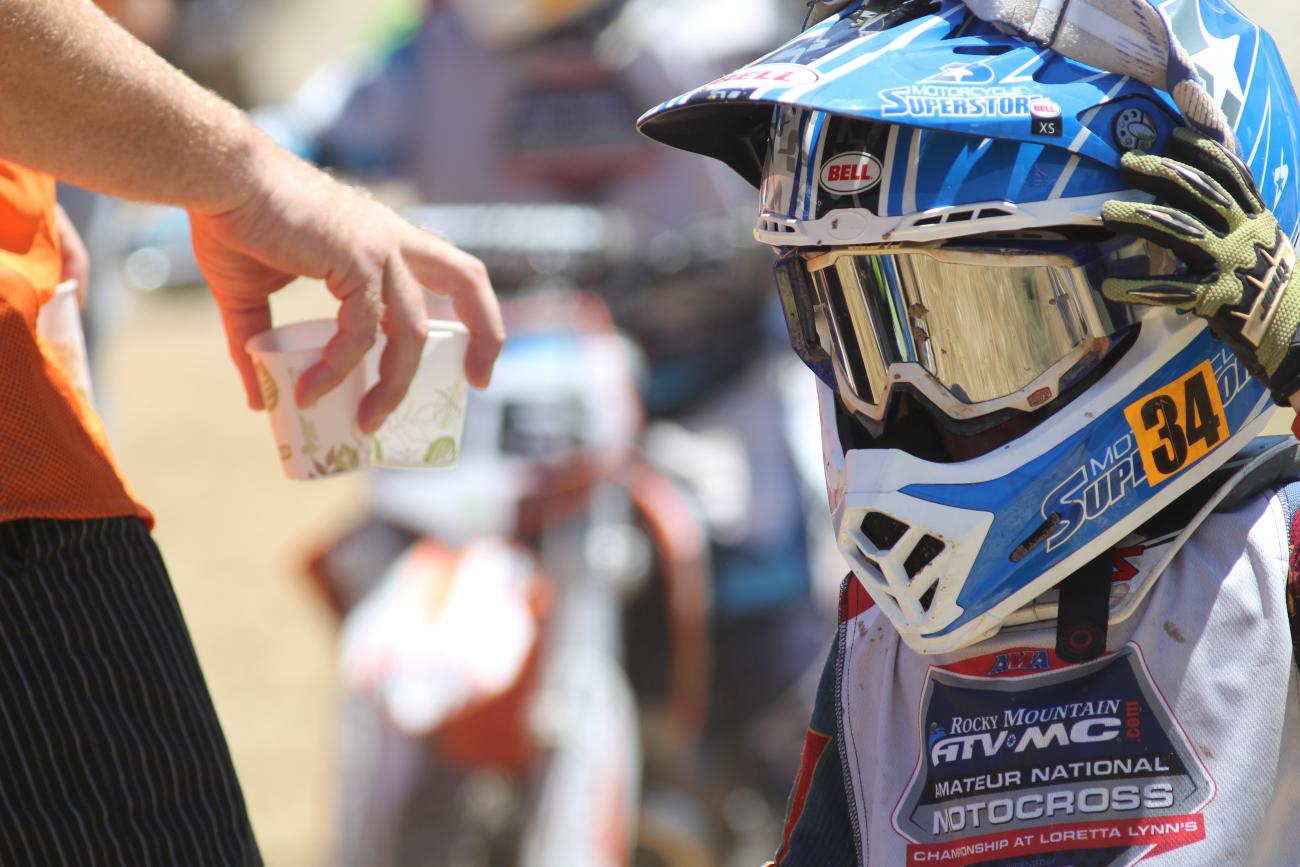 Entering the 34th Annual Rocky Mountain ATV/MC Amateur National Motocross Championship presented by AMSOIL, there was plenty of buzz around where highly touted amateur prospects such as Austin Forkner, Chase Sexton, Garrett Marchbanks, among others, would sign for future pro contracts. Today, at Loretta Lynn’s, we got one major question answered, as Forkner announced on the podium after his Schoolboy 2 (13-16) B/C win that he had signed a four year deal with Monster Energy/Pro Circuit Kawasaki. He later told us the plan is to do Daytona Amateur Supercross and another spring national before turning pro at Hangtown in 2016. We also hear that current Yamaha rider, Sexton, has a deal locked up with GEICO Honda, but nothing official has been announced.

On the track, Forkner got it done as well, adding to his 250 B title, which he locked up on Friday, with that Schoolboy win. He was later awarded AMA Motocross Amateur Rider Award, which recognizes the most outstanding non-A-class rider.

The highly coveted AMA Horizon Award came down to the wire, with as many as seven riders all having a shot. Last year’s AMA Motocross Amateur Rider recipient, Tristan Charboneau, was looking to throw his hat in the ring as well, as he led the opening laps of 450 A with a shot at the overall. But during a hotly contest battle with Bradley Taft and Josh Osby, the GEICO Honda rider suffered a mechanical, ending his day. Taft went on to claim the overall.

Marchbanks, who grew up in Utah, but now trains at Club MX in South Carolina, didn’t disappoint, either, capturing his second Super Mini title today in Super Mini 2 (13-16) over Austin Black.

History was made today at the Ranch, as Bakersfield, California’s, Jett Reynolds put the finishing touches on perfect weekend in 85cc. Reynolds became the first rider to win consecutive titles in 51cc, 65cc and 85cc. Reynolds now has six Loretta Lynn titles and still several more years to go on minicycles. He’s still young enough to be racing in the 65cc class!

For more for the final day at the Ranch, check out the MX Sports press release below.

The 34th Annual Rocky Mountain ATV/MC Amateur National Motocross Championship presented by AMSOIL came to a conclusion today with the fifth and final day of racing in Hurricane Mills, Tennessee. The last 17 races took place on the distinguished facility of Loretta Lynn Ranch, and there were a total of thirty-eight National Championships bestowed and four AMA specialty awards.

The coveted AMA Horizon Award is given to the A rider who shows the most promise as they prepare to enter the professional ranks. It was awarded to Yamaha's Benny Bloss who won the Open Pro Sport and finished third overall in 450 A. The newly crowned AMA Horizon Award winner plans to compete in the upcoming round of the Lucas Oil Pro Motocross Championship at Unadilla in New Berlin, N.Y.

The AMA Motocross Youth Rider Award goes to a rider under the age of 16 chosen for his or her performance in the youth classes at Loretta Lynn Nationals. Youth riders who also participate in amateur classes will be considered, but only their youth class will be factored into the final decision. This year's recipient in the Youth division was Jett Reynolds, who swept all six motos in 85cc (9-11) and 85cc (9-11) Limited.

The AMA Motocross Amateur Rider Award is designed to recognize an outstanding non-A-class rider at the Loretta Lynn National who is ready to make an immediate impact in the A-class competition. This year's recipient, Austin Forkner, plans to turn professional at the 2016 Lucas Oil Pro Motocross season opener at Hangtown. Forkner finished first in 250 B and Schoolboy 2 (13-16) B/C.

The AMA Motocross Vet/Senior Rider Award acknowledges an outstanding rider over the age of 30 at the AMA Motocross National Championships. Results from all Vet classes are taken into consideration in selecting the winner. In an ultra-competitive division, Sebastian Tortelli proved to be a front-runner by capturing the Vet 35+ (2-1-1) title over Robbie Reynard (1-2-2). Tortelli finished second to Ricky Renner in 25 +, with Renner taking that title for the second-straight year. Renner wasn’t alone in repeating. John Grewe won the Senior 45+ title for the second-straight year, topping Barry Carsten, and Earl May won the Master 50+ to match his 2014 triumph, with Rodney Smith once again following home.

California added another State Championship award to the books by having the most racers out of any other state in the country to win the overall titles.

Tristan Charboneau, the 2014 AMA Motocross Amateur Rider award winner, had the fastest lap time of the week running a 1:53.547 and was leading in the 450 A championship, but unfortunately suffered a mechanical issue and DNF in the last moto opening up the number one spot. Bradley Taft (3-1-2) was right behind him and moved forward to take the title, with Josh Osby winning the moto. Darian Sanayei (2-3-6) and Benny Bloss (4-5-3) rounded out the podium.

Saturday's finale showcased some of the most exciting battles of the week, which included Justin Cooper adding to his College (16-24) championship, by sweeping every moto in Two-Stroke (16+) and College (16-24).

250 B Limited was jam-packed with good racing, but it ended up being Joey Crown claiming first with 3-1-1 finishes followed by Michael Mosiman (4-3-2) in second and Cole Barbieri (7-4-3) in third.

RacerTV.com provided over 40 hours of LIVE stream coverage of racing throughout the week and the archived footage is now available for viewing HERE. Complete results from the 2015 National Championship can be found HERE. For more information, visit the series official website at www.mxsports.com or call (304) 284-0084.

Please see below for the top 100 fastest lap times during the weeklong National.