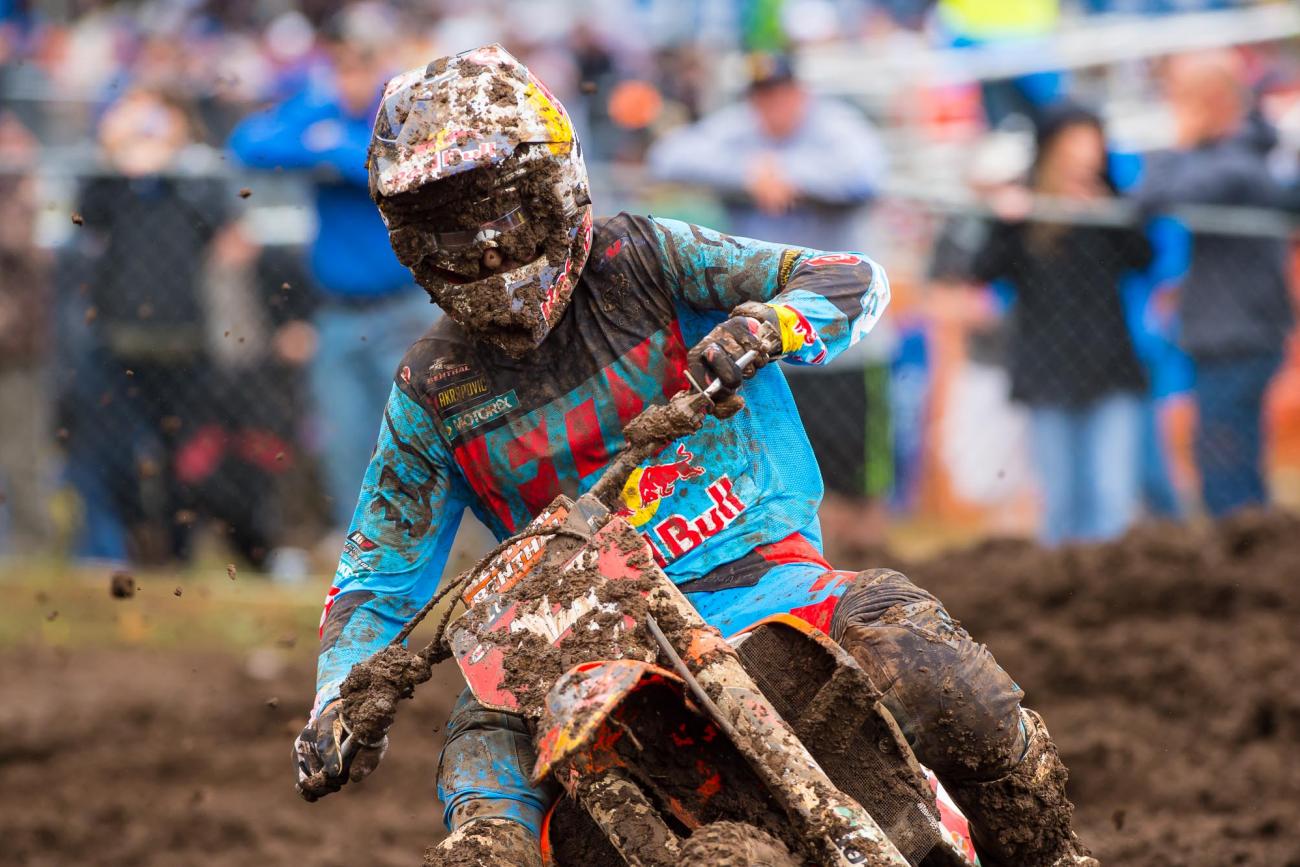 In motocross adverse weather can be a points leader's worst enemy. There's just no telling what might happen when the rain comes down, and when it started to fall this morning at the Peterson Cat Washougal National, the immediate question was whether or not it would shake up the point standings. So did it? Let's jump into the Race Day Feed to find out. To see how things went in chronological order, start with the Morning Report at the bottom. Otherwise read on to go straight to the motos.

The rain started coming down before this moto and continued for a while after the gate dropped, which resulted in riders getting covered in mud and ditching goggles very early. Most of the riders were so covered in mud less than a lap into it you couldn’t even see their front or side number plates! That didn’t apply to Christian Craig though, who took off with the lead and proceeded to gap the field. At one point he had nearly ten seconds on everyone, but then a small tip-over handed the lead to Cooper Webb. Marvin Musquin was second, and he and Webb put on a ferocious duel, with both of them having off-track moments and run ins with lappers. It lasted a long time too, but on the last lap Webb’s bike started blowing huge amounts of smoke as he was attempting to retake the lead. It held together though and he finished just over two seconds behind Musquin.

Behind them Arnaud Tonus put in a great ride to take third in his first ever Lucas Oil Pro Motocross moto, while Christian Craig took fourth despite having another tip-over. Aaron Plessinger rounded out the top five, while Jeremy Martin overcame a bad start to finish ninth.

Thanks to no more rain, the track was much better for the second moto and when the gate dropped it was Jeremy Martin who shot into the lead, followed by Marvin Musquin and Cooper Webb, who wasted zero time in slicing by Musquin and eventually Martin to take the lead. Martin lost a little time at first, but about halfway through the race he closed back up on Webb and started putting the screws to him. When Webb put what appeared to be a block on Martin’s attempt to pass him, Martin swerved and just went around the outside and roosted off with the lead. He built a gap, but with two laps left he had a little mistake and Webb and Musquin both went by. That handed the overall, and moto win, to Webb. Martin, who came in with a 19-point lead, took fifth overall and now leads Musquin by just four points.

Elsewhere Arnaud Tonus had a good race going, running as high as sixth, but something happened and he ended up twentieth. Aaron Plessinger put in a great ride, going 5-4 four third overall—his first podium finish. Alex Martin had sixth for most of the race but Shane McElrath got him near the end. Still a nice bounce back for A. Martin, who finished fifteenth in the first moto.

No surprises on the start of this one, the Autotrader.com/JGR/Toyota/Yamahas of Justin Barcia and Phil Nicoletti were up front immediately. Barcia managed to edge Nicoletti then proceeded to check out, and in just a few laps he had fifteen seconds over Christophe Pourcel and Ryan Dungey, who spent a good portion of the moto battling over second. About halfway through Dungey made the move but by that time only a big mistake from Barcia would have put Dungey in the fight for the win. Barcia looked like he was having fun in this one, and he even through a few one-legged whips over jumps.

Elsewhere the guys were pretty spread out and there wasn’t a whole lot going on. Ken Roczen got a bad start—he was eleventh after one lap—and had to work through the field. He ended up seventh after getting nipped by a charging Jason Anderson near the end of the race.

There was a scary moment in this one when the red cross flag came out and the 41 of Trey Canard was seen on the dirt at the base of Horsepower Hill, but he was okay and got back in the race.

This just in, the Autotrader.com/JGR/Toyota/Yamaha bikes are fast. As in, double holeshot fast. Justin Barcia nailed yet another holeshot to kick off the second moto, and right behind him were Ryan Dungey and Ken Roczen. The immediate result was a huge battle for the lead between the top three in points, and it seemed that any moment something big was going to happen. Only it didn’t. Ken Roczen started slowly losing touch with Barcia and Dungey, and at about the halfway point Barcia started putting distance between himself and Dungey. Just when it seemed that Barcia had broken Dungey, Barcia made a little mistake, tipped over, and that was that—Dungey took over the lead.

Barcia only had about four seconds to make up on Dungey, and with just a few minutes left in the moto all eyes were on the JGR rider to see if he could turn it into a battle again. He was trying hard, too. Maybe a little too hard because he came out of a corner hard on the gas, appeared to swap a little and nearly went down again. Dungey, whose worse finish at Washougal is a third overall in 2007, went 2-1 for yet another win at a track you could almost say he now owns.

We're just minutes away from the first gate dropping here at Washougal, and the rain is starting to come down yet again. It's still not a heavy rain, but it's falling harder than it has all day and we're getting to the point where we can see some standing water in places. Earlier in the day we talked to the Dunlop Tire crew, and they told us a little bit of water actually helps the dirt here. But if the rain keeps coming it won't be long before the track has more than just a bit of water. Stay tuned, things could get crazy here shortly.

Although the rain has been light here at Washougal, it’s continued to fall, and the second set of qualifiers was significantly slower than the first. Jeremy Martin’s best time was four-and-a-half seconds slower, but a lot of the other guys were eight to ten seconds slower. Martin and Marvin Musquin found each other several times during the second session, but every time one would come up behind the other, whoever was in front would slow down to let the other one by. Whether they didn’t want to show each other any lines, or it’s just simple coincidence, we can’t be sure, but hopefully we’ll get to see it play out in today’s motos.

The 450 times were significantly slower too, except for Ryan Dungey, who managed to lower his time by about a second when most riders were a good five seconds slower. He still qualified thirteenth though, which is not what we’re used to seeing from Dungey. Don’t expect it to hold him back this afternoon. Combined times below.

The first set of qualifiers are done, and thanks to sporadic sprinkles, the times are all over the board. In fact, the fastest twelve 250 riders posted faster lap times than Ken Roczen, who was the fastest 450 qualifier! The times may or may not hold up in the second qualifier, depending on what the weather does.

Ken Roczen topped the 450 field with a  2:12.687, with Trey Canard, who is making his return to racing today, just a tick behind with a 2:12.850. Tommy Hahn was an impressive fourth, while Justin Barcia and Ryan Dungey were tenth and fourteenth. Again, these times are linked to the on-again off-again rain, so be sure to check back soon for a report from the second round of qualifiers.

Practice is just beginning to get under way, so let's briefly go over the most relevant stories before we jump into the practice report.

In the 250 Class the obvious story is the battle for points supremacy between defending champ Jeremy Martin and Marvin Musquin. Martin has been padding his lead lately, but Musquin’s been battling a sore wrist stemming from a big crash at Thunder Valley. If Musquin’s wrist holds up today he could take some points back out of Martin and shrink that 19-point lead—the Frenchman is fast at Washougal and is due for a win. Of course, Martin isn’t the only Yamaha rider he’ll have to go through to get it—Cooper Webb is back on point, taking his first win of the season at Spring Creek after missing several races with an ankle injury.

Speaking of injuries, we’ve got a slew of 250 racers coming off the disabled list this weekend. Martin Davalos, Arnaud Tonus, Michael Leib, and Austin Politelli are all here today.

In 450 action Ryan Dungey has a 56-point lead over Ken Roczen, and no matter what happens this afternoon, he’ll still be going home with the lead. Don’t expect him to give up any points anyway though, The Dunge almost always wins here, and his worst finish ever at Washougal was third in the 250 Class in 2007. The points battle to keep an eye on is between Justin Barcia and defending champ Ken Roczen. Barcia trails Roczen by thirteen points, but he’s been on a roll lately while Roczen seems to be a tick off his usual, blazing pace. There are plenty of other riders—Blake Baggett, Jason Anderson, Christophe Pourcel, Andrew Short, Weston Peick, and Broc Tickle to name a few—who could get in there have a big effect on that battle. Trey Canard is back too, which should be fun to watch.

Finally, the weather. It's been misting heavily (or raining very lightly) all morning, and the top layer of dirt is wet, but the track isn't what you would call muddy. This track is normally quite slick, and one would think the additional moisture would make it even worse, but we had a quick chat with the Dunlop crew this morning and they said a little bit of rain actually makes this dirt better. They also said that no matter how much rain falls, this is one track where they won't be using mud/rain tires.