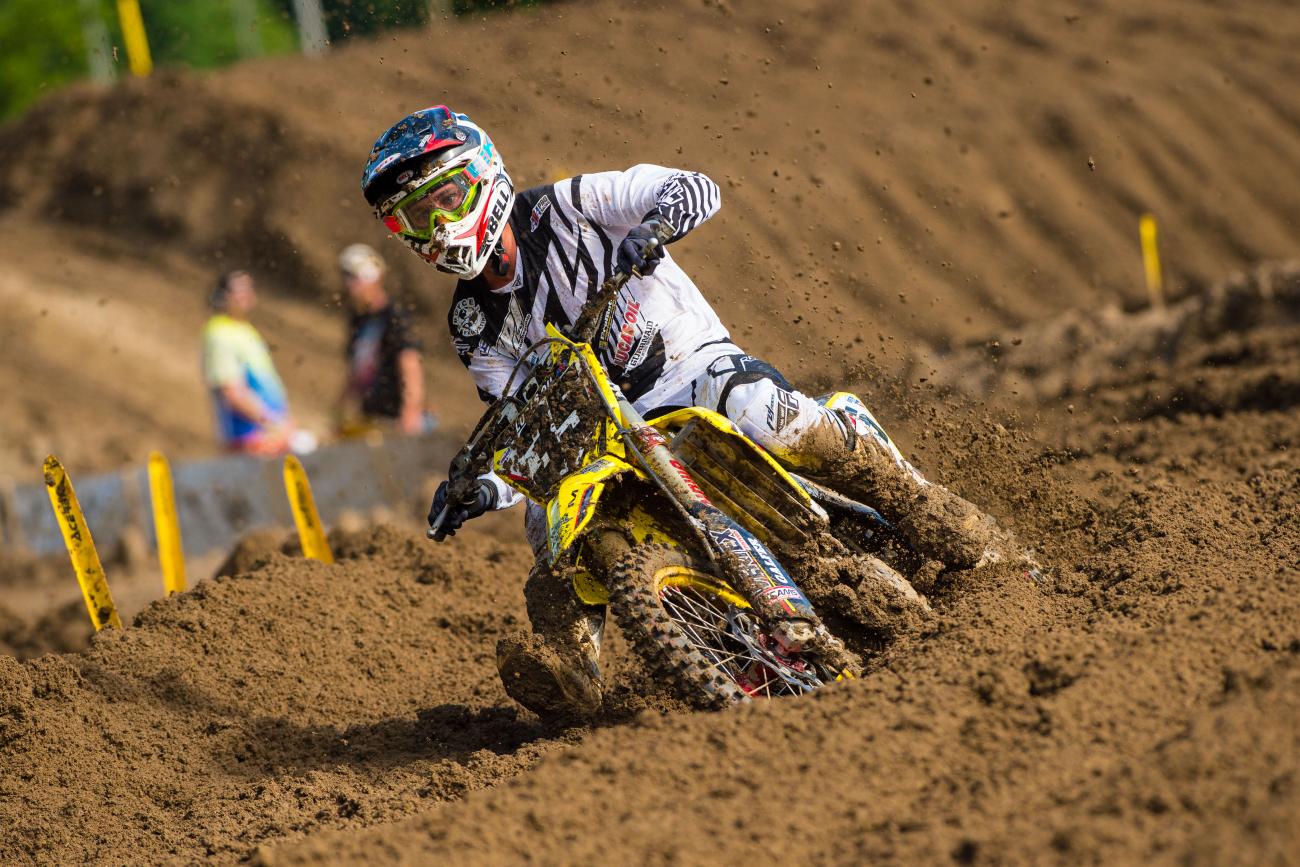 Think it's too late to join in on the fun? Nope. We have new comps weekly. New prizes are available every week, and this week, Never Summer will be awarding prizes to the top three in both the 450 and 250 classes. It costs a mere $4 to be eligible for weekly prizes, so get on it!

Ninety-eight percent of all users had Dungey on the podium.

Eighty-nine percent of all users had Barcia on the podium.

Four point four percent of all users had Baggett on the podium.

Eighty percent of all users had Webb on the podium.

Ninety-nine percent of all users had Martin on the podium.

Three point two percent of all users had Savatgy on the podium.

Seven (!!!) riders will make their 2015 Lucas Oil Pro Motocross debut this weekend at round nine at Washougal, Washington. While we can’t confirm, we’re comfortable in saying this is the most season debut for one round that is not an opener or following Loretta Lynn’s in the history of the sport. With such special circumstances, we’ve decided to change up from the normal routine and predict the best we can where each rider will finish.

Trey Canard | Prediction: Top Five
Yes, Washougal and Canard have a long history—and not really a good one—but Canard is not rushing back, and like Cooper Webb a few weeks ago, he's only returning because he is ready. I don’t think Canard will take the risk to push hard enough to podium, but top five isn’t out of the question.

Mike Alessi | Prediction: Top Fifteen
MotoConcepts' global trek lands in Washington—the team's home race—welcoming back Alessi to Lucas Oil Pro Motocross. Alessi’s return to outdoor racing in America (he raced in Canada in 2014), comes at the track where he finished second overall in 2012. I honestly have no idea where Alessi stands, given his poor results in Europe, but I would think they would improve on a track Alessi is familiar with.

Vince Friese | Prediction: Top Fifteen
Friese didn’t make the trip to Europe, but he did race MX1 in Canada, winning round three of the series. Friese also spent 2014 in Canada, but has been good at Washougal in the past—finishing twelfth overall in the 450 Class in 2012.

Aranud Tonus | Prediction: Top Fifteen
Tonus’ highly anticipated return was delayed a week due to a shoulder injury. Waiting a round or two is the smart choice when it comes to Tonus for two reasons: 1.) He’s never raced in America and Washougal can be tricky, and 2.) He’s been out since March with a serious illness. Give him some time before sliding him into your top ten.

Martin Davalos | Prediction: Top Twenty
Davalos hasn’t raced outdoors since 2013 after missing all of last season with a badly broken leg/ankle. He’s also coming back from Epstein-Barr virus, which, as we know, is brutal. While I think he improves with time, wait and see how he does in his first race before using a top fifteen pick on him.

Michael Leib | Prediction: Top Twenty
Leib doesn’t have much outdoor experience… in America. He’s only raced two rounds of Lucas Oil Pro Motocross—both back in 2013—has never raced Washougal, and is returning from a big crash in Oakland. With all that said, I still think he sneaks into the top twenty.

Austin Politelli | Prediction: Top Twenty
The ultimate wildcard of the group. Like Leib, Politelli has spent much of his time racing outside the U.S.—in his case, Canada. The speed is there—he did win an MX2 championship in Canada for what it’s worth—but I think that long a layoff adversely affects him. He probably finds a landing spot inside latter half of the top twenty.

As we’ve mentioned time and time again, Racer X MotoDynasty Fantasy Motocross isn’t won by picking Ryan Dungey to win. EVERYONE picks him inside the top three. Seriously, 98 percent (what the hell were the other 2 percent thinking?) had him making the podium last week. Where you really make points is 15–20. While the task is sometimes daunting, we’re here to give you a few helpful tips.

It happens every week. A top rider has a mechanical or crashes in a moto, but combined with a good first or second moto, grabs a top fifteen finish. Just last week in 250MX, both Chris Alldredge and Justin Hill finished sixteenth and seventeenth. While you can’t always predict when it will happen, sometimes going out on a limb and picking a top rider to have an off-week isn’t a terrible idea.

The 250 Class is Much Harder

The 250 Class is chalk full of factory or factory supported riders—eighteen of the top twenty last week are such. This makes it very difficult to pick spot 15–20. So, here are some tips:

- The 250 Class also features a lot of inexperienced, crash-prone riders as well. If a guy tends to crash a lot, well, then he probably has an “off” moto that combined with his good moto pushes him back to 15–20.

- Privateers are at a major disadvantage in the 250 Class. If you’re picking a privateer, you’re best bet is 15–20.

Here are some guys to watch out for in both classes that could fill the 15–20 spots.

Kyle Cunningham
In his return to 450MX, Cunningham has been a solid 12–18 place guy. He may flash toward the top ten, but he’s a solid top-twenty pick week in and week out.

Jason Brooks
The privateer has really come on as of late. Picking him top twenty is a good bet.

John Short
The other Short (not related) is a solid pick if you’re looking for a sleeper.

Daniel Baker
The rookie has had an up-and-down year, but he’s managed to stay inside the top twenty at just about every round. I like him there again this weekend.

Justin Starling
He’s struggled since a breakout ride at Budds Creek. Look for him to bounce back this week.

Luke Renzland
Another rookie that has been good—but not great. I like 15–17 this weekend.

Justin Hill
Hill bounces back at his home track and scores his first top-ten overall since his return.

Chris Alldredge
The Oregon native returns to the top five this weekend.

Race X League Standings (After Round 8)