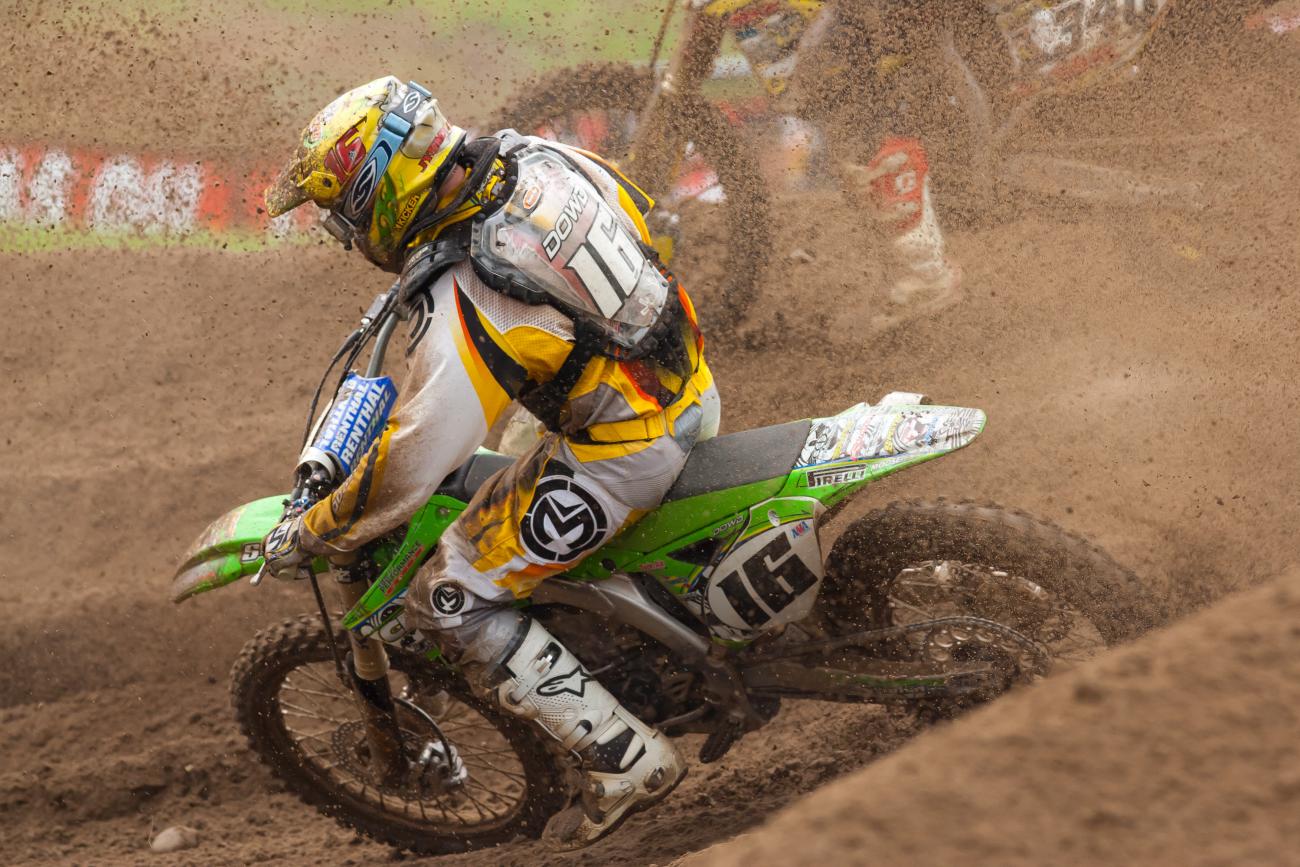 Where Are John Dowd

John Dowd is just a few weeks shy of turning 50. And he is racing a few select eastern Canadian Nationals.

John Dowd is one bad dude.

Despite announcing his “retirement” at the last Southwick national in 2013, Dowd is still going strong, albeit on his own terms. His main goal for riding now is to help his son Ryan get faster—and help him follow in his footsteps as a professional racer. We caught up with Dowd just after he crossed back over the American border following the Sand Del Lee event.

Racer X: John, what’s going on? You are still out there racing your bike?
John Dowd: Well, right now I’m laying in the back of our fun mover and half asleep while my son and his friend are driving home. So I guess I can reap some benefits of having kids now [laughs]. But, yeah, racing right now is more about my kid; I don’t go racing for myself. I have found that when I bring him and I don’t race, it is a long, boring day. So I am still riding, but mentally it’s just for fun. I really don’t like the stress of expectations and results, but I do like being on the bike. So basically, I’m just winging it here and there.

What kind of racing have you guys been doing?
We have been doing almost all local stuff. The NESC is still the dominant series up here, and it’s where all the fast guys go. The NESC is still pretty fast—we have a couple of good guys, like Jason Brooks. Didn’t he just get a thirteenth this weekend at Millville? [Ed note: He did.] That’s pretty fast in my book. Well, last year, he won all the NESC stuff. We also have Jimmy DeCotis. He is going for the MX2 Canadian championship; he is pretty damn fast. We try to concentrate on the NESC, and really more so for Ryan. From my viewpoint and lifestyle, it’s the best place for us to go to get that speed and go to the next level.

So what’s with racing the Canadian Nationals then? How does that fit into things?
Well, they have some pretty cool tracks here on the East Coast. These last few, they have been sand tracks. So I thought it would be a good idea to bring my son up and get his feet wet with national-level competition. I think the Canadian Nationals are a perfect stepping stone, and a step up from our local scene. So we will see how it goes and just do a few of these, and go from there.

With all the training facilities and amateur nationals that some of these kids are doing now, you guys are certainly taking a more traditional, and what is now a non-conventional, route to becoming a pro.
Well, I certainly didn’t follow that plan, and it worked out for me. But I don’t think you have to go the whole Loretta route. If you are fast enough, you can go out and give a whirl. If you go to Loretta’s and do good, that’s really cool, but then you have to go to a national, and if you don’t do good, you are screwed. I honestly feel that our local scene is strong. I think once you start doing the Nationals, you can focus on just getting better and better over time. If you have it, you have it.

So what are Ryan’s aspirations?
He wants to try and race some American nationals—he definitely wants to give it a try. He just turned 18, and he’s been doing pretty good. I think this couple of Canadian rounds is a good stepping-stone for him, and also a real eye-opener for him. He thinks he’s in good shape, but the motos are longer up there than at home and the guys are faster. So I think he saw that he was dragging mud with his current level of conditioning. I think he now realizes just how hard he has to push for an entire moto, and that he needs to step things up.

How did it go for you guys today?
Well, Ryan didn’t do well today—he went down hard. It was late in the day, it was hot, we had something like 100 percent humidity, so he went down hard, and the medics brought him back and thought he had heat exhaustion, but he was okay. For me, I ended up racing and did okay. I got ninth the first moto and got thirteenth in the second, which gave me tenth overall. So I was kind of happy, I guess. I was getting cramps left and right, though, and it was tough.

How about last week? How was that?
Last weekend, we had some bike issues, but he got fourteenth overall. That was our first go-around, and it could have been worse. I am riding 450 across the board, and last weekend we were both in the same class and ended up dicing a bit. I was pumped to race him. We got together late in the moto and had some fun. A lot of people came up to me afterward and were pumped—it certainly makes for a fun story.

Ryan did race that last Southwick National with you a few years ago, didn’t he?
Yeah. That was just a timing thing. He wasn’t really ready to ride at that pro level, and he had not expected to be there, but it was the last Southwick. Once I decided it was my time to call it a career, we just thought it would be fun. Basically, his first try could be my last try. He didn’t qualify, but he was pretty close. But then last year he got hurt. He broke his hand and had a crap season. Now we are getting back in the swing of things, and time will tell. I think maybe next year we’ll do some of the Nationals, but he needs to be in better condition.

There’s certainly some talk about Southwick coming back next year—would we see a one off comeback for you?
No! But I’m certainly excited for it to happen. With Keith [Johnson] as the promoter and myself doing some of the track work, I think we can make a pretty epic track. We’re really hoping to make it happen, but nothing has been locked in or confirmed that I know of. We have done a lot of work on the track, and we now have the expert riders doing around two-minute lap times. Obviously, the facility is very small, and that is a legitimate issue, but honestly, the track has so much history—it is a special place. I just hope it does come back and everyone can make an agreement that works.

What are you doing with yourself these days?
I’m certainly keeping busy. I have my own excavation business, which is a full-time job. And as I mentioned before, I am doing the track design and maintenance for Southwick. We’ve been working closely with the conservation commission in town on that. That place has always had a real problem with erosion, as it is really hard to keep the sand on the track when it rains hard. So between those things, and then trying to go racing every weekend, I’m super busy.

What kind of excavation work are you doing?
I do some residential work, mostly foundations and stuff, as well as some parking lot and drainage work. I have pretty good-size excavator, a few skid steers, and some other equipment. It’s really whatever I feel I can handle. If I can't handle a certain job, then I just pass on it. But I really enjoy working for myself. And you know, I used to do this before I was racing and before all my factory deals. I was working as an excavator full time, but then my racing took off. You know, I can’t seem to get out of the dirt.

So what’s your secret to your longevity?
I’ve been getting a lot of comments from people asking me that. I’m going to be 50 in two weeks, and I don’t have a complete answer for that. I’ve been doing these nutritional things—it’s like a patch—but I feel like it’s been helping me. My wife has been selling them, and they seem to keep me energized and healthy. But you know, it is getting harder; I was still sore this weekend from last weekends race.

How much training do you still do?
Not much, really. I don’t ride at all over the winter, and that makes things harder for me. It’s a lot harder now to get back into riding shape after letting it go away for that long. I used to ride all winter, but not anymore. Now I’m just busy doing snow removal and excavation work, so usually I am pretty lazy. And now that I don’t have to work out and train, I enjoy not doing it. I feel like I get a little fatter over the winter, but it’s almost a nice mental break for me. But right now, it’s a really fun time for me. With my son, you know, he’s right there and nipping at my heels. It’s the perfect situation for both of us. I’m holding him off for now. I’m like his carrot—he keeps trying to get me. I am trying to hang in there as much possible. Once he surpasses me, though, I don’t know, I might throw in the towel. But right now, I‘m having fun doing it.

Tell me about your program. Who is involved? You guys must have a garage full of bikes.
It’s tough. You remember my name Junkyard? It’s not just a nickname. But I feel like we do pretty good keeping stuff together. My son has two bikes—a 250 and a 450. They both get used a ton. And I have two 450s—one is a 2013 and one is 2015. We pretty much just have what we need and try to keep them together as best as we can.

And, for one thing, I barely work on my own bikes. I run whatever tires are on them because I don’t want to change them. So when it comes to my stuff, I’m lazy. But Chaplin Kawasaki/Honda has helped us out for going on eight years now. They have been awesome for us. Also, Kenny G, he runs a little performance shop here in New England, and we have been friends forever. He keeps all of our motors running. But we keep them mostly all stock so that they last longer and are more reliable. Also, Ziggy at factory Factory Connection, I have been with them since the beginning of time, or so it feels. As for the others, we get help from Spectro Oils, Pirelli, Pro Circuit, Renthal, Moose, 100%, Shoei, Sunoco Race Fuels, Motion Pro, and Moto Master. A lot of those guys have been sponsoring me for years—some going back to the 1990s. But it is really nice to have all that help over these years.

What was the rumor about you racing for Tony Alessi?
It was a complete rumor. I have no idea where it came from, but there was nothing to it on our side.

But, hey, thanks for calling. One funny story: One of the Canadian journalists, they starting calling us Old Dowd and New Dowd. It seemed like everyone was then referring to us in that way up there. Not sure if it’s going to stick, but I thought it was pretty funny.