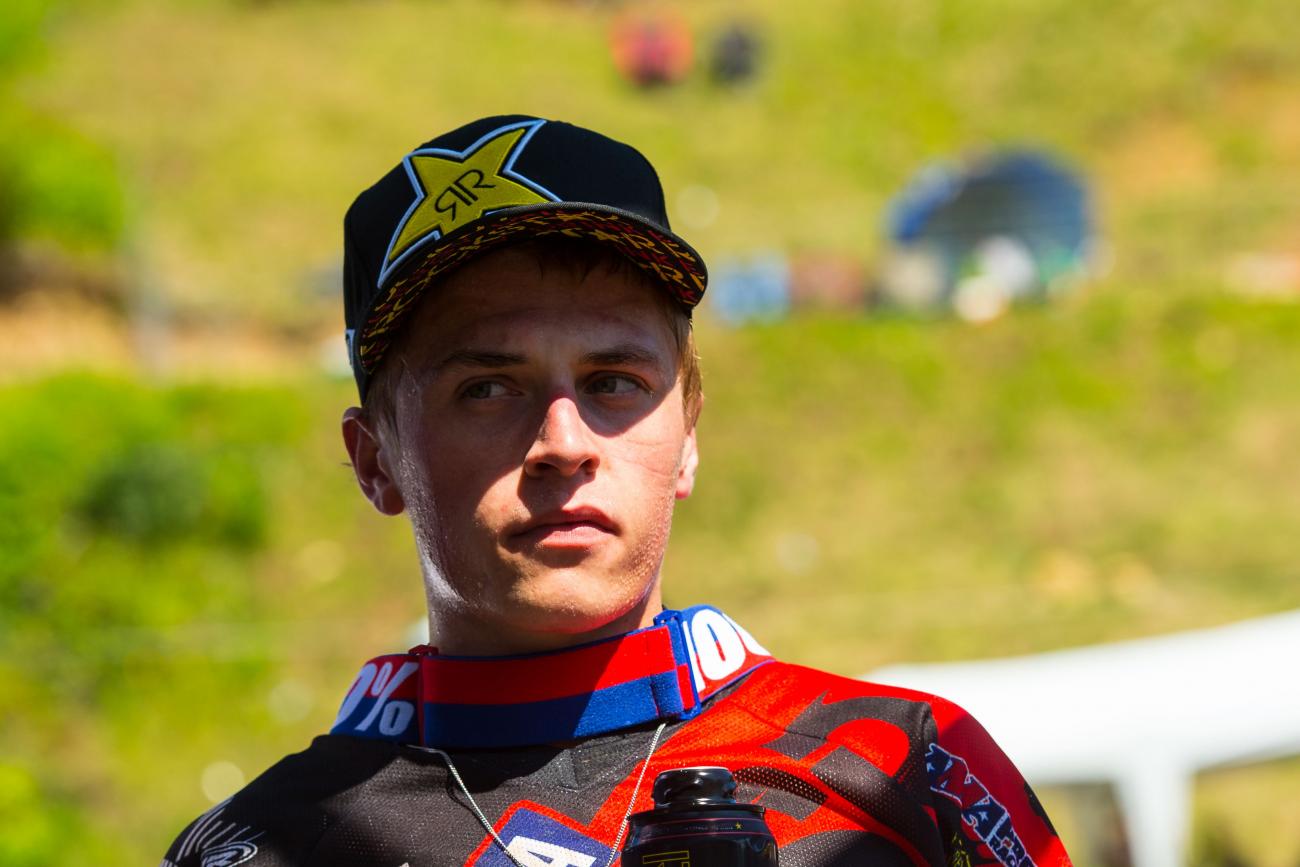 Yamalube/Star Racing Yamaha’s Jeremy Martin didn’t win the overall at his home race at Millville, going 3-1 for second in 250MX. It was still successful, though, as JMart salvaged a third in the first moto despite riding without a clutch lever (it came loose from its perch and just dangled out of reach) and dominated the second moto, all helping him open a 19-point lead over Marvin Musquin in the 250MX standings. He talked about it after the race.

Racer X: Give us your version of how the day went.
Jeremy Martin: The day started out really good. Honestly, I was more nervous going in today for my mom and dad than I think I was about racing today. They had tornado warnings last night, and with the creek being right there and how hard it rained and the wind, I was worried about all the campers out here. I felt bad for my mom and dad. They work really hard year-round. All the staff and everyone that have been here for the last two weeks busting their butts. The facility looked really nice, and then with the rain and all that stuff, it kind of downplayed it a little bit. But the track turned out really good at the end of the day.

And being home for two weeks, did it add anything? Was it less stress for you during the week in terms of just being around family or does it add a different element that you’re not used to living somewhere else?
It was nice to be home, and I love it. They say home is where the heart is, and it was nice to be back and see my mom and dad, but there are a lot of people here. They’re always asking you questions and this and that. I just wanted a change, and I wanted to come home for a little bit. I think it was the best thing I’ve done in a while.

Talk a little bit about that first moto, especially that last lap when you come up just short trying to catch Joey Savatgy.
The first moto was good. I got off to a pretty good start. Missed a shift about halfway down, and those guys kind of caught me. Otherwise I think I would have been further up there on the start. The end of the second lap I went to grab the clutch before the Holy Schmit, and I noticed that it wasn’t there. Then the bolt came out, and I had nothing for the rest of the moto. It took me probably four or five laps to figure out how to ride without a clutch. I was in first gear in almost every corner, and then I’d have to slow down and let Joey [Savatgy] go so I could see the line and carry speed through so I wouldn’t stall the bike. He’s a more aggressive rider. I kind of know what he’s going to do. I can kind of predict it. So the last lap I put in a push because I was like, If you can get second, you can get the overall. I tried, but he was hanging tough.

Were you having to do anything special, and was that hurting your lap time a little bit, downshifting without the clutch, or were you just banging it down?
I was just kind of banging it down. I was definitely abusing that Star Racing Yamaha motor. But the clutch is there for a reason, and it helps so much going into corners. You can feed it coming out of the corners. You can use it a lot. Obviously, I feel like I wasn’t able to ride to my fullest potential out there in moto one. But I gave it everything I had, and no excuses. We all have issues at least in a moto or two throughout the year, and you just got to make the best of it.

Did you find yourself in the middle of the race grabbing for it because you just get so focused and you forget it was not there?
Yeah. Lap four and five I was grabbing it, and I’m like, Dude, you’ve got to quit! There’s nothing there, just air.

Did you know Marvin Musquin had the lead in the first moto and then went down?
Yeah, I saw that he went down. He stuffed it right before the finish line in the corner. It was pretty soft. I was like, This is going to be a tough moto, because Marvin’s so fast. He’s in great shape and he’s got a good head on his shoulders. He went down and I got a bit of a gift—that’s for sure.

Does that come into play at all? You have no clutch; you know Marvin’s down. Were you trying to force the issue, or was it just taking what you can get in that first moto?
I was trying to move forward and trying to keep moving up, but it was kind of like just riding smart and had to settle in a little bit.