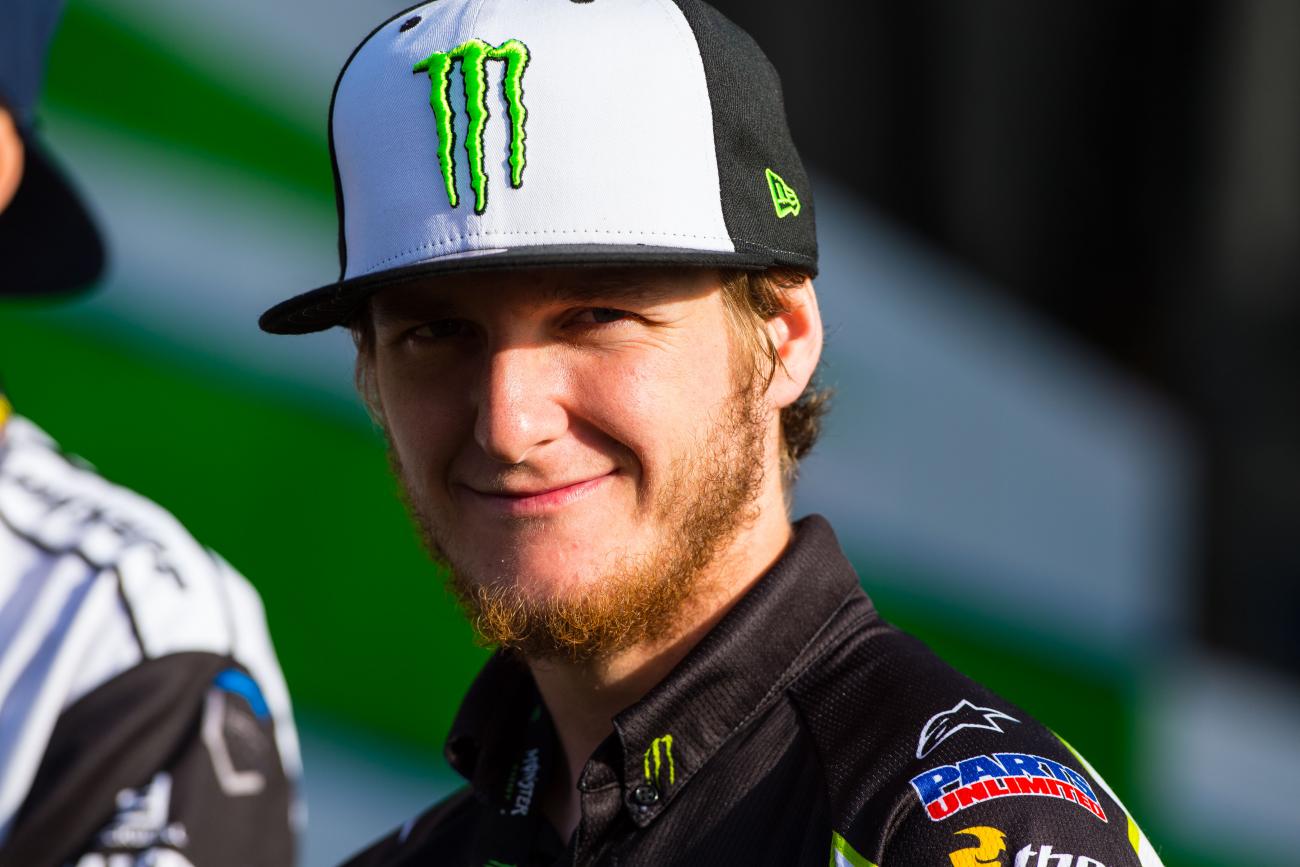 Racer X: Fill us in about your day in general. How’d it go?
Joey Savatgy: It was a good day. We’re up here again. I don’t think you can really complain a whole lot when you’re up here. Obviously, that first moto was good. I felt good. Felt like a few mistakes cost me that win, but we were right there at the end. For me that’s awesome. Been working hard down at the farm with Ricky and Jeannie Carmichael and just putting in laps. Unfortunately had not a great weekend at RedBud—just struggled all around. Bad weekend mentally, physically, emotionally—just everything. So to have that weekend off, I had two solid weeks of riding and putting in a lot of work down there. So to be back up here is good for me. It lets the team know that I’m not giving up. For me, it lets me know that the team’s not giving up on me. Like I said, RedBud was a horrible weekend, and to have them still behind me to be there and to keep pushing forward means a lot. Mitch [Payton, team owner] has believed in me since he hired me, and to me that means a lot. I respect Mitch. He’s Mitch. It’s a good weekend. I can’t really complain, like I said, I’m up here. So just got to keep working and maybe turn that two into a one, and maybe that four into a three, and just keep progressing forward.

Talk about the track conditions after the hard rain last night and if they changed between the first and second motos.
First practice was pretty muddy, but I think overall the way the track turned out, I think they did a great job of prepping it. First moto, I think, was still a little soft in areas, but second moto was actually really good. There really wasn’t any muddy spots anymore, and the track continued to break down. The braking bumps were getting bigger coming down the hills. The ruts were getting deeper. It was a good motocross track. Practice was one thing. It’s practice. To go fast in practice is cool, but to go fast in the race means a lot more. Track was great. I like this place. The environment’s good. The fans are crazy. I think they did a good job today with what they were dealt. With all that rain and everything, the track could have been a lot worse.

Talk about that first moto, the last lap when Jeremy had pulled up behind you. One, did you know he was there? And two, did you have a strategy going into that lap if you knew he was coming towards the end?
I knew he was behind me. Like I said on the podium, Jeremy’s one of those guys where you know he’s going to be strong at the end of the moto. If there’s one guy out there you can count on to be behind you or to be continuing to push forward, it’s Jeremy. So, when I knew he was behind me, I knew it wasn’t going to be an easy battle. But I felt good that moto. Things were working pretty well. Made a few mistakes middle of the moto. Kind of let Cooper [Webb] get away, and just a little too late. We had Jeremy behind on that last lap pushing a lot. I actually ran my fastest lap the last lap of the moto. So we caught Cooper quite a bit, but like I said a day late, a dollar short. But I knew he was there. I just knew I had to continue to ride my lines. If I focused too much on him, make a mistake, and right around me he goes.

I noticed earlier you were wearing a shoulder brace or shoulder strap. Is that preventative, or are kind of struggling with some injury?
No, it’s more of a comfort deal just knowing that it’s there. Just trying to prevent unnecessary injuries, I guess you’d say. But the shoulder’s good. I’ve ridden without it. Just for me it’s more of a comfort thing knowing that something’s there. In the back of my mind it just makes me settle down a little bit.

What’s next for the next couple of days for you heading up into Washougal?
Go to California actually. I leave tomorrow morning. We fly to California to do some testing with the team. Try to get this Pro Circuit bike better than it already is. Looking forward to a good week. Haven’t tested in a little bit, but the bike’s good. The team’s working hard, like I said earlier. Just got to keep working. – Chase Stallo

Racer X: Looked good for a couple laps there in the first moto at least.
Marvin Musquin: I know. I was like, Man, that’s awesome. I’m leading the race! The track was good. They did a lot of work between the motos. And then I got into the lead, and I was actually doing pretty good until I went outside and I tucked the front end so bad and stopped and went over the bars. I was like, Are you serious? I was bummed. I was like, Man, no way. I’ve been struggling with my wrist since right before RedBud. I took a full week off the bike. It was tough not being on the bike and not training because I know if you take a week off, you’re resting, but at the same time you’re not training. So I was looking for a good day and I’m like, Man, I was doing good. And then it took me a lot of energy to get the bike off that hole. And then I was tired after that. Actually, I was doing pretty good after that, and then unfortunately I went down again.

Same spot?
No, right before the rollers. That was a really tough moto, with a lot of energy that I spent on the track. So I ended up seventh, I think, so not good. Second moto, I knew it was going to be tough, after a tough moto like that with the heat and stuff. And I actually did a pretty good moto. I didn’t get a great start, but then I came back to fourth and then back to third. Actually, Cooper was not too far [ahead]. Jeremy was the fastest today, obviously. So he won that second moto. That was all he got and all I got too. I wanted to ride smooth and use my technique on that second moto because physically it was really demanding, and ended up third. I was quite happy about that second moto.

How did the wrist actually feel in the end?
It’s not too bad. I feel like I don’t have really good strength. It’s a lot better now. At RedBud, for example, it was hard to put the bike wherever I want, but it’s a lot better. It’s not too bad. So right now I don’t want to take any week off. It’s going to hurt a little bit because one of the ligaments is damaged a little bit. But we will do everything we can, and there is only a couple more races left. We’re going to give everything we have and try to be consistent.

Washougal was good for you last year. Was that actually a track thing or just a day that it came together? Do you think of Washougal as a good place for you?
That might be a place thing, a track that suits me good. So I want to go out there and win. – Jason Weigandt