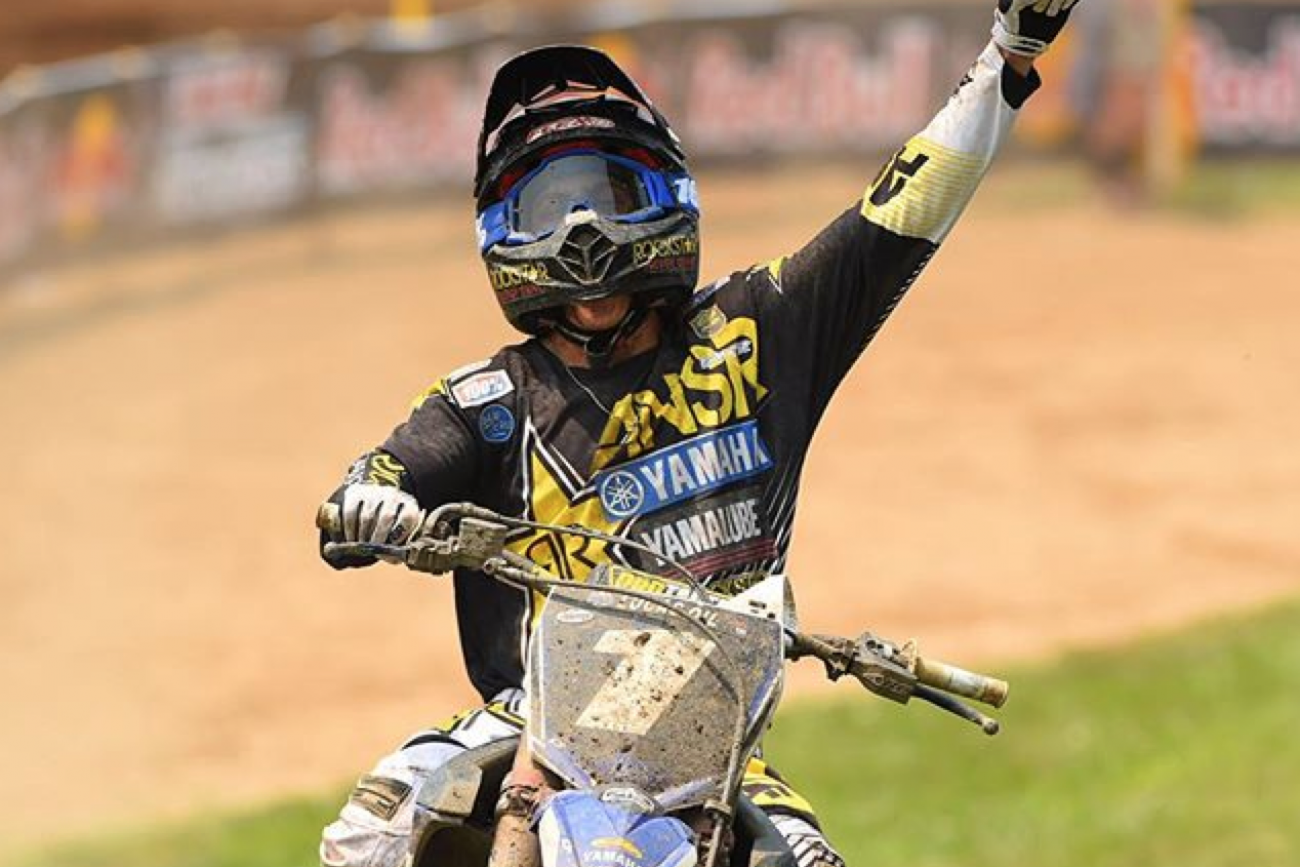 Remember what we said about Justin Barcia and momentum and confidence? It was truly on display in the second 450 moto at RedBud. Barcia held off a consistent charge from Ryan Dungey to win the moto and capture the overall—his second straight.

Barcia took the lead early, rocketing out to another MotoSport.com Holeshot. Dungey, Phil Nicoletti, Christophe Pourcel and Ken Roczen were all in tow. For some time, it appeared the battle for the win would be between a four-pack of Barcia, Dungey, Roczen and Pourcel. Yet, as the moto stretched along, it was clear the overall would be decided between Barcia and Dungey.

A cat and mouse game broke out between the two as Barcia would stretch his lead to just over 2 seconds, only to have Dungey pull it back to under one. The game played out the entire moto until the final lap when Dungey made a final push, drawing to the rear of Barcia. Dungey cut the lead to less than 2 seconds on the final lap, but Barcia was rock solid over the final lap and pull off the win by 1.6 seconds. Dungey would take second in front of Roczen, Pourcel and Jason Anderson.

Barcia won the overall with Dungey and Roczen rounding out the podium.

A trend developed at RedBud for Jeremy Martin: Start slow, close late. The second 250MX moto was nearly a mirror image for Martin as he had to charge late in the moto to capture the win. This time, he got help from his teammate.

Christian Craig snuck around to snag the MotoSport.com Holeshot over Martin, Dakota Alix and Shane McElrath. Marvin Musquin wasted little time attacking Martin, quickly making a pass stick on the moto one winner. Martin’s teammate, Cooper Webb, was hot of the heels of both and also made a pass stick early on Martin. Sound familiar?

A little over 5 minutes into the moto, Webb was able to get around Musquin as well and moved into second behind Craig. In just his second race back from injury, Webb pressured Craig for eight laps before he finally made the pass. Webb stretched his lead to around 5 seconds late in the race before an unforced error on lap 13 before the roller section, where it appeared Webb just tipped over, allowed Martin and Craig to get around. As the two moved past the downed Webb, Martin was able to make a pass stick on Craig and he took over the lead on lap 13. Martin would cruise to the win in front of a hard charging Zach Osborne, who passed Craig late in the moto. Alex Martin and Webb would round out the top five.

The most important thing for Martin today was points—he made up a lot of them. Musquin struggled down the stretch in the second moto and finished sixth. Martin picked up seventeen points on the day and now takes a seven-point advantage to his home track—Millville—in two weeks time.

Rain or shine, Justin Barcia’s season has turned the corner. Prior to Budds Creek BamBam was having a good, not great, season, and entering the weekend he had just one moto podium. Then Barcia decided to just have fun in the rain and slop, some of his favorite riding conditions. Barcia went 3-1 for the overall last weekend and gained momentum.

“The momentum is huge coming out of this for sure. I don’t care if it’s muddy or not. I still rode probably the best I’ve ridden on my Yamaha ever,” Barcia said after Budds Creek.

And it didn’t seem to matter today. Barcia took the MotoSport.com Holeshot over Ryan Dungey and teammate Phil Nicoletti. It was a JGR affair early with Barcia holding down the top spot and Nicoletti and Weston Peick third fourth, respectively. Peick would go on to finish fifth, while Nicoletti lost his front end later in the race and finished twelfth.

Barcia was solid in the front, holding Dungey at bay, and even putting distance between himself and the points leader at different points in the race. In all, Barcia led a solid six laps before Dungey pushed around. Barcia didn’t fall back quickly, though, sticking to the back of Dungey. While Dungey stretched his lead to five seconds at one point, Barcia clipped the final margin to just over three.

Dungey’s win give him five on the season, tied with Eli Tomac at the top of 450MX. Roczen would finish third with Broc Tickle, Peick, Blake Baggett, Fredrik Noren, Tommy Hahn, Justin Brayton and Christophe Pourcel rounding out the top ten.

This was a wild one from the rip. Joey Savatgy took the MotoSport.com Holeshot over Jeremy Martin, Justin Hill and privateer Jace Owen. Savatgy’s lead was brief, as he tucked the front end before the end of the first lap. He would finish the moto twelfth. Martin inherited the lead over teammate Cooper Webb and points leader Marvin Musquin. Then, all hell broke loose.

Webb pressured Martin early, never letting his teammate out of his sight. Webb finally made the pass around the 17 minute mark and began to open a small gap that at points reached more than three seconds. Two minutes later, Martin left the door open for Musquin and the points leader cut Martin’s line off before LaRocco’s Leap. Soon after Martin was getting more pressure, this time from Zach Osborne.

When Osborne briefly passed Martin it appeared to ignite a fire in the defending champion. He re-passed Osborne and started to chase down Musquin. He made a pass stick at the nine-minute mark. Musquin tipped over later in the race, relinquishing third to Osborne. He would finish the moto fourth, holding a hard charging Alex Martin off at the finish.

Up front, Martin continued to chip away at Webb’s lead, thanks in large part to his ability to continue to jump LaRocco’s Leap lap after lap. Martin pulled even with Webb with three to go. With two to go, Martin tried to dip to the inside of Webb and jump the Leap, but the corner broke away and he could only double. Webb did make the jump and extended his lead to 2.1 seconds with one lap remaining. Martin was not finished, though, and caught Webb before the rollers on the back side and dove to the inside to take the lead. He held on from there to take the dramatic moto win. Webb finished second with Osborne, Musquin and Alex Martin trialing.

Martin picked up a crucial seven points in the championship and trails Musquin by just three heading into the second moto.

If practice times are any indication, we could have a slugfest on our hands this afternoon. The top three in 450MX were separated by less than a second with Ryan Dungey edging out Ken Roczen and Christophe Pourcel. The faster times came in the second session for the 450s, with Dungey (2:00.611) fending off a typical late hot lap from Pourcel (2:00.623). Roczen was also in the mix for the top spot with a 2:00.742.

Justin Barcia, who claimed his first career overall a week ago, crashed in practice and was seen limping before remounting. Barcia qualified sixth and is expected to race this afternoon. Michigan’s own Broc Tickle topped the first qualifying session (2:01.553) and his time was good enough for fourth overall. Jason Anderson would round out the top five (2:01.722).

Red Bull KTM’s Justin Hill returns from a concussion sustained in practice at Round 3 at Thunder Valley. Prior to his injury, Hill’s season was off to a good start as he secured a podium at Glen Helen with 2-5 moto scores and was fifth in 250MX points. In practice Hill qualified with ease—twelfth fastest—just behind rookie Aaron Plessinger, but his 2:06.194 was nearly four seconds behind leader Jeremy Martin.

Also of note, privateer Jace Owen is back after missing Budds Creek and qualified seventeenth. He’s worth a top fifteen look in Racer X MotoDynasty Fantasy.

Welcome to Buchanan, Michigan, and Round 7 of Lucas Oil Pro Motocross at the famous RedBud. For the sixth time in the events history, the race is being held on Fourth of July weekend. Continuing with the theme of the series, excluding Budds Creek last weekend, the weather is pristine on race day. Race time temperatures are expected to be a breezy 75 degrees, a sharp contrast from the typically hot and humid RedBud National.

The big news, which dropped late yesterday, surrounds the shoulders of Monster Energy/Pro Circuit Kawasaki’s Adam Cianciarulo. A right shoulder injury, sustained in a crash on Thursday, will keep Cianciarulo out of RedBud. Talk around the track is that it might require surgery and knock him out for the remainder of the series. We spoke with Mitch Payton this morning and he said the team will not know anything for certain until more tests Monday.

HRC Honda’s Cole Seely is also out for the weekend after straining his left leg prior to Budds Creek. Seely tried to ride practice last weekend, but jammed the leg again and was only able to complete one lap and did not qualify. “I’m really disappointed that I wasn’t able to race today,” said Seely in a team statement last week. “After a relaxing weekend off, I felt rested and ready to take on the second half of the season, but I crashed on Thursday and strained my left leg. It was pretty sore when we went out for practice, then on the second lap I put it out in a turn and jammed it again. Since I only got a lap and a half in, I wasn’t able to qualify.”

The title fight in 250MX is down to two—defending champion Jeremy Martin and Marvin Musquin. Despite a 7-1 day at Budds Creek, Musquin picked up two valuable points on Martin last week and leads by ten entering the weekend. Meanwhile, in 450MX Ryan Dungey maintained a thirty-seven point lead last weekend, despite an uncharacteristic crash and subsequent finish outside the top ten. Ken Roczen is the defending champion at RedBud and will need a repeat performance if hopes to climb back in the championship chase.