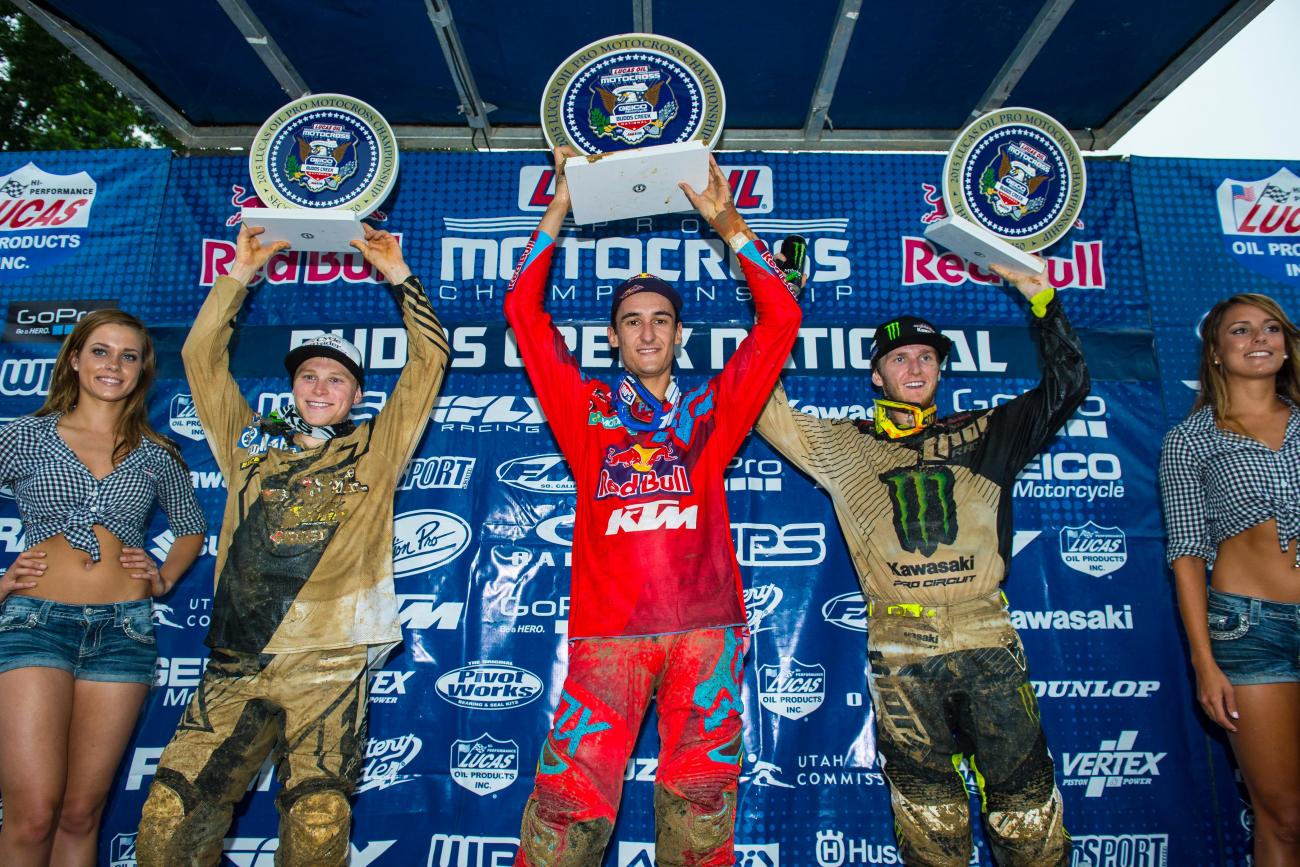 Weather finally played a factor in the 2015 Lucas Oil Pro Motocross Championship. A steady rain started during the morning and was expected to stay throughout the day. But for the most part, it held off. Practice and the first motos were run under clear, but darkened skies. The rain started to pick up in the second 250 moto and then was unleashed during and after. The start of the 450 moto was delayed two hours due to tornado warnings in the area and was nearly cancelled before the rain stopped. The second 450 moto didn’t get underway until 6:00 pm local, two hours behind schedule.

With the crazy weather, there’s always a chance of an upset winner, and we got it in the 450 class via Justin Barcia, who went 3-1 to take his first career 450MX overall win, and his first victory as a member of the Autotrader.com/Toyota JGR Yamaha team. Not like Barcia’s mud prowess was a surprise, the New York-bred rider is always fast in the sloppy stuff, and he was so pumped on the conditions that he wheelied down the start straight as soon as practice began. After the long rain delay ended, he was spotted cruising the facility and talking to fans, and the JGR team even invited some into the truck during the rain to hang out! “It was emotional day for me today, it kind of reminded me of days back in New York,” he said. “I rode press day on Thursday and I normally just take off, but I stayed here and hung out with people, old friends in the privateer pits, just had a good time.”

Obviously, Barcia benefited from the mud, but he still feels he can take huge momentum from it. “This is the best I’ve ridden on the Yamaha, best I’ve ridden in a long, long time,” he said. “Even in the first moto when it was dry I felt better.”

In the first moto, which was a little sloppy, Red Bull KTM’s Ryan Dungey checked out with the holeshot and led every lap. In the second, much wetter moto, Dungey and Barcia dueled for the holeshot with Barcia just edging Dungey out. Then disaster struck for Dungey when he hit a soft spot in the mud and came up short on a jump, bailing off of his KTM. Had the ground not been so soft and muddy, it could have been painful. Still, the series’ leader had to get up in last place, then later lost his front fender, and his goggles, and then got stuck on the last lap for good measure. Somehow he salvaged 12th, and somehow didn’t lose any points out of his lead. Soaring Eagle/Jimmy John’s RCH Suzuki’s Ken Roczen, second in points, had only a so-so day, fighting a virus that impacted his breathing. Roczen salvaged 5-4 scores.

So with Dungey and Roczen having assorted troubles, the door to the podium was open. Barcia led the second moto early, but the surging Christophe Pourcel, who outdueled Barcia for second in the first moto, came up behind him early in the second moto thinking he had a shot at the overall. “Justin made a little mistake and I went for it and I crashed,” said Pourcel with a smile, happy overall with his performance. Blake Baggett was right behind Pourcel and passed him for second, and those two battled the whole way, passing each other back and forth, with Baggett coming out with second in the moto, but Pourcel taking second overall, 2-3 to 2-4.

Baggett, of Yoshimura Suzuki, isn’t a mud specialist but says he loves Budds Creek, proven by some 250 class overall wins here. “Rain or dry I love this place,” he said. “It’s fun battling with Christophe, I try to use totally different lines, I’ll be 30 feet outside the main line and then there he is, using the same line! I was able to get him in the off camber near the finish in a last ditch to get second.”

The twisting saga of 250MX continued to play out under ominous skies in Mechanicsville. And, somehow, despite a seventh in the first moto, Marvin Musquin extended his points lead to ten over Jeremy Martin. Another turn in what has been a strange season.

First, Alex Martin. A career that reached rock bottom in 2013 when his team, Eleven10 Mods, folded mid-season has come full circle. CycleTrader.com/Rock River Yamaha threw Martin a life preserver and the two have grown into contenders together—reaching its peak today. Martin got out front quickly in the first moto when early leader RJ Hampshire slide down Henry Hill. He built a six second lead at one point, before losing his rear brake and goggles at different points in the race. Alex’s lead slowly withered away as Zach Osborne and Jeremy Martin clicked off laps times of 2:17.522 and 2:13.522 on lap 11, respectively, while Alex was struggling to a 2:20.248. Alex was able to regroup, but couldn’t hold off the charge of his younger brother Jeremy. The defending champion appeared to have the moto win in hand before stalling on the final lap. Alex went on to the moto win, the first of his career.

Storylines continued to follow the two brothers in the second moto. After a bad start from Alex, Jeremy was inline for the overall as he drew close to Adam Cianciarulo in second. Jeremy pulled to within a second before having to ditch his goggles. He quickly started losing positions, dropping all the way back to sixth. As Marvin Musquin continued to pull a huge lead, Alex Martin had a chance at his first career overall if he could pass Jeremy. The twist: Alex also had to ditch his goggles and was having trouble seeing.

“It was really hard to pass in the second moto. I was kind of waiting for some of the guys to tip over because that usually happens in the second moto,” he said following the race. “I couldn’t see the mechanics area very well, so I had no idea I was that close to the overall.”

Jeremy would hold on to sixth with Alex in seventh.

As for Musquin, he was lucky to have a chance at the overall after tangling with Cianciarulo early in the first moto and only able to come back to seventh.

“The conditions were really hard today with all the mud,” stated Musquin. “It was definitely challenging and I am grateful to get the win.”

Joey Savatgy had a breakout ride last year at the Indiana National in heavy rain, so it was only fitting he bring up the rear on the podium. “I don’t really do anything different, I think you can get away with a lot more when it’s not muddy. When it’s muddy, and you start riding out of you’re comfort zone and on the edges, you get off into the mud and that’s when mistakes happen,” he said following the race. The second moto podium was Savatgy’s third of the season.