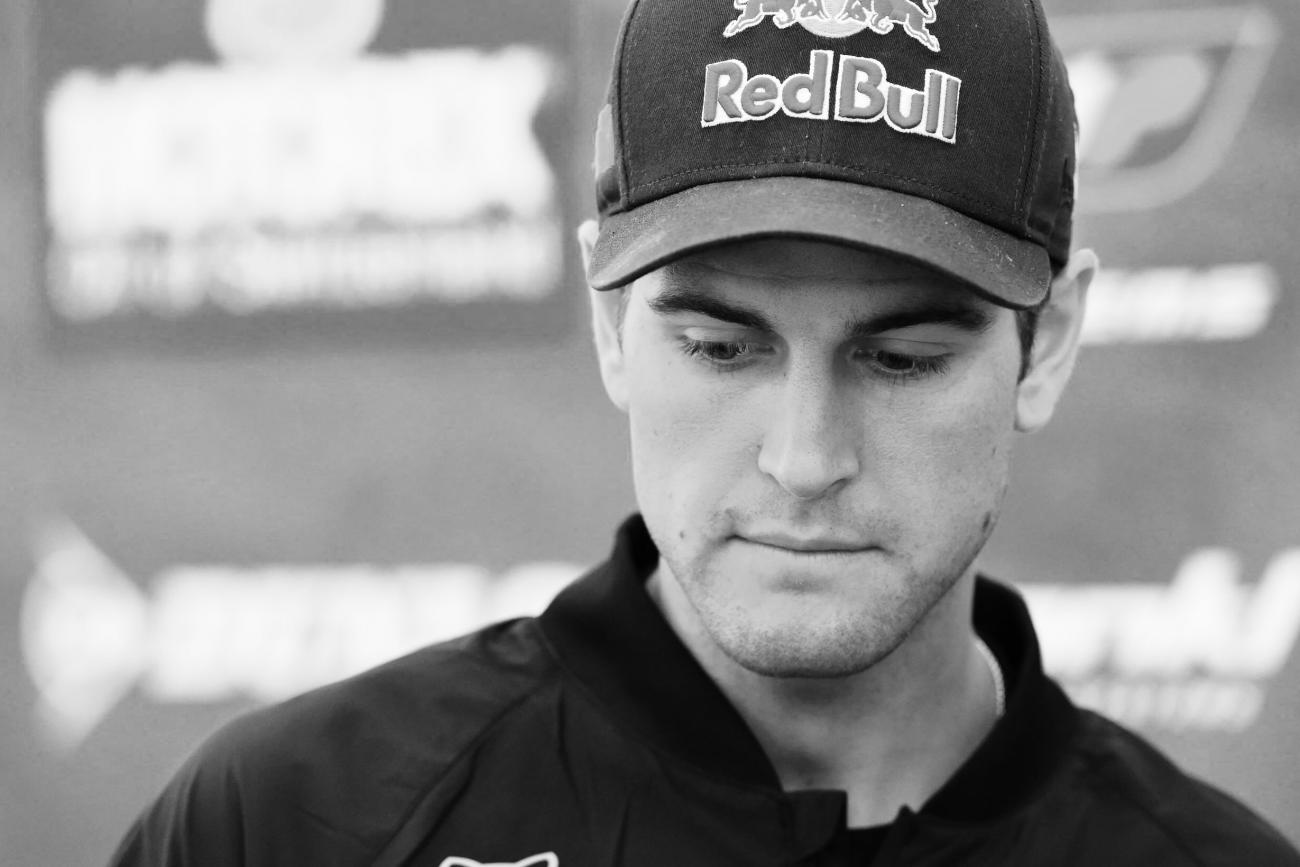 Welcome to the Budds Creek National Race Day Feed. We'll be updating the feed as the day progresses, so keep checking back for the latest news as the racing action unfolds.

Following a two-hour delay due to severe weather, the second 450 moto finally got underway at 6:00 pm local. And it marked a crucial turn in the championship.

Justin Barcia slid his way around the slick left hand start to grab holeshot following the delay. He had Ryan Dungey hugging his left side as the two went side-by-side over the first jump. Barcia cleared, as Dungey came up short, going over the bars. Dungey worked his way around the treacherous course and into the top ten before getting his bike stuck late in the race. He finished twelfth.

Barcia was in control the entire race, cruising to the moto win and his first career 450MX overall. Blake Baggett and Christophe Pourcel swapped second numerous times before Baggett made the final pass late in the race.

As a slight drizzle turned to heavy downpour, the overall from Budds Creek began to slip from the grasps of Jeremy Martin and into the hands of Marvin Musquin. Jeremy was inline for the overall after his brother, Alex, the winner of moto 1, was buried at the start of the second moto. Jeremy had moved to within a second behind early leader Adam Cianciarulo and was pressuring him into mistakes. Then, Jeremy just disappeared. Quickly he went from one second behind to four—then to sixth place. Jeremy had lost his goggles and was dropping anchor in the adverse conditions.

The battle for the overall was left between Alex Martin and Marvin Musquin. All Alex needed was to pass his younger brother for fifth to capture his first career overall. In a twist, Alex was also sans goggles for the second straight moto. Alex drew to under a second of his younger brother on the final lap, but couldn’t make the all important pass. Musquin, who cruised to a just over eleven second moto win, won the overall.

Adam Cianciarulo, who led early before washing out at the bottom of Henry Hill, finished second in the moto. His Monster Energy/Pro Circuit Kawasaki teammate Joey Savatgy would round out the podium. Jeremy Martin finished sixth with Alex one spot behind in seventh.

The severe weather surrounding the nearby area continues to be held at bay. Early showers have been replaced by overcast, with more rain not expected until at least 4pm EST (as of now). While the track is holding up, added value has been placed on the start. Get one and take off. Don’t and be punished with roost over the next thirty-plus.

Ryan Dungey got the start and….basically took off from there. Dungey opened a three second lead after lap one that extended to nearly twenty seconds, at points, and just over ten by race end. Behind Dungey, Ken Roczen’s title chances exploded late in the moto. After passing Christophe Pourcel on the first lap, Roczen looked to have second sewn up, leading for more than twenty minutes. Late in the race, Roczen had problems as Pourcel, Justin Barcia and Blake Baggett all passed the defending champion. It’s unknown if Roczen had bike problems or his back was giving him trouble, but he dropped from second to fifth in a hurry late in the race. We will provide an update as we know more.

Remember Southwick 2011? Alex Martin, then with the underdog, underfunded, Eleven10 Mods team, splashed his way through a soaked Southwick to his first career podium. Fast forward four years and Martin, in a similar situation, trudged through a muddy Budds Creek to build, at times, a more than five second lead… which evaporated when he lost his goggles late in the race. For a time, it was all Alex… or at least a Martin.

Late in the race Alex was forced to ditch his goggles and his lap time plummeted to a 2:20.248, while second place Zach Osborne ran a 2:17.522 and his brother, Jeremy, a 2:13.522. Jeremy eventually worked past Osborne and onto the tail of Alex. Brotherly love was thrown out the door, as Jeremy made a pass stick following the finish line rollers—stealing away the first career moto win from his brother.

[Update: Alex reportedly lost his rear brake around 15 minutes into the moto.]

Or at least that what EVERYONE thought was going to happen.

On the final lap Jeremy stalled his bike, leaving the door open for Alex to sneak past and cruise the final few corners to his first career moto win. Jeremy was able to get his bike started in time to hold off Osborne for second.

Joey Savatgy and Christian Craig would round out the top five. Series points leader Marvin Musquin tangled with Adam Cianciarulo early in the race and could only work back to seventh. Cianciarulo finished eighth. In his first race back since Hangtown, Cooper Webb finished sixth.

Surprise early leader Justin Starling, in his first race with Traders Racing Kawasaki after beginning the season with MotoSport.com/GPI Honda, finished just outside the top 10 in eleventh.

Mother Nature relented long enough for the first, and only, practice sessions to wrap up at Budds Creek. Although the rain subsided briefly, the early morning weather did enough damage. The slick hills challenged riders, with laps times well north of two minutes. The track dried out a tad for the 450 Groups, and it showed in the lap times.

Christophe Pourcel said it would take him around five races before he felt truly comfortable and up to speed. And he was on point. He set the fastest qualifying time at High Point, captured his first moto podium of the season and finished a season-high fourth overall. After a week off, Pourcel was doing Pourcel things in qualifying. Justin Barica came up swinging early in the session, jumping right to the top with a 2:14.226. The time held for nearly the entire session until around two minutes when Pourcel dropped just over a second on Barcia. Pourcel’s 2:13.181 would stand up over the remaining two minutes to top Barcia (2:14.226), Ryan Dungey (2:14.399), Jason Anderson (2:15.203) and Ken Roczen (2:15.435).

The biggest news from practice was Cole Seely failing to qualify. Seely's 2:31.640 in the Group A session was only good enough for thirty-second overall in Group A and forty-seventh overall. Seely is currently eleventh in points, two back of Phil Nicoletti, which means he doesn’t get a provisional. In short: Cole Seely will not be racing this afternoon.

The surprise of the day was Connecticut’s Chris Canning. The privateer, who grew up racing the famed NESC and NEMA series’ in the New England area, shook up the top ten, qualifying ninth. For more info on Chris, check out this Privateer Profile we did back in 2012.

You can watch all of the action today beginning at 1 p.m. (ET) on MAV-TV and Racer X Online, as well as www.promotocross.com. The second motos air live at 3 p.m. (ET) online as well as NBC Sports at 9 p.m. (ET).

Welcome to Mechanicsville, Maryland and a very wet Budds Creek National. The rain, which has been a steady presence this morning, with more on the way in the afternoon, has already factored into the race day schedule. Practice will now begin at 9:30 a.m. EST and will feature just one twenty-minute practice session for both classes. Due to conditions, the qualifying races have been cancelled and the top forty from qualifying will transfer directly to the main.

Coming out of the off weekend, Ryan Dungey enters Round 6 (of 12) with a thirty-seven-point lead over Ken Roczen. Dungey has built his lead with consistency, finishing outside the top two only once this season, a sixth in the first moto at Glen Helen. He also has three moto wins on the season.

An early-season back injury seems to be behind Ken Roczen, as he won his first overall of the season at High Point before the week break. “Obviously, our season didn’t start out exactly as planned but we’ve been able to get better every week,” he said in team statement. “It’s been a tough season so far but the whole team stepped up every week since the beginning of the season and we were able to get the win at High Point. If we want to be at the very front and in the mix for the championship, we’re going to have to beat Ryan (Dungey) every time. It’s not going to be easy but I feel good on the bike so it’s up to us to make it happen.”

Something to remember: the last time rain played a factor outdoors—the Indiana National a season ago—Roczen went 1-2 to help nail down his first career 450MX championship. Dungey went 2-9 on the day.

The championship chase in 250MX is much tighter, as Marvin Musquin leads Jeremy Martin by a mere eights points after five rounds. Musquin carved the hillside of High Point to the overall before the break, regaining the points lead in the process. Meanwhile, Martin struggled with starts and could only muster a 4-4 finish. A season ago at Budds Creek, under much more ideal circumstances, Martin went 2-2 for second overall behind Blake Baggett. Musquin struggled to tenth overall via 8-14 moto scores.

Rain will play a factor today, so keep an eye on former GNCC winner Aaron Plessinger, as well as  Zach Osborne, who also has off-road experience.

You can watch all of the action today beginning at 1 p.m. (ET) on MAV-TV and Racer X Online, as well as www.promotocross.com. The second motos air live at 3 p.m. (ET) online as well as NBC Sports at 9 p.m. (ET).