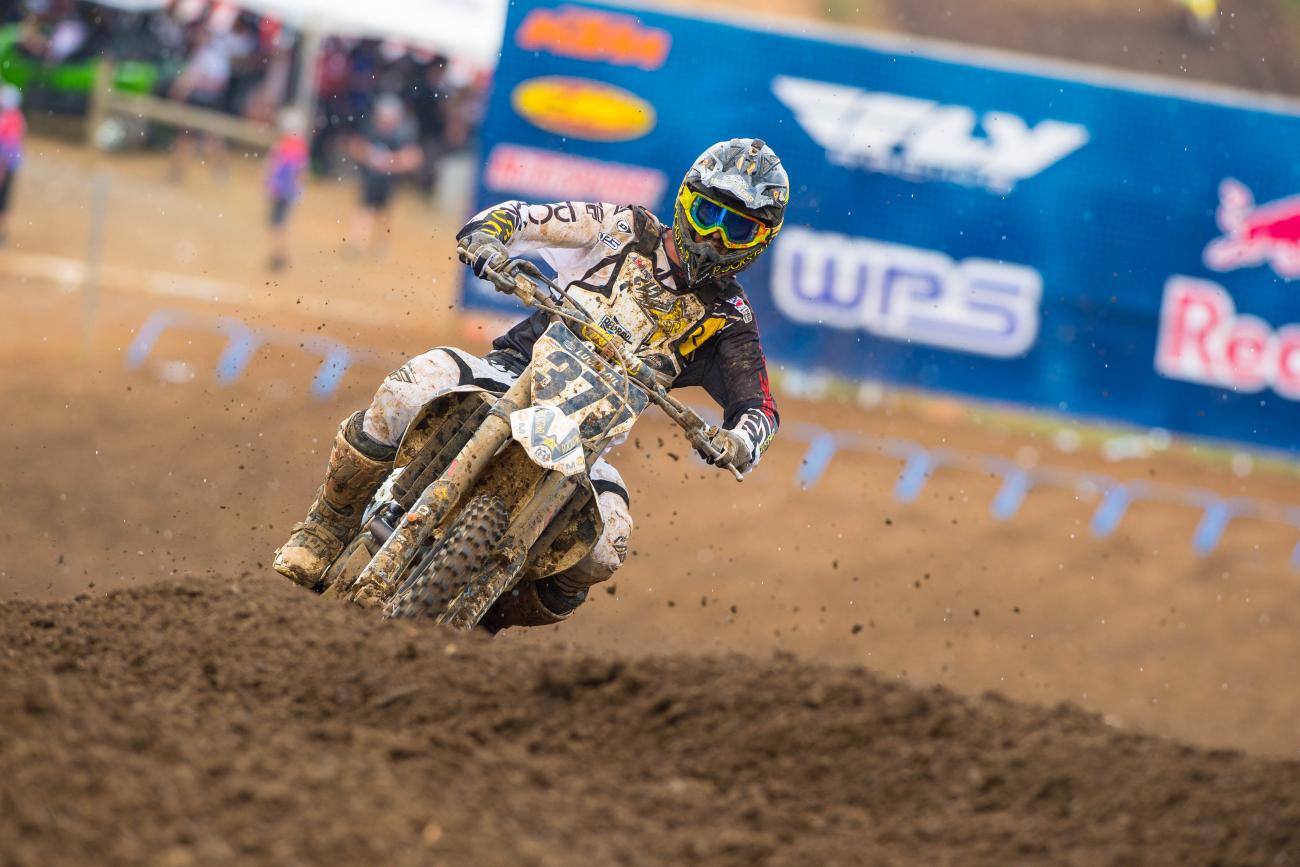 We’re right in the transition between spring and summer, and on the eastern side of the U.S.; that means thunderstorms are a constant threat. There’s a chance a quick one could hit during High Point on Saturday. Now, it’s not going to be a crazy mudder like it was so many times when High Point ran on Memorial Day weekend in May, but in general the elements are always a threat at this round. Conditions can be excruciatingly hot and humid one moment at High Point, then soaking wet, then back to scorching with a side of steam—all within a matter of twenty minutes. If the rains do come quickly during a moto, it will throw goggle prep and race strategy way off. Plus, track conditions and maintenance vary if there’s a storm brewing. This could have an impact on everything and everyone. –Aaron Hansel

Adam Cianciarulo isn’t a rookie, but so far this season all these tracks have been new to him. He missed the first leg of 2013 due to salmonella poisoning and was out for the entire 2014 season with a shoulder injury. The lack of familiarity doesn’t seem to be hindering him too much though—he led laps in Hangtown, made the podium in Colorado, and would’ve made the podium again last week if he hadn’t crashed late in the first moto. High Point is the last national for a while that’s new to AC, so if he can get a podium there it should be a nice boost for him as he heads toward the familiar ground of Budds Creek. –Hansel

We’re talking off-camber turns (right-handers that are sloped left, and vice versa), and High Point is full of them. Heck, even the venue’s most famous jump, The Incredible Huck, is preceded by a mild off-camber. It’s a departure from the first four rounds, especially the Chris Christie-sized ruts of Thunder Valley, and it could help creative-line-takers like Christophe Pourcel and Blake Baggett excel. –Hansel

Is what CycleTrader.com/Rock River Yamaha’s Alex Martin is probably hoping for this weekend, because he needs to bounce back big time after four consecutive bad motos. He’s been riding well, but weird mechanical failures, crashes, and poor starts have prevented him from getting good results. Good news is that bad luck doesn’t last forever. Look for Martin to get back to his front-running ways this Saturday. –Hansel

We’re not referencing sleazy TMZ headlines here; we’re talking about Aaron Plessinger’s holeshot and subsequent seven laps led at the Tennessee National. At the this level, leading even a single lap is something to brag about, but seven is an outright exhibition of speed and skill, especially when guys like Jeremy Martin and Jessy Nelson are banging on your door. Even more impressive, he did it with a broken toe and injured back. We’ll see if Plessinger can get up front and hold them off a little longer at High Point now that he knows what it’s like to lead a pro national. –Hansel

As Hansel mentioned above, High Point’s notorious off-camber turns have played to the success of former GP riders, particularly Frenchmen. David Vuillemin won the overall two straight years in the early 2000s (2000-‘01), and the great JMB took the overall in 1990 (he also finished second overall in 1992). More recently, both Christophe Pourcel and Marvin Musquin have carved up the hillsides with precise lines en route to overall wins. Pourcel had three moto wins in a two-year span (2009-‘10), capturing the overall in 2009. Musquin went 2-1 in 2013 to win the overall—his first at High Point. The two are at different crossroads in the season—Musquin's in a championship battle, and Pourcel is growing accustomed to a new bike and class—but each should excel this weekend. History tells us it’s a high probability. –Chase Stallo

With sixteen motos left to run in Lucas Oil Pro Motocross, Ryan Dungey holds a 37-point lead over Ken Roczen. Thirty-seven may seem like an insurmountable lead, but as we saw as recently as Thunder Valley with Eli Tomac, the landscape can shift on the drop of a dime. Of course, Ryan Dungey usually avoids such trouble, but all Kenny can do is win races and hope for the best. He seems to be getting better each week. “I had a really good week training,” said Roczen in a team statement. “I just have to keep doing that and get my body more solid. We should be good for the next few rounds. Personally, after the off weekend [next week], I’m planning on being back at the very top every single round. High Point has been one of those races where I’ve always done really well so we’re expecting the same kind of results this weekend.” Roczen needs to pick up an average of 2.31 points a moto to claim a second straight title. In the last nine races in 2014, Dungey finished worse than third only once—a ninth in the second moto at a rain-soaked Indiana National. Kenny has his hands full, so he needs to start chipping away sooner than later. -Stallo

After eight motos, the top two spots on the 250 leaderboard appeared to be locked in stone, with Jeremy Martin and Marvin Musquin 47 points clear of third. Behind the two, it’s a rat race, with numerous riders flashing in and out of the top three. And remember, Cooper Webb, a pre-season title favorite, is expected back at Budds Creek. Aside from Martin and Musquin, nine different riders have a moto podium through eight rounds, a list that doesn’t even include the injured Justin Bogle, who had seven moto podiums a season ago. Will High Point add a tenth member to the podium? –Stallo

From ultimate surprise to ultimate lows, Christian Craig has seen both since returning to pro racing just two weeks ago. Craig shocked the industry at Thunder Valley, topping qualifying and finishing fifth overall in his first career 250 race and first race back in 2015. Then came the lows. He entered Muddy Creek fighting a bad cold, and to worsen matters, he had a mechanical in the second moto, costing him around five minutes. "Honestly, I'd like it if I could just erase that weekend in general because it bums me out; that was not me out there,” he said in a team release. Craig is back home in Minnesota and on a normal schedule after spending time in California testing with the team. Can he leave the troubles of Muddy Creek behind and return to the top five? -Stallo

High Point will look a tad different this year. Track architect Randy Poulter, who recently redid Ironman Raceway, and the promoters of the event have decided to use the track’s natural elevation more instead of going diagonally. Racer X test rider and local privateer Charles Bright said after press day the track flowed better and was more fun. The idea behind the changes was to make the track more technical. The changes were made with recycled dirt from a nearby pond that had run off the track over the years. Check out the animated track map below for more. –Stallo