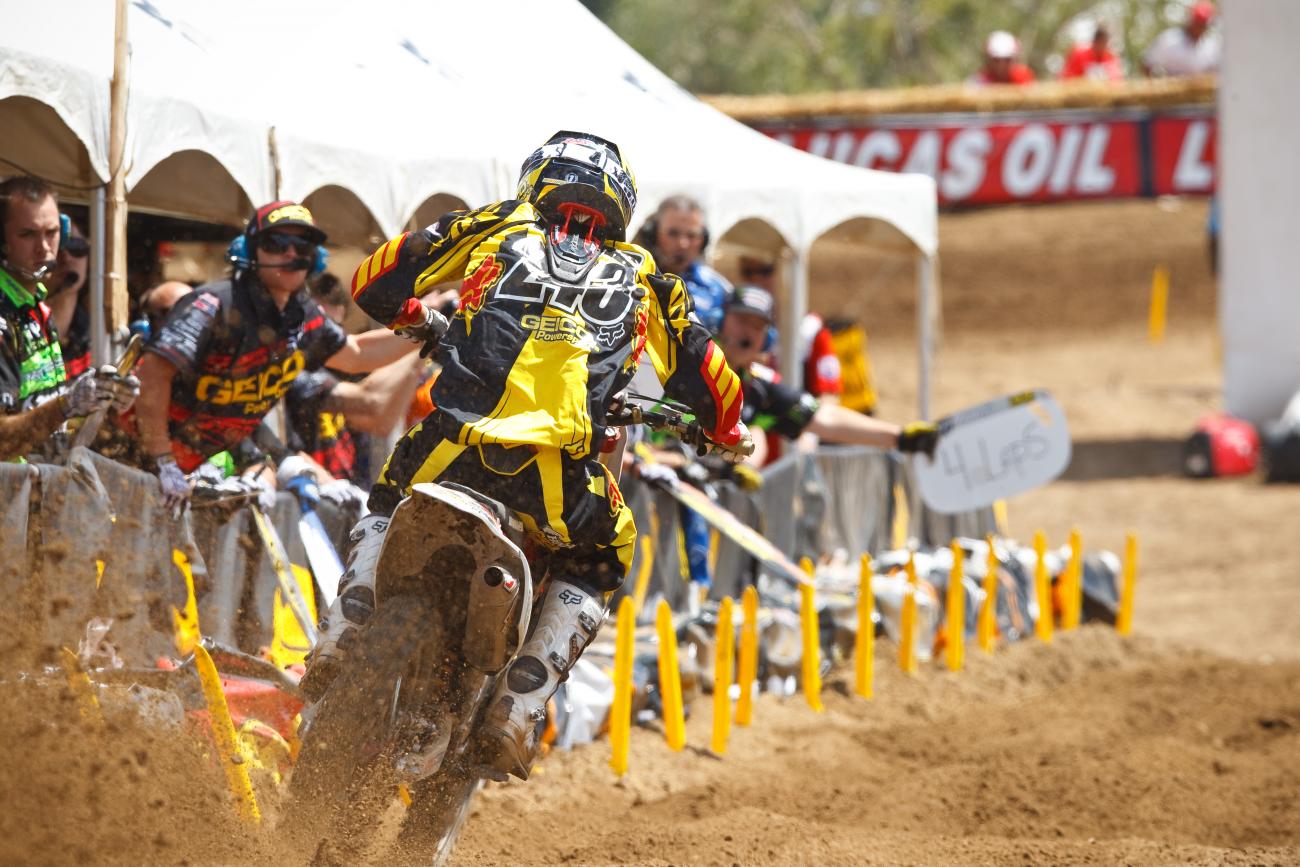 Back before Racer X was a magazine, it was a cult paper. I used to write just off-the-wall stuff ranging from random top-ten lists to whatever happened that particular night at Jeff Emig’s house. DC printed it and encouraged me to write more. At the time I really didn’t know how to write something that wasn’t ridiculous and pretty much insignificant.

DC said I was a natural story-teller and told me to just write like I speak. He also mentioned that his favorite writers kept it simple. He told me to read Ernest Hemingway. So I read The Old Man and the Sea, For Whom the Bell Tolls, and The Sun Also Rises to educate myself. Let’s be honest, I had to be the only rider flying to the races reading Hemingway.

Not long after, it all made sense. I want to thank Davey for his literary and journalistic lessons, which haven’t been forgotten or unappreciated. My all-time favorite moto writer was and still is Eric Johnson. He mixes his passion of moto history with the irony of today. I wish I could write like that, but instead I still tell foolish tales. For example, I worked a long Tuesday and into the night helping my friends, the Tesmer brothers, build a deck. With a Wednesday-morning deadline for this piece, I got out before dark to try and make it happen. But then I saw Gene Wilder and Richard Pryor in Stir Crazy just starting on TV.

Ninety minutes later, This is the End with James Franco and Seth Rogan starts. Crap! Still on hold.

Well, enough is enough. Let’s get to this week’s Revolver. As Navin R. Johnson once famously bellowed, “The new phone book’s here! The new phone book’s here!” Steve Martin's The Jerk and the phone book may be extinct, but the Lucas Oil Pro Motocross Championship has arrived and is bigger and as popular as ever. Supercross-only contracts are dead, and it’s time for the sport to get back to the basics.

Now, I love supercross. Let’s be honest, my biggest dirt bike success came from inside a stadium. But we weren’t inside of stadiums as 6-year-old kids when we started racing. We were out in the dirt, under the trees, in the mud. We were hunting eggs in the woods on Easter Sunday as kids. The Nationals are back to basics—the roots.

My very first national can’t be found anywhere. Not in Racer X's Vault. Nowhere on the web. It’s almost as it didn’t happen! It was August 23, 1987. I had just turned 17 and won both Schoolboy classes at Loretta’s, and we decided it was time to turn pro so we headed to Millville, Minnesota, for the final national of the year.

Back then, Kawasaki's 125 program was run through DMC, kind of like Pro Circuit does today. I was a DMC kid, and the pro team took me under their wing for the weekend. Their riders at the time were Eddie Warren, Tyson Vohland, and Bader Manneh, and I spent all Saturday practice day chasing these guys around. I felt great. My speed was there throughout the day, and I was confident I would crack the top fifteen or even the top ten come Sunday. But fate had other plans for me.

Sunday morning, the qualifiers arrive. I proceed to get cleaned out in the first turn of my heat (yeah, kids, back then we qualified with heat races, not timed qualifying). Off to the LCQ. I’m in third on the second lap behind Missouri’s Jeff Schumacher, and I tuck the front end in a rut at the bottom of the hill before what is now the Holy Schmidt jump. Just like that, my day is done. I rode back to the pits almost in tears. My dad just chuckled and said, "Well, get ‘em next time." I spent the rest of the day walking the hills with a couple of buddies watching Schmidt and RJ destroy everyone else.

My first true national wouldn’t come until June 5 the following season down in the heat of San Antonio, Texas. It was 105 degrees and humid from the rains the night before. The track was a swamp for practice Sunday morning, but by the motos it had developed that usual crust and one main rut and line around the track. Only problem was the start was still a complete muddy mess considering it was barely used all day, except for one section: the very outside edge where everyone walked and the riders and mechanics pushed their bikes to the line. And my dad recognized it. He says, "What do you think about the last gate on the outside? Get up on that dry stuff and you got this."

Still to this day I’m not sure how no one else saw or caught that. Seems like a pretty popular move these days. Well, no one caught it that 125 first moto that day. The gate drops, I jump up on the dry stuff, and I sweep across the front of everyone for the holeshot. I led my first national for exactly one lap; then I tipped over in a tight chicane rut on lap two. I still managed to hold on for a fifth. Local Texan Jason Langford led until the last lap when George Holland passed him for the win.

I’ll never forget lying in the pits. On the ground. With ice packs on my wrists. I was spent. Then the second-moto horn rang out. Bahhhhhhh! I’m like, what? Already? I’m pretty sure I was still cramping on the line when the gate dropped for the second moto. I salvaged a sixteenth for 5-16 scores and tenth overall, a much better day than Spring Creek the year before. George Holland went on to win the overall over Kehoe and Guy Cooper.

You know someone who had a much, much better national debut? Eli Tomac. A 3-1 landed him on top of the box at his very first pro race at the 2010 Hangtown National. Now that’s how you kick off a pro career. Five years later, the still-young Tomac just put down one of the biggest beat-downs of the modern era. He won by ninety-one seconds to be exact. Now I admit, I’ve been a little critical of some of Eli’s recent supercrosses. I believe I Tweeted during Vegas when he crashed, "I’ve never seen someone as capable as Eli brain fart as often as he does."

Well, they didn’t show much of him on TV during his second moto destruction, but on the lap they did, he was absolutely flawless on one of the gnarliest tracks I’ve ever seen. He was hopping bumps and flowing through the ruts. That triple-step down on the left side of the track followed by the 150-footer? Pure butter. Wheeling down through the mechanics area. It was to fun to watch, even back home on my couch. He said on the podium how good his bike was working, and, man, you could see it. Nice work to the GEICO Honda team for putting the perfect set-up under him, and congratulations to Mr. Tomac, because that second moto will go down in history. Also, I’ll rethink my tweeting.

The series heads to the mountains of Glen Helen, but that’s a story for another time. Thanks for reading another Revolver. See you next week.