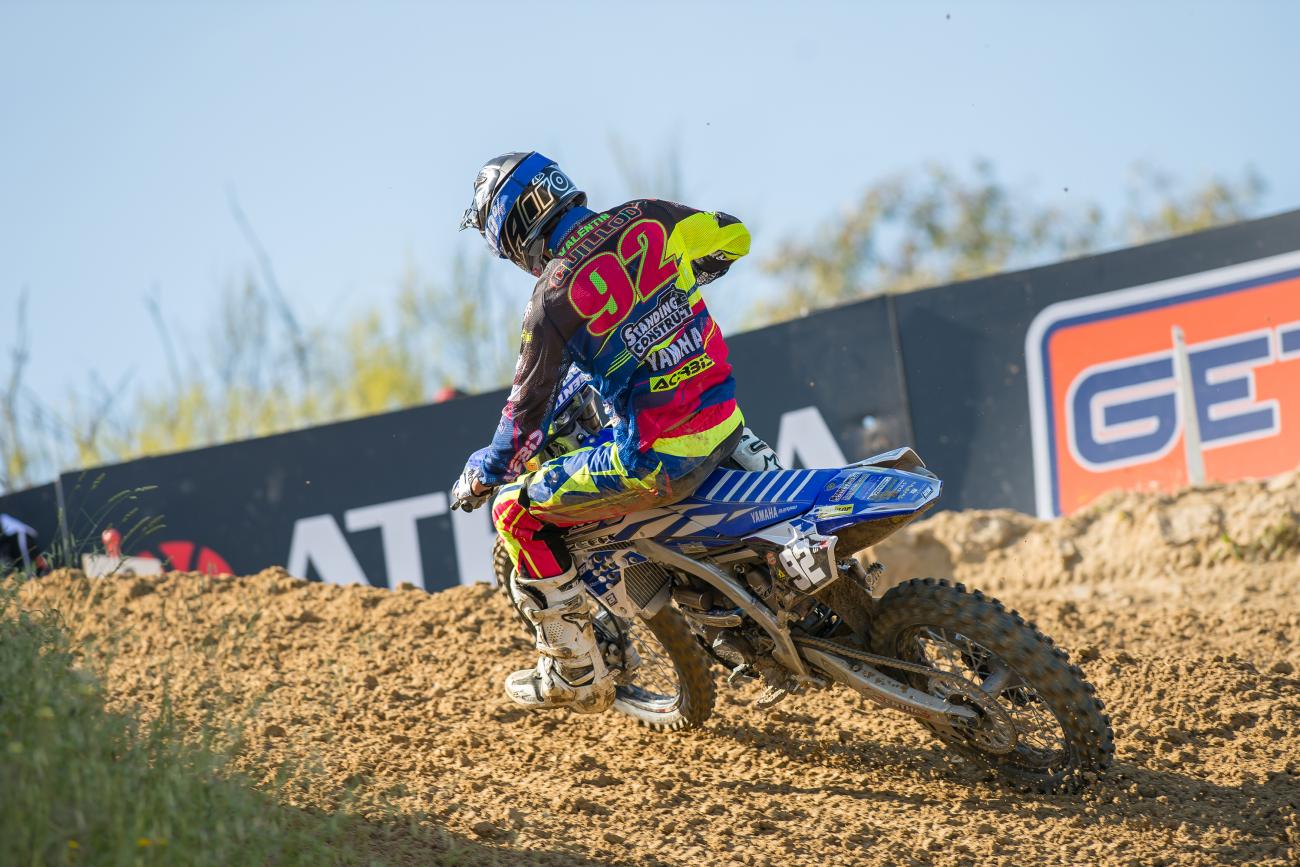 For many, switching motorcycles almost a third of the way into a championship campaign could carry a hefty degree of risk. But then again, if you’re an eight-time world champ with six consecutive titles in the premier class of the FIM World Motocross Championship, what’s an extra 100cc?

Red Bull KTM’s Tony Cairoli decided that the company’s already decorated 2016 450 SX-F was going to be his weapon of choice for round six at the Grand Prix of Spain, held around the narrow undulating curves of Talavera de la Reina for the second year in a row. With his first overall win of the year—a 3-1—and the first overall win since the Belgian GP back in August, Cairoli will compete on the bigger bike for the rest of 2015. Cairoli insisted that he had tested the 2016 pre-production model heavily during the winter and only the lingering effects of his Motocross of Nations knee injury made him begin the season on the previously all-conquering 350 SX-F. After a disappointing outing in Holland two weeks ago that ended his five-year dominant run at that track that matched teammate Jeffrey Herlings in MX2, Cairoli decided that it was time to unleash the big gun.

Whether it’s because the 450 SX-F is so fettled (this is essentially the same bike Ryan Dungey won on in supercross under the Factory Edition name, but will be the standard production bike for 2016, debuting in about a month) or whether Cairoli felt he needed something more to take on the lethal starting consistency of Rockstar Suzuki’s Clement Desalle or the general pace-setting speed of Red Bull IceOne Husqvarna’s Max Nagl is open to debate. It was certainly odd to see the world champion riding on the torque of the bike instead of the usual pitched hum of the 350 where corner speed and higher gearing were previous Cairoli hallmarks.

In front of a decent crowd sheltering from the hot sunshine south of Madrid, Cairoli fluffed the start in the first moto and had to watch Nagl and Desalle ahead of him, but came back in the second race and posted his first win on a 450 since a run in the 2013 season-ending Grand Prix of Benelux in Holland.

Dedicating the win to his late father Bene, who last saw his son in action at Talavera a year ago, Cairoli says, “I’m happy to have the overall victory, finally. I’m not quite used to the power of the bike, and in the first moto I think my arms were longer than normal after three laps. I was hanging for about ten minutes.”

It was actually KTM’s first triumph with the 450 since Nagl used the 2010 version to win that same year in Bulgaria. Today Nagl is on the Husqvarna and holds a 30-point lead over Cairoli.

“I did not find the perfect lines like I did in the first race and was searching for many options,” Nagl says. “I was third and just couldn't go any faster, but for the championship lead it was a good race. I have never been in this position in my career so I really want to try and go for it now.”

Nagl holds a 12-point lead over Clement Desalle, who crashed for the third Grand Prix in a row when a kicker sent him over the bars on the first lap of the second race. The Belgian escaped uninjured and kept ahead of impressive British Champion Shaun Simpson, who was sixth on the Hitachi Construction Machinery Revo KTM (the privateer is on the old 450 SX-F model but is still the brand’s second-best racer in MXGP). Simpson’s overall score was ruined by a rear brake failure in the first moto. Another KTM rider, Tommy Searle, wasn’t as lucky; he went down on the same leap as Desalle and picked up a shoulder injury. He will undergo an MRI on Monday.

A static first race—also in MX2—turned into a more watchable second race, as the punishing five-class schedule had worn the track into a myriad of strange bumps and the technical level of the winding layout had increased. Cairoli faced opposition from a superb Yamaha Factory Racing’s Romain Febvre, who is defying his rookie status and finding a regularly notable groove on the YZ450FM. The Frenchman was fourth in moto 1 but pushed to first, briefly stalled the bike (and restarted with the machine’s prototype electric system), and kept with Cairoli to the flag. Febvre’s speed ensured the rookie third place—his first podium appearance in the class. He only completed his first full time GP season four years ago.

After total dominance two weeks ago in Holland, Team HRC’s Gautier Paulin was nowhere near as formidable in Spain and his starts were again cause for frustration. In the second moto he tangled with IceOne’s Todd Waters and had to restart from the back of the pack. Teammate Evgeny Bobryshev was more competitive and finished fifth overall.

Monster Energy Kawasaki’s Tyla Rattray had a reasonable day with seventh in the MXGP class. The South African was again alone in the KRT awning with Ryan Villopoto in the US allegedly seeking guidance from Aldon Baker and some recovery options for his fractured coccyx. Spanish fans still gathered around the Kawasaki truck for a view of the #2 KX450F. It is unknown at this time whether RV will be back in two weeks for the GP of Great Britain.

If Yamaha were pleased with Febvre’s progress in MXGP (teammate Jeremy Van Horebeek is due to have a cast removed from his left foot Monday), then they were delighted in MX2 when Standing Construct Valentin Guillod’s finished with a 6-1 scorecard and gave the YZ250F its first success since August last year. Red Bull KTM’s Jeffrey Herlings turned a sixth straight pole position on Saturday—earned despite the keen speed of Thomas Covington; sadly the young American could not replicate the same starting potency on Sunday and was fifteenth overall—into a first moto victory with Monster Energy DRT Kawasaki’s Max Anstie disturbing his peace. Again the opening MX2 sprint had nothing to get excited about even though Dylan Ferrandis’ DNF after an altercation left the back of the Kawasaki destroyed and could have had repercussions for his championship aspirations.

The second MX2 moto was a bevvy of action, position swapping, and continual shift for the podium. Anstie started badly and Ferrandis led with Guillod in pursuit for the duration and seemingly risking a pitch into the freshly watered and slick mud. Team HRC’s Tim Gajser was another rider on the ragged edge, and if he hadn’t crashed in the first moto, then he would have been another podium contender. The most surprising crash was Herlings’. Losing front wheel grip and being flicked almost off the bike on a jump take-off, he was chucked to the ground and sported the red marks of a nasty head plant in the press conference after the race.

He was still able to bang a bent set of bars into reasonable shape and start a charge from the back of the top twenty that culminated in seventh. He overtook Anstie, which cost the Brit his first champagne of the year. Jordi Tixier saw his chances of the overall evaporate when Guillod finally relegated Ferrandis with just two laps to go. It was breathless stuff and fantastic entertainment. Most of the top ten jumped across the finish line unsure of their placing.

The Grand Prix was home to another full support program of European Championship races, and the three extra classes meant the track was in continual use throughout the weekend. Maxime Desprey ruled EMX250—MX2’s principal filter stream—while Yentel Martens showed a deft touch in the two-stroke EMX300 category. Finally the victory in EMX125 by Josiah Natzke is perhaps New Zealand’s first significant international success since Ben Townley claimed a checkered flag at the U.S. Grand Prix in 2010 on the TLD Honda (and won at Thunder Valley in the Motocross of Nations the same year). Natzke is negotiating his first year in the European series and is mentored by no other than BT himself. Spaniard Jorge Prado beat Natzke by just seven-tenths of a second in the second race and the victory gave the success-starved home crowd reason to depart content.

MXGP heads onto former Motocross of Nations venue Matterley Basin for the Grand Prix of Great Britain on May 24.