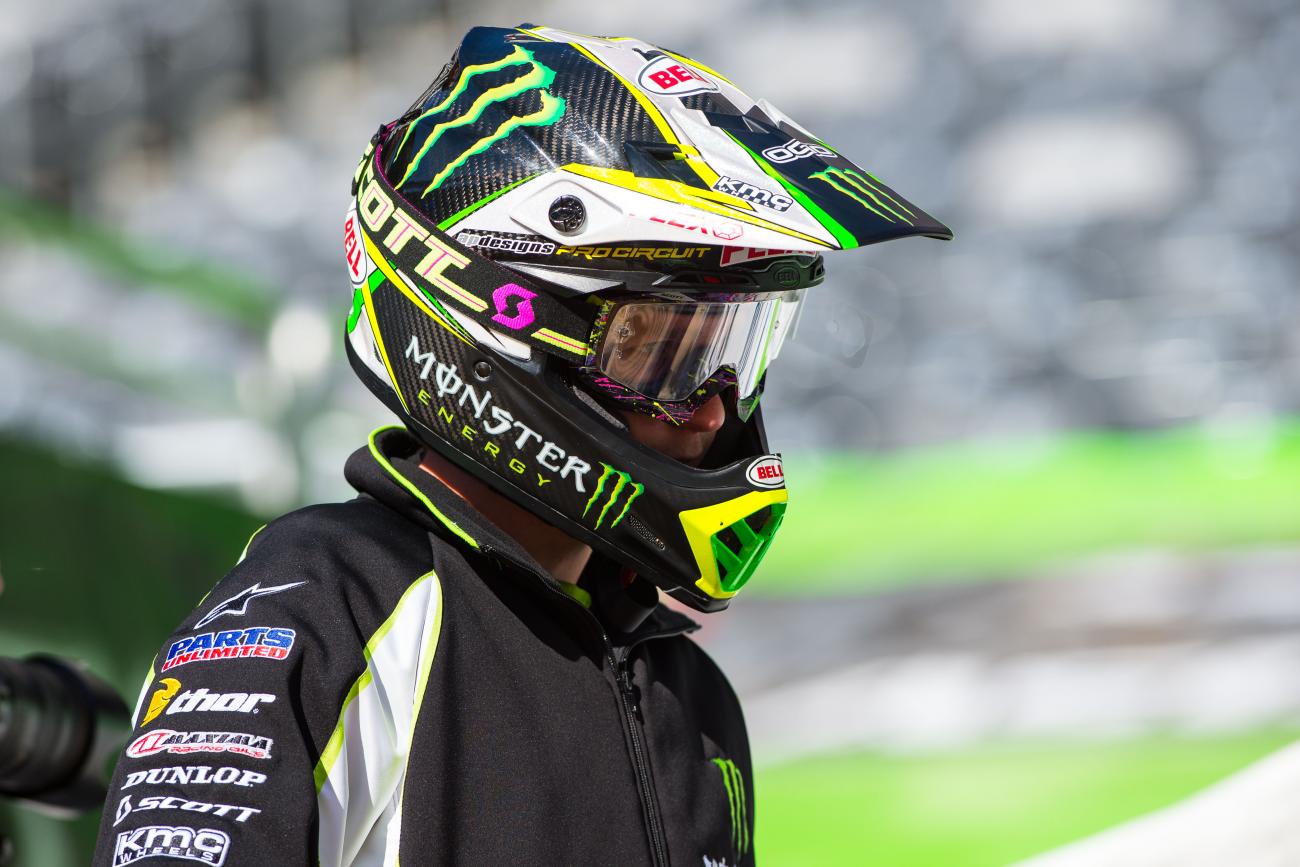 Unfortunate ending to a great 2015 Monster Energy Supercross campaign for new holeshot artist Andrew Short. In East Rutherford, Short grabbed another holeshot (shocker!!) and fended off valiant challenges from Broc Tickle, Jason Anderson, and, for a time anyway, Blake Baggett. But on the final lap, Short broke his kneecap. He was able to finish the race on his BTOSports.com KTM, holding off Tickle for fifth—his best finish since a fifth in Arlington. Short hesitated on a jump and Tickle nearly jumped into him on the last lap, Tickle went flying off the track and into a huge endo. But Tickle actually got up unhurt, while Short stuck his foot down into the ground and ended up breaking his kneecap. Short underwent surgery earlier this week and his trainer, Coach Seiji, posted a detailed message on Instagram regarding the procedure. Check it out below.

The finished product..so for those interested, a tapered pin was drilled through the broken patella piece and the length of the patella. Then the pin was used to fish through a line which was threaded through the bottom button. The lines were threaded through the top button and it was all cinched down to pull the patella together. You can hardly see the fracture line anymore. The small shadow at the bottom is just a calcium deposit. There is also a heavy gauge dissolvable suture going around the patella and through the patellar tendon which will allow Shorty to bend his knee for a while without putting any tension across the fracture line. I was stoked to see all this go down not just because it was cool but because it will totally make it clear to me what's going on during rehab, what he will feel and what to expect. Onward!

As for Tickle, he told us: “I saw him [Short] check up and I didn’t think he was going to jump the triple.” Shorty did, but Tickle had already changed his line and chaos ensued. “I was trying to get as close as I could,” Tickle said. “I was going to try to rail the outside of the turn [after the triple] and get a run on him in the whoops.” Chalk this all up to two dudes going for it on the last lap, and a rutted, rough track.

Over the last six rounds, Tickle has finished 8-7-9-8-12-6. “We made a couple changes before the main and went in the right direction, but the start was terrible in the main event,” Tickle said in an RCH/Soaring Eagle/Jimmy John’s Suzuki statement. “I got a crappy jump and got pinched off. I think I came around the first corner almost last. I worked past a group of guys, got up to ninth or eighth, and guys just started making mistakes and losing positions. I definitely felt better this week. I had more intensity. I had a lot of fun riding outdoors last week, so I think changing my routine made a big difference.”

Blake Baggett’s main goal this season was to make it through all seventeen rounds. Supercross is a grind, and Baggett wanted to make sure to get as much learning experience he could this year. The last few weeks haven’t gone Baggett’s way. He hasn’t been bad, but he dealt with an illness in St. Louis, crashed when Davi Millsaps ran into the back of him in Houston, and generally hasn’t been the same guy who was challenging for podiums earlier in the year. East Rutherford saw a much different Baggett as he charged from a bad start to get Short for fourth, his best finish since a podium at Daytona. “I didn’t get the greatest start and was pretty buried, but I just plugged away and worked my way forward, and I ended up getting up to fourth,” he said in a Yoshimura Suzuki team statement. “Third was still a little bit in front of us. I was probably slowly inching up on them, but the track was technical today, which made it hard not to make a mistake in pretty much every rhythm lane. It was hard to get a full clean run in the rhythm lanes, much less a full clean lap. I’m going to keep working to close out the series strong and I look forward to Las Vegas.”

Lucas Oil/Troy Lee Designs KTM’s Shane McElrath made his 450SX debut at East Rutherford. While his graphics said TLD, it was actually the injured Dean Wilson’s bike that he was riding. Either way, McElrath was quite impressive, finishing eleventh, but looking much, much better. “I didn’t feel too good in that first practice,” McElrath told us. “Then I watched the video and I didn’t look as bad as I felt, so that actually made me feel better. That’s still a big bike to throw around.

“It’s different only having four riders taken out of the heat,” said McElrath in a team statement. “It’s the same amount of laps, but you have to work quick, and I made mistakes that cost me the qualifying spot. The semi was a bummer because I felt like I had the speed to definitely get through, but went down. It’s all a learning experience.” There had to be quite a bit of pressure on McElrath in that LCQ, since the team sent the semi truck all the way from Santa Clara to New Jersey, just to have to drive back to Las Vegas this weekend, all for McElrath to ride solo. He had to make that main event!

Discount Tire/TwoTwo Motorsports’ Chad Reed was a late scratch in East Rutherford due to a shoulder injury. He hurt himself in that big crash early in last week’s main event, where he was making a bid for the lead. Reed tried to give it a go in the first practice, but pulled off early and didn’t ride the second practice. On Instagram yesterday, Reed said he is doing everything he can to race this weekend. We will provide an update on Reed’s status later this week.

Reed’s teammate, Josh Grant, didn’t line up for second practice either, as he was battling an illness. He was able to race that night and soldiered to a seventh-place finish, his eighth top-ten in the last ten rounds.

Another huge crash for Weston Peick, this time in a heat race. The track featured a very tricky dragon’s back-to-table section that would be tough, normally, but was made much harder with the soft dirt and ruts. The jump claimed 250 riders Jimmy Decotis and Justin Bogle in practice, and Peick crashed on it in his heat and was drilled by his bike. Peick was left with a bloody back, and his bike was mangled. He made it to the line just in time for his semi and made the main, and even ran up front early, but no doubt the soreness kicked in and he faded back to tenth.

Peick’s Autotrader.com/Toyota/JGR Yamaha teammate Justin Barcia continues to struggle in his return to racing after breaking his pelvis earlier in the season. His day in New Jersey was made worse when he cased the top of the over-under bridge, and Baggett drilled him from behind. Barcia was lucky to not end up hurt again. He finished twentieth.

Quiz anyone at the race and they would have sworn Eli Tomac had the fastest lap of anyone. It was actually Ryan Dungey who logged the fastest time. Dungey revealed to us that Tomac did the most damage in the final five laps of the main event, when the track was at its worst.

Marvin Musquin is just a dynamo right now. We'll see how it goes against the boys from the West this weekend.

The at times turbulent Monster Energy Supercross rookie seasons for GEICO Honda’s RJ Hampshire and Jordon Smith have come to an end. It was an up and down campaign for the new recruits, more so for Smith, that saw a mixture of spectacular speed combined with spectacular crashes. Hampshire battled through injuries all season, too, but still managed to make seven of eight mains (missed St. Louis with injury) and finished fifth in points. He also garnered a podium (Indy) and two additional top-fives, including one at East Rutherford.

"We pulled it together with fifteen solid laps," Hampshire said in a team press release. "That's all we needed. I was battling [Anthony] Rodriguez, and he was tied with me in the points, so to come away with fifth overall in my rookie season, I'm pumped about that. It was a solid, consistent season."

As for Smith, East Rutherford brought more pain than gain. Smith aggravated a shoulder injury in practice and pulled out early in his heat race. Smith’s unbridled speed often left him on the ground, but he showed promise with a fourth in Indy. If he can figure out a method to the madness, his future is bright. Hopefully, his shoulder will allow him to open up outdoors.

Joey Savatgy ended his first Monster Energy Supercross 250SX East Region campaign with Monster Energy/Pro Circuit Kawasaki on a high-note. While Savatgy wasn’t able to reach the top step of the podium, he did have four podiums in 2015, including three straight to end the season. “It was difficult out there,” said Savatgy in a team statement. “I’m happy to be on the podium, but I wanted to get a win for my team. These guys have worked really hard and we all want more than podiums. It was a good battle out there and I rode smart to make sure I didn’t lose any positions.”

A good battle out there? Savatgy’s podium didn’t come without some controversy, though. He had a heated battle with Yamalube/Star Racing Yamaha’s Jeremy Martin for third in the main. Savatgy took Martin high a few times, even pushing him off the track at one point. Martin made a final attempt with two to go, running strong through the whoops, but he lost the front end exiting and went down. He settled for fourth. Although they train at the same facility, Ricky Carmichael’s Farm, there is no love lost between the two, and we hear they even work out of separate garages and ride at different times in order to avoid each other! Savatgy talked with Jim Holley of Race Day Live! after the race about the battle. Check it out below.

Following a disastrous 2014 campaign that ended early with a shoulder injury, MotoSport.com/GPI/Honda’s Kyle Peters rebounded with a solid 2015 season. The North Carolina native garnered five top-tens in eight rounds and ended the season with a season’s best sixth. With Jimmy Decotis ailing from a practice crash and only able to manage eighteenth, Peters sneaked in and grabbed seventh in points—the first non-factory rider in the field.

Decotis, as mentioned earlier, had a big crash on that dragon’s back to table section in practice, and it certainly slowed him throughout the day program.

CycleTrader.com/Rock River Yamaha’s Luke Renzland capped a successful rookie season with his second consecutive top-ten at his home race. Renzland calls Florida home now, but he grew up in New Jersey and did a lot of racing there. He finished 1 point out of tenth in the standings behind Martin Davalos. “The amount of support I had in the pits was mind blowing, the energy was definitely electric! I struggled with my starts all day, and I was putting myself at a huge deficit at the beginning of the races which doesn't help at all,” he said on Instagram. “I came back to 10th in the main which was a good ride considering where I started, but I know I had so much more to offer if I started with the guys I belonged with.”