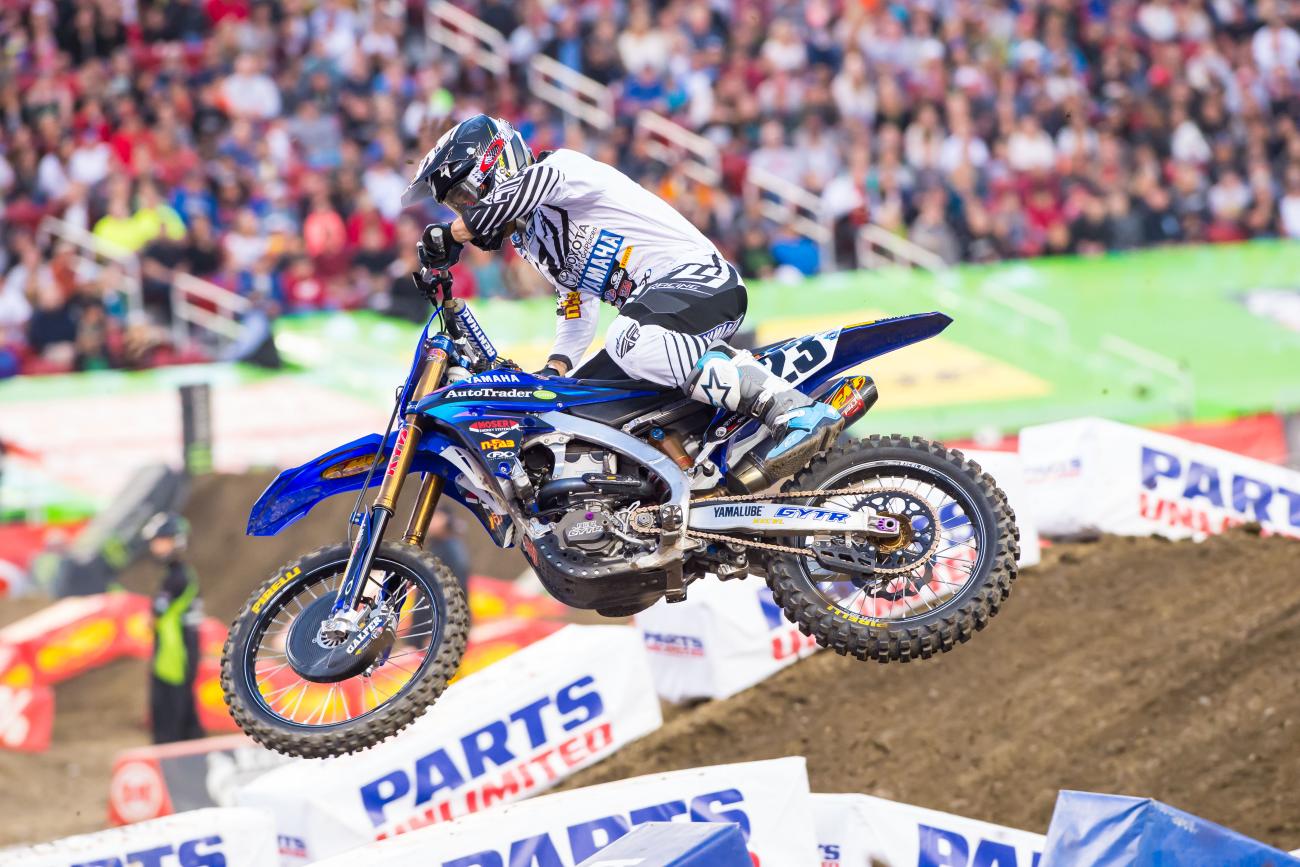 Last Saturday, Weston Peick landed on the podium for the first time in his career. All the way back in Phoenix, he ran third for sixteen laps and many thought a podium would shortly follow. He injured his foot that night, though, leaving him out of action for a little over a  month and setting him back in his progress. When he returned, the speed was still there and he actually led laps in Atlanta, but he would fade backwards as the high pace took its toll. The key, though, was that he actually was able to run the pace. That’s a quality that only a few riders in this field have. Elite-level speed is hard to come by and richly rewarded. The key for Weston lately has been finding a way to sustain that level of intensity for all twenty laps.

While he’s going extremely fast, if you watch the riders around him, they seem to be doing it with much less effort, because they are riding with much less effort. Weston is just recently attaining this pace. Riders like Ryan Dungey, Eli Tomac, Chad Reed, Ken Roczen, etc. have been winning races for years so they know what it takes to be there. Weston is able to ride as fast or faster, but for now, he has to ride so hard that he simply wears himself out. If Dungey is riding at 90 percent effort, Weston is at 100 percent. It’s not that Dungey is trying less; he is just more comfortable with the pace and able to relax more than Weston. The comfort level allows him to control his breathing, keep his heart rate lower, and extend his endurance.

You can see it in their riding, too. Weston is very animated, pushing and pulling the bike where he wants it to go. He’s doing everything in his power to go faster. He has to use every bit of intensity to reach that elite pace. Dungey’s able to let the bike to move a bit more freely. This pace is much more familiar to Dungey, and the relaxed body movements indicate that. That lessened rate of exertion provides Dungey with an ability to maintain the same pace long after Weston can sustain it. While Weston is sprinting with every bit of speed he can find, Dungey is in more of a sustainable rate of exertion—it’s like a hard run for Dungey versus an all-out sprint for Peick. If Weston can continue to run up front, this will become easier and easier for him. The pace that was impossible to maintain will begin to “slow down” for him both mentally and physically.

Think of it this way: When college quarterbacks move into the NFL, the first thing that they all say is “the game is so much faster.” All of the players are moving faster, the schemes are much more complex, and their cognitive function must accelerate to keep up. In essence, the world around them just upshifted, and at first, it’s difficult to step into that faster pace. As time moves on, the complexities will make more sense and players will understand what they are seeing more easily. The pace of the game will begin to “slow down” for them. For Weston, it’s no different. As he spends more and more time at the front of the pack, the pace will “slow down” for him, too. He won’t be as nervous, which will allow him to breathe in rhythm and control his heart rate, and onward the ball bounces. He’s in the middle of this process right now.

My hat is off to you, Weston. You have arrived.