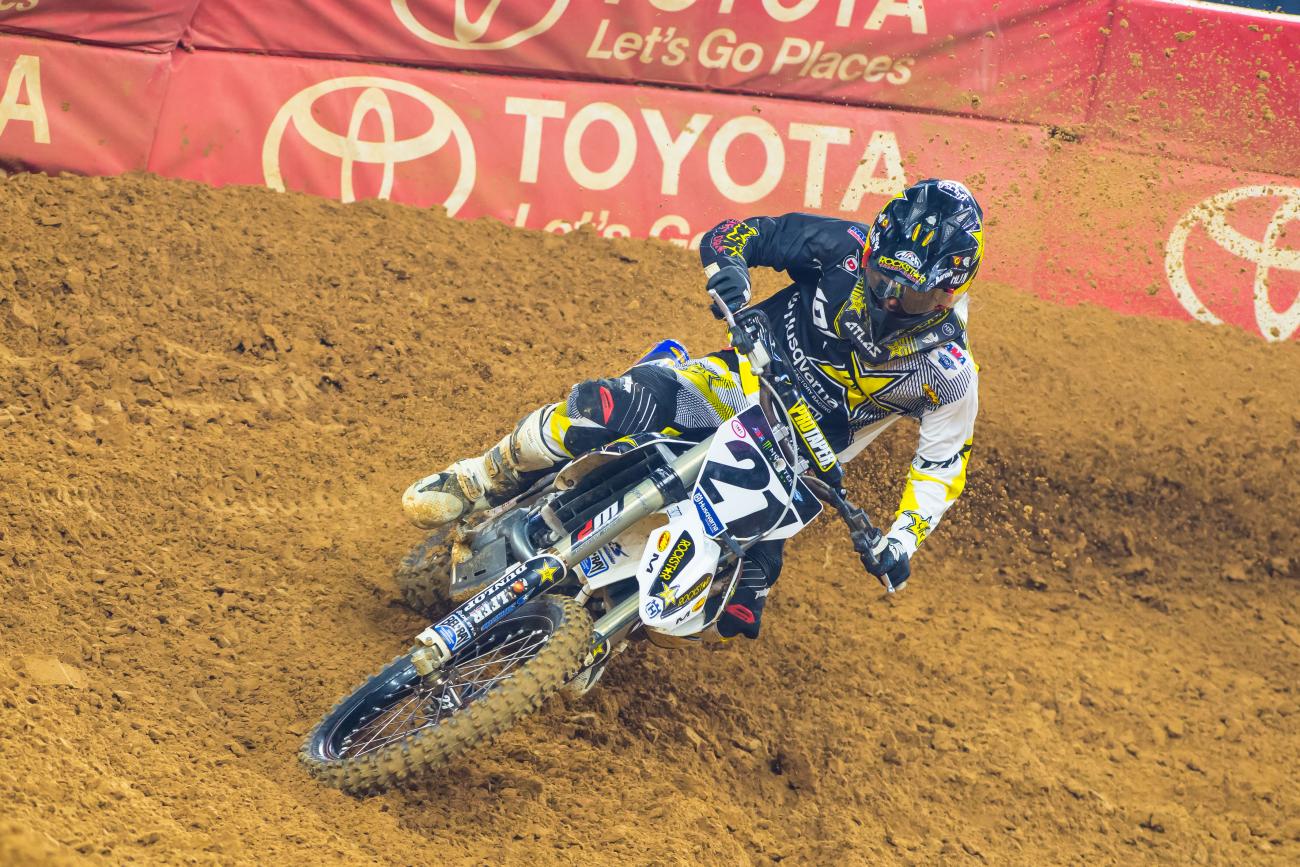 3 on 3 Questions After Houston

1. Is Ryan Dungey's title in any way tainted by the absence of Ryan Villopoto?

Chase Stallo: I’ll take a big fat no for $500, Jason. Of course you’re going to hear the “Well, if RV was there, he wouldn’t have won.” And maybe that’s the case. BUT NO ONE KNOWS. What I do know is Dungey has dominated a series that features Ken Roczen, Eli Tomac, Trey Canard, Chad Reed, Cole Seely, and Davi Millsaps among others. If you’re discounting Dungey’s championship, it means you’re discounting those riders. Which is complete blasphemy. Those are some of the most talented riders in the world. Case closed. As I wrote yesterday, let’s enjoy this for what it is—a fantastic series, by a fantastic rider. Golf claps all around.

Jason Thomas: I think it really depends on whom you talk to. For me, it doesn't. Ryan Dungey has no say in whether or not Ryan Villopoto shows up to race in America. All he can control is his own situation and go try to beat whoever lines up on all of those Saturday nights between January and May. His detractors will always want to point to the fact that RV was absent, but as I said, what can Ryan Dungey do about that? He went out and absolutely torched the series, wrapping up the title with three races remaining. There are no asterisks on championships.

Steve Matthes: No, no, no. You can't say that. There are no asterisks in sports. Sure, we can bench race and talk about what would've happened if RV was there, but he wasn't and Dungey won. End of story. Ryan's team manager, Roger DeCoster, thinks Ryan is riding better than ever, and Dungey says he feels better and loves his new bike, so I do think we're seeing a better Ryan Dungey this year than last year. Whether that would've been enough to beat RV is left to the fans to debate. Dungey's got the trophy, the check, and the title—that's all that matters.

2. Are you surprised Cooper Webb was this dominant?

Stallo: Yes and no. Before the season, I said Webb would have the most wins in 250SX West Region. Did I think he would rip off five of seven? No. It’s not just that Webb has won; it’s the manner in which he’s won. He’s come from behind and won. He’s gotten great starts and won. He’s been hurt and won. He was easily the most dominant rider out west, which I’m not sure anyone saw coming, myself included.

JT: I knew he would be good, but this good? No. I really expected Justin Hill to put up much more of a fight, but that never materialized. Tyler Bowers was ready to battle, but Super Coop was just too good. To be completely frank, the rest of the field is very lucky that Webb's starts weren't better, because this could have been ugly. The only reason that Webb was in a battle at many rounds is that he started mid-pack or when Bowers used him as an apex. Great job by Cooper and his whole team.

Matthes: Not surprised he won the title, but winning five out of seven races and getting second in another to win the title? Yeah, probably surprised. I remember when Honda had some CRF150R race at Steel City and Webb was riding a JGR Honda, and I was told to watch him by Jeremy Albrecht of JGR. I’d heard of him but hadn't seen him ride until then, and you could tell that the kid had a ton of talent. This is just a coronation of sorts for a guy that's been on the rise; he's aggressive, he's stylish, and he's got the right amount of attitude to be a winner.

I also think that after years of being the laughingstock of the class, the Yamaha YZ250F reverse-engine design bike is really good, and that always helps. I'm not saying that's why Cooper won, but it didn't hurt either. Golf claps to Cooper, his team, and Yamaha.

3. Jason Anderson has been in a fair share of incidents lately. What's up with that?

Stallo: In my opinion, it’s mental mistakes by a rookie rider. I don’t think it’s dirty. Some riders may disagree with that, but again, it’s just an opinion. I didn’t see the Weston Peick incident clearly, so I won’t comment on that. I did, however, see the Chad Reed incident. And, to me, it looked like he got impatient and tried to force a pass that wasn’t there. It’s racing. It happens. Yes, Reed is probably not happy, nor should he be. But don’t let that influence your thought process on what it was—a mistake. Those are my two cents.

JT: I'm not quite sure what he is doing out there. As the question stated, this isn't the first incident we’ve seen. In Atlanta, he hit Peick so hard that it almost seemed an accident, but now I see it most likely wasn't. At Indianapolis he was involved in multiple run-ins, and some of them left me shaking my head as to what he could be thinking. This weekend in Houston, he ran into just about everyone he could reach, taking himself out in the process. He threw away a sure podium because of his poor choices and then grenaded himself after he got up. I’m not sure what his modus operandi is, but I can assure that if he continues to ride this aggressively, the field as a group will make his life much more difficult. Consistent moves like that aren't sustainable against the elite 450 riders. They can repay the favor when provoked, and he has a couple coming, it seems.

Matthes: I don't know. I was talking to a buddy of Jason's that agreed he was a little aggressive out there in Houston, but he mentioned that it's easier to tame a rider down rather than ask a passive rider to be more aggressive. And this person is right; Jason will get some frontier justice dished out to him by one of five guys I can think of, and he'll also realize how far he can push it. Like JT said, you can't bully any of these elite 450 racers—they will get you back. Still, I like Anderson's moxy, and he's exciting to watch. But then again, I'm not the guy on the ground.