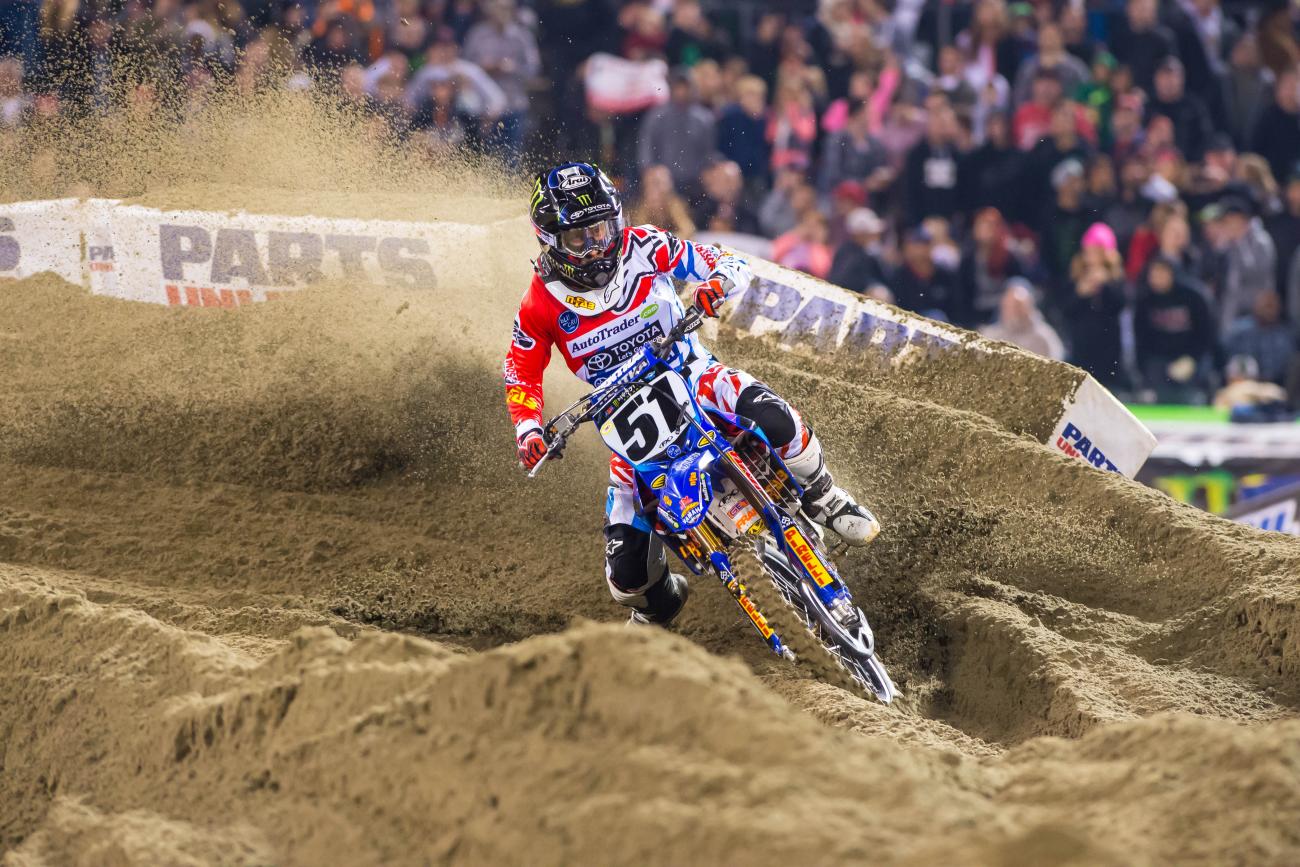 Jimmy Albertson – Shoulders
Comment: Albertson is out for the year after having surgery to fix worsening shoulder problems.

Mike Alessi – Back
Comment: Alessi wrenched his back in Daytona. He’s been undergoing therapy but hasn’t recovered as quickly as hoped. He'll miss the rest of the season.

Justin Barcia – Hip and Leg
Comment: Barcia crashed at the test track early in the season and sustained a small crack in his pelvic bone. He’s back on the bike, and even though he’s not 100 percent with his fitness, intends on racing in Houston. The team will have fill-in rider Phil Nicoletti on hand just in case.

Trey Canard – Arm
Comment: Canard underwent surgery to fix his left arm, which he fractured in Detroit. He hopes to be ready for the Lucas Oil Pro Motocross.

Sean Hackley – Concussion and Severe Hematoma
Comment: Hackley had a big crash in Arlington that sent him to the hospital with a concussion and severe hematoma on his back and legs. He’ll be back for Lucas Oil Pro Motocross. He’ll also be at the Racer X booth in the pits in Houston, so stop by and wish him well by buying a subscription!

Wil Hahn – Arm and Back
Comment: Monster Energy Kawasaki's Wil Hahn suffered a broken arm, ribs, and two vertebrae during practice at the season opener. He plans on coming back for Lucas Oil Pro Motocross.

Jared Hicks – Collarbone, Elbow, and Ribs
Comment: Hicks broke his collarbone, elbow, and several ribs while practicing. He’ll attempt to return for the final round in Las Vegas.

Josh Hill - Collarbone, Ribs, and Lung
Comment: CycleTrader.com/Rock River Yamaha's Josh Hill is out after a big crash in Daytona, where he broke his collarbone, injured his ribs, and suffered a collapsed lung. He’s done for the season and will likely miss a large portion of Lucas Oil Pro Motocross.

Robert Lind – Chest Wound
Comment: Lind crashed in practice and took a footpeg to the body. The result was a deep gash that ended up needing surgery. Lind will miss the rest of the supercross season.

Ken Roczen – Ankle
Comment: Ken Roczen crashed during practice in Daytona and further aggravated an ankle injury he’d been dealing with since casing a triple in Oakland. His plan was to return in Houston, but the team decided it was best to sit the weekend out. His status for the remaining races will be determined on a week-to-week basis.

Jake Weimer – Humerus, Lung, Throat, and Concussion.
Comment: Weimer had a big crash in Detroit after getting together with Trey Canard. He sustained a broken right humerus, collapsed left lung, concussion, fractured Adam’s apple, bruised vocal chords, and a split chin. He also has a blood clot in his throat. He’s out for the season and will likely miss at least a portion of Lucas Oil Pro Motocross.

Dean Wilson – Torn ACL/MCL
Comment: Wilson is out for the season after tearing his ACL and MCL at the KTM test track in January.

Dakota Alix – Elbow
Comment: Alix cracked his elbow at Indy and missed Detroit. He returned in St. Louis and will line up when the East Region resumes in New York.

Scott Champion – Fractured Scaphoid
Comment: Champion is back on the bike and will be back when the West resumes in Houston.

Adam Cianciarulo – Injured Shoulder
Comment: Cianciarulo is out for the supercross season after injuring himself in a preseason race overseas. He is expected to return for Lucas Oil Pro Motocross.

Martin Davalos – Epstein-Barr Virus
Comment: Davalos is struggling with Epstein-Barr virus and sat St. Louis out. He should be back when the East Region resumes in New York.

Darryn Durham – Wrist
Comment: Durham bent a screw in his wrist at the season opener and is focusing on his return for Lucas Oil Pro Motocross.

Vince Friese – Collarbone, Rib, and AC Separation
Comment: Friese had a big crash in Indy during practice and sustained a broken collarbone, broken rib, and grade-three AC separation. He'll miss the rest of the season.

Nick Gaines – Wrist
Comment: Gaines crashed in the heat race in Indianapolis and broke two bones in his wrist. He’s out for the season but hopes to return for Lucas Oil Pro Motocross.

Justin Hill – Ankle
Comment: Hill hurt his ankle in San Diego. He’ll be back at it this weekend.

Brady Kiesel – Wrist
Comment: Kiesel broke his wrist during the LCQ in Daytona. He underwent surgery and is likely out for the season.

Michael Leib – Leg
Comment: Leib underwent surgery to repair his right tib/fib, his right foot, right big toe, and left pinky toe after a crash in practice in Oakland. There is no timetable on his return.

Matt Lemoine – Finger
Comment: Lemoine missed Indy with a broken finger. He came back in Detroit but had a big crash during practice and missed St. Louis. He hopes to be back for New York.

Tracy Morgan – Hip, Heel, and Femur
Comment: Morgan is out for the season after a bad crash during practice in Arlington left him with a dislocated right hip, broken left heel, and broken left femur.

Jessy Nelson – Soreness
Comment: Nelson, currently second in 250SX West Region points, had a big crash while outdoor testing at Glen Helen a few weeks ago. He tried to ride this week to prep for Houston, but wasn’t 100 percent. The team has decided to hold him until Hangtown. "It's definitely tough to make that call, especially when you are sitting second in points," Jessy said of his decision in a team PR. "I have good people around me and we all think the smart move is to take the time I need and line back up when I'm completely ready. I'm already looking forward to Hangtown."

Colt Nichols – Knee
Comment: Nichols tore his ACL in St. Louis and will miss the rest of the season. There is no timetable on his return.

Jake Oswald – Collarbone
Comment: Oswald crashed at the season opener in Anaheim and sustained a broken collarbone. He had surgery and hopes to return in Houston.

Chris Plouffe – Ankle, Collarbone, Ribs, and Vertebrae
Comment: In Atlanta, Chris Plouffe sprained his left ankle, broke his left collarbone, broke multiple ribs, chipped his T2 vertebrae, and shattered his T10 vertebrae. After temporarily losing feeling below the waist Plouffe was removed from the track and taken to the hospital. He underwent surgery and had two rods and eight screws inserted in his back. He’s out for the season.

Landen Powell – Ribs
Comment: Powell crashed hard while practicing early in the season. He’ll be back in Houston.

Dakota Tedder – Hand
Comment: Tedder plans on returning to action for the Lucas Oil Pro Motocross Championship, where he’ll be aboard a 450.

Arnaud Tonus – Illness
Comment: Tonus is dealing with a virus and will return in New York.