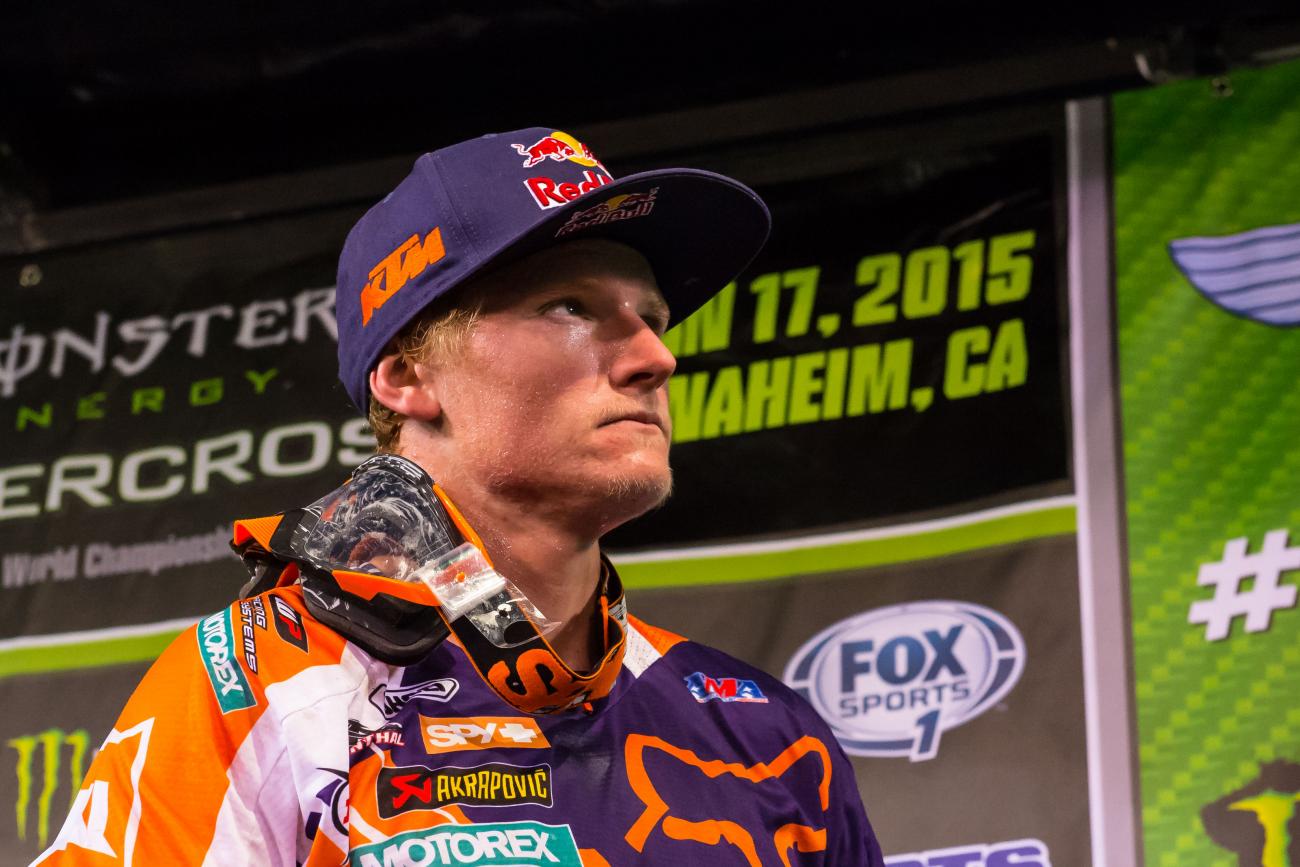 With only four races left in 2015 Monster Energy AMA Supercross, an FIM World Championship, it’s pretty safe to say that Ryan Dungey, with his 80-point lead over Eli Tomac, has this thing in the bag. In fact, the only non-injured riders who are mathematically still in the chase are Tomac and Cole Seely, but that’ll change in Houston. A win this weekend clinches the title for Dungey, and if Tomac wins, Dungey can still clinch it with third or better. In other words, expect Dungey to clinch his second 450SX Monster Energy Supercross Championship this weekend. –Aaron Hansel

We may also see another champion crowned this weekend when the West Region picks up again. With a 30-point lead over Jessy Nelson (who we hear might be out for the weekend with an injury), Cooper Webb will likely clinch his first professional title this weekend. The only other rider technically in the hunt is Tyler Bowers, but don’t expect things to stay that way. If Bowers wins, Webb clinches with a fourth or better. Barring disaster, Webb’s got this under control. –Hansel

It’s hard to believe that Tyler Bowers, a contender at the beginning of the season and still mathematically in the hunt, hasn’t won a race yet in 2015. He’s led laps and had several podiums, but he hasn’t been able to seal the deal on the checkers quite yet. In fact, it’s been a complete shutout for the entire Monster Energy/Pro Circuit Kawasaki team all year. With Chris Alldredge having a tumultuous rookie season, it’s up to Bowers to put an end to the drought out west. –Hansel

As surprising as Bowers’ lack of wins is, it’s just as surprising, if not more so, that Red Bull KTM’s Justin Hill is also winless in 2015. After coming out strong at the Monster Energy Cup and Red Bull Straight Rhythm, things just haven’t panned out for Hill in supercross. Like Bowers, Hill’s led laps and been on the podium several times, but the wins just haven’t followed, and he’s been in our Injury Report since hurting his leg in San Diego. Meanwhile, teammate Marvin Musquin has been making that Factory Edition 250SX-F look really good. Look for Hill to come back charging in Houston in an effort to end his unenviable streak. – Hansel

Two races have passed since the incident-filled afternoon in Indy between Anderson and Baggett (Anderson would later say Baggett was “being an idiot out there.”), but as luck would have it, the two have gotten together again—in the points that is. Both are tied for sixth place with 165 points each. There’s surely some pride on the line here with the two rookies. Let’s see who comes out of Houston with the upper hand. –Hansel

The Chizz has been on quite a roll lately. Yeah, it helps that some guys are injured, but part of supercross is staying healthy—for the entire seventeen rounds. Also, don’t discount his 13-13-14 results at A2, Oakland, and A3—when nearly everyone was healthy. Since Atlanta II, Chisholm has ripped off 13-12-11-11 finishes. While Chisholm won’t reach Weston Peick for thirteenth in points, he will pass the sidelined Jake Weimer for fourteenth this weekend—taking over top privateer honors. Chizz is still seeking his first top-ten finish since New Orleans in 2012, which seems to be within reach. –Chase Stallo

A Wey Into the Top Ten

Another rider inching closer to the top ten is veteran Nick Wey. Like Chisholm, Wey hasn’t reached the top ten since 2012—in Las Vegas. Wey scored twelfth-place finishes in Detroit and St. Louis—his best of the season. But you know the former podium regular wants more. Can Wey find a way to get it done this weekend? –Stallo

After seeing nearly the exact same layout at a few tracks this year, Houston will be the cure-all with a radically different design, the likes of which we’ve never seen before. The riders will take a rhythm lane in one direction after the start, and then work their way back to it and jump through in the other direction for the other nineteen laps. Crazy! Have a look at the animated track map to get an idea, and then take a guess on how the landings and faces will shape up. We hope no one gets lost out there! – Jason Weigandt

The injury-thinned 450SX Class needs some fresh blood, and we’re getting it this weekend with Autotrader.com/Toyota/JGR Yamaha’s Justin Barcia, who looks ready to race for the first time since Anaheim III. Barcia had a huge practice crash right before San Diego that left him with bone chips in his pelvis, and the recovery has taken longer than expected (although, seriously, would you expect to be back quickly from an injury like that?). We hear Barcia still might not be full-max on speed and fitness, but he’s expected to give it a go (and backup pilot Phil Nicoletti will be in Houston just in case). We don’t know how Barcia will do, but we do know it’s good to see some talent back out there. – Weigandt

There’s a little battle brewing for top ten in the final 450SX rankings, with Soaring RCH/Eagle/Jimmy John’s Suzuki’s Broc Tickle, BTOSports.com KTM’s Andrew Short, and Monster Energy Kawasaki’s Davi Millsaps. Tickle is ninth in the points and nine 9 of Short, who is 4 points ahead of Millsaps. Only two of these three can fit into the top ten, and they’ve all had good and bad segments of the season. Which one will end the strongest? – Weigandt