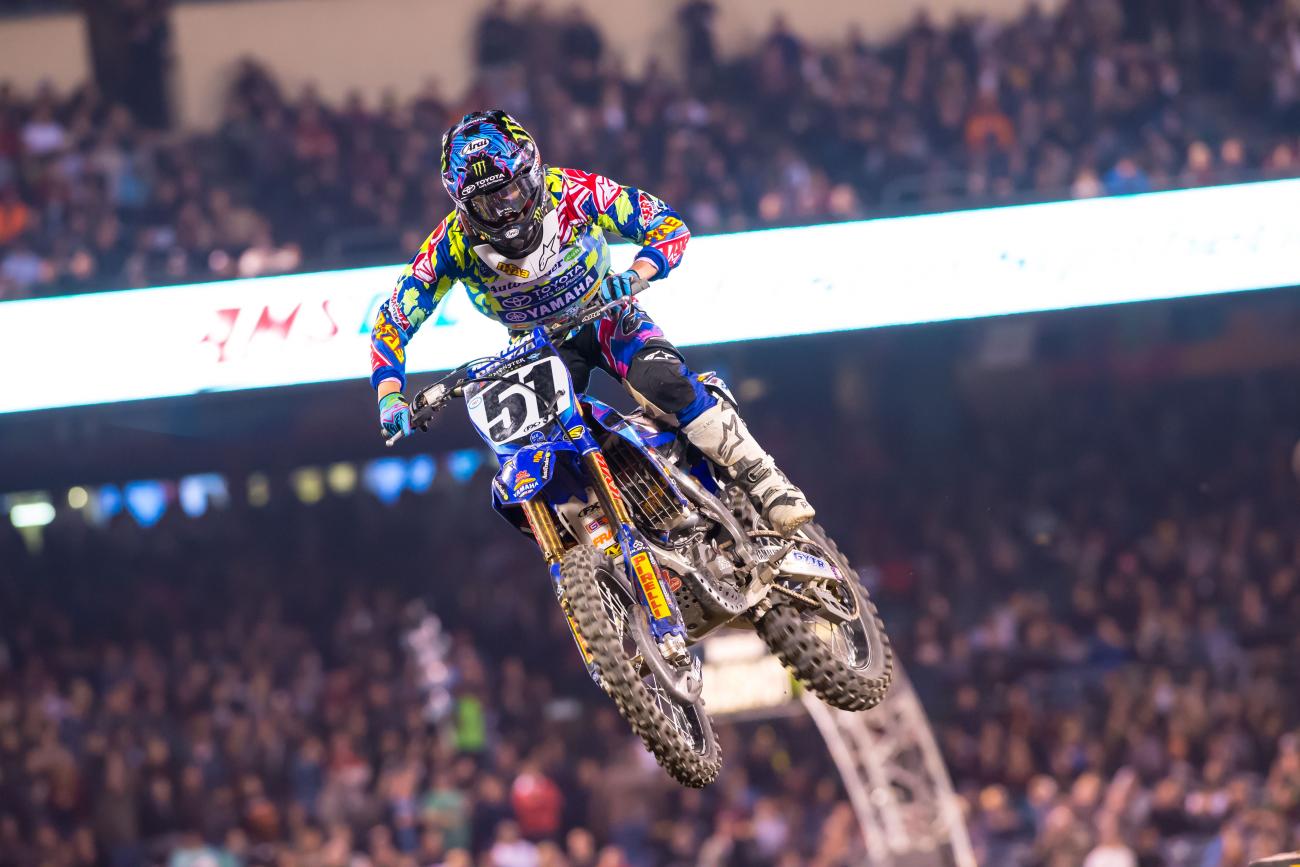 1. What did you think of the GP in Argentina?

Chase Stallo: After opening the season at two of the worst tracks imaginable—Qatar and Thailand—I really enjoyed the track in Argentina. The dirt looked great, the track was wide and offered numerous lines, and the elevation was good. As for the racing: I thought it was great. The difference in racing styles in GPs compared to the US was noticeable in Argentina. (Not saying one is better than the other. Just an observation.) If you’ve watched GPs at all in the last few years, I’m not telling you anything new. In GPs, it’s not go, go, go. They tend to attack in waves. For example, in the first MXGP moto, Antonio Cairoli pressured Clement Desalle early, took a brief lead (about 1.2 seconds), and then backed off until a really tenacious attack on the final lap. It was fun to watch the cat and mouse game a lot of riders were playing.

As for Ryan Villopoto, I think we need to relax a bit. Remember when we thought the world was ending after Qatar? Oh, yeah, he won the next round. Look, he’s going to have troubles adjusting to everything. If his problems continue five rounds from now, then we can panic. For now, he’s doing more than okay and still has a great shot at the championship.

Jason Thomas: I thought the event looked awesome. All of the background photos I saw looked to make up one of the most scenic motocross races ever. The track was insanely fast and I saw a ton of crashes and near crashes. That part didn't look so great, but overall it looked like a success as a new event.

As for the racing, it was interesting to watch RV and his approach. His lines seemed to be very unorthodox, and honestly, not very good. He was going much further around the track than necessary compared to his competition. His lines added so much distance to each lap, I could see why he struggled very plainly. It was frustrating to watch on television, knowing where he was losing time.

Steve Matthes: The track looked cool, the soil was sweet, and there was a good crowd as well. “Mad” Max Nagl has won two of the three rounds with some great rides (he wasn't very good in Thailand), and red plate holder Clement Desalle looks to be very strong. If you're Ryan Villopoto you're probably not pumped with your 9-8-1-3-4-4 six moto scores, but he's not too far off the lead and Nagl and Desalle have a bit of a history staying healthy. Am I shocked that Villopoto hasn't been better? Well, not shocked, but mildly surprised I suppose. I've been going to MXDNs and GPs for years, I know these guys are great. They're all in shape, the tracks are vastly different from week to week, and I guess Ryan is finding this out. Obviously I don't know how this is going to end but I'll tell you what, this is going to be a fight all the way down to the wire.

2. It's not 100 percent confirmed yet, but Ken Roczen and Justin Barcia will most likely be back in Houston. Will they make an impact?

Stallo: Depends on how you classify impact. For Roczen and Barcia, I would assume an impact is a win, a podium or top five. It’s hard to jump back in after five rounds and expect to be on the podium right away. Or in the case of Barcia, eight rounds. Ryan Dungey and Eli Tomac are rolling right now and Cole Seely is carrying a lot of speed as well. Expectations are probably higher for Roczen—a good night would be a podium—while Barcia is probably just hoping to get some gate time in for Lucas Oil Pro Motocross. Either way, I don’t think we see a podium from either in Houston. By Vegas, that will probably change.

Thomas: I think Roczen could immediately make an impact as he hasn’t been too long away. If he gets a good start and is fully healthy, anything is possible for the 94.

Barcia could be a different story. He hasn't raced in two full months and was off the bike for almost that entire time. Due to the nature of his pelvic injury, he couldn't have been too active during that down time, either. I would think we will see him ease back into the results category and hope to be a serious contender at Hangtown.

Matthes: Yeah, Roczen can win, or for sure be on the podium when he gets back, and if he's not able to be that good by Santa Clara because of a wonky ankle then he should be benched until the outdoors. But I would gather that he's coming back because he's able to win.

Barcia is a more interesting case. At first he wasn't going to miss any time; then it was only a couple of weeks and then it was a couple more, and it's turned into an extended time off. And I hear that his comeback at Houston isn't even locked in. Before he got hurt it wasn't going great for Justin, but it also wasn't a disaster. It was sort of ehhhhh... It will be interesting to see if he can, after a race or two, get onto the box with the field not being as deep as it was when he left. One thing for sure, his teammate Weston Peick is going to fight like hell to stay as the top AutoTrader.com/Toyota/JGR Yamaha rider because that's how these things work.

3. AMSOIL Arenacross is in the midst of a super-close championship fight thanks to its Race to the Championship playoff-style points format. Would you be for or against something like that in Monster Energy Supercross?

Stallo: People love change, so I don’t think there would be any pushback if Feld, or whomever, decided to make this modification. In seriousness, I’m torn on this issue. Let’s not sugarcoat this: the racing has been, how do you say it, boring the past few weeks. The championships have been a foregone conclusion and Dungey, Musquin, and Webb have won fifteen of twenty-six rounds. Not exactly exciting. Would a Race to the Championship format provide more storylines? More intrigue? Yes and yes. But how do you balance it so Dungey isn’t penalized on a great first half of the season? Probably not possible. Imagine this, though: Can you envision the intrigue if Roczen’s return was for a championship run? Or Tomac still had a chance? Or Reed? Or anyone? Just a thought. #ThreeTenLapMains

Thomas: I am a bit torn on this. On one hand, I do like the idea of re-shuffling the deck with just a few races to go. It would add excitement and ensure a relevant end to the series. The other side of that coin, though, is a bit unfair to a rider like Ryan Dungey who has had a dominant 2015 season. He has done everything right this year and earned every point of that 80-point margin. To take that away and force him to restart even with the field doesn't seem right. Either way, racing will go on and everyone will adapt. I think there are ways to make more subtle changes and improve things versus such a drastic shift in championship proceedings.

Matthes: Whether you like the AX format or not, I don't care. I'm just all for trying to change something up in a series that, since 1986, hasn't done jack in terms of formats, points, qualifying—anything. The "chase" style format is great. Awarding points for holeshots, pole positions, or heat race wins is great. Having the riders do a SuperPole contest during the night, having the riders have to qualify twice, having three or four races with two ten-lap mains is music to my ears, having a yellow flag slow down on lap ten to bunch the pack up is okay—in short, I'm for whatever anyone wants to do to try and entertain our fans more than they have been entertained in the last decade of supercross. We're in the entertainment business after all, right? Oh, that's right, we're curing cancer—just ask anyone who has any power in the sport.