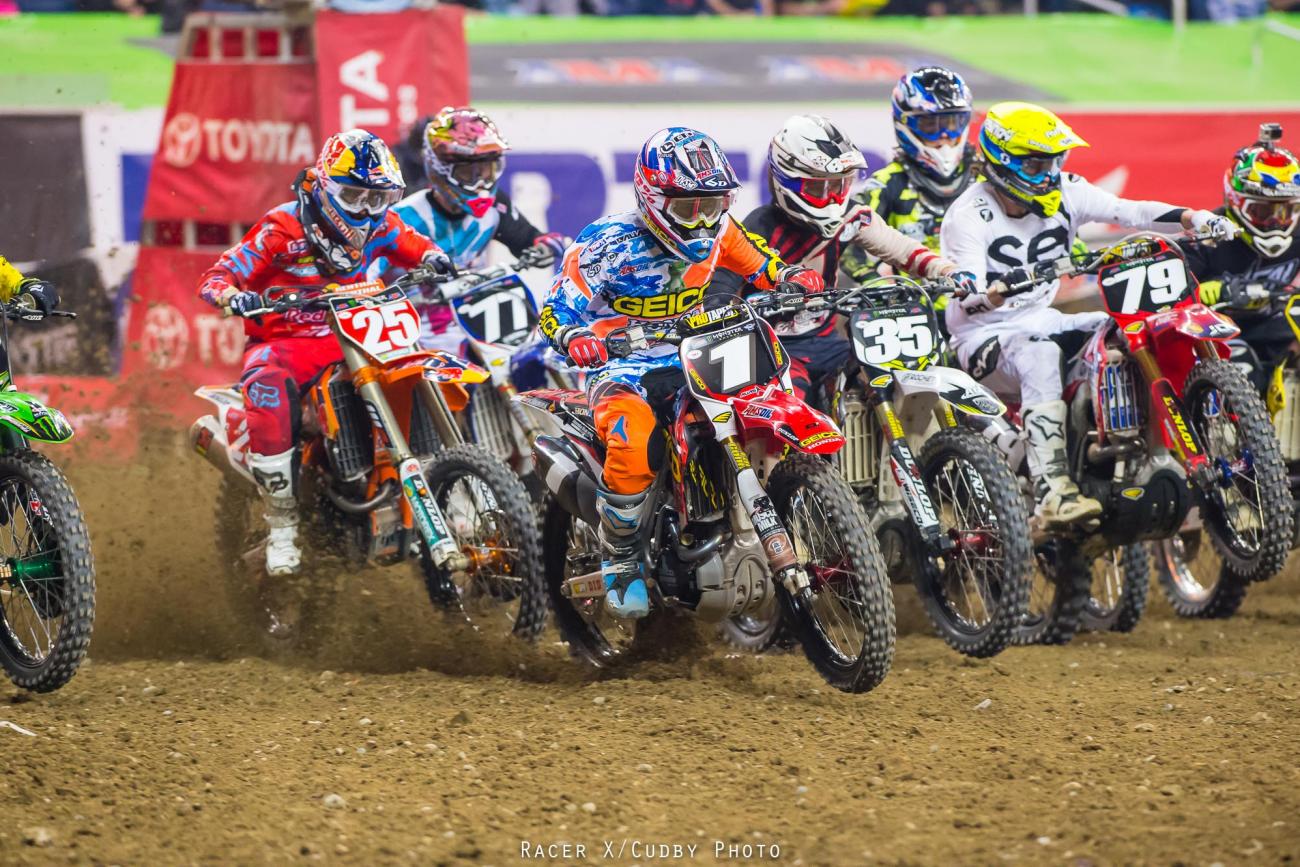 By Chase Stallo and Jordan Roberts

For just the second time this season, and first since Phoenix, GEICO Honda's Eli Tomac is a 450SX race winner. In Detroit Saturday night, Tomac rode a flawless twenty laps to cruise to the win over Ryan Dungey. “It was just a track that was good for me, good for my motorcycle,” he said. “It was just a track I liked.” Tomac also said he liked the sand section and that the technical track fit his style.

Ryan Dungey’s career long three-race win streak has come to an end in the Motor City. Dungey held Tomac at bay for some of the race, but eventually Tomac made a pass stick and ran away with the win. “Of course the goal is to win each race that we can,” stated Dungey. “But sometimes it’s important to remember to ride a safe race and maintain the points lead as we near the end of the series. We still have quite a few rounds remaining and it’s important to finish each on the podium.” Dungey now has a sixty-seven point lead over Trey Canard.

Cole Seely’s rookie season continues to get better and better. For the second consecutive week, and third time this season, Seely found the podium. He said in a statement after the race that the laps are getting easier. “The laps are getting easier for me when I’m running with the front pack. The track was really technical and ended up being pretty slick. Not many of us hit that quad before going into the main event so I knew I had to wing it. It was definitely scary, but made for some good racing.”

Both Trey Canard and Jake Weimer sustained broken arms after a scary crash in the first Semi. Weimer made a small mistake in the second rhythm section and Canard, already committed to the line, landed on top of Weimer. The race was red flagged while medics attended to both riders. Weimer and Canard were able to get up under their own power before being transported off. We’re hearing that it’s a broken upper arm for Weimer and a lower arm for Canard. We will have more information as it becomes available.

Jason Anderson had a big crash in the same section in the main event, but was able to walk away under his own power. There is no official word on his status going forward at this time. Weston Peick also had a big crash, in the first rhythm section, and pulled out of the main event early. He finished twenty-second. We spoke with Weston after the race and he said he was fine and is expecting to race next weekend.

Justin Brayton returned this weekend after missing the previous nine rounds with a back and shoulder injury. After the race he said it kind of felt like Anaheim 1 again and that he was happy to get some time in with the team this weekend. Brayton was expected to return last weekend, but was very sick, which forced his return to this weekend. Brayton said he felt good on the bike, but needs to get his fitness back to 100 percent. He finished tenth.

As for the 250 class, it appeared early on that Marvin Musquin was going to run away with another win—and potentially the series. He was a half second faster than qualifying runner-up Jeremy Martin and was also the only 250 rider to dip into the 52-second range in practice. Justin Bogle was for sure a sleeper pick going into the night. The GEICO Honda rider was two full seconds off of Musquin’s quickest lap and sat in seventh after qualifying had wrapped up.

Not only did Bogle pick up the pace once the night show was under way, but he also pulled the trigger on the quad. Many riders experimented with the quad in practice. Bogle was not one of them, but apparently it didn’t matter. He pulled it lap after lap in the main event without trouble to extend his lead.

Joey Savatgy has to be relieved to step back onto the podium for the first time since the Arlington opener. With Arnaud Tonus sidelined, all focus is on the number 37 bike at the moment. He did a great job holding off the current points leader for as long as he did, especially considering Musquin’s win streak going into the race.

Rj Hampshire was caught up in an unfortunate incident with Martin Davalos that sent both riders over a bowl turn. Davalos lost control after facing one of the rollers in the first rhythm section, and although it initially appeared that he was going to save it, the Husky rider couldn’t seem to find the brakes and substituted them with Hampshire instead.

Anthony Rodriguez landed himself a top five. The kid has speed, but typically has problems steering clear of trouble on the track. Actually, Detroit treated the remainder of the top ten rather well. Colt Nichols scored a career-high sixth place, and Jace Owen has now scored back-to-back top ten finishes, which is also his career highest finish. Mitchell Oldenburg has been hitting the deck quite a bit lately, so an eighth place finish is the kicker to a track that has claimed a few riders tonight.