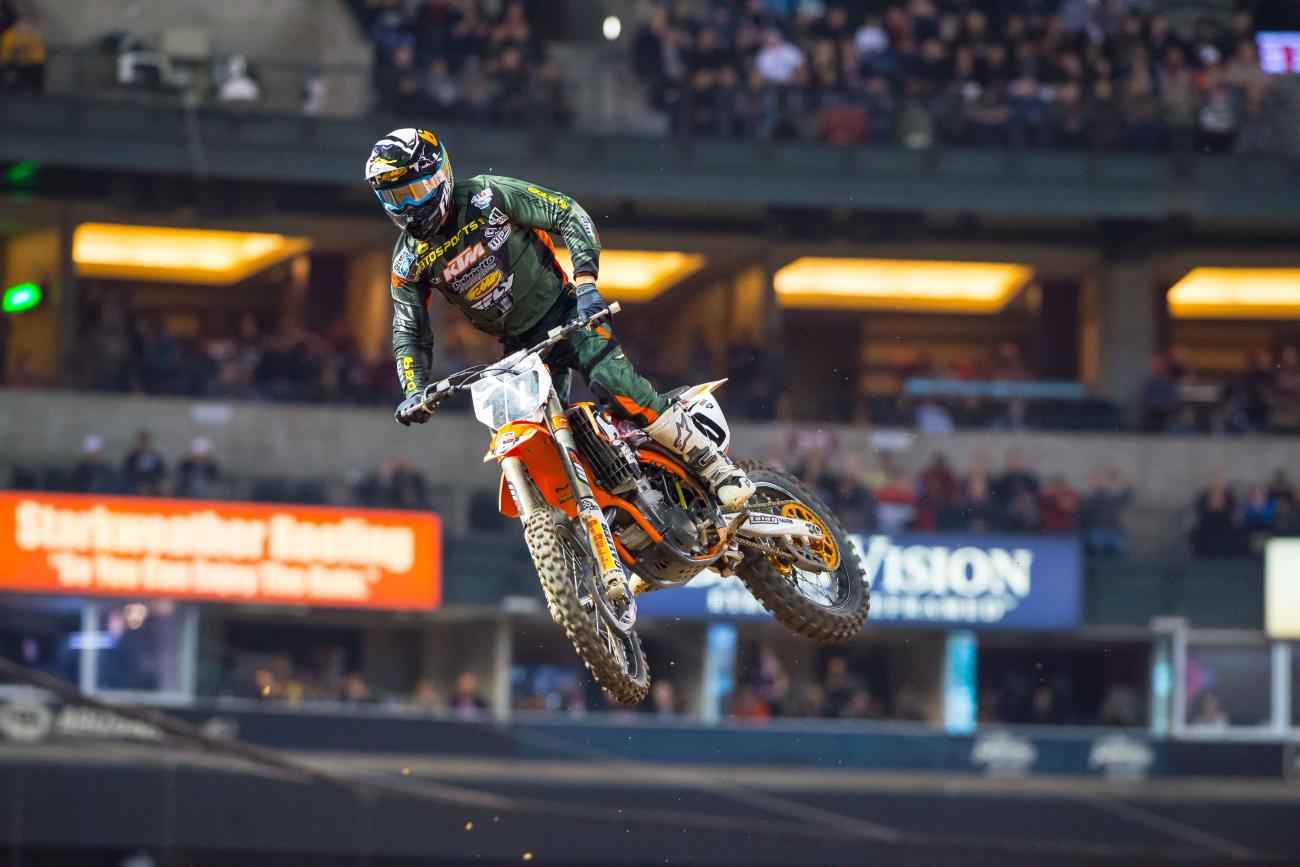 Jimmy Albertson – Shoulders
Comment: Topping this report is Jimmy Albertson, who has been dealing with recurring shoulder dislocations for the past several weeks. He’s made the decision to get them fixed properly and is out for the next few months.

Mike Alessi – Back
Comment: Alessi had a hard crash during the main in Daytona that wrenched his back. He’s been undergoing therapy and hoped to return in Detroit but he’s still unable to race. No word yet on whether he’ll be racing in St. Louis.

Justin Barcia – Hip and Leg
Comment: Barcia crashed at the test track early in the season and sustained a small crack in his pelvic bone. Originally it was thought that he’d only miss a few weeks, but his recovery has taken more time than expected. He’ll miss Detroit.

Justin Brayton – AC Separation and Fractured Vertebrae
Comment: Brayton sustained a grade-three AC separation and three fractures to his T-5, 6, and 7 vertebrae in his back when he crashed in his semi at A2. He’ll make his return to racing in Detroit.

Cade Clason – Knee
Comment: Clason will miss the rest of supercross with a torn meniscus. He plans on returning for Lucas Oil Pro Motocross.

Sean Hackley – Concussion and Severe Hematoma
Comment: Hackley had a big crash in Arlington that sent him to the hospital with a concussion and severe hematoma on his back and legs. He hopes to race again in St. Louis.

Wil Hahn – Arm and Back
Comment: Monster Energy Kawasaki's Wil Hahn is out for the season after a nasty crash during practice at A1. Hahn broke his arm, ribs, and two vertebrae. He underwent a successful surgery on his arm and hopes to return for Lucas Oil Pro Motocross.

Josh Hill - Collarbone, Ribs, and Lung
Comment: CycleTrader.com/Rock River Yamaha's Josh Hill is out after a big crash in Daytona, where he broke his collarbone, injured his ribs, and suffered a collapsed lung. There is currently no timetable on his return.

Ken Roczen – Ankle
Comment: Ken Roczen crashed during practice in Daytona and further aggravated an ankle injury he’d been dealing with since casing a triple in Oakland. Fortunately he doesn’t need surgery and hopes to only miss several weeks. He’s out for Detroit.

Nick Schmidt – Ribs and Illness
Comment: Schmidt cracked some ribs in Daytona and has been battling an illness. He’ll be racing in Detroit.

Ronnie Stewart – Concussion, Ribs, and Shoulder Blade
Comment: Stewart crashed at Atlanta 2 and sustained a concussion and injuries to his rib/shoulder-blade region. He’ll be back in Detroit.

Dean Wilson – Torn ACL/MCL
Comment: Wilson is out for the season after tearing his ACL and MCL at the KTM test track in January.

Scott Champion – Fractured Scaphoid
Comment: Champion is back on the bike and will be back when the West resumes in Houston.

Adam Cianciarulo – Injured Shoulder
Comment: Cianciarulo is out for the supercross season after sustaining a shoulder injury while contesting a preseason race overseas. He is expected to return for Lucas Oil Pro Motocross.

Darryn Durham – Wrist
Comment: Durham bent a screw in his wrist at the season opener. He’s now back on the bike and will race again in Houston.

Vince Friese – Collarbone, Rib, and AC Separation
Comment: Friese had a big crash in Indy during practice and sustained a broken collarbone, broken rib, and grade-three AC separation. He amazingly still raced the main. It will be a game-time decision whether or not he’ll race in Detroit.

Nick Gaines – Wrist
Comment: Gaines crashed in the heat race in Indianapolis and broke two bones in his wrist. He recently said on Instagram that he will miss the remainder of the supercross season but will return for Lucas Oil Pro Motocross.

Justin Hill – Ankle
Comment: Hill hurt his ankle in San Diego. He’s back on the bike and will race when the West Region resumes in Houston.

Brady Kiesel – Wrist
Comment: Kiesel broke his wrist during the LCQ in Daytona and is likely out for the season.

Michael Leib – Leg
Comment: Leib underwent surgery to repair his right tib/fib, his right foot, right big toe, and left pinky toe after a crash in practice in Oakland. There is no timetable on his return.

Matt Lemoine - Finger
Comment: Lemoine missed Indy with a broken finger but is in for Detroit.

Tracy Morgan – Hip, Heel, and Femur
Comment: Morgan is out for the season after a bad crash during practice in Arlington left him with a dislocated right hip, broken left heel, and broken left femur.

Jake Oswald – Collarbone
Comment: Oswald crashed at the season opener in Anaheim and sustained a broken collarbone. He had surgery and hopes to return in Houston.

Chris Plouffe – Ankle, Collarbone, Ribs, and Vertebrae
Comment: In Atlanta, Chris Plouffe sprained his left ankle, broke his left collarbone, broke multiple ribs, chipped his T2 vertebrae, and shattered his T10 vertebrae. After temporarily losing feeling below the waist Plouffe was removed from the track and taken to the hospital. He underwent surgery and had two rods and eight screws inserted in his back. He’s out for the season.

Landen Powell – Ribs
Comment: Powell crashed hard while practicing early in the season. He should be back in Houston.

Dakota Tedder – Hand
Comment: Tedder plans on returning to action for the Lucas Oil Pro Motocross Championship, where he’ll be aboard a 450.

Arnaud Tonus – Illness
Comment: Earlier in the week Tonus posted the following on Instagram: “After more exam, we find out i have a virus in the blood that explain my physical state, i started a traitement this week and hope for the best.” He’ll more than likely miss Detroit.