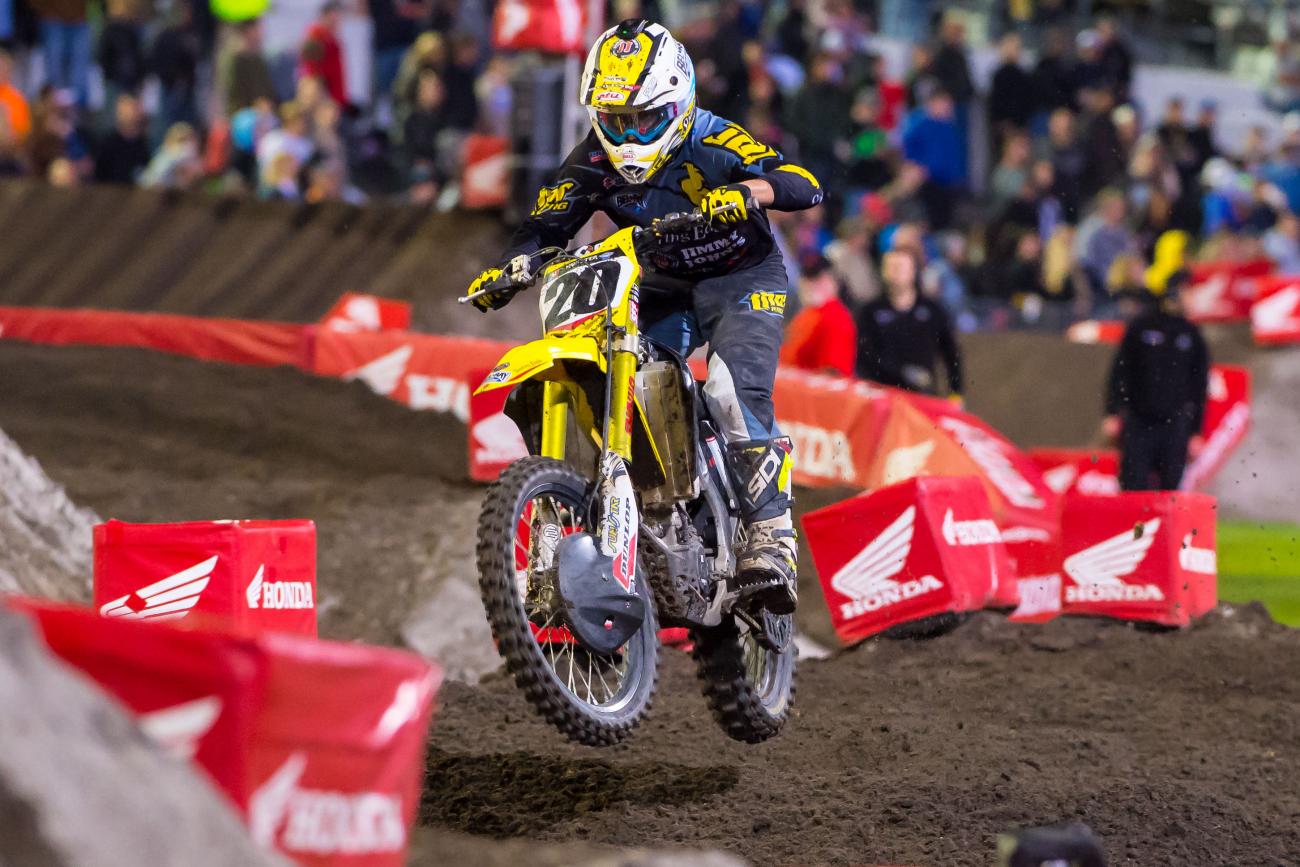 Broc Tickle’s tenth may have gone unnoticed Saturday night—but it shouldn’t. After tangling with Trey Canard on the start, Tickle charged back to tenth—setting the fastest lap of the race in the process! Since returning from a back injury, Tickle has five straight top-tens. “I pretty much started dead last and worked my way all the way up to tenth. On lap two or three, I had the fastest lap of the race so I’m stoked about that,” he said in a team statement. “I haven’t been the fastest guy on the track in a while so that’s a great thing to build off of. On top of that, I felt like my fitness level was really good. I’m pumped with all of the positives but bummed with the negatives. I had a great race but unfortunately, the end result doesn’t really reflect that.”

Tickle salvaged a rough day for the RCH/Soaring Eagle/Jimmy John’s Suzuki team. In un-timed practice, Ken Roczen aggravated an ankle injury he’s been dealing with for the last few weeks. Nothing is official, but Roczen is expected to miss some time. “It was a rough night across the board for RCH,” explained RCH co-owner Ricky Carmichael in a team statement. “Obviously, we’re all concerned about Ken and hope his ankle heals quickly so he can be back on the bike soon. Everyone is behind him 100 percent. He’s going to get it looked at first thing this week, and we’ll make a decision, as a team, about what’s next when we know exactly where he’s at. Broc had a great night. Even though the results say he finished tenth, he put together a great race. If he hadn’t had the issue with Canard, I think he could have finished on the podium. He showed what a gritty racer he is. I think this is the proudest I’ve been to see one of our guys finish tenth.”

Jason Anderson had to work back into the top ten after getting involved in the first-turn pileup. The rookie battled back to seventh to make the top ten for the tenth time in ten rounds this season. "I had two good practices and my heat race was good. Then in the main I got into a little first-turn pile up type deal putting me outside of the top fifteen before working my way back up to seventh,” he said in a team statement. “The track deteriorated gnarly the last few laps and I think my lines were not that good. As my lines stopped working because of the track getting rougher, I kept trying to take them. I just needed to switch things up as the race wore on. I believe my day went better than they have been, I just need to work from here and put all the pieces of the puzzle together."

Team Honda HRC hoped to deliver a win for the Honda brass in attendance at the Daytona Supercross by Honda. For a while, it looked liked they may with Cole Seely, who was challenging Ryan Dungey for second early. Unfortunately for Seely and Honda, he went down while trying to make the pass. He was still fast after getting up, and took fourth. Trey Canard looked great in Daytona—fourth-fastest lap set—but could only work up to sixth after getting together with Tickle on the start. “The night was very disappointing. Everyone put in a really hard effort this week, testing for this race,” said team manager Dan Betley in a statement. “I think we made really good improvements to the bikes for these conditions, but we weren’t able to deliver. All three riders were fast all day long, but once again we struggled on starts. Cole [Seely] got a fairly good start in the main, then came together with [Ryan] Dungey and unfortunately went down. All in all, though, the guys put in a great effort, they rode their hearts out and we just came up a little short.”

Smartop/MotoConcepts Mike Alessi tore the meniscus in his knee at the third race of the year, and he’s been struggling ever since. On Saturday afternoon Mike told us the knee hasn’t come around as quickly as he expected, and his leg still gets weak during the races. He suffered another setback at Daytona with suffered a scary crash in the main event. He wasn’t able to finish the race, but his team owner Mike Genova told us that Mike hadn’t broken any bones, and was just really beat up. We’ll update Mike status for Indianapolis later in the week.

Since he was in last at the time, no one saw it, but Broc Tickle's second lap must have been epic. Epic! Cole Seely is probably already counting the days until Daytona 2016.

JMart had the speed but it took him too long to find it, and then he lost it.

Martin Davalos just hasn’t bounced back from last year’s bad leg injury the way many expected he would. A two-time winner a season ago, Davalos has yet to podium this season. Admittedly, he’s starting to get frustrated. “I just can't find myself. It's frustrating, that's all I can say,” he said in a Rockstar Energy Racing Husqvarna team statement. “My start wasn't too bad but I tightened up then dumped it in a corner. I just don't feel like I have that fight in me. I'm struggling and struggling."

GEICO Honda’s Jordon Smith rebounded from a tough debut at Atlanta 2 to make his first career main Saturday. "It was really cool to make the main event," Smith said in a statement. "That's what you dream of as a kid, and to be able to do that was pretty awesome. I was super pumped to be out there racing with all the guys. It was a really cool thing for me." Smith, who finished twelfth, looked much better than his results—coming back from a crash on the start. “I got a good start in the main event but ended up going down in the first turn. That was a bummer but I made a good charge back."

We heard some buzz about Arma Energy/Motorsport.com Yamaha’s Mitch Oldenburg before 250SX East began, and he’s definitely been fast so far. He’s also had quite a few crashes, including one last week in practice that knocked him out of action. He returned with a vengeance at Daytona, logging the fastest time of any 250 rider in the first free practice, and finally carrying that speed forward to the main event with a solid ninth. The final laps of the race were furious in the top ten, with Davalos, Oldenburg, Anthony Rodriguez, and Jordon Smith fighting for it.

Monster Energy/Pro Circuit Kawasaki’s Joey Savatgy rode to a fourth consecutive top-five in Daytona, but admitted his starts have to improve going forward. "The positive is I was able to move forward the whole race," said Savatgy in a statement. "But I really need to get a start. I'm making it hard on myself and it's frustrating because I know I can run with the leaders and be on the podium. On to next week."

Savatgy’s teammate Arnaud Tonus didn’t get to race Daytona, as the strange illness that sapped his strength in Atlanta reared up again in practice. Tonus told us he basically slept all week to try to recover, but as soon as he rolled out for practice, he felt drained again. He got an IV from the Asterisk medics, and his race day was over. Tonus will get some blood tests this week to try to figure out what’s wrong.

Traders Racing’s Nick Gaines was the surprise of practice. The rookie qualified fifth overall from the B Group and look poised for a top-ten finish. But two crashes in the main left the Georgia native with a twenty-first-place finish. “Was awesome to have a great practice time but struggled again in the night show with just dumb mistakes but we are working hard and learning,” he said on Instagram.

Early-season privateer heroes Matt Lemoine and Vince Friese had days they’d rather forget at Daytona. Lemoine broke his index finger riding earlier in the week and tried to go in practice, but the pain was too much and he wasn’t able to go for the night show. We talked to Lemoine’s dad, who told us Matt’s two swollen ankles and wrists from Arlington weren’t as painful as trying to ride with the broken digit. Friese was riding well throughout the day, but an early crash left him way back. After opening the year with to sixth place finishes, Friese has gone 13-13 since.