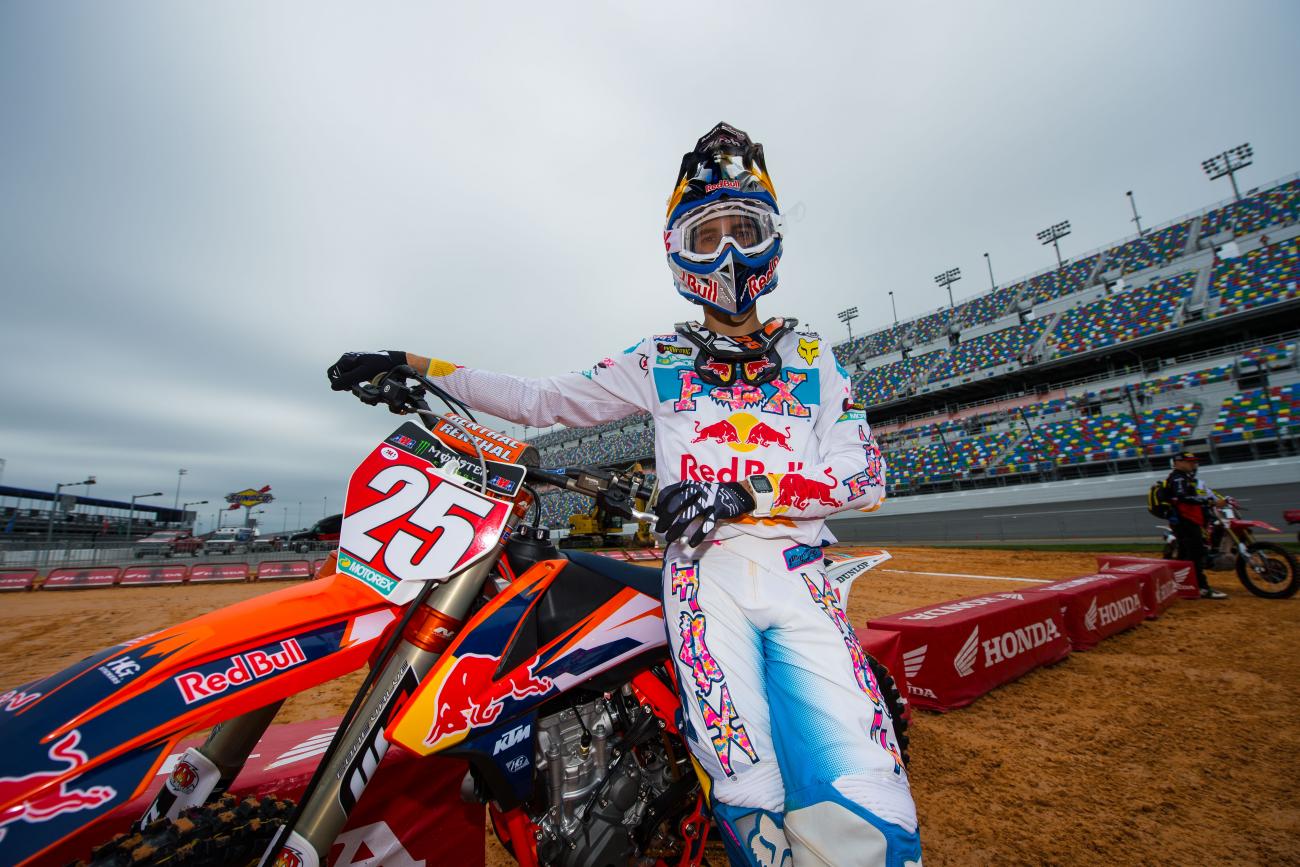 Red Bull KTM’s Marvin Musquin has now won three of the first four 250SX East Region rounds following his second career win at Daytona International Speedway. Musquin now holds a 12-point lead over Jeremy Martin. We caught up with him in the pits following the race.

Racer X: Second Daytona win. That’s the way you want to do it. You won a heat and pulled away in the main event. Last week but it’s a nice way to win. Not a lot of pressure, just kind of ride your own race.
Marvin Musquin: For sure, that’s the best. Getting the holeshot, I really pushed hard to get the holeshot. Not the holeshot, because I don’t even know where the white line was, but in the first turn I was really tight inside and those guys, the GEICO Honda guys, they got a great start but they pushed kind of wide. I turned inside really sharp, but then I pushed really hard for the second turn to get out front. I was really happy. The track was obviously so much different from the heat race because I was first heat and the track was so smooth. I didn’t like that because I knew I was going to the main with a rough track. But it’s okay; we have one lap to check out the track before the main. There were some things in the rhythm that I knew I could do better so I fixed some things and then I was really happy with what I was doing. My condition was good. When I ride like that you know I’m not getting tired because I’m trying to be smooth and calm and really focused on my lines.

It’s kind of a matter for Daytona here, like you’re making jumps and doubles out of the braking bumps, trying to set your front wheel down and stuff.
For sure. The bike, they improved a lot. The bike was actually working even better than two years ago when I won here. It feels great. It’s a tough race and winning here is really important.

Was there a part of the track that you enjoyed the most or gave you the most trouble?
Well, there was that on-off right after the whoops and then dragon back and then that on-off right here, the dirt was so soft and you really had to be precise and land perfectly in the rut. That was one of the toughest sections. The rest was pretty fun. The finish line and those rollers and the big triple there, it was really fast. You had to be really precise. You didn’t want to get sideways because it was so fast. Many riders had some scary moments I think.

Are you in fourth gear there?
I think so. You don’t want to rev too much so you want to use a taller gear so the suspension works better.

The track, they changed it a little bit this year from years past. I heard it was faster this year. Do you think that was the case?
When I watched the track map it looked really, really fast. And actually with the ruts and the whoops and all that it was a little slower, not that fast. Only one section was super fast, it was the finish line and then those rollers, dragon back, and then big triple. Like I said, you had to be really precise and squeeze the bike. When I raced two years ago, one lap was like 1:15, so it was a lot longer. It was way shorter this year. But it was a fun track for sure.

This is getting a little repetitive, but another 1-1 for KTM. You’ve seen where KTM has come from. To see where they are now, what does it mean not for just you but the entire brand to see it all come together?
It means obviously a lot. They came up with a completely new bike this year. They made that factory limited edition and I really want to thank them. Obviously that bike is working really good. I’m always thinking about Pit Beirer and all the people back in Austria. I have so many stories with them, back when I was racing GPs. It makes me happy when I win here in America.

You’re one of the few that have raced there and here. What can Ryan [Villopoto] expect to see in Europe?
First of all, there is no supercross there like we have in the US. It’s only outdoors, the world championship. Europeans can do good in the US and Americans can do good in GPs but we have to adapt and there are some riders that have done better and some others not. It’s still motocross, it’s still racing, but over there it is motocross only. It gets really rough and there are some tracks that are hard-pack and rocky and some texture that we don’t have in the US. That’s why for Ryan Villopoto in Qatar, it was a really weird track.