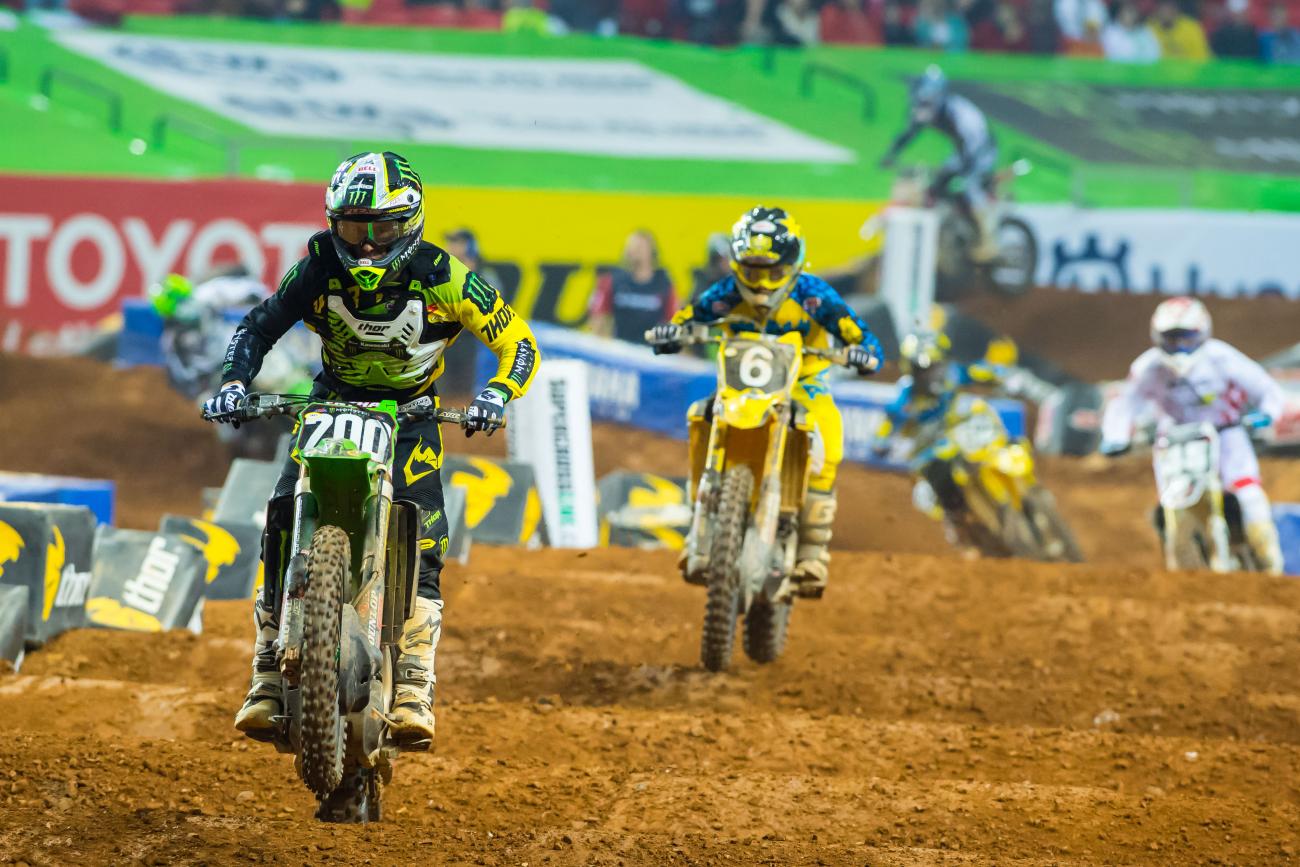 Daytona is the most unique race on the schedule. For starters, it’s the only supercross of the season that is raced inside a motor speedway. The baseball and football stadiums are set aside as we drive into the famous Daytona International Speedway. The speedway itself creates its own atmosphere as the pits are moved into the NASCAR garages, creating a much more intimate feel for the teams. The fans are much closer to the action whether seated in the pit-side bleachers or standing on the actual speedway tarmac. It really is a different atmosphere all the way around compared to the typical supercross.

The track itself is also much different. Built in the tri-oval grass in front of pit lane, it has a sand base with clay hauled in to build jumps and whoops. The sand makes it a much softer and rougher track than anything else seen during the season. Over the years, it has varied in the sand versus clay composition, as more and more clay has been added to create more of a standard supercross track. Still, though, it is Daytona and that isn’t changing. There will be more holes and bumps on Saturday than the rest of the season combined. Looking at the track map for this year, there are a few interesting changes. First, the start is on the complete opposite side from years past. Also for the start, it goes into a switchback, which will be interesting to watch play out. The inside will become the outside and vice versa. There are also a multitude of long straightaways, stretching nearly the length of the infield. This should be good for passing as riders will have time to pull alongside and make their move. There looks to be quite a few options for the rhythm sections and wall jump so we’ll have to wait and see how that evolves.

Ryan Dungey seems to be a mainstay here lately. His 1-2-1 scores in the past few weeks have created a 30-point lead and established him firmly at the top of the peloton. As one of the fittest riders and a former outdoor champion, he should have no trouble with the Daytona course. Excluding 2012’s absence, his last four races at Daytona have resulted in an average finish of 2.5, right in the wheelhouse for his average finish in 2015 of 2.1.

Trey Canard has rattled off a few podiums in a row and is solidly sitting runner-up in the points. He’s had success at Daytona in the past so look for him to be confident rolling into the sunshine state.

Weston Peick’s results may not qualify him for this list but his riding has. His meteoric rise is still in process, and if he regains his fitness sooner than later, he may be a threat to land on the podium this weekend. Leading six laps last weekend is plenty to put him on my radar.

Marvin Musquin rebounded in ATL 2, winning his second race in three tries. It sounds silly to say he rebounded after scoring a second place, but his riding was markedly off at the first ATL go-round. It will be interesting to see if he can match reigning outdoor champ Jeremy Martin on the rough and tumble Daytona circuit.

Broc Tickle has been building all season long after a scary back injury in 2014. He rode one of his best races ever last weekend in Atlanta and should be taken seriously this weekend in Daytona. Putting himself in good track position will be his biggest challenge, but if he can do that look out for the #20.

Jake Weimer has just struggled lately. There’s no other way to put it. Bad starts and crashes have led to bad results. He isn’t riding all that poorly, but it just isn’t going to plan. Jake deserves better.

Davi Millsaps is still battling soreness and a pre-season illness. He has been riding really well in timed qualifying and has the speed to run up front, but hasn’t been able to stay off the ground long enough to put in the results he is capable of. Daytona has been kind to Davi in years past so maybe this is the week he turns it around.

Ken Roczen’s ATL 1 crash has wreaked havoc on his supercross season. Dealing with an ankle injury now, it will be tough to match the intensity of the leaders and last weekend was proof of that. Furthermore, Daytona is not the ideal track to ride through injury. Saturday might be a long day for ze German.

Every flagger is handed a medical flag, a megaphone, and a whistle. If any riders crash, any Tuff Blox are pushed out of place, or the wind gusts above 5 mph, flaggers are given the green light to go bananas.

Torrential rains once again plague Daytona, causing flooding and track destruction. Chad Reed leads nineteen laps, a la 2008, but his bike finally surrenders just before the finish. He kicks and kicks the bike to no avail, then kicks Tuff Blox, kicks an innocent palm tree, kicks John Gallagher, and fortunately he doesn’t read Staging Area or he would kick me.

Weston Peick yawns at the LED wheels that everyone has been running during opening ceremonies and decides to up the ante. He comes to Daytona dressed as Dynamo, from The Running Man. It’s a bold look but generally well received.

Eli Tomac picks up his first win since Phoenix.