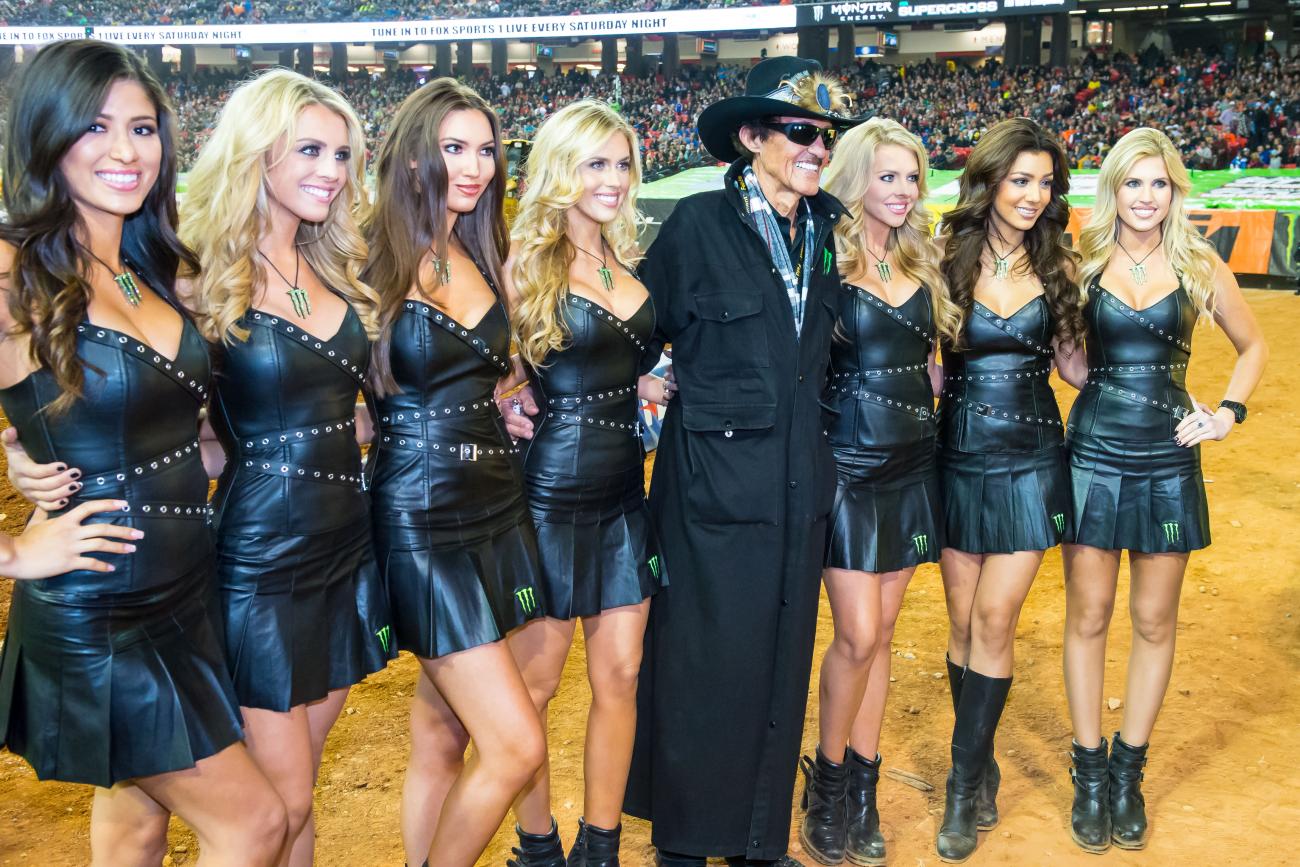 For a good ten years, fans have been pining for two Atlanta supercrosses, and their wishes for a double dip future became the thing of the present with back-to-back races this year. Walking into the pits on Saturday resulted in a feeling of deja vu, because most of the semis hadn't moved an inch the entire week, which is a first for the sport (there were back-to-back Anaheims back in the day, but the trucks were heading back to the team shops in between). In addition, this was a retro race, which served to remind some old-schoolers of the races at the defunct open-air Atlanta Fulton-County Stadium, which always delivered freezing temps, rain, and even snow! The Georgia Dome is a much more modern facility, but there's an even newer stadium under construction right next door due to open in 2017. That building is supposed to offer up the future of the in-stadium fan experience, which basically means more TV screens. Why? Because these days people like watching cool stuff besides just the sport they've paid to see in person.

That moment when you drive to San Diego airport but your flights in Orange County . God I'm a dumb ass.

Ahhh, the 1990s. Home of grunge, the rave scene, the Lewinsky scandal, the advent of the Internet—great times! We heard this throwback race was supposed to center on the 1990s, and plenty of teams, gear companies, and riders jumped on board. Not everyone went 1990s, though. Check out some of the gems from A-T-L 2.

If you think running a supercross team is expensive, you should check out the bill to run an F1 team. Recently, the Marussia Formula One team, which had gone into administration (the term for bankruptcy in Britain), received a lifeline from Ovo Energy founder Stephen Fitzpatrick. The kicker? Autoweek estimates that Fitzpatrick has $60 million in the Manor Marussia team. Furthermore, BBC Sport is saying that he used his personal money (!!!!!!) to rescue the team. Jalopnik has more details.

What kind of lunatic funds a down-on-their-luck F1 team? The founder and chief executive of an energy firm. Stephen Fitzpatrick heads up Ovo Energy, and as a lifelong F1 fan, he has been looking for a way to get involved in the sport. He was originally looking at Formula E, but saw a greater opportunity when Marussia went into administration.

It's a good thing he's a fan of the sport. Financially, funding a race team is akin to putting your money though a cheese grater, or perhaps one of those fancy-schmancy Salad Shooters if you've got one of the more well-funded teams. It's a labor of love in every conceivable way.

Tom Pages Is One Bad Dude

Over the last few years, major sports leagues around the globe have tinkered (or considered tinkering) with making their formats more compact. From tennis to soccer to baseball to basketball to golf—all have talked about or considered changes to keep up in a world where scores, highlights, GIFs, etc. are a touch away. Leagues are literally looking at making every second count. From the NY Times:

Consider the package of initiatives announced last week by Major League Baseball that is designed to pick up the pace of play by trying, among other line items, to keep dallying hitters in the batter’s box (a pitch clock could be next).

Consider the N.B.A.’s preseason experiment in October with 11-minute quarters and a 44-minute game instead of its usual 12-minute quarters and a 48-minute game. Or golf’s ongoing fight against slow play. Or look at FIFA’s adoption of vanishing spray at last year’s World Cup; one of its biggest selling points was how quickly it did away with much of the interminable stalling and haggling before free kicks.

“The longer the ball is in play, the more entertainment value for the fans,” said Jeff Agoos, the former United States national team player who is now vice president for competition for Major League Soccer. “So we’ve done some analysis on not only how often the ball is in play but how we can improve and increase the amount of time the ball is in play.”

This video is absolutely coco bananas. According to The Big Lead, a YouTube user named Nomadic Adrenaline, uploaded a video on March 1 that claims he suffered a seizure during a 12,000 foot sky dive jump. WHAT??? Thankfully the jump master saw something had gone wrong and dove to save him. The crazy video is below. And go here for more.

The opening round of the FIM World Motocross Championships took place in Qatar last weekend, and the guys from HookIt tracked the social interactions from Thursday through Monday. Tony Cairoli just beat out Ryan Villopoto with Gautier Paulin a distant third. Check out the top ten below.

If you listen to sports radio, it’s likely you are listening to ESPN Audio. According to Sports Illustrated, “60 percent of the people in the U.S. who listen to sports talk radio listen to ESPN Audio.” That’s a pretty telling stat. Richard Deitsch recently did an in-depth interview with Traug Keller, one of the top people at ESPN Audio, about the future of ESPN Radio and more much. From SI:

Are you talking about doing local content or being more provocative?

Being more provocative. We can’t do that. I will tell you that a litmus test of mine for Mike and Mike and how it fits in with the brand is I want Mike and Mike to be able to be on with the moms driving the kids in the backseat to school. We get feedback on that, and it matters. It matters to our brand. Do we want to have the sports show of record where commissioners want to come to get their point of view across? Yes. All that stuff matters. It actually allows us to deliver an audience that advertisers feel very comfortable in and more and more today advertisers are trying to stay away from controversial talk.

We feel good about the brand we are putting forth. Now ratings are absolutely important. We added Cris Carter in the fall [to Mike and Mike] and it absolutely helped move the ratings. We’ve brought in [His and Hers co-hosts] Jemele Hill and Michael Smith from time to time and that has helped. We are doing things to constantly tweak the ratings. I’m not ceding it but I am telling you there is a larger picture.

Hover-surfing? Whatever it is, it’s rad

Professional surfer Laird Hamilton is doing some crazy stuff in New Zealand. This video is a must see. For more on what this is, visit For The Win.

Steve finally decided to email me his podcast this week—late, of course. This classic podcast is with Micky Dymond.

Two-time 125MX champion Micky Dymond sat down with me a few years ago to talk about his career and being left off two MXDN teams when he probably should've been a guy to go. Dymond also talks about hanging out with Motley Crue, riding for factory Husqvarna and more in this deep and soulful podcast.