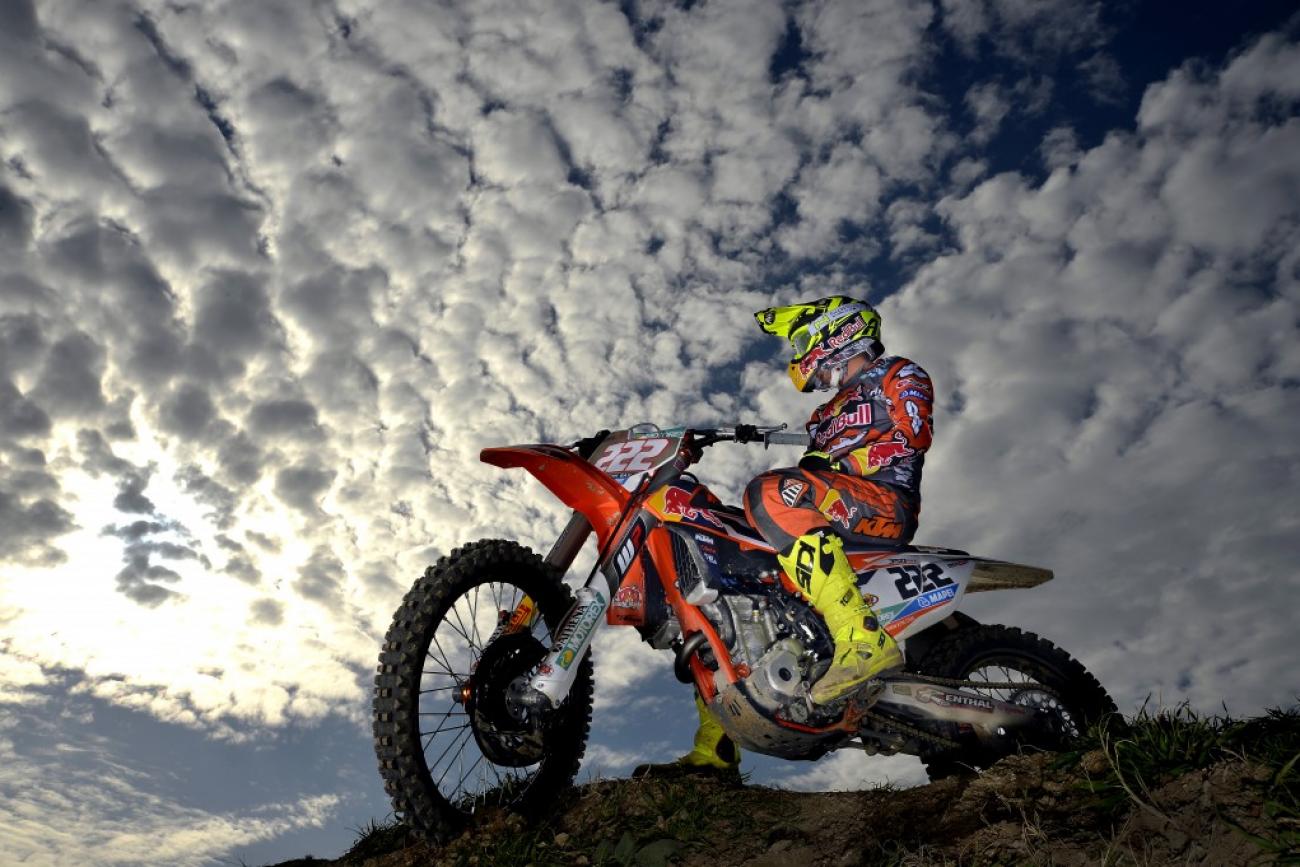 Here at Racer X, we've always respected the accomplishments and athletes of the Grand Prix circuit, which is why we pay highly-respected European scribe Adam Wheeler to produce post-race reports from every race. But something was different during this pre-season. There seems to be more interest, more buzz, more.....okay let's get it out of the way: RYAN VILLOPOTO IS RACING THE GPs!!!

Because of that, we expect there to be more interest than ever in the FIM World Motocross Championship Grand Prix circuit. So we've put together this spotter's guide for the 2015 season, which starts this weekend in Qatar (the races take place on Saturday night over there, which is actually 11 a.m. here on Eastern Standard Time).

Want to be a more informed Grand Prix bench racer? Read on.

Antonio Cairoli | #222 | Italy | 2014: 1st
The Italian has been the man to beat for the better part of the last decade in MXGP (formerly called MX1). Cairoli won fifteen motos a season ago en route to an eighth world championship. Last year, he finished 2-3 in Qatar. Others have matched his speed, but his real key is managing a season through consistency and avoiding major injury.

Ken de Dycker | #9 | Belgium | 2014: 20th
A wrist injury limited Big Ken to just ten rounds a year ago—he never appeared quite right. He did find the podium late in the year in Belgium, before sitting out the final two rounds. Health will determine how far de Dycker goes this year.

Max Nagl | #12 | Germany | 2014: 6th
Probably the most overlooked rider going into the season. The German won five motos a year ago, including the overall in Brazil, while with HRC Honda. He was also a key factor in Germany’s 2012 Motocross of Nations win.

Todd Waters | #47 | Australia | 2014: 23rd
Waters missed all but five rounds a season ago after breaking his left tibia and fibula and his right collarbone, and sustaining a small fracture in his hip, in a practice crash. This is his second season with the team.

Ryan Villopoto | #2 | United States | 2014: Raced in US
You know the drill here: this is probably RV’s last season of professional racing; he’s trying to become the first American to win a world title since Bobby Moore in 1994; and… he’s trying to dethrone eight-time world champion Antonio Cairoli.

Tyla Rattray |  #28 | South Africa | 2014: 17th
Rattray, who is close friends with RV, was brought on to help him adjust to life in Europe. In his first season back in the GPs last year (he won the MX2 Championship back in 2008), Rattray dealt with a myriad of injuries and only contested seven rounds.

Gautier Paulin | #21 | France | 2014: 8th
He won the opening round in Qatar a year ago, and ended the year in dominant fashion at the Motocross of Nations. In between, Paulin missed seven rounds with injury while racing with Monster Energy Kawasaki (RV’s current team). In the ten rounds he raced, Paulin had five moto wins and four moto podiums. Honda has revamped their GP efforts, and the legendary Jean-Michel Bayle will be by Paulin’s side all season.

Evgeny Bobryshev | #777 | Russia | 2014: 14th
When healthy, Russian Bob can win races. But injuries cost him eight rounds last year, including the final seven. His best moto finish last year was a fifth. Are you noting how often you hear about riders getting hurt? That’s what makes Cairoli’s consistency so remarkable, and key.

Jeremy van Horebeek | #22 | Belgium | 2014: 2nd
Van Horebeek only won one moto last year, but was on the podium a remarkable twenty-one times. This is another title contender to watch for this weekend.

Kevin Strijbos | #22  | Belgium | 2014: 3rd
An ever-steady presence in the championship, Strijbos has been there and done that. He might not be the fastest rider every weekend, but he’s solid.

Glenn Coldenhoff | #259 | Netherlands | 2014: 13th in MX2
Another product of the MX2 age rule, this will be the first year in MXGP for Coldenhoff. He broke two toes in a warm-up race earlier this year, but should be good to go this weekend.

Jake Nicholls | #45 | Great Britain | 2014:22nd
Nicholls broke his arm last weekend in a warm-up race and will miss the opener. There is no timetable on his return.

Jeffrey Herlings | #84 | Netherlands | 2014: 2nd
Herlings won twenty-two motos a year ago, but didn’t win the championship. The two-time MX2 world champion broke his femur on an 85cc at the Everts and Friends Charity race in July. He returned at the final round in Mexico in September to try and salvage the championship, but fell short. After a lengthy off-season recovery process, he might be behind at the opener. He said in a recent video: “If it’s going to be a win, it’s going to be more than beautiful. If it’s going to be third, it’s great. If it’s going to be fifth, I’m happy. Whatever the result will be, I’m going to be a happy guy because I undergo surgery just a little bit over two months ago and I’m already back on the bike.”

Pauls Jonass | #41 | Latvia | 2014: 24th
Last year KTM signed the 2013 125cc Junior World Motocross Champion to a five-year deal. This will be his first full-time season in MX2. He spilt time last year between the European Motocross Championship (EMX250) and MX2, racing seven rounds in MX2 with a season high of fifth.

Jordi Tixier | #1 | France | 2014: 1st
The defending MX2 world champion moves over from Red Bull KTM to Monster Energy CLS Kawasaki. Last year, Tixier had twelve moto podiums to go with three moto wins. Racer X’s Eric Johnson recently asked Jordi if he could beat Herlings this year. “I hope so,” he said. “That’s my goal, you know? The last few years he was faster than us, but he also got injured two times—like last year he was injured and the year before. Last year was my time to be world champion and I did it.

Dylan Ferrandis | #4 | France | 2014: 4th
Ferrandis won the opening moto in Qatar last year—and then didn’t win another one. He did, however, have twelve moto podiums, including seven runner-ups. Life is tough when you’re pitted against Herlings.

Thomas Covington | #64 | United States | 2014: 17th
Covington struggled in his first season abroad. After a third in moto 1 in Qatar, he’s best finish was a eleventh (twice). He hopes year two will be better.

Max Anstie | #99 | Great Britain | 2014: 12th
Anstie, who spent a lot of his career racing in America, is back for another season with Dixon Racing. The team is switching from Yamaha to Kawasaki in 2015. Anstie won his first career MX2 overall last year in Lommel.

Jeremy Seewer | #91 | Switzerland | 2014: 10th
Another fast Swiss rider that has followed in Arnaud Tonus’ footsteps. He finished tenth in his rookie season a year ago, with his best finish of fifth (twice). Could be one to watch.

Tim Gajser | #243 | Slovenia | 2014: 5th
Honda signed Gajser to a two-year extension last year. Gajser is considered one of the brightest young prospects in MX2. He was on the podium eight times last year, and won his first career motos in Brazil and Mexico.

Jorge Zaragoza | #101 | Spain | 2014: DNC
This is the Spaniard’s first season in MX2, after contesting the European Motocross Championship (EMX250) the past two years.

If you’re not familiar with the circuit in Qatar, you can check out full motos (MXGP Race 1 and MX2 Race 1 and 2) from the opener in 2014.

On Track Off Road’s Adam Wheeler is plugged in to the GP scene (like we said at the top, he's our GP man.) He’s been covering the series for some time now and calls it like he sees it. He recently sat down with Steve Matthes to preview the 2015 series. Check it out here.