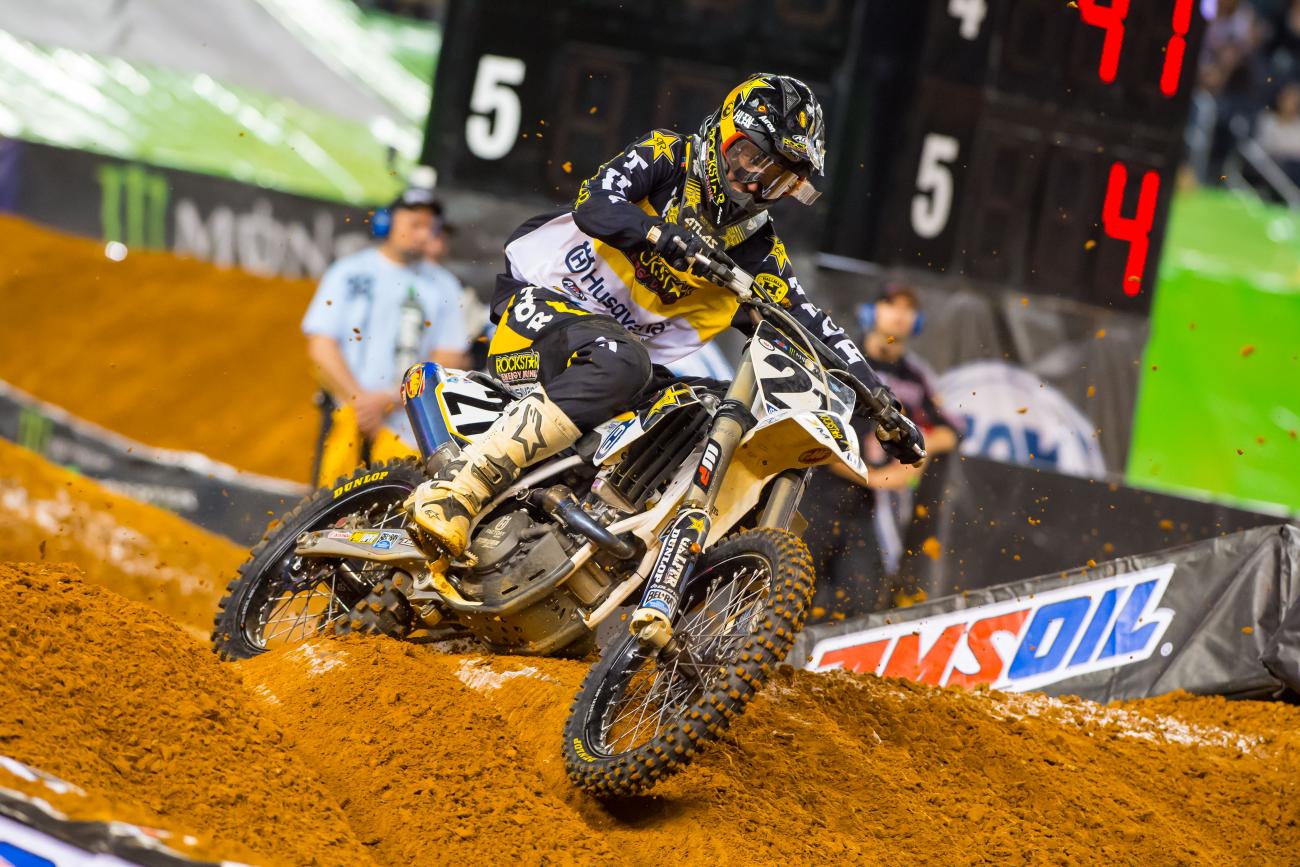 Atlanta was one of my favorite places to race. Back in the late 1990s and early 2000s, the dirt was always super-sticky and rutty. In fact, I can remember watching Jeremy McGrath roll all three jumps of the triple, lap after lap, on Friday practice in 1996. It was that rutty. As dirt preparation has improved, that factor seems to be a thing of the past. In fact, I can remember years such as 2005, where it was actually dusty and hard-packed. Whether it was the weather or an incredible amount of soil drying substance, like hydrated lime, the dirt was totally different than most years. The next year, however, it was back to the sticky Atlanta I know and love. What this week’s dirt looks like is anyone’s guess, but more times than not it will be some of the tackiest dirt of the series.

Looking at the track map, there are a few interesting obstacles. The start is fairly long, which I like. It wraps all the way back around in a long, sweeping 180-degree turn. It should allow for riders from the outside to push really deep into the turn while the inside riders can stay tight. Both options should have a chance at a good start, which is always the goal. Moving to the rest of the track, it looks to have opportunities for varying rhythms. Depending on the ruts, riders could triple at various times and attempt to find a better option. As riders always want to stay lower and thus faster, avoiding the tallest jumps is the optimal route. Being able to triple over or land on the backside of the five-foot variation of these obstacles is always best. The whoops are also interesting as there is an option lane. I am a little concerned as to whether or not they add Tuff Blocks to keep riders from switching lanes, but in theory, it will create passing. The whoops here often turn into a few well-timed jumps as a rut often forms with the softer soil.

If you’re on a factory Red Bull KTM, you’re probably on this list. Both Ryan Dungey and Marvin Musquin had impressive wins last weekend in Dallas. They both led from start to finish and both won their heat races. Andrew Short also put in an impressive fifth-place, matching his best finish of the season. It was a good weekend to be in orange, apparently.

Justin Bogle also had a strong weekend in defense of his #1 plate. He won his heat race easily and was clearly better than everyone not named Marvin.

Blake Baggett turned in his best ride of his young 450 career with a fourth-place in Dallas. He kept Canard in sight for the entire race and turned many heads along the way.

After a month of crashes and horrible weekends, Josh Grant has bounced back with two solid weekends in a row. An eighth-place in Dallas was more of what he and his team expects from the #33.

Eli Tomac has missed the podium two weeks in a row and really for no other reason than crashes. He is getting great starts in the heat races, but the main event starts haven’t been as consistent. He’s also in a tit-for-tat with Chad Reed that has landed someone on the ground two weeks in a row. None of those things are helping his case to get back to the front.

Jason Anderson is sitting in fifth place according to the points sheet, but he hasn’t had the sort of rides we saw early in the season. I am not sure what’s missing, but I haven’t seen that same fire or ability to move forward.

Jake Weimer’s last three finishes are 15-15-14. Jake is better than that, period. I am sure no one is more frustrated with that than him.

Marvin Musquin wins again in Atlanta and looks poised to run away with this title.

Jimmy Albertson is once again run over by multiple motorcycles in Atlanta. Jason Lawrence, who has been in an Instagram feud with Albertson, cheers wildly from his couch somewhere. I won’t make any more jokes concerning this because I don’t want to join this ruthless feud. Sorry for the lead-in and I wish the best to both of you in all future endeavors.

Eli Tomac wins the main event after getting a decent start in the main event (disregard the Reed takeout contradiction. I think Eli will win and I’m covering my bases here).

Kyle Chisholm clobbers Nick Wey and a brawl ensues. #TeamChiz and the Moto Mafia Crew are entangled in a massive knife fight, much like in West Side Story (google it, kids). Back in the pits, there is a war of make-up and pickles that will be talked about for years to come.

Erv Braun still believes that Arnaud Tonus is still on the Teddy Parks’ owned TPJ team. He rants and raves about the Swiss rider’s speed for a privateer; meanwhile, Mitch Payton plans to burn the announcing booth to the ground.

Weston Peick races with a partially healed foot and torn MCL in his knee. He called his legs “quitters” and threatened to amputate both of them if they didn’t “get their sh—together.” Bold strategy, but I doubt Weston even believes in legs.