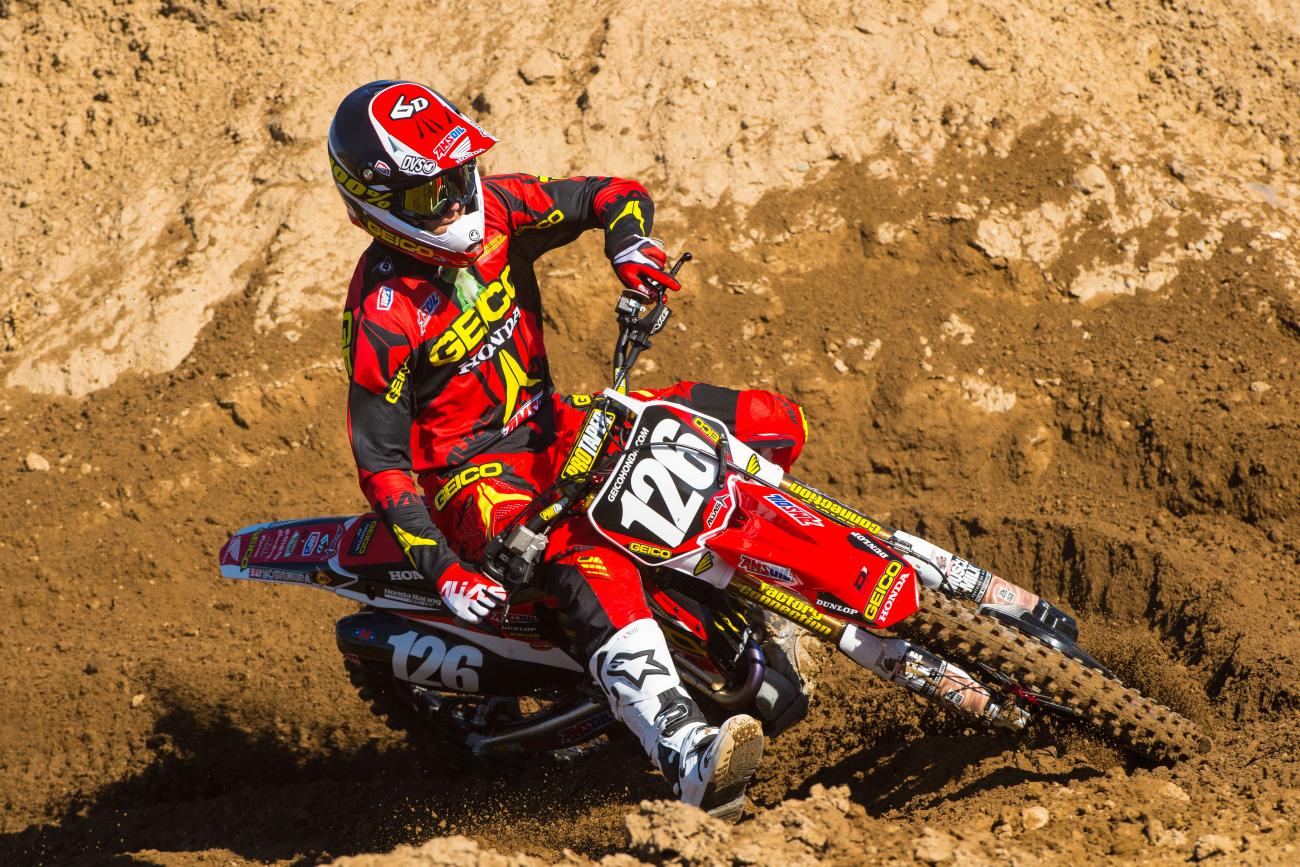 Mike Alessi – Knee
Comment: Alessi tweaked his knee in the main event at A2. He had a minor procedure on his knee and is back racing. He’ll line up in Arlington.

Justin Barcia – Hip and Leg
Comment: The AutoTrader.com/Toyota/JGR Yamaha man crashed at the test track before San Diego and sustained a small crack in his pelvic bone. The injury doesn’t require surgery of a doctor’s clearance, so Barcia’s return will come down to when he’s able to ride without major pain. He’s out for Arlington and will probably miss at least two weeks.

Justin Brayton – AC Separation and Fractured Vertebrae
Comment: Brayton sustained a grade-three AC separation and three fractures to his T-5, 6, and 7 vertebrae in his back when he crashed in his semi at A2. Currently there is no timetable on his return, although Brayton hopes to be back at some point this season.

Cade Clason – Shoulder and Knee
Comment: Clason dislocated his shoulder and jammed his knee in the crash in Oakland. When he went to the doctor, they found that he had a previously torn labrum. He’s still pretty sore, but he’s been riding and plans on giving it a go in Dallas.

Wil Hahn - Arm and Back
Comment: Monster Energy Kawasaki's Wil Hahn will miss the duration of Monster Energy Supercross following a crash at Anaheim 1. Hahn sustained a number of broken bones, including his arm, ribs, and two vertebrae. He underwent a successful surgery on his arm and even hopped on the team semi to hitch a ride to Dallas! Hahn hopes to return for Lucas Oil Pro Motocross.

Weston Peick – Foot
Comment: Peick suffered a broken bone in his foot when he cased a triple in in Phoenix. Peick had a screw installed to stabilize the broken bone and attempted to ride practice at A2 but re-injured his foot. After another surgery and a few weeks off, he’s back on the bike and will race in Arlington.

Dean Wilson – Torn ACL/MCL
Comment: Wilson underwent successful surgery after tearing his ACL and MCL at the KTM test track in January. “My doctor said the surgery went well and I’m looking at a regular rehabilitation process for my knee,” said Wilson in a team statement. There is currently no timetable on his return.

Darryn Durham - Wrist
Comment: Durham crashed at A1 and bent a screw in his wrist. He underwent surgery and plans on being back in action at Houston.

Justin Hill – Ankle
Comment: Hill got run over in the main in San Diego and injured his ankle. No word yet on when he’ll be back on the bike.

Michael Leib - Leg
Comment: Leib underwent surgery to repair his right tib/fib, his right foot, right big toe, and left pinky toe after a crash in practice in Oakland. “Out of surgery from early this morning. Looks like the operation went well. Time to heal up now,” said Leib. He is expected to miss the remainder of Monster Energy Supercross.

Landen Powell – Ribs
Comment: Powell missed San Diego after crashing hard while practicing during the week prior to Anaheim 3. He issued the following statement on Instagram: “After getting a second opinion and follow up X-rays yesterday, I found out that I have 4 broken ribs on my left abdominal. Unfortunately this means I will be off the bike for a while and will not be able to make my return until Houston.”

Jordon Smith – Hand
Comment: Smith sustained a broken hand while practicing that required a plate and six screws. He was going to try to race in Arlington but ultimately made the decision to sit out. The team thinks he’ll return at one of the Atlanta rounds, but it’s unknown at this point if that will be next weekend, or Atlanta 2 in two weeks.

Jesse Wentland – Shoulder
Comment: Wentland is expected to miss the entire 250SX East Region after recently having “plate, twelve screws, and a bone graph.” He is expected to be off the bike a month or two and will return for the Nationals.