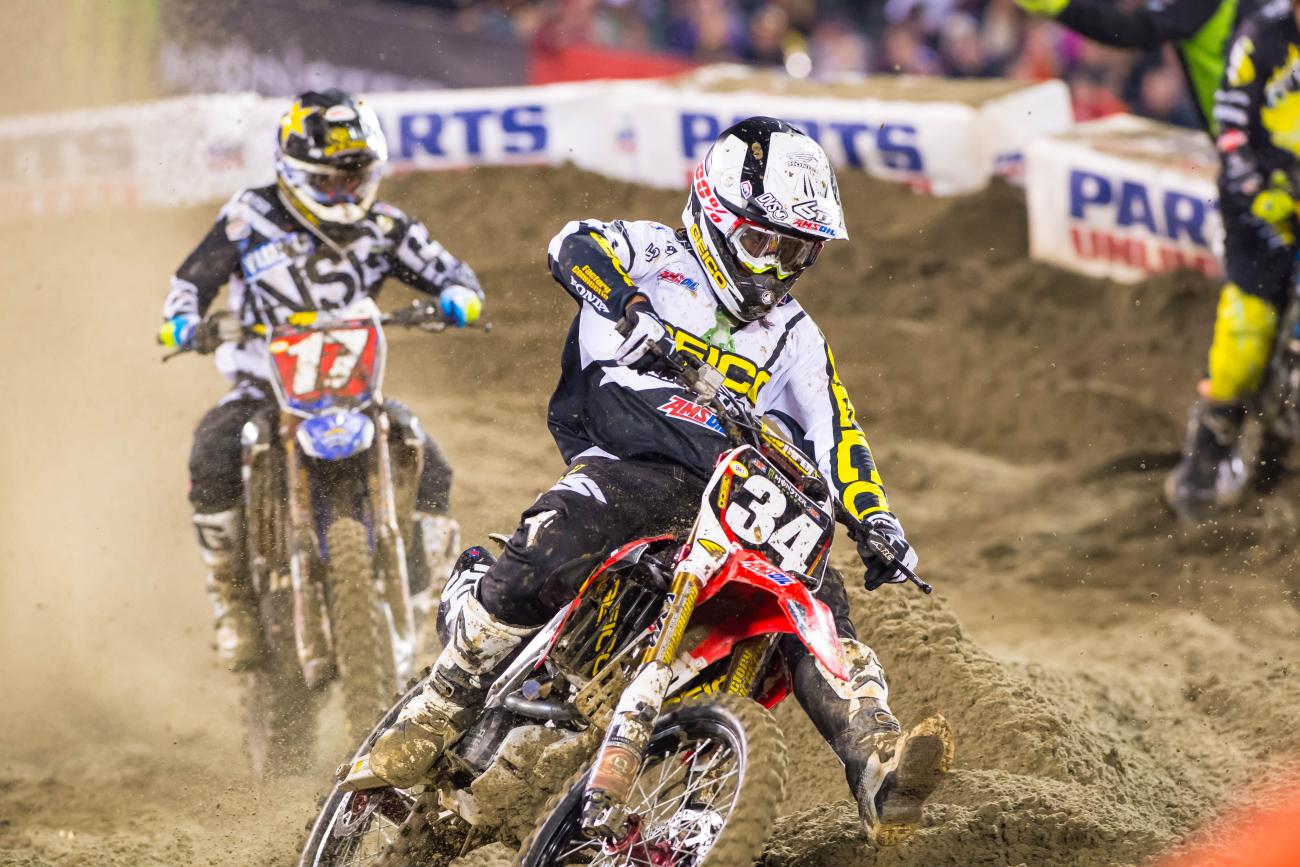 By now, the Anaheim dirt has been inside the stadium for well over a month. It’s been ridden on by dirt bikes and beaten down by Grave Digger for weeks on end. As the Anaheim trilogy wears on, the dirt becomes less and less ideal for supercross racing. Traction is just a distant memory when the ocean layer rolls in once the sun goes down. It’s noticeably and consistently worse at this last round than the first rendezvous. No one is a big fan of this soil deterioration, but it’s something that everyone must deal with.

Trey Canard finally brought the form we saw from him at the end of the outdoor season and the Monster Energy Cup. He was on fire all day, setting the fastest time in both timed qualifying sessions. In the main event, he worked his way to the front without too much of an issue and controlled the race. It was truly a breakout day for Canard and what many expected coming into 2015.

Chad Reed also finally made it into this group after a rough year thus far. He looked far better in qualifying than at any previous round and carried that into the night’s racing. Had he not jumped off the track, he would have finished at least with a runner-up position. Hopefully his resurgence is the norm and not an exception.

Cooper Webb is certainly running hot at the moment, both on and off the track. After his tangle with Tyler Bowers, he was on a different level as he blazed through the pack. Malcolm Stewart won his first supercross; congrats are in order for that. Another few turns and Webb may have stolen that away, but Mookie did what he had to do, and rode a very solid race.

Ken Roczen leads this off as his misstep in the opening laps nearly ended his season. He was in a great position to extend his points lead but instead handed the red plate to Ryan Dungey. He will bounce back, but that was a costly error, no doubt.

Josh Hill has to be wondering what on earth is going on. He has missed three straight main events and I am not quite sure why. I made a point to watch him in practice at Oakland and he was actually riding well. Weird deal but I think he will figure it out soon.

Jessy Nelson had a big issue on the first lap, putting him in dead last position. He fought back valiantly to tenth, but with Cooper Webb on an absolute tear, he can’t afford mistakes like that if he wants any chance at regaining that red plate.

- Ryan Dungey gets his first win of the season at Anaheim 3. His prowess on the icy track will shine through.

- In the wake of Tyler Bowers recommending that Cooper Webb should “run like a scared dog,” Yamalube/Star Racing Yamaha picked up Purina Pet Chow as a huge outside sponsor. Team owner Bobby Regan had nothing but great things to say: “Purina will have all of our boys riding like scared dogs out there. Our tails aren’t between our legs, but our bite is just as big as our bark. Bowers should have just let sleeping dogs lie. We don’t like dirty riding, but if you lay with dogs, you’re going to get fleas. Hopefully everyone will keep to themselves and we can call off the dogs from here on out.” Thanks, Bobby, we got it.

- Chris Alldredge finishes the main event without scaring the entire stadium half to death.

- Andrew Short smiles all day regardless of how he feels, even while talking and riding.

- Ken Roczen, moving away from Aldon Baker’s program, surpasses Joey Chestnut’s record for most burritos eaten in one sitting. Jimmy John’s announces a plan to introduce Mexican offerings in their spring menu.

- Tyler Bowers signs on with the X-Men cast as Wolverine’s sidekick, Kentucky Man-Bear. KM-B will debut in the next segment of the series, X-Men: Tangled Webb. His superpower is rumored to be the Atomic Elbow but unconfirmed as of yet.