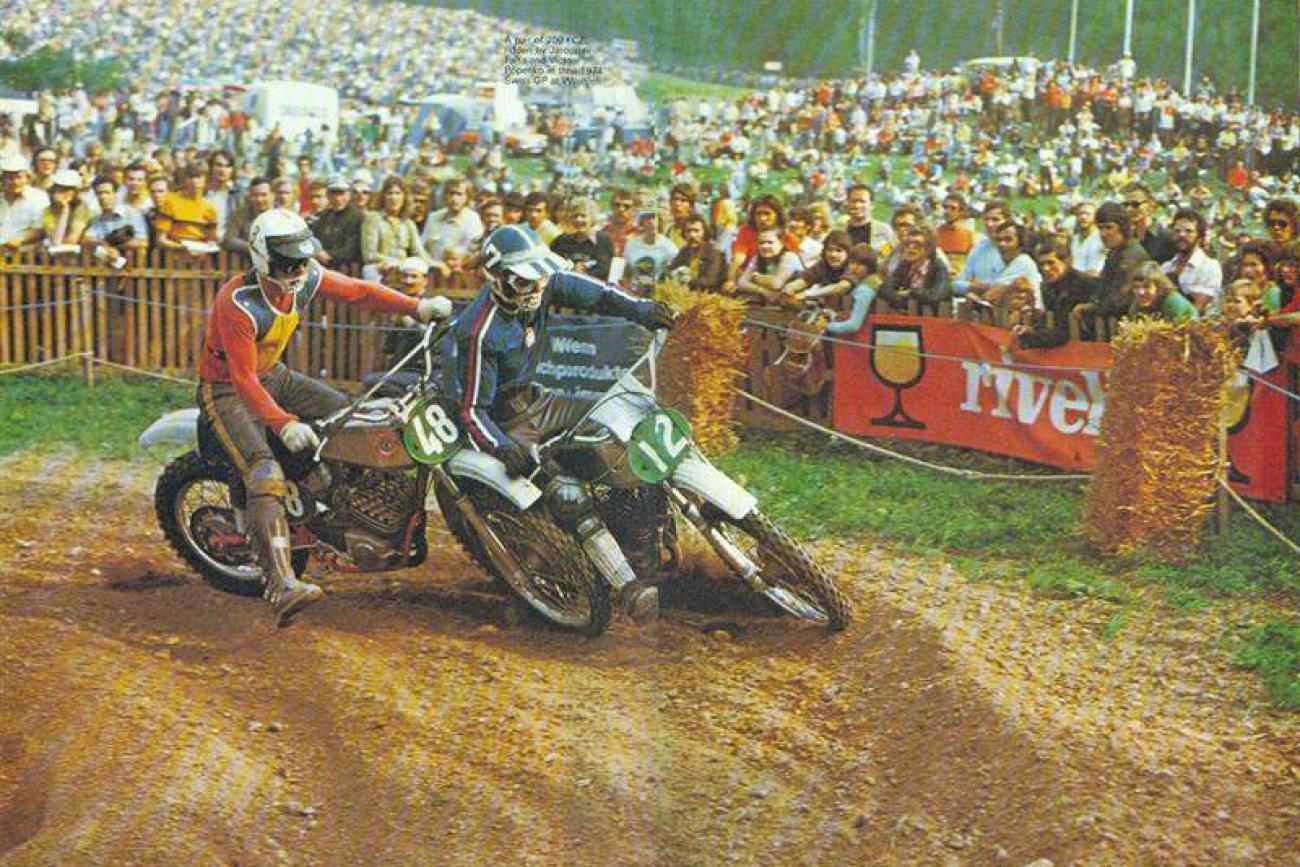 You know what happened last Saturday night. In light of that, here’s a reminder of some previous controversies and decisions (and non-decisions) that dot the history of motocross and supercross. It’s not a complete history, just a sampling of races (and rules) gone by…

1974: In one of the most controversial days in motocross history, Czech CZ rider Jaroslav Falta survives an afternoon of being a moving target for Russian riders who were trying to help their countryman Gennady Moisseev hold on to the points lead at the final round of the 250cc World Championship in Switzerland. Falta prevails, but then later is docked one minute for having jumped the starting gate in the second moto (he and his team argued that he simply got a great jump on the forward-falling gate). It’s just enough to give Moisseev the championship—his first as well as KTM’s—despite the tactics of his teammates. Moisseev would go on to win two more world titles, while Falta would never wear the crown.

1974: In an ill-advised attempt to make sure the AMA National Motocross Champion is actually an American, the AMA implements a citizenship requirement that states that points in the series can only be earned by US citizens, which sucked for Pierre Karsmakers, the Dutch transplant who was the reigning 500cc AMA National Champion. Can-Am-mounted Gary Jones wins the 250cc title (his third in a row, four if you count his “top American” status in the 1971 Inter-Am Series), but Karsmakers is allowed to race in the two-stop “AMA Yamaha Super Series of Stadium Motocross,” which we now know as the AMA Supercross Championship. Fortunately, by the next year the citizenship rule is gone, opening the door for an eventual flood of top talent coming to the US from all over the world.

1977: In the series-deciding 125 national final in San Antonio, Texas, Yamaha’s Bob Hannah was ordered by his team to “Let Brock Bye,” an infamous pit board with two misspelled words out of three. Hannah did as he was told, handing his spot to Glover, who then was able to tie Suzuki’s Danny LaPorte in points. He won on the tie-breaker, which was based on who had the most race wins. It was in some ways a case of “turnabout is fair play,” since LaPorte himself had gained points at an earlier round when his teammate Billy Grossi slowed down at the finish line to let him by. Glover never asked for the controversy, and he prefers to be remembered by what he did in the years to follow—he won five more AMA Motocross Championships, which makes him second on the all-time list to Ricky Carmichael.

1979: The AMA had invoked a claiming rule in 1976 that set a specific price on any motorcycle in the race, allowing privateers the opportunity to literally claim and purchase any bike in the race. For three years it caused heartburn among the factories, though no works bike left their hands. But in 1979 a privateer named John Roeder attempted to claim Marty Tripes’ works RC250. All four Japanese factories counter-claimed the bike and suddenly the AMA had a dozen claims for Tripes’ bike. (The factories had decided to try to help one another keep their bikes by working together to tip the odds in their favor in a blind draw.) When the time came to reach into the sack out a chip, Roeder drew first and pulled out the #1 chip. The bike was his. Roeder never raced the bike, but he did hand it over to Cycle magazine, who later tore the bike down and looked inside the engine. The complete story of the claiming rule can be found right here.

1983: On the infamous “Suicide Mountain” of Saddleback, a triple step-up jump that was practically three sheer cliff faces, Danny “Magoo” Chandler got DQ’d from the 500 national after he rode his bike backwards down the track after a crash. He would later protest the disqualification from the AMA at that summer’s Unadilla 250cc Grand Prix by riding on his bike backwards across the finish line in the 500cc Support Class.

1985: It was Jeff Ward’s turn to go backwards after crashing during the winner-take-all Rose Bowl SX finale. But rather than dock the series points leader or DQ him, as the precedence on Magoo and Glover and others had been set, the AMA decided to fine him $500. That was key because he was able to get the points he needed to hold off Glover for the 1985 AMA/Miller High Life Supercross Championship.

1986: The AMA rolls out its “production rule” that eliminates “works” bikes and forces all of the manufacturers to race motorcycles that could be purchased by the public. The ruling ends the era of the exotic works bikes that began in the early seventies and also makes motocross bikes better across the board. The rule is still in effect thirty years later.

1991: The Hangtown National was hit by a crazy rainstorm that literally turned the middle of the valley track into a small river. The AMA decided to try to run the race—at least the first motos. The 125cc riders survived their first moto with DGY Yamaha rider Doug Henry earning his first-ever win. The 250s, on the other hand, barely made it to the finish line, and top contenders Jeff Stanton, Jeff Ward, and Damon Bradshaw all drowned out their bikes in the deep water. Privateer Honda rider John Dowd won, but the real story was second-place Jean-Michel Bayle, who rode a cautious race and earned 22 points for second-place, giving the Frenchman a sizable points lead. JMB would go on to win the AMA 250 Motocross Championship by 26 points over his teammate Stanton, without winning a single race.

1994: Ohio-based motorcycle enthusiast Bud Maimone releases his first hand-built Cobra minicycles, and his son Brent wins the AMA Amateur National Championship at Loretta Lynn’s in the 51cc (7-8) on one of just two Cobras in the field, which raised eyebrows since the brand had to have at least fifty available on showroom floors across the country. Regardless, the Cobra makes a huge impression on the industry, and within a few years practically every kid in that class is aboard a Cobra minicycle.

1998: In what will became the single most controversial ruling in AMA Motocross/Supercross history, the AMA decides on a four-stroke exemption rule that allowed 450cc four-strokes to compete against the common 250cc two-strokes (and later 250cc four-strokes to race against 125cc two-strokes). While the effect was not immediately apparent, by 2006 every factory team would be racing thumpers in both classes, much to the chagrin of the Internet.

2004: Kevin Windham literally drilled Yamaha’s David Vuillemin off the track on the first lap, ruining the Frenchman’s race. The AMA did not black-flag Windham, though they did dock him 10 points and fine him a large sum of money. He appealed on the points deal and won, getting his points back. Check this out at the 4:00 mark.

2006: After several incidences of riders losing 25 points for having something wrong with their fuel (either too much lead or oxygen), the AMA informs series points leader Ricky Carmichael that he had too much lead in his fuel tank for the St. Louis SX and docks him 25 points, just like it had done with Yamaha’s Chad Reed and Kawasaki’s James Stewart the previous year. RC makes a very public and compelling case that neither he nor his team ever touched the fuel, nor did it affect his four-stroke bike’s performance, and the AMA eventually gets overruled and Carmichael gets his points back, then goes on to win the 2006 AMA Supercross Championship.

2014: Days after Yoshimura Suzuki’s James Stewart won the High Point National in mid-June the FIM informed him that he had tested positive for a banned substance (trace amounts of amphetamine) back in early April. Stewart is placed on “provisional suspension” by the FIM but is allowed to continue racing the Lucas Oil Pro Motocross Championship because it isn’t sanctioned by the FIM or the AMA, but rather AMA Pro Racing. After a long summer and autumn of appeals and protests, Stewart is granted a Therapeutic Use Exemption (TUE) for Adderall, which is a prescribed drug used to treat ADD and includes the trace amounts of amphetamine, as well as a sixteen-month suspension that knocks him out of both the 2015 Monster Energy Supercross tour as well as this summer’s Lucas Oil Pro Motocross Championship because he is ineligible for an AMA card, and thus an AMA Pro Racing. He is appealing the lengthy suspension and hopes to come back sooner. When he does, he is allowed to use the exact same medication that he used in the first place because he now has the paperwork and approval of the FIM.

2014: Smartop/Motoconcepts Racing rider Mike Alessi delivers a T-bone into the side of Broc Tickle at the Atlanta SX, knocking Broc down and off the racetrack. He is later fined $4,000 but is nonetheless allowed to compete. He finishes sixth in the main event, one spot better than the unfortunate Tickle.

2015: Chad Reed is black-flagged by the FIM referee John Gallagher for retaliating against Trey Canard after the Honda rider ran into the back of him at the Anaheim 2 Supercross. To be continued…