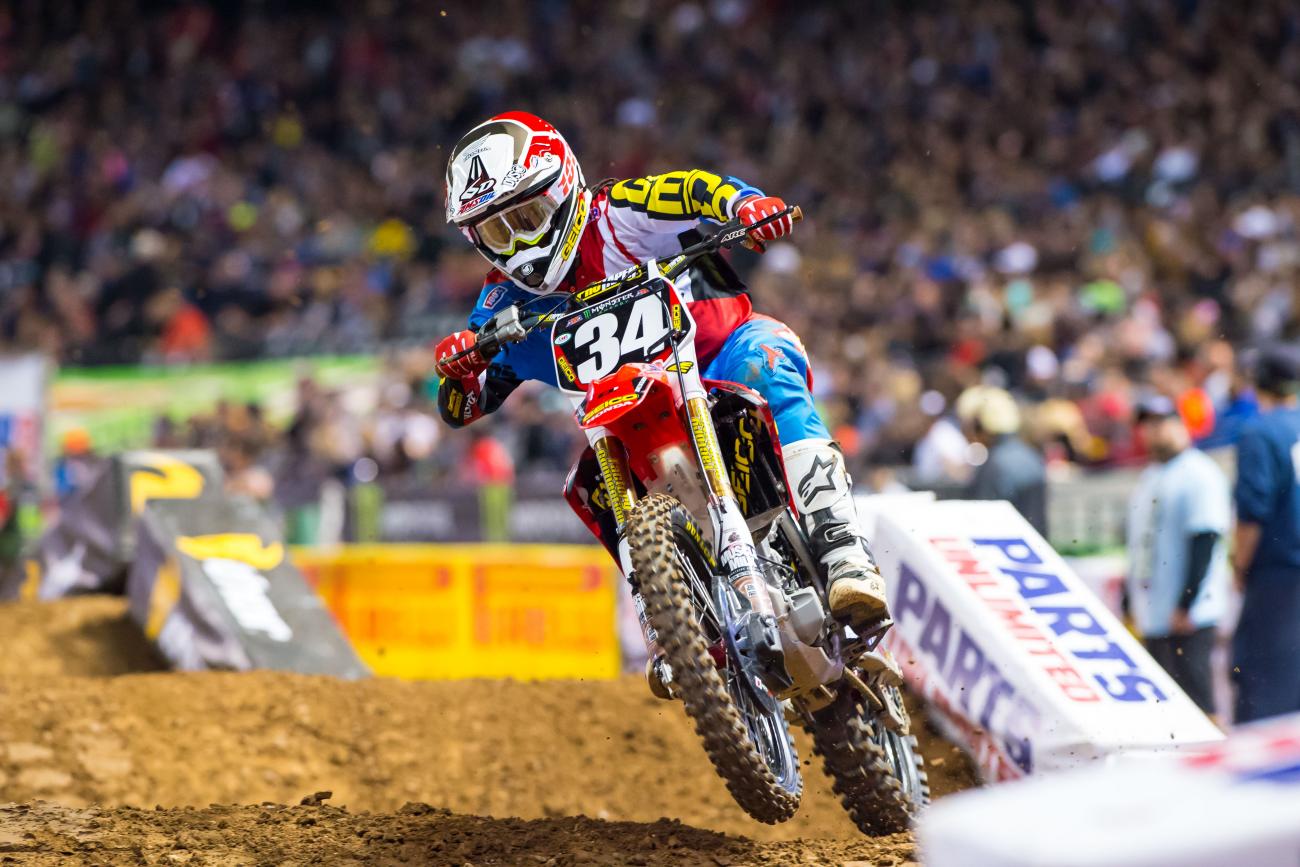 For 2015, Racer X has partnered with MotoDynasty to bring you Fantasy Supercross. We’ll be offering cool weekly and series prizes; dynasty play; private leagues that just you and you’re buddies can play in; weekly fantasy previews; and weekly podcasts all focused on fantasy. This may be the first time many of you have played, so make sure to check out this preview, which features how scoring works, how to play, and more. Or visit motodynasty.racerxonline.com.

How many got it right?

As we continue to chug along, more and more players are doing a pretty fair (I won’t go as far as saying good) job of getting the top three correct. And then…

...we get to cases like Eli Tomac, where only 12 percent of players had him finishing third. It’s okay, as you’ll see below we struggle too. We’re all in this together, unless you’re the player who picked all three in each class correctly. If that’s you, go ahead and pack up and leave—you don't need help from us losers. If that's not you, stick around—maybe we can help. Let’s take a look at last week’s top three.

1.) 37 percent of all entries picked Roczen to finish first.

Hopefully some of you followed our advice and were cautious when judging qualifying. As we said last week, it’s vital to study qualifying to make good picks, but one must use caution. We could list the many reasons as to why, or just show you some examples of the best, and worst, and what was right on from qualifying to main event results.

Need a refresher on how scoring works? Go here. Want to view the scoring chart? See below.

If we can, let’s get real for a minute. You’re more likely to see a leprechaun riding a unicorn into a pot of gold than picking twenty-two riders in their correct position. It will never, ever, ever happen. Okay, it actually may but there’s a .00000001 percent chance it will. But that’s not what this league is about. It’s about picking twenty-two riders close to their finishing positions. (PICK ALL TWENTY-TWO.) You earn points just for picking—if they make the main. Every week we’ll give you a couple top picks and sleepers to watch. Also, make sure to check our Injury Report before making your picks for the weekend.

Josh Hill | Valli Motorsports Yamaha | Last week: DNQ
Too much talent not to make the main for a third consecutive week. A top-fifteen pick is not a terrible idea, either.

Brett Metcalfe | DirtCandyGraphics/PRBC.comSuzuki | Last Week: 12th
Metty had his best finish on the young season last week, and is looking better and better. Could be a sneaky top ten pick.

Jackson Richardson | XPR Motorsports | Last week: 11th
Richardson was a main event mainstay in the East Region last year, and after a hiccup at A1 has made two in a row. Top-fifteen is a good play.

Cole Martinez | Strikt Slaton Yamaha | Last week: 17th
Martinez has made the main in all three rounds, and we’re betting his makes his fourth this weekend.

Aaron Plessiner | Yamalube/Star Racing Yamaha | Last week: 13th
Last week we told you to pick him top-five. He went on to have his worst finish of the season. We apologize on behalf of Aaron. A top-five pick is still in play.

Against the grain is not always a bad pick. For example, if you had Andrew Short outside the top ten last week, you picked up some points. Or, if you we’re part of the 5 percent that had Kyle Chisholm fifteenth or better, you picked up a ton of points. As you’ll see below, it can go the other way as well.

- 54 percent of players picked Andrew Short to finish tenth or better, and this might have been based on us pushing you to do so here for the first three races. He finished twenty-first.

- 29 percent of players picked Kyle Chisholm to make the main and five percent had him finishing fifteenth or better; he finished thirteenth.

- 14 percent had Blake Baggett tenth or better; he finished tenth.

- 29 percent had Dean Wilson tenth or better; he finished eighth.

- 0.1 percent had Cade Clason making the main; he finished eighteenth.

- 89 percent had Jessy Nelson fifth or better; he finished sixth.

- 37 percent had Zach Bell tenth or better; he finished nineteenth.

At this point in the season, making bonus picks is stupid (see, Roberts, Jordan). It’s not worth the risk at this point, and can cost you valuable points (see, Roberts, Jordan). Some of you like to live on the edge, and we fully understand and respect that. That’s why we’ll do our best to help you succeed and even make some suggestions—put as much stock in those as you wish.

My Picks for Oakland

ADVICE FROM THE SO-CALLED EXPERTS

Last week Jason Weigandt offered his “advice”. Unlike Andrew, he actually did pretty well. He told you to pick Bowers in the “1-4 range” and Bowers got second. He said to put Blake Baggett “10-13” and BB delivered his first career top ten. And just when we thought everything was going swell, he offered this…

Quote: “Chad Reed does much better than the first two races. His bike broke at Anaheim, and he always sucks at Phoenix. Last year he finished ninth there and then won Anaheim 2. Think about it.” And: “Matt Bisceglia is riding much better than his results have shown. I think he’ll finally have a solid night. Top five, perhaps?” About that…

We’ve decided to throw Weege out and bring in Matthes. We did this for two reasons: 1) He is currently leading the Racer X League and 2) he threatened us. Take it away, Steve.

Note: This is the first week I (Chase) have not led the league, and it’s not going well.

I’m currently in first place in the Racer X Staff league on MotoDynasty and working my way into complete domination real soon. It’s only natural that Chase asked me to deliver the fantasy moto sermon this week [Ed. Note: Matthes said he would fly to Morgantown and hurt me if I didn’t] because, well, Tina Turner said it best: “I’m simply the best…better than all the rest.”

The number one thing you can do is listen to the N-Fab Racer X Fantasy Moto Podcast with Jason Thomas and me because we actually do have some knowledge about this sport. And the other three things you need to do is put in a line-up during the week in case something happens on Saturday and you can’t get in and set it final, DO NOT pick Martin Davalos, and reset that line-up as late as you can after practice on Saturday.

1.) Eli Tomac and Kenny Roczen will both be in the top three. I know this isn’t groundbreaking stuff but with the slightly bigger track in Oakland, some moisture in the dirt, and Oak-Town's tricky past, I think the two hotshots will be locks to be on the podium. If you want to put Ryan Dungey (the Doug Jarvis of fantasy moto) on the podium also, I’m ok with that.

2.) I think Cooper Webb wins again, and I’ll be putting him up in the number one position. I think his past two wins were a sign that the Webb Man is ready to take this thing over. His confidence has to be at an all-time high right now.

3.) You win your leagues with the risk bets. In other words, the privateers. I got Kyle Chisholm, Josh Hill, Nick Wey, Ben LaMay (although keep an eye on if his wrist injury holds him back) and Jimmy Albertson all back in the 450SX main event.

4.) You can go ahead and pick the fastest qualifier, holeshot, and the two heat winners but I’m out. Not only are those not good odds to get right; they penalize you for getting them wrong. And if you happen to nail them right, the reward isn’t great enough. So stay away, man, stay far away.

5.) Chris Alldredge has had a rough start to his 250SX career so far, but I think he figures it out in Oakland and puts it into the top seven. Stamp it.

DISSAPOINTING RESULT OF THE WEEK

@pulpmx @JasonWeigandt my 11-yo son and 13-yo daughter are beating the entire @racerxonline staff! #yikes

Winning is awesome. Congrats to these winners from last week. You’re all number one in our book.

If you didn’t win, don’t freak out, there’s always this week. Check out what we have on tap.

* To be eligible to win weekly and yearly prizes, you must go the paid route. You can play for FREE, but you will not be eligible for prizes.

Want to challenge the Racer X team? Here’s your chance. Each week we will run down the top five in the overall standings of the Racer X Fantasy League. Did you beat us this week? Let us know in the comments.

Thanks for coming out. Hopefully you liked the videos. If not, make sure to complain in the comments. Have any questions or suggestions, hit me up at chase@racerxonline.com