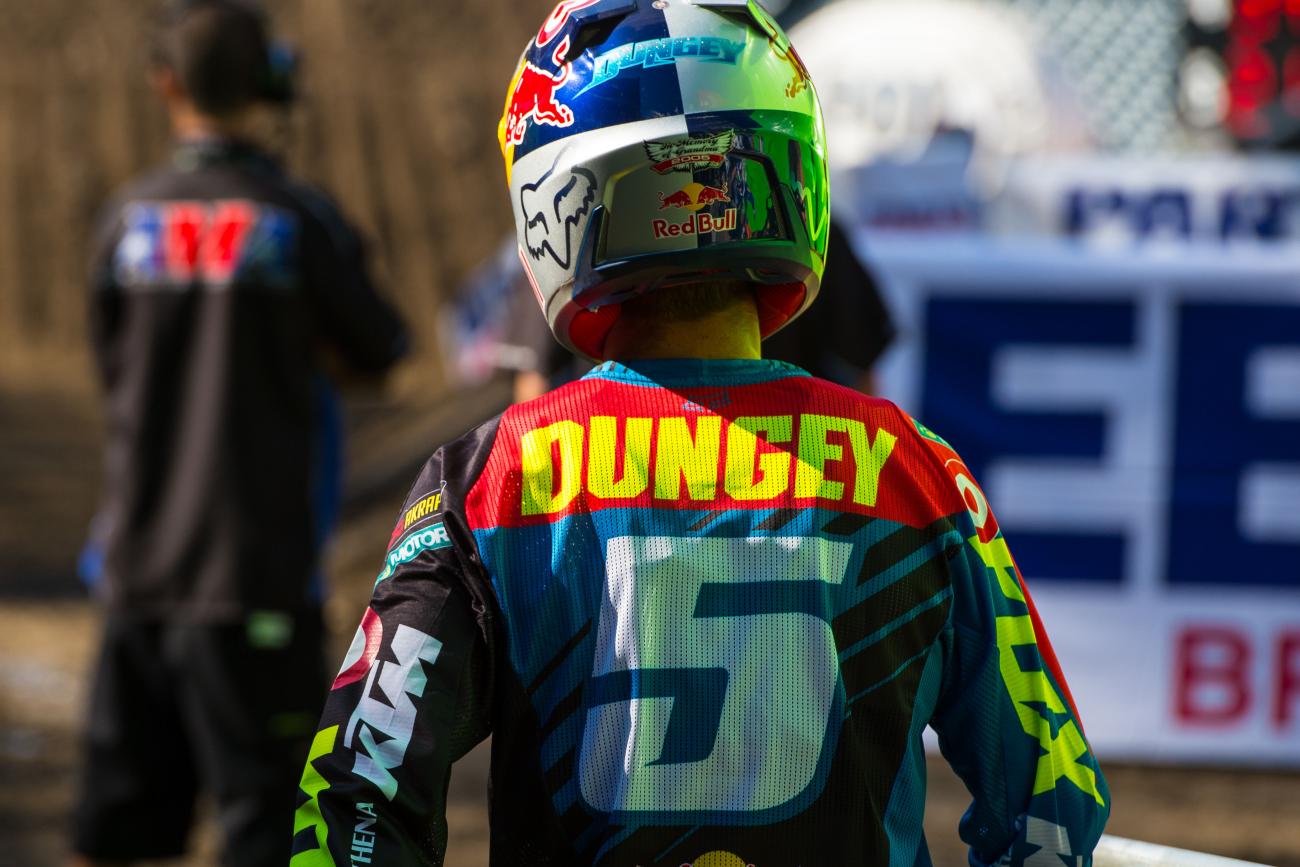 After watching Cooper Webb back up his Phoenix domination by coming from way back at A2 to take the win, it’s pretty tough to think that the road to the West Region 250SX Championship doesn’t go through him. Sure, there others who are still in it, such as Tyler Bowers, Jessy Nelson, Zach Osborne, and Justin Hill to name a few, but they won’t be for long if they let Webb keep notching wins. Will Webb make it three in a row in Oakland, or will someone put an end to his current run? –Aaron Hansel

While the Oakland round of Monster Energy AMA Supercross, an FIM World Championship, is part of the West Region that opens the season, the northern California dirt is a big departure from the soil the riders have seen so far down south. It’s softer and sandier, and it wears down pretty quickly. The result is usually a track with lots of traction that allows guys to twist the throttle a little earlier and harder. Of course, it gets pretty sketchy toward the end of the night sometimes, too, with slick patches in areas, and ruts in others. Will the Oakland dirt create a different kind of race with different players up front? –Hansel

In second place with 60 points to Ken Roczen’s 72, Ryan Dungey is right in there like he always is. But don’t think for a minute that he’s satisfied standing on the left or right side on the podium every weekend—he wants to be in the middle just as much as anyone else. He was going for it last week too, cutting into Roczen’s lead every lap before a bobble erased his hard work and solidified a runner-up finish. You know he’s going to win sooner or later, and after taking fourth, third, and second at the first three rounds, an Oak Town win for The Dunge doesn’t seem unlikely. –Hansel

It’s been impossible to watch Josh Hill in the mains at the last two races because he hasn’t finished a heat, semi, or LCQ in qualifying position since A1. Nobody was calling Hill out for wins before the season started, but him not making the last two mains is still surprising. Hill came into the season with a deal that was only guaranteed for the first six rounds, and while simply making mains won’t ensure Hill’s presence out east, it certainly isn’t going to hurt. Let’s hope Hill ends up being one of the things we get to watch in this weekend’s 450SX main. -Hansel

Do you have any idea how hard it is as a writer to refrain from making cheesy jokes about Broc being TICKLEd with his fifth-place finish at A2? There are a million ways to go with this that would leave this writer feeling quite tickled with his clever wordplay! Unfortunately, pretty much all the jokes about The Tickler are all used up, and none of them are that funny anyway. What we can say is that Tickle seems to be picking up right where he left off last year—he went 5-4-6 at his last three races in 2014 before getting sidelined with serious injury. Let’s see if he can keep the good vibes going in Oakland.-Hansel

GEICO Honda’s Eli Tomac finished twentieth at A1, and everyone was bummed. He won Phoenix, and everyone was excited. Then he was back down to earth with third at Anaheim 2. When asked what the difference between Phoenix (a win) and A2 (third) was, Tomac told Racer X: “It’s the starts. Yes, it’s annoying when everyone says that, but there’s too many fast guys to start in even seventh or sixth place right now.” Tomac elaborated in a team statement earlier this week: "I've learned that the heat race finish is super important to how the main event goes. Knowing that, I need to be more aggressive if I am further back in the pack in those heats.” Tomac had won his heat at the first two races, and started well in those mains. Will his heat race focus pay off in Oakland? – Chase Stallo

Unfortunately, injuries are the nature of the beast in supercross. We avoided major injuries this off-season in 450SX, but the mash unit is slowly starting to fill. BTOSports.com KTM’s Justin Brayton will miss a few rounds with a shoulder injury; AutoTrader.com/Toyota/JGR Yamaha’s Weston Peick will as well with a foot injury; Smartop/MotoConcepts’ Mike Alessi is nursing a knee injury, but will race. With the top thinning a bit, it opens the door for privateers to make the main. Main event regulars a season ago—Ronnie Stewart and Nick Schmidt—have yet to make a main. Cade Clason made his first career 450SX main last weekend and is looking for more. While guys like Tevin Tapia and AJ Catanzaro are looking for main event number two on the season. Which privateer will make the most of their chances this weekend? - Stallo

“Wrong place wrong time, such a rookie. #rookieseason,” Jason Anderson wrote on social media following A2, where he got caught in the carnage following Andrew Short’s crash. It may have been the wrong time and place, but certainly not the wrong position, as Anderson was running in third (he finished seventh). Anderson appears to be a mainstay at the front, and already has a podium under his belt. Is a return trip to the box in store for Oakland? – Stallo

In a similar role to a season ago (albeit he will race all twelve rounds of Lucas Oil Pro Motocross in 2015) Phil Nicoletti will step in off the couch to “Phil” in for the injured Weston Peick this weekend. Although Oakland will mark his first race of the year, the team said Phil has been putting in laps at the supercross track all off-season. Can Nicoletti jump on Peick’s bike and get off on the right foot (no pun intended)? - Stallo

Shane McElrath seems to be following the progression of Cole Seely and Jessy Nelson before him at Lucas Oil/Troy Lee Designs. In his second season, the North Carolina native looks more comfortable and confident—and made a statement with his first career heat race win last weekend. “It was much needed, and that’s where I feel I should have been a long time ago,” McElrath said. McElrath has shown the speed to be a front-runner but has yet to put it all together in the main. Will it happen this weekend? - Stallo