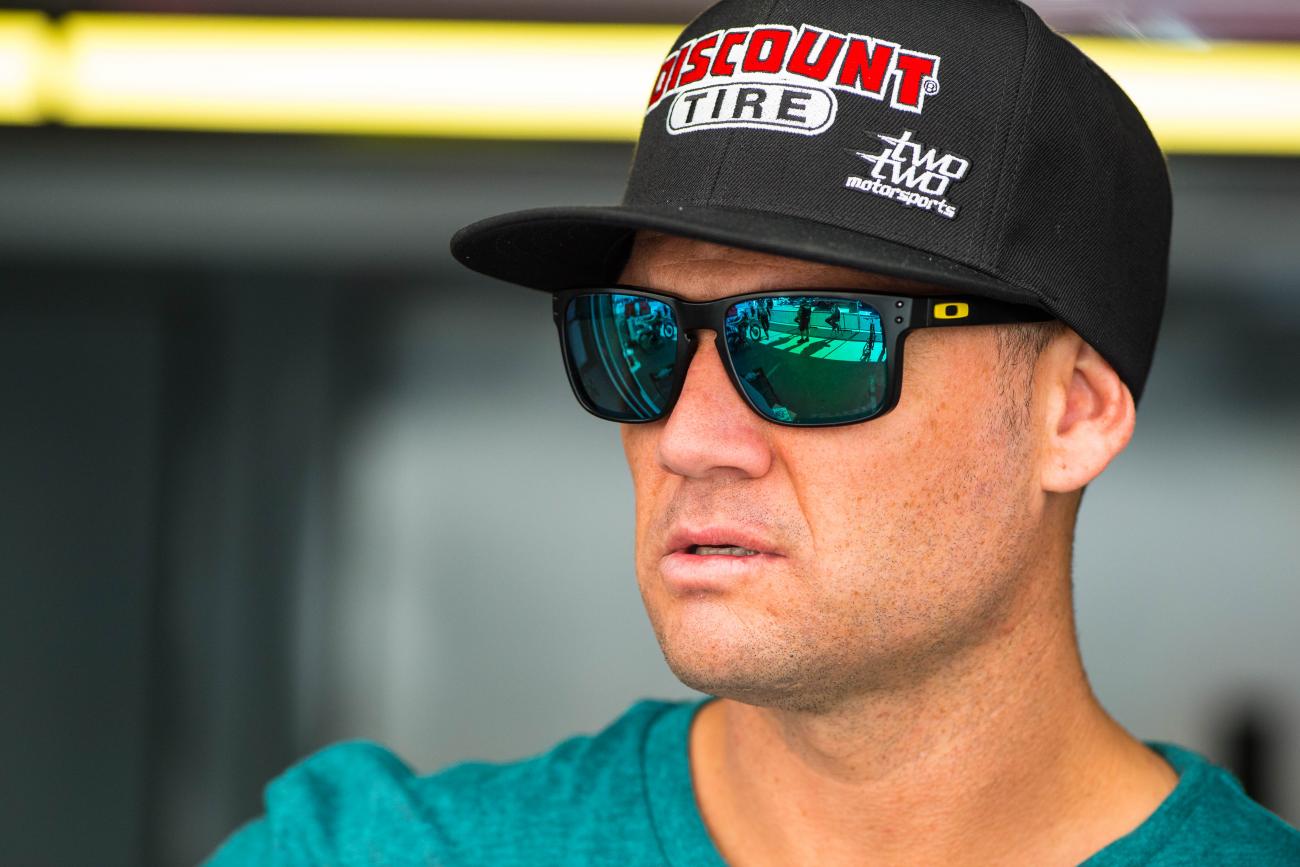 Denny Stephenson: I read someone write, "What Trey did was dumb, what Chad did was dumber, and what Gallagher did was idiotic." Basically no one likes getting jumped on. You can't assume to ever know where the guy in front of you is going like Trey did. I don't believe Chad meant to knock Trey down. But, honestly, I believe the real problem lies in the overreaction of John Gallagher. I know John. I like John. Hell, I had a beer with him as recently as Saturday night after last year's Seattle Supercross. But I've also worked with John back in my arenacross years. John arrived when the AMA came in and tried to soften up the bullring-chaos slam-or-be-slammed mentality we already had in arenacross from years of racing under the Mike Kidd brand. Naturally, we butted heads a few times. I think John honestly just wants everyone to get along. That's great, but unicorns don't exist. He rules with his heart more than his brain, and I truly believe when he saw Trey get bumped, hit the Tuff block, and crash right in front of him, he probably almost shed a tear and bellowed for the black flag almost immediately. One man shouldn't have that much control. It should've been handled after the fact. I've punted and been punted often and have never once wanted my competitor to be black-flagged. I always just tried to handle it in the pits after, which probably wasn't a good idea either.

Jason Thomas: My take is that there were three mistakes made. Trey miscalculated where Chad was going and took both of them down—mistake one. Chad then lost his temper and took things too far with Trey, causing the Tuff block rendezvous—mistake two. Then, in the grand poobah of mistakes, John Gallagher decided to wield his black flag and disqualify Chad mid-race—mistake three. If John was trying to not be outdone in the escalating mistake meter, he succeeded mightily.

David Pingree: Trey made a mistake—not uncommon in racing. His line choice ended badly for both he and Reed, but it was certainly not malicious. Chad let his emotions get the best of him. He’s frustrated with his season and had his best night going at A2 when that happened. He probably didn’t even mean to knock Trey down, but rather just give him a nudge as he went by. Unfortunately that went badly also. The decision to black flag Reed for that was made in haste and it was the wrong choice. These guys make a living and fund their teams by being on the track. How stoked do you think Discount Tire is on supercross right now? The powers that be could have let him finish the race and then hand down a penalty. And, much like the James Stewart verdict, disqualification is a lame penalty. Who wins in that scenario? Chad scores 0 points, the fans don’t get to watch him ride, and his sponsors lose their main rider. Why not assess a monetary penalty and donate it to a good charity? Have Chad do a public service video on rider safety… I don’t care—just try to make some positive out of it. The way it was handled was dumb.

2. Does this black flag now set a precedent? Are other riders going to be worried?

Stephenson: I certainly hope not. Riders have enough things to worry about out there without worrying if they hit someone too hard. Oddest thing I've seen or read are some of the old-school moto guys who are on their black flag soap box. They clearly forgot the days of Hannah and Howerton. They're trying to say someone should've black flagged one of those two. Give me a break. Stop your whining and let's go racing.

JT: Unfortunately, I believe it does. Every time any incident occurs on the racetrack now, someone will be calling for a black flag. That’s a shame. Whether or not it will be warranted, the plea will be made and officials will have to respond in kind. I don’t know if riders will be worried, but if decisions are going to be made as hastily as that one was, I sure would be.

Ping: I hope not. See above response if you aren’t sure how I feel about the black flag.

3. Cooper Webb is now on a roll. Explain what winning that first race does.

Stephenson: The first win is pretty overwhelming. Mike Craig had jumped on me at the 1990 East Region opener at Houston and I got an eighteenth. I won the next weekend in Atlanta, and from then on it was a train coming down the tracks. Confidence is everything in supercross. And if Coop’s first win was anything like mine that night, the Yamaha guys, Wardy, Chicken, and Roy Turner took him to his first strip club, The Gold Club. Oh wait, that was the nineties.

JT: For Webb, it was just a matter of time. I think he had a ton of confidence coming into the season, but surely winning that race in Phoenix had to help. The biggest concern I have for him is that his starts are very inconsistent. Had Jessy Nelson not crashed, I think the results would have been a bit different and the tone a little less upbeat. Nelson has his starts figured out and is dangerous out front as we saw at Anaheim 1. I think Webb is the fastest guy in the class, but that doesn’t always equate a championship.

Ping: I tell this story all the time in regards to confidence: After I won my first race I dropped my lap times by almost two seconds at the same track I had been riding all year long. There was no reason for it other than confidence. Cooper was going to win some races this year, without question. With the momentum he has going now, somebody needs to step up and stop him or this thing will be all done before we get into the East Coast swing.