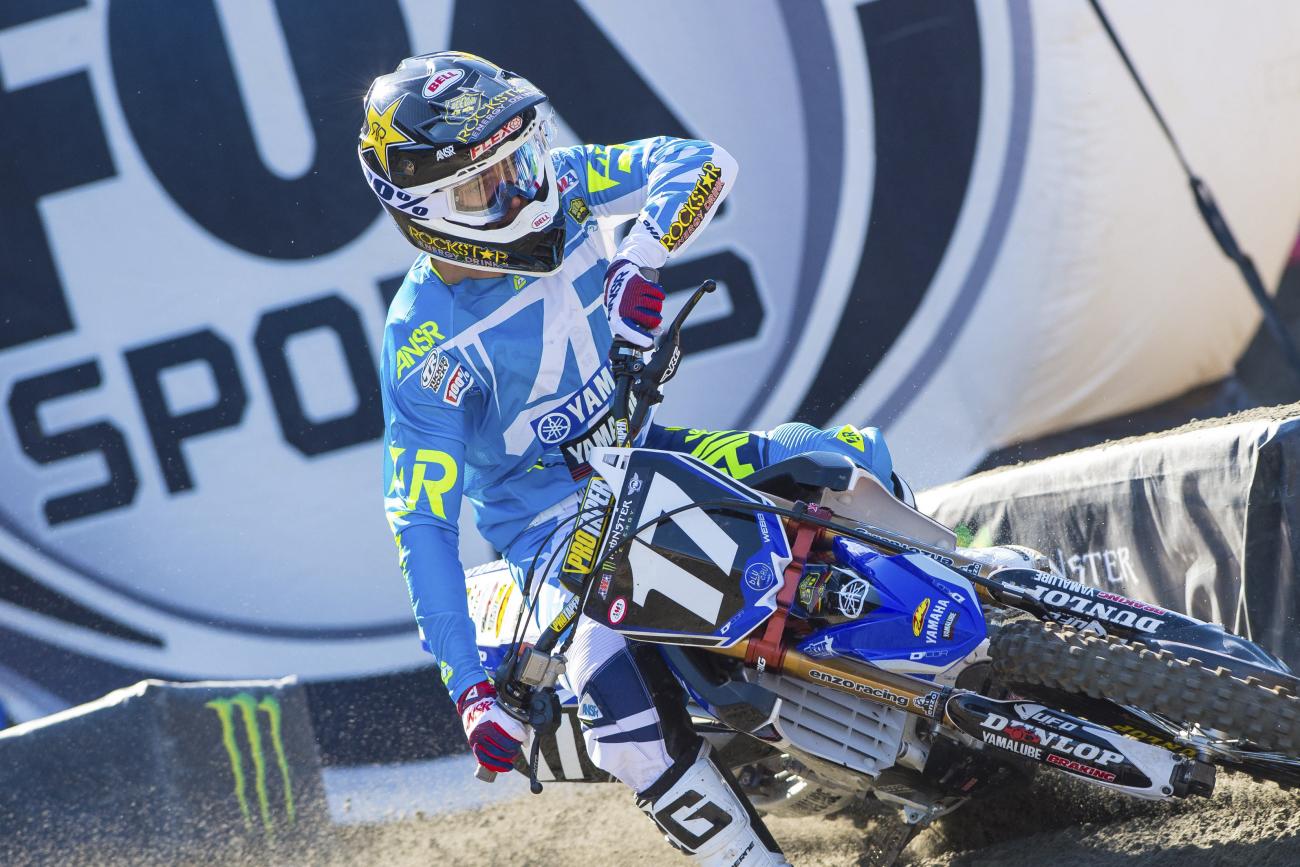 Yamalube/Star Racing Yamaha’s Aaron Plessinger didn’t come into 2015 surrounded with as much buzz as some high-profile rookies have, but after Phoenix it just might be time to fire up the big blue hype machine. Plessinger looked great in Phoenix—he overcame a big gap in the main and was pressuring Jessy Nelson for third by the end of the race. He ended up dropping a spot to Tyler Bowers on the final lap, but it was still a great performance, especially for only his second pro supercross race. A podium, or even a win, at A2 for Plessinger isn’t completely out of the question. –Aaron Hansel

We all went nuts over Jessy Nelson after he dominated the opener, and now it’s time to go nuts over Cooper Webb too—he straight handled the field out there in Phoenix! It was obvious Webb was on the gas from the moment he rolled into the stadium for qualifying too—he was flying and even posted the fastest time in the first qualifier despite having his best lap deleted due to stopping on the track. That’s right, his second-fastest lap was still faster than anyone else’s! With speed like that you know he’ll be up front this weekend too. -Hansel

Eighteenth place. That’s the position Shane McElrath was in after lap one in Phoenix, but when fifteen laps had elapsed he’d bobbed and weaved his way all the way up to eighth on a tough track that had most of the guys settling into a pace and not pushing it. Earlier in the night he took second in his heat behind Jessy Nelson, and his qualifying time wasn’t too shabby either—seventh overall and one of only seven 250SX riders to dip into the fifty-six-second range. Remember McElrath when you’re making your fantasy picks—he could be on a steady rise. –Hansel

The tracks of Monster Energy Supercross typically start out relatively easy before slowly getting harder as the season progresses. At Phoenix, however, the degree of difficulty was significantly higher than at the opener. Will this rapid escalation continue or will it be back to basics at A2? –Hansel

After narrowly avoiding privateer status for 2015, Malcolm Stewart came out and recorded a career best with a second place in Phoenix. He also posted the third-fastest lap time behind Jessy Nelson and Cooper Webb. Clearly, Stewart is meshing well with the crew and bike over at GEICO Honda. Can he take another step forward and get his first win this weekend? -Hansel

While it appears Eli Tomac and Ken Roczen have this long, heated rivalry, it’s really not the case in supercross. They raced the same region once in 250SX—a tightly contested 2013 championship battle—and Tomac was injured a majority of their rookie season in 450SX. A lot of their battles came outdoors on 250s, like during the 2013 season, when they combined to win 21 of 24 motos. Like the Ryans before them, though, they seem to have a mutual respect for each other—"That's one good thing about Kenny and I: We respect each other and have the same mind-set," said Tomac after Phoenix. The question now arising is: Are we looking at the next great rivalry in the sport? Time will tell. In the meantime, can the other title contenders make a splash in supercross’s return to Anaheim or will it be Roczen versus Tomac at the top again? – Chase Stallo

If Chad Reed were to make the main event on Saturday night—barring something unforeseen, we have faith that will happen—he will tie Jeremy McGrath (173) for fourth on the all-time starts list. (Mike LaRocco is the all-time leader with 228.) With a win, Reed can also pass McGrath and James Stewart (eight) on the all-time Anaheim wins list. Reed has been there, done that in this sport, and although he’s struggled in the early going, he did win here a year ago in dramatic fashion. Judging by our recent poll question, many don’t think he’ll do it again, but he did finish ninth in Phoenix last year before snagging the Anaheim 2 win. Will Reed overcome his early struggles on his historic night? – Stallo

It’s hard to say Trey Canard was off in Phoenix when he came from eighteenth to eighth. But team manager Dan Betley said following the race, “Trey rode a little stiff all night long.” The good news, according to Betley, is that Trey “thinks he knows what was up.” Canard is still smack in the middle of the championship chase—just 14 back of Roczen—but will want to get the train back on rails this weekend. Will he return to the podium for a second time in Anaheim? - Stallo

For a rider essentially in his first professional championship battle, Lucas Oil/Troy Lee Designs’ Jessy Nelson showed the fortitude of a veteran in Phoenix. Nelson didn’t have his best stuff last weekend—“I just rode super tight”—but did exactly what he needed to do by staying on the podium. Nelson took the high road after feeling he was getting too close to Malcolm Stewart—“Malcolm and I got close over a couple jumps, and I was like, I don’t want to get too close. I’m trying to win a championship here and I didn’t want us both to go down”—and it paid off. Can Nelson continue to ride with patience and maintain his championship lead? - Stallo

In an interview with Eric Johnson earlier this week, Jake Weimer seemed very content in his new home with Team Tedder/Monster Energy Racing. “I don’t know. I haven’t gotten a phone call from anyone and I’m pretty happy at the moment. I like where I am at the moment,” said Weimer when asked about Wil Hahn’s vacant factory ride. Weimer was at the end of his rope last year—results and injuries cost him his factory spot. But he seems relaxed in his new situation, and the results are showing. An 11-9 start to the season has Weimer ahead of factory guys like Reed, Millsaps, Brayton, Baggett, Seely, and others. Can he keep the momentum rolling into A2? - Stallo