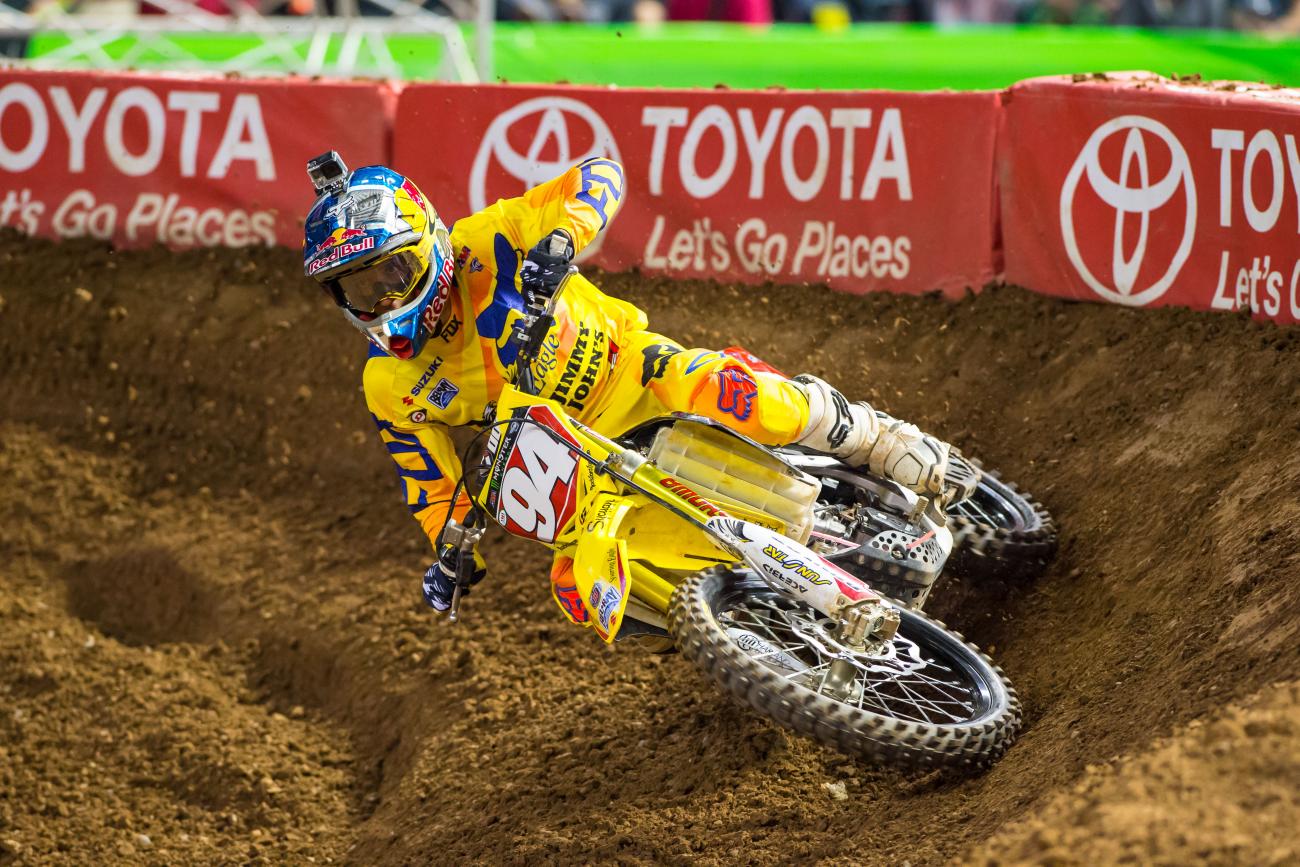 1. Most of the 450 guys looked tired at the end of Phoenix. What is it that makes one SX track much more demanding than others? Can you build a track at home that replicates it?

David Vuillemin: The track looked demanding this weekend. There were a lot of turns and ruts in them. The more turns on the track, the more physical it is. The ruts are tough more so on the mental side of it. You gotta be alert at all times, which makes you tired mentally. You have to be smooth, and instead of riding a twenty-foot-wide track where it doesn't really matter where you are on the track, in Phoenix the track became ten inches wide in sections. There were a lot of sit-bounce-triples coming from rutted turns. All those points made the track tough.

For the second question, I don't think building a test track like this is the solution. The top guys "only" race twenty-eight laps a night, which is less than twenty-seven minutes in Phoenix. Those guys ride four times more on a practice day, and if you add their training on top of that, an eighteen-minute main event shouldn't be that difficult. When I wasn't prepared and not winning, some mains were tough. When I was prepared and winning main events, race day was a walk in the park.

Jason Thomas: This track was very difficult. There were a lot of triples right out of turns, and switchbacks in between. Also, the whoop section was very long, which raises the heart rate higher than normal. Most riders hold their breath through the whoops so they get a spike when they finally breathe again exiting. Add in the fact that the lap times were the longest we have seen in a long while and you get a recipe for exhaustion.

David Pingree: Tighter tracks are typically more physically demanding than faster, flowing tracks. There were several spots in Phoenix where guys had to triple out of a turn and then land on the brakes to set up for a turn and another obstacle. That kind of tight, technical track doesn’t let you breathe regularly, and doesn’t give you a chance to rest. We need more tracks like this.

2.  How do you avoid freaking out if your first two races aren't up to par?

Vuillemin: There is nothing to freak about after two races, but they have to address their issues. There are still fifteen races to go, and I believe there is enough time to turn things around if they fix their problems. But, for most of the riders struggling right now, they've been struggling with the same issues for the last few years. It shows you that they didn't fix their flaws.

JT: Every situation is different and the circumstances will dictate if big changes need to be made. For a guy like Chad Reed, he had a bike issue at Anaheim and then let a tough battle with Justin Brayton impede his progress. He looked great in the heat race, so I think there was a silver lining there. For a guy like Dean Wilson, it's a different landscape. Dean is dealing with the same issues he has been for the past couple of years—arm pump. He has plenty of ability and can go fast, but just not for twenty laps. I think he is nearing a panic button, as they haven't found an answer.

Ping: It’s pretty early to be freaking out, but there is likely a sense of panic for some riders who expected to be doing much better right away; Wilson and Reed come to mind. These guys just need to learn something every weekend and work on improving their weaknesses. This is a long series and there is plenty of time to turn things around.

3. There were months of testing during the off-season, but only some guys (like Ken Roczen) have their new bikes dialed in. What happens?

Vuillemin: I'm going to use one of my favorite quotes by Voltaire when it comes to testing: "Better is the enemy of the good." In our sport, contrary of road racing, Formula 1, or NASCAR, the equipment doesn't have to be perfect to perform. The rider is a huge part of it. If you start losing yourself in testing because you don't have the results you expected, it won't get any better. They have to find a set-up they're comfortable with and focus on the riding technique, their speed, and their fitness. When I watch Ken Roczen or Eli Tomac, I don't see two riders with the best bikes—I see riders that ride better than the others technically and go faster. The riders that are struggling right now have to find their comfortable set-up, and then forget about testing and excuses on bike settings and go work on the riding.

JT: I think everyone has issues with their bike that they would like to improve. Even with his win last weekend, I would almost guarantee that there were sections Eli Tomac would have liked it to work just a touch better. That's just how this sport works. The motorcycle is never absolutely perfect because set-up is all about compromise. To get the bike to turn at an optimum level, fork stiffness would have to be sacrificed, which would cause it to suffer in the whoops. Settings are all about finding what will work at an acceptable level in all sections. That is a moving target on different tracks and a never-ending process.

Ping: I agree with DV here. I think bike set-up is used as a scapegoat more than ever. I can’t recall any era where guys talked about their set-up being off more than this one. There are more parts and technology available, but a lot of these guys just need to get a decent setting and go race. Worrying about whether or not you could make the bike better here or there shouldn’t be your focus during the week; making yourself faster shou