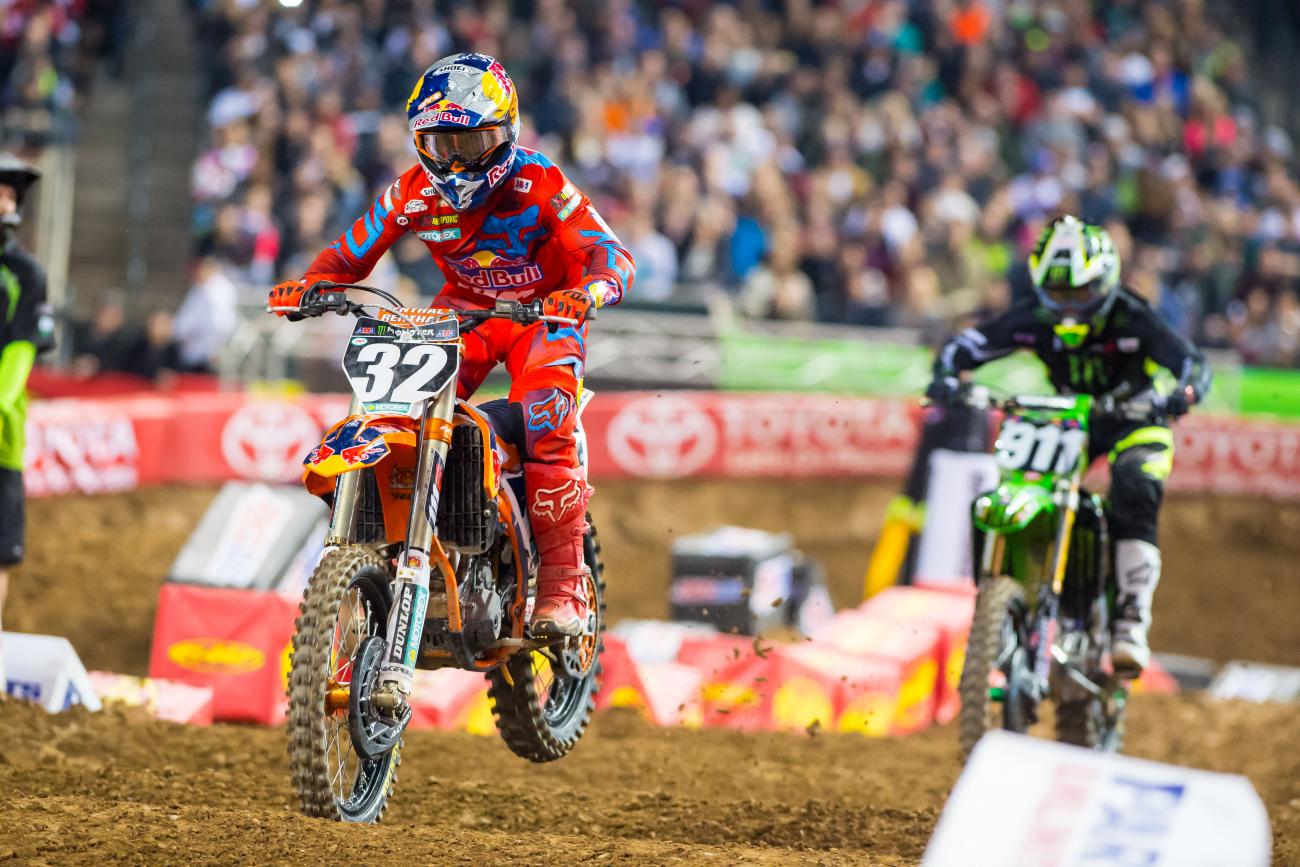 The Anaheim 1 track was considered tame and simple. The Phoenix track was said to be much more technical. The jump transitions were much tighter, and the whoops were big and unevenly spaced, which made them very tough. The soil was also a lot tackier than usual. Phoenix dirt is usually wet in the morning and then dries until it’s very loose in the main. This year’s track seemed muddier than usual in the morning, which led to ruts and an overall tackier surface all the way to the final lap of the 450 main event. “Yeah, it was a great racetrack,” said Ken Roczen, who finished second in 450SX. “It was super tacky, mixed with some slick spots but usually Phoenix gets really hard. Definitely different than usually, but it’s good to have a little bit more of a difficult track.”

The tight, tacky, rutted, technical conditions clearly took a lot out of the riders—even 450SX race winner Eli Tomac admitted he was gassed by the end of the main event. “But after that battle, I kind of think both of us were a little bit tight and a little bit gassed out. Those last five laps I was just kind of putting it on cruise control,” Tomac told Racer X.

A week after his first career 450SX podium, in his first race in the premier class, Jason Anderson was done in by a bad start Saturday. “It was tough to pass on this track but you just have to force your moves every lap, which I think I did pretty well. I’m looking forward to next week—hopefully I’ll get a better start and be in the race,” he said in a team statement. Anderson finished sixth after coming across lap one in fourteenth.

On Saturday morning, we chatted with Roger DeCoster about his team riders adapting to the all-new factory edition bikes at Anaheim. As usual, The Man didn’t pull any punches. “The bikes were good; we just needed the riders to race them to their full potential,” he said.” They don’t work if you’re not pushing at 100 percent.”

Less noticeable is that Suzuki made some big changes to the RM-Z450 in 2015, even though the bike looks similar to the previous model. The biggest change is the frame, which is less rigid than before. Somewhere along the way, Suzuki made a small tweak to the previous-generation bike and made the frame stiffer, which most riders didn’t like, and we heard James Stewart and Mike Alessi, for example, were running older frames on their 2014 race bikes. RCH/Soaring Eagle/Jimmy John’s Suzuki rider Broc Tickle told us the new frame brings things back closer to the older frame, and he likes his new bike much, much better than his 2014.

Prior to the main event, American Honda mechanics mounted road race-style tire warmers to the rear Dunlops of the CRF450R race bikes. “At some of these races, we’ll do that to get a heat cycle in the tires before we go out,” explained team manager Dan Betley. “Even though the tires cool off by the time we actually start the race, the heat cycle changes the compound slightly and helps with traction.”

Small breakthrough for Team Honda 450SX rookie Cole Seely, who won his heat race Saturday. “The heat race was good—I felt like I was flowing and riding well—but the main event just kind of unraveled on me,” said Seely in a team statement. “My start was okay, but I got into it with Chad Reed and a couple other riders. I started going backward and got arm pump, so it was tough. I’ll just take the heat-race win, build off of that and keep plugging away. The bike felt good all night.”

As for Trey Canard, he followed up his Anaheim podium with an eighth. “Trey had decent times in practice, and we’re coming away healthy, but he just didn’t have the same aggression that he did last week; some nights you have it and some nights you don’t,” said his mechanic Brent Presnell in a team statement. “I guess eighth place isn’t bad when you start eighteenth. It looked like his reaction was a little off on the start; Kenny Roczen and those guys got a handlebar on him right out of the gate, and he was just closed off at that point. We’ll look for a good result at Anaheim 2.” Said Canard: “I’m not happy with the result, but I believe that over the course of the season, all the top riders will have a night like I had here at Phoenix.”

Red Bull KTM’s Justin Hill battled a head cold the week prior to Phoenix and ran out of steam in the main. He finished sixth. “Overall, I was hoping to be in podium contention tonight,” he said in a team statement. “I struggled with a head cold earlier this week and it affected my riding tonight. I am hoping to feel 100 percent this next week and come back stronger for the next Anaheim event.” Hill, a pre-season title favorite, is currently fifth in points, 12 back of Jessy Nelson.

Nelson, who one week ago claimed his first career 250SX win, did exactly what he needed to do following a big win—finish on the podium the following week. “It wasn’t my best race, but I’ll take what I can because I felt like I rode a little tight there at the end,” he said in a team statement. “I’m definitely super happy to get on the box and still have the points lead.”

Discount Tire/TwoTwo Motorsports Kawasaki’s Josh Grant has finished eighteenth and nineteenth in the first two races, which isn’t good. It’s now known, though, that he suffered a huge cut on his foot just before the season and is riding in some serious discomfort.

For the second straight week, GEICO Honda’s Malcolm Stewart had to climb from the depths of the LCQ to make the main. At Anaheim, he crashed out. Phoenix was much better, as he the railed the outside of turn one in picture-perfect form to get a good start, then passed two riders in the whoops to take the lead. Cooper Webb got him, but Malcolm hung on for a career-high second. He credits his brother James for helping him dig himself out from a bad start to the season. "I can't thank my brother enough," Stewart said in a team statement. "I was so down after Anaheim 1, and then I went to the LCQ (here). I talked to him, and he told me to forget about everything and go out there and have fun. That's what I did." Malcolm picked up valuable points on leader Jessy Nelson, but is still in a 22-point hole following a DNF at round 1.

It didn’t turn around for Stewart’s GEICO Honda teammate Matt Bisceglia. "Somebody hit me from the back, and I went into a hay bale," Bisceglia said in a team statement. "Then Shane McElrath fell over on me, and I had nowhere to go. My bike went straight up his bike. I ended up going down." The second-year pro would come back from last to finish eleventh. "I fought for as long as I could and came back as far as I could. It was all I could do."

Zach Osborne, slowed in part due to a broken thumb sustained at Anaheim 1, dropped to seventh in Phoenix after securing the holeshot. “It’s tough with the injury, but I’m trying my best to ride through it,” he said in a team statement. “My start was good, but I should have done a little better. I’m only nine points out of the lead and I’m ready to move on to next week’s race at Anaheim.” Osborne is currently fourth in 250SX West Region points, nine back of Jessy Nelson.

As for Nelson, he was good at Phoenix en route to a podium, but he thinks he could have been better. “We made a shock change to the bike and I don’t think I liked it as much in the whoops,” he said to our Steve Matthes. “I think we’ll change it back.”

Rockstar Energy Racing Husqvarna’s Zach Bell, who missed eight races last season, secured his third career top-ten finish Saturday night, his first since Atlanta in 2013. “I was riding really well in the main and, after getting caught up in the start, I went from the back all the way up to ninth,” he said in a team statement. “Overall I felt good on the bike and I feel strong. I’m getting better and better each week I'm and looking forward to getting on the podium.”

AJ Catanzaro, thanks in large part to excellent starts, made his first career 450SX main in Phoenix. “Felt like crap all day yesterday. Glad I was able to put together a good race in the lcq and get the win. Bike trouble in the main,” Catanzaro said on Twitter. “Love pulling those holeshots on a stick bike though!! Makes life easy I tell ya.” Catanzaro is expected to move back to the 250 once the series heads east.

In his second race back, starts hindered RCH/Soaring Eagle/Jimmy John’s Suzuki’s Broc Tickle. “The main event was a cluster for me. I didn’t get a good start. I ended up with a bunch of guys in the beginning and just had to ride around for the first five laps,” he said in a team statement. Tickle conceded that starts are a priority entering Anaheim 2. “I need to practice starts, do the basic run through of everything and just keep building. I’m frustrated because I was right there with [Jake] Weimer tonight so I could have been right in there if I hadn’t made that mistake.”

Monster Energy/Pro Circuit Kawasaki rookie Chris Alldredge made his first career 250SX main event in Phoenix. He ran inside the top ten before a crash late sent him reeling to fifteenth. “These guys are the best in the world at what they do and hats off to all of them. They’re amazing riders and I didn’t have it for them today,” Allredge told Racer X. Pro Circuit team owner, Mitch Payton, seemed pleased with his performance. “I think he rode good, and then in the main event he had a decent start, but first time, I think he wasn’t used to the pace of what those guys were doing and that was the problem,” Payton told Racer X.

In his second career 450SX start, Yoshimura Suzuki’s Blake Baggett finished thirteenth, one spot down from last week. Baggett, unlike fellow rookies Dean Wilson and Cole Seely, didn’t have much 450 experience entering the season and admitted he is still learning. “There’s definitely been a big learning curve,” Baggett said in a team statement. Though learning, Baggett says it’s time to pull the “trigger” as well. “I definitely need to pull the trigger and make something happen.”