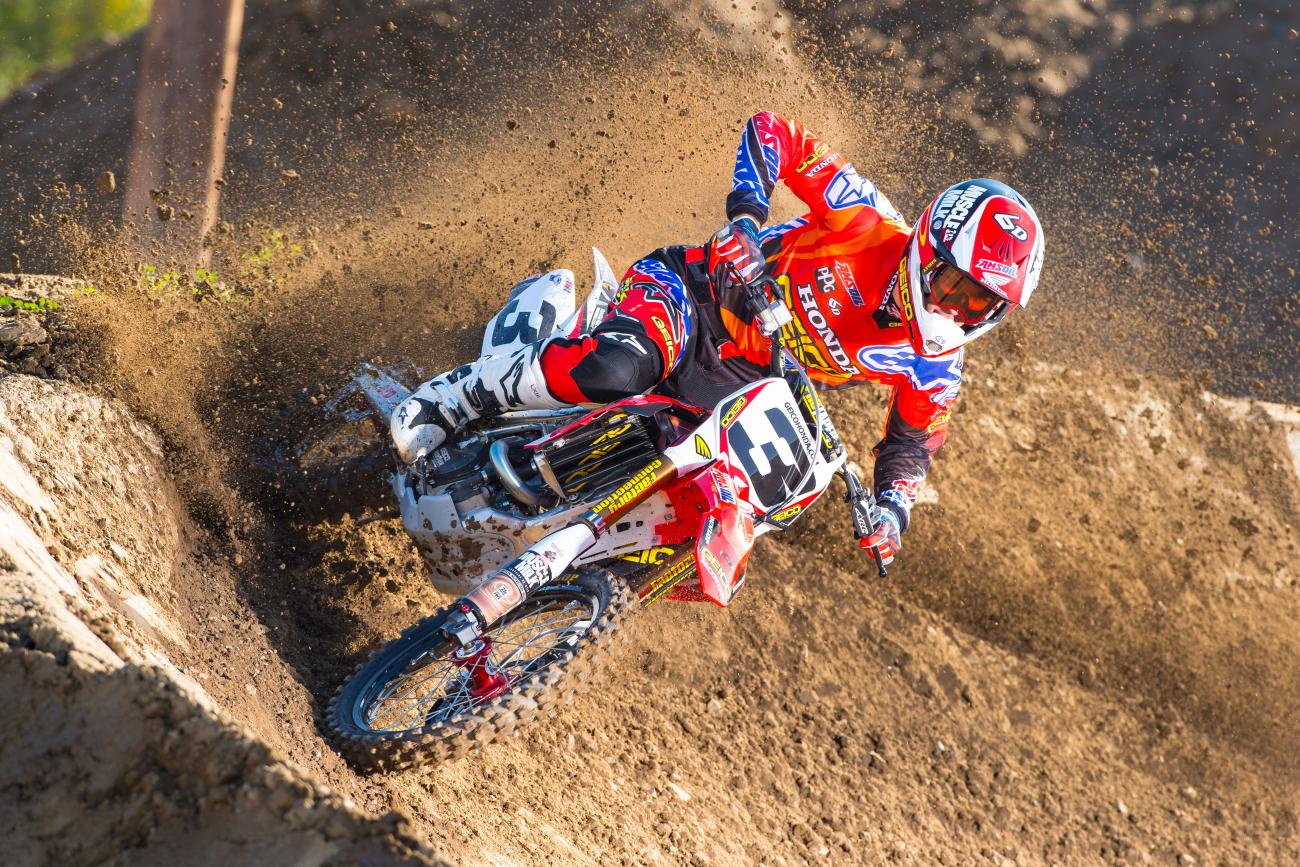 The season opener has a track record of producing some wild results. Sebastian Tortelli came from way back in the mud to take the win in 1998, Kevin Windham survived a monsoon to win in 2005, Josh Grant won in 2009 after Chad Reed, James Stewart, and Windham all went down early, and Ken Roczen won last year. Things could get outrageous again this year as a hungry field struggles to fill the power vacuum created by the absence of Stewart and Ryan Villopoto. –Aaron Hansel

Full-Time in the Big Time

Cole Seely, Jason Anderson, Dean Wilson, and Blake Baggett will all begin the next phase of their careers this Saturday night in Angel Stadium. They’ve all done well on 250s, but that doesn’t always translate into immediate success in the 450 ranks—Eli Tomac’s injury-riddled 2014 season is proof of that. Then again, sometimes it does—Ken Roczen had a pair of wins and finished third overall last year in his first full 450SX season. Let’s see how 2015 gets under way for the latest group of exciting 450SX rookies. –Hansel

As mentioned above, Eli Tomac’s 2014 season was marred with injuries. The GEICO Honda rider got together with Jake Weimer at the opener, injured his shoulder and didn’t race his first main event until Anaheim 3. He crashed in practice in Daytona several weeks later and re-aggravated the same shoulder, forcing him to miss three more races. To top it off, he broke his collarbone right before the Vegas finale, putting the cap on a throwaway season. Tomac’s used his mulligan—now it’s time for him show us what he can do. –Hansel

Cracked skull, broken right humerus, and a broken collarbone: that was the injury list for Wil Hahn after going down hard in St. Louis last year. Luckily for Hahn, he’s tougher than a set of TwinWalls and it’d take more than a few broken bones and a cracked cranium to hold him down for any length of time. He’ll be back at it this Saturday night—look for him to be going for it like the racer he is. – Hansel

Tis the season for the annual “Who doubts Chad Reed” debate. Jason Weigandt wrote a piece last week on the subject, which you should check out. It’s not so much people doubt Reed to make podiums or win races. But, hold a gun to most and they’ll probably tell you they don’t expect Reed to win the title. Reed turns 33 this year, but few are completely writing him off—not me, anyway. Health has been a concern the past few seasons, but if you examine it further, it’s not nagging injuries that have beset him—it’s a big crash here, a big crash there. That’s just the nature of the beast. Reed embraces the underdog role and will carry it into 2015. The title won’t be won Saturday, but Reed will want to make a statement. – Chase Stallo

Ryan Dungey, the most overlooked past champion in recent memory, enters another season flying squarely under the radar. Maybe it’s his good-ole-boy personality that keeps him under a dark cloak, or maybe it’s his somewhat conservative riding style. Results have never been in question for Dungey. He’s one of the most consistent riders in the history of supercross. A willingness to push the edge on the other hand has been brought up time and again. Without RV in the mix, Dungey may be able ride the podium all the way to another championship. Or maybe we see #AngryDunge again. We’ll find out Saturday. - Stallo

New Winners on the Horizon?

According to the Anaheim 1 entry list, the 250SX West Region will feature only four previous race winners in Monster Energy Supercross—Josh Hansen, Justin Hill, Tyler Bowers, and Darryn Durham—with Hill being the most recent. By all appearances the West is up for grabs, with many tabbing Hill as next in line. A strong statement for title supremacy can be made this weekend. Will it be Hill or the field? - Stallo

Saturday night will mark the return of three once very prominent riders: Nico Izzi, Josh Hansen, and Tommy Hahn. Off-track issues have dominated the headlines for Izzi and Hansen, but they seem focused on reviving their careers in 2015. It’s been some time since we’ve seen these guys on the 250SX gate (Hansen, 2011; Hahn, 2008; Izzi, 2012), and on the podium. Will their experience play a role Saturday night? - Stallo

Former American Honda teammates Trey Canard and Justin Barcia each enter 2015 with the same goal—to win a title. Canard arguably has the most momentum entering the opener, while Barcia is trying to rebound from a disappointing 2014 season. Saturday will mark the first time in Barcia’s professional career that he’ll start a season on something other than Honda, while Canard tries to deliver his first win since April 2011. Who will come out on top? - Stallo