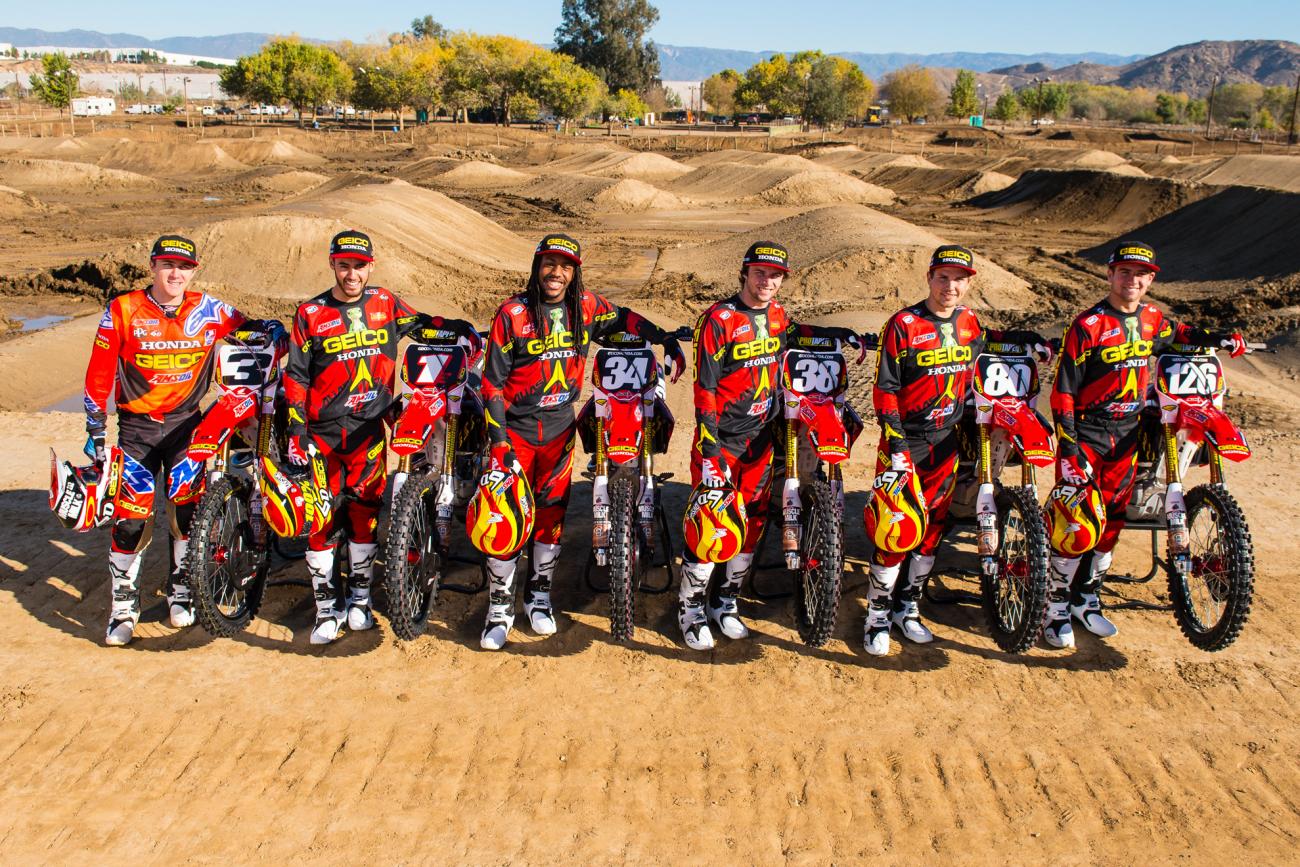 BTO Sports is your number one source for all of your motocross parts, gear, accessories, and apparel. BTOSports.com is a motocross company that is truly dedicated to the sport and to the customer. Proud sponsor of your Racer X Podcasts and the BTO Sports race team.

We’re on the eve of the 2015 Monster Energy AMA Supercross, an FIM World Championship, and for the teams and riders, things couldn’t be any more tense. The holidays aren’t really thought about much—they are more of a nuisance than anything else if you’re trying to win races. Everyone goes into the season with the best of intentions. Every member of every team in the pits has put a lot of blood, sweat, and tears into this thing to try and make it great. And sometimes it is great. When a team is winning people enjoy going to the races and they enjoy the hard work.

But sometimes, racing sucks. Sometimes things don’t work out the way that people think they should. And riders get hurt or underperform. This happens a lot. And soon you start to hate your team, the work, and the travel. If you’re a rider that’s struggling; the bike becomes un-rideable. If you’re a team member, the rider is lazy and probably kicks puppies in his spare time.

It’s a narrow line between success and failure in this sport, and I thought I’d take a look at a bunch of teams and write about what would be a good year and what would constitute a bad year.

It’s a good year if…
Millsaps remembers that the last time he raced, he was really good…Hahn continues  his upward climb, scores some top-fives, and maybe a podium…let’s face it, if Hahn and Millsaps make every race it would be a success…fans stop asking “Where’s Ryan?”…they become the first team to introduce a quadruple-air fork and thereby trump everyone else and their dumb triple-air fork.

It’s a bad year if…
Millsaps can’t regain his form from two years ago and gets hurt again…Hahn gets hurt and can’t finish the series…this team has to get a replacement rider for any amount of time…RV sends Skype messages from Europe eating a waffle and smoking a cigarette while posting his lap times from the most recent GP.

It’s a good year if…
Trey Canard wins some races and finishes top-three in the points…Cole Seely makes the podium a few times and is a consistent top ten rider…the media never hears a peep from either rider about their “chassis set-up”…the Honda chefs over there keep on making that delicious tri-tip each week…someone wins the Daytona Supercross by Honda so every Honda exec at Daytona can breathe a sigh of relief…JMB comes over from Europe and hangs out.

It’s a bad year if…
Trey Canard gets hurt. Again… if anything other than a Kayaba suspension component shows up on the #41 machine…Seely can’t get into the top five…Seely switches from Showa to Kayaba suspension…Honda pulls back on their catering budget…Honda loses another sponsor or HRC pulls out citing lack of results…and yes, we know, HRC is owned by Honda.

It’s a good year if…
With the James Stewart thing there’s almost nothing that could make it a great year…Blake Baggett is consistently in the top seven and shows that everyone thinking he moved up too soon is an idiot…Yoshimura finally disappears off the side of the truck and is replaced by a outside the industry title sponsor…Mike Webb is able to secure some Matt LeBlanc money or just get him to hang around as often as possible…Baggett podiums at Daytona, a place where he’s really good…Unable to race any supercrosses, Red Bull creates the JS7 indoor series at a series of barns across the country, and James sweeps every race (except for losing one Dash for Cash to Ryan Lockhart) and wins a title for Yoshimura.

It’s a bad year…
Who are we kidding, it’s already a bad year for the Yosh guys with this Stewart penalty finally being announced…Baggett struggles on the 450 …Baggett’s wrist injuries continue to plague him…Stewart’s entourage of friends, sponsors, handlers just walk around the pits aimlessly bumping into each other while looking for something to do…Mike Webb, trying to spice the mood up around the pits, gets an actual Chupacabra for a mascot, but it attacks and eats a fan, thereby costing Webb his job and he’s forced to be a butler for his brother, The Wolfman.

It’s a good year if…
Justin Barcia gets his mojo back from two years ago, wins multiple races, and challenges for the title…Weston Peick continues to be a top-ten rider week in and week out…the team provides free Weinerschnitzels to media members…Barcia and Peick get along and work together… the team doesn’t keep getting purple-happy with its bikes and leaves it as a nice touch and not a Barney character…Jeremy Albrecht doesn’t get into trouble with Coy Gibbs for saying too much in some interview…Phil Nicoletti, who’s a fill-in rider and doing all the outdoors, doesn’t race a supercross because Barcia and Peick stay healthy…Coy Gibbs finally gets by level forty on the latest video game he’s playing in the lounge.

It’s a bad year if…
Peick beats up Barcia or a member of his posse at any point this year…Barcia shows that it wasn’t the Honda and it’s just him…Peick beats up a fan…Phil Nicoletti races a supercross…Peick beats up Albrecht…Weinerschitzel makes Peick wear the wiener suit out on the track, and he beats up a flagger in anger…Peick gets hurt—wait there’s no chance of that…the team, frustrated at the KYB suspension and not allowed to go back to Showa forks and their homemade shock, bolts on Sachs and the struggles continue.

It’s a good year if…
Roczen puts the Chipotle down, wins multiple races, and takes the title…the team hires more people than Team TwoTwo and wins the arms race they have going on…Tickle shows he’s 100 percent recovered and finishes in the top ten every race with a few top fives…RC loses a few zippers off his jacket…Kenny Watson continues to change the game when it comes to pit presence…Carey Hart is able to ink a #1 plate on his arm.

It’s a bad year if…
Roczen cannot put the Chipotle down and get used to the Suzuki…Tickle gets gun shy every time he goes for a big jump and checks up…the team, heavily reliant on data, decides to just ditch Roczen and get a robot to ride…Kenny Watson insists on the team wearing glitter gear and gets fired…The band Cashed Out plays in front of the semi and a riot is started.

It’s a good year if…
Ryan Dungey adapts to the new bike quickly and racks up wins and contends for the title…he’ll be top-three in the points because he’s Ryan Dungey…Wilson proves that you can work with speed and becomes a top-five guy…Marvin decimates whatever 250SX coast he’s riding in and shows that in his sixteenth year of 250 class he is finally the man…Hill shows the form he had at the Monster Cup, wins many races, and is top-three in the title chase…Dungey says at some point, “bike’s good guys, no need to test anymore”…Wilson goes back to being a Canadian (one can dream, right?)…KTM finally gets around to honoring me for taking Kelly Smith to KTM’s first-ever AMA SX and MX wins in 2000.

It’s a bad year if…
Wilson continues to go very fast and then fade very fast as well…Dungey never gets comfy on the new KTM and struggles to a bunch of thirds and fourths…Hill thinks that he’s made it and reverts back to 2013 Justin Hill…Musquin hurts himself and we forget about how fast he is again…Wilson insists on wearing a kilt for riders meetings…Injuries strike and DeCoster is forced in as a fill-in rider…Red Bull runs out of money.

It’s a good year if…
Savatgy can get the Playstation Network up and working (see Twitter)…Cianciarulo can avoid injuries—oh, wait, never mind…Bowers gets his arenacross mojo working and grabs a win or two…Tonus pulls a “Pourcel” and immediately adapts to supercross…Alldredge pulls top-fives, maybe a podium, and charms the media in the pits.

It’s a bad year if…
Bowers gets his arenacross mojo working and gets in trouble with the AMA…Tonus pulls an “Albertyn” and can’t stay on two wheels in supercross…Savatgy insists on doing arm swag over every jump…Pro Circuit has another bad year and Mitch Payton reverts to “1995” Mitch Payton on his staff and riders…Cianciarulo quits motocross to be a roadie for Blink-182.

It’s a good year if…
Eli Tomac goes off and wins the title...Bogle improves at the same rate as last year and wins his coast again…RJ Hampshire fulfills his rookie hype and becomes more Trey Canard than Ben Riddle…Mookie gets a “4JS7” butt-patch and rides angry all year long, which results in him winning races…Jordon Smith stays healthy and matches Hampshire with great results…Tim Ferry, working with Hampshire, is around the truck a lot and morale around the team improves…Bisceglia stays out of the LCQs…manager Mike LaRocco actually smiles.

It’s a bad year if…
Tomac gets hurt at the first round, again...Mookie’s dreadlocks get caught in his sprocket and he’s out for the year…Hampshire decides that he’d rather get back to pitching than moto…the team has a holeshot competition at the test track and LaRocco wins…Smith races some arenacrosses to get his SX license, enjoys life in the smaller arenas, quits GEICO, and gets a ride with Primal Impluse Bill’s Pipe’s Suzuki team in Arenacross on RM125s.

It’s a good year if…
Jeremy Martin qualifies for the first round of SX…Cooper Webb wins some races…Martin remembers that at the end of the 2014 250SX East Region, he was really good…Rodriguez is able to keep it on two wheels…Plessinger gets into the top five here and there as a rookie…Lamson continues to use his title-winning experience to guide Martin and Webb to the top.

It’s a bad year if…
Martin gets the shakes once again and doesn’t qualify for the opening round…Plessinger can’t resist his paternal urges and insists on racing with a big tank and hand guards…Rodriguez continues to test out the durability of helmets…Webb says “Cool as crap” again…Star fires another team manager…Lamson makes everyone race YZ125s because “I won a lot on 125s”…Webb and Martin decide to start smashing into each other again.

It’s a good year if…
Anderson really emerges as a potential top-five guy every week with a podium here or there…Davalos recovers from a pretty serious injury and gets back to winning heat races…Osborne stays healthy…manager Dave Gowland brings in his old rider Ross “Rollerball” Pederson to be trainer/riding coach/rider mentor/badass dude… Zach Bell stays on two wheels—wait, he did that this year and wasn’t as fast…the team puts a Husky on the box and somewhere out there Micky Dymond smiles and a single tear rolls down his cheek.

It’s a bad year if…
Osborne insists on running a big tank and hand guards…Davalos can’t recover from his injuries…Anderson takes “Happy Living in the Now” to a whole new level and refuses to leave the beach to come to the races…the Huskys don’t work out and the team is forced to bolt two shocks on them…Bell decides to hang it out and he starts taking soil samples…Anderson, flush with money and an entourage, changes his name to “And-Dog,” won’t take off his huge gold chain with a Husky logo on it, runs two phones at all times, and also decides to quit training…Rollerball doesn’t come to any races.