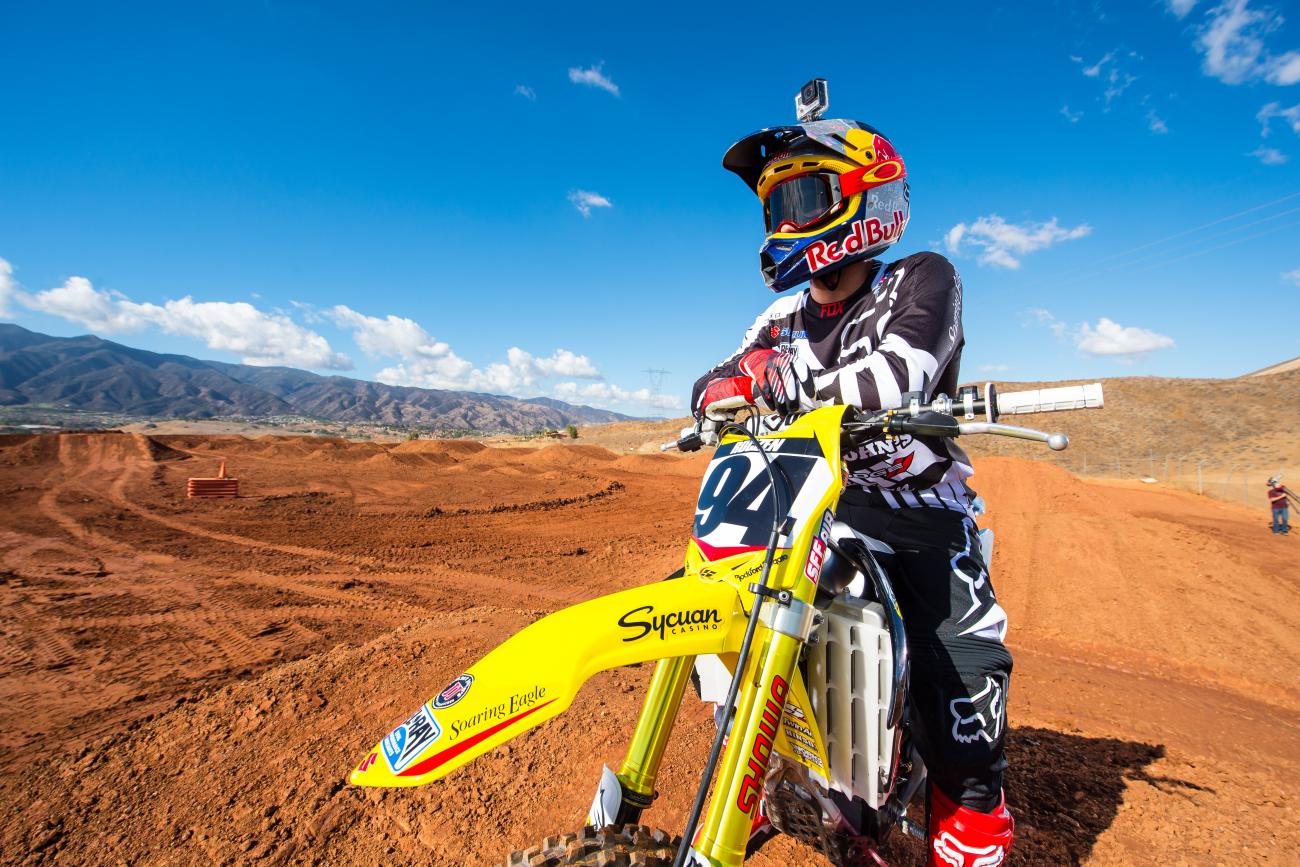 And now ladies and gentlemen, we present the three most obvious questions heading into Anaheim 1. Our staff gives some answers, add yours in the comment section below.

Jason Thomas: I expect to see a lot of different guys all thinking "this is my year." The title looks to be anyone's at this point, and everyone will be staking his claim as top dog. I think there will be some big crashes and people taking a lot of chances to make that big statement. The silly thing is that this race pays exactly the same amount of points as every other round but you would never know it. For the title contenders, making wise decisions and getting solid points is much more important than grabbing a headline at A1.

Chase Stallo: I expect to see racing. I expect to see the always-vibrant Dianna Dahlgren. And I expect to see James…oh, wait. On a serious note, I’m not sure what we’ll see. Ryan Villopoto has left a massive hole at the top, and I don’t think we’ll know who is going to fill it before, or even after, Anaheim 1. I think we’ve come to expect the unexpected at the opener. From Josh Grant’s unlikely win in 2009, to the Canard-Millsaps duel in 2013, to Ken Roczen winning a year ago, Anaheim always brings a certain flair and surprise element with it. Following those lines, I expect the headlines to read “I didn’t expect ‘insert rider’ to win.” Or maybe not. Who knows?

Jason Weigandt: The opening round is often an aberration—the fastest rider at this race is usually not the fastest rider over the bulk of the season. There are two reasons for this. First, pressure and nerves are huge here, and different people react in different ways. A lot of title contenders will ride tight, which opens the door for an underdog. The second reason is that no matter how much testing these guys do, they don’t always nail the bike setup until they start racing on it. Everyone is guessing to some degree.

Steve Matthes: Monster girls, fireworks, maybe Ronnie Mac, and lots of dudes scavenging the pits looking for a Knothole Club pass. But seriously, it could be anything, as we don't have Ryan Villopoto or James Stewart there, so really, and I hate to say this, it's wide open.

The tracks at the first few rounds are generally pretty tame, so it enables everyone to go fast and keeps the times pretty close together. Like Chaser mentioned, we always see some surprises at the opening rounds even going back to Anaheim 1989 when Johnny O'Mara was so close to winning on his Suzuki before casing a jump and having his frame break.

You know one guy that sort of elevates his game at Anaheim that's not named Chad Reed? Cole Seely, that's who. He's good on the slick dirt of SoCal, he's on a 450 full-time, and I've heard he looks good at the test track. (Granted, you don't ever hear team guys tell you "Man, ’Rider X’ really looks like crap right now coming into the first round," so take that with a grain of salt.) And I could see Seely doing something surprising at A1. Just a guess though.

2. We’re not 100 percent sure on East/West Coast lineups, but we're close. What do you expect from 250SX West?

JT: I look for the cream to rise to the top. I think Justin Hill will be right at the front and, if Joey Savatgy is West, I see him there also. Mookie will be strong if he can get a start; this is his best chance to win a title. The interesting question mark is Josh Hansen. What will he have up against the new kids? He was a title contender when he was last in the class, so I am sure he is hoping to hop in where he hopped out.

Stallo: Judging by the pre-entry list (those are always accurate, right?) the West Region is stacked again. I don’t think there is necessarily a clear-cut favorite, but one name continues to catch my eye—Cooper Webb. The second-year pro garnered three podiums in his rookie season a year ago and led a number of laps on his way to fifth in points. Webb’s proven to be consistent—he finished outside the top ten only once in 2014—which is what I feel will win the title in 2015. I don’t foresee four or five wins from anyone.

Weigandt: To me all signs point to Justin Hill as the favorite. He’s following the standard path—learn in the rookie year, win in the sophomore year, battle for the title in year three. He’s further boosted by a lack of a championship-tested veteran in the class. Last year’s field featured riders like Cole Seely and Dean Wilson, who had won a ton of races and had fought for this championship before. This year’s group doesn’t have an entry like that, so Hill is actually one of the most established players. I think Cooper Webb will be fast, but Hill has an extra year of experience. As a dark horse, I expect a breakout season from Troy Lee Design KTM’s Jessy Nelson.

Matthes: I WOULD LOVE TO TALK ABOUT THE 250 WEST REGION, BUT THE TEAMS WON'T TELL US WHO IS RACING WHAT COAST IN SOME SORT OF SECRET AKIN TO WHO SHOT JFK, SO I HAVE NO IDEA. GOOD JOB, EVERYONE IN THE SPORT!

(Rant over, but whichever KTM guy is racing the West or East will be up front.)

JT: This is such a torturous question for me, and I have changed my mind at least five times since the outdoor season ended. I really, really want to pick Reed because I know he is more ready than we have seen him maybe ever before. The smart money is on Roczen, because we saw how much speed he has, and he should have learned quite a bit after his rookie year. In the end, though, I am going to go with the old workhorse, Ryan Dungey. Even though he may not always stand out or blow your mind with flash, at the end of the year he is always there. Last year, he only won one race, was not talked about virtually at all in the wake of Roczen, RV, and Stew, and was still second in points when we left Vegas. It's just his M.O. to be consistent, healthy, and up front.

Stallo: We can all claim that we know who is going to fill RV’s shoes. We can stamp this or stamp that, but in reality, this season is wide open. And I have no clue who is going to win. Since there is zero fun in that, I’ll throw a name in the ring—Eli Tomac. It’s easy to forget just how badass this guy is in supercross. Tomac won eleven races in his 250SX career—three less than Anderson, Wilson, and Baggett combined—and nearly two titles. (He just missed out on the 2013 West Region Championship to Ken Roczen.) Of course, if he doesn’t win, I’ll pretend I never said any of this. The Internet doesn’t keep track record, does it?

Weigandt: I don’t think I’ve ever said “Big Seven” for a group of title contenders before, but that’s where we are this year: Roczen, Dungey, Barcia, Tomac, Millsaps, Canard, and Reed all have the credentials to take this. That’s amazing! I’m really starting to feel Millsaps has the right all-around package, but I’m going to stick with my original pick, Roczen. If you plug all the data into a computer, I think it’d spit Kenny’s name out. This year’s group is extremely close, but I think Kenny is the safest bet.

Matthes: Like Weege said, you would have to think Roczen; he was third last year in his rookie year, and in a sport that rewards youth, he's on an upward trajectory. The bike switch worries me a little bit, but Kenny Rocz is one talented dude and should be fine. Tomac's got all the momentum from the off-season, but he missed races in both series last year due to injury, so he's got to stay off the ground. And Ryan Dungey is Ryan Dungey (good one Matthes!), so you just know he'll be in the mix.