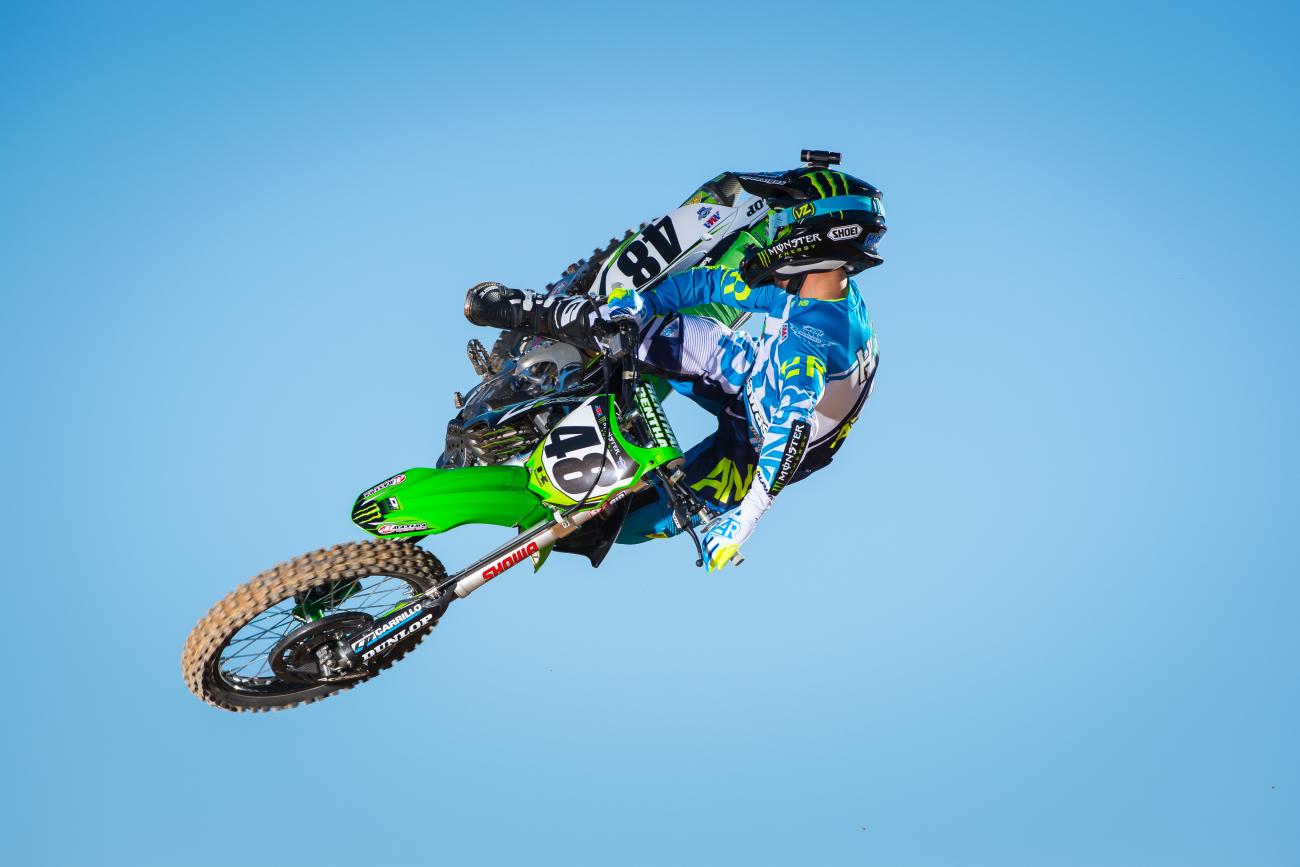 We're assuming as a motocross fan (and perhaps, rider) you've at least once experienced a training session where you really push yourself. You've reached the limits, your lungs are burning, tongue is wagging, muscles are burning. At that point, you've got just a few minutes, or even seconds, of suffering left before the hill ends, your interval stops, or the moto ends. During that time, it can be helpful to just think about something else besides the pain. Just do something to take your mind off of it for one minute. It can make all the difference.

That, friends, is what you need to do right now. We're so close to Anaheim and the 2015 Monster Energy AMA Supercross season that we can almost taste it. You just need something to distract you momentarily, and make the painful waiting process a little simpler. Oh, what's this? Christmas? Yes, just deal with that for the next week—buying, giving, getting—and next thing you know you'll be planning a New Year's Eve destination and welcoming 2015. Merely days later, it's Anaheim 1.

For now, we'll try to take your mind off the waiting with The Word On... Then do some shopping, and your real present will be here before you know it.

Reason #782 why I’m too old for Twitter RT @Captain891: Swaggy P just let em know who the swag lord is

INJURY PRONE? DEPENDS ON THE SERIES

As we began preparations for our annual Racer X Supercross Preview Shows last week—Weege, Matthes, and JT are flying into Morgantown this week and we hope to release our first show next Monday—I began digging through tons of statistics from over the last five or so years. There were quite a few I’ve found intriguing, one I mentioned in Racerhead last week, and the other I’ll touch on here. (You’ll have to wait for the rest in our Preview Shows.)

The common perception surrounding Davi Millsaps is that he’s injury prone. That's only true to an extent. If we're talking motocross, it's true. Since moving to the 450 Class in 2006, Millsaps has missed fifty-six races in Lucas Oil Pro Motocross, including all of 2013 and 2014. Monster Energy AMA Supercross provides a different story. From 2007, his first year in 450SX, to 2013 Millsaps missed just eight races—all coming at the start of 2007, when he was recovering from a broken femur. He made every 450SX race from 2008 through 2013, and then he missed all of 2014 due to injury. There’s speculation that Millsaps can’t make it through an entire supercross season healthy. History shows us a different story.

Before his work with Racer X, Andy Bowyer was a Team Green standout. If you visit the LL Racer X Vault, you’ll see that Bowyer made nineteen trips to the AMA Amateur National Championships at Loretta Lynn’s, winning the 1989 65 (7-11) Stock Class. While digging through an old Team Green book, we found this old photo of Bowyer at Hangtown National amateur day in 1996. Bowyer has a great story behind the classic photo.

“That’s at the 1996 Hangtown National. Ron Heben made me ride the A class on Saturday (when the pro races ran on Sunday). I pulled the holeshot over local B class hot shoe Jeff Northrop who was applying pressure when I approached a fourth-gear wide-open sweeper. By the time I saw the flagger with the garden hose making the dry slick corner an ice rink it was too late. I went into a 60 mph two-tire slide, struck a hay bale (which was staked into the ground), and cartwheeled violently. Not only was my bike destroyed, but I got in trouble with Team Green for verbally abusing (and physically threatening) the flagger.

Kyle Cowling, who has worked for a number of companies in moto, including Racer X, Vurbmoto and Vital MX, just released his trailer for "Spectrum," a web-based series focusing on professional supercross and motocross athletes. The cast will feature: Andrew Short, Wil Hahn, Adam Jones, Scott Champion, Luke Renzland, and more. Pre-order your copy today and check out the trailer below.

Football scouting is a hard job. It requires long hours, months on the road, and a willingness to put family and friends second. It also, apprently, requires a lot of drinking. It’s casual at first, but can quickly turn for the worse—ruining careers. Seth Wickersham of ESPN The Magazine recently profiled Scot McCloughan, a savant that “helped build two Super Bowl champions” and is now in exile. From Wickersham:

We drank together many times at the combine, always at a low-key sports bar. Although he could pound a beer impressively, it never occurred me to he might have a problem. If he did, everybody did. "Scouts would have five beers before dinner, because that's what people do," McCloughan says. "That's who they are. It's a professional sport, drinking—especially in football."

Steve Matthes leads a busy life. Between walking his dogs, riding mountain bikes, losing at Fantasy Football, and watching the Maple Leafs lose hockey games he doesn’t have much time for mundane tasks such as sending in his classic podcast(s) for The Word On. This week, he is apparently “hanging the tinsel from the tree.” Sure, Steve. Sure. We’ll let Steve get back to hanging tinsel. In the meantime, he called upon some guy named Moser (of “Just Short” fame) to submit a couple classic podcasts. The only rule was Moser couldn't put in an Andrew Short one. Take it away, Moser:

Jim Hale was another success story I hadn’t heard. The importer for AXO and Renthal for a number of years saw the demand for a glove designed for mechanics. Keeping things simple he called them Mechanix Wear gloves. Now widely popular and worn by almost every crew in the NASCAR pits, he was once offered “a truck full of money” to sell the company. Jim couldn’t be more humble about what he’s built and the impact it’s had. The ins and outs of the product side of the industry is interesting and it’s cool to know some very successful companies like Mechanix Wear, Fox, and Oakley got their start in moto.