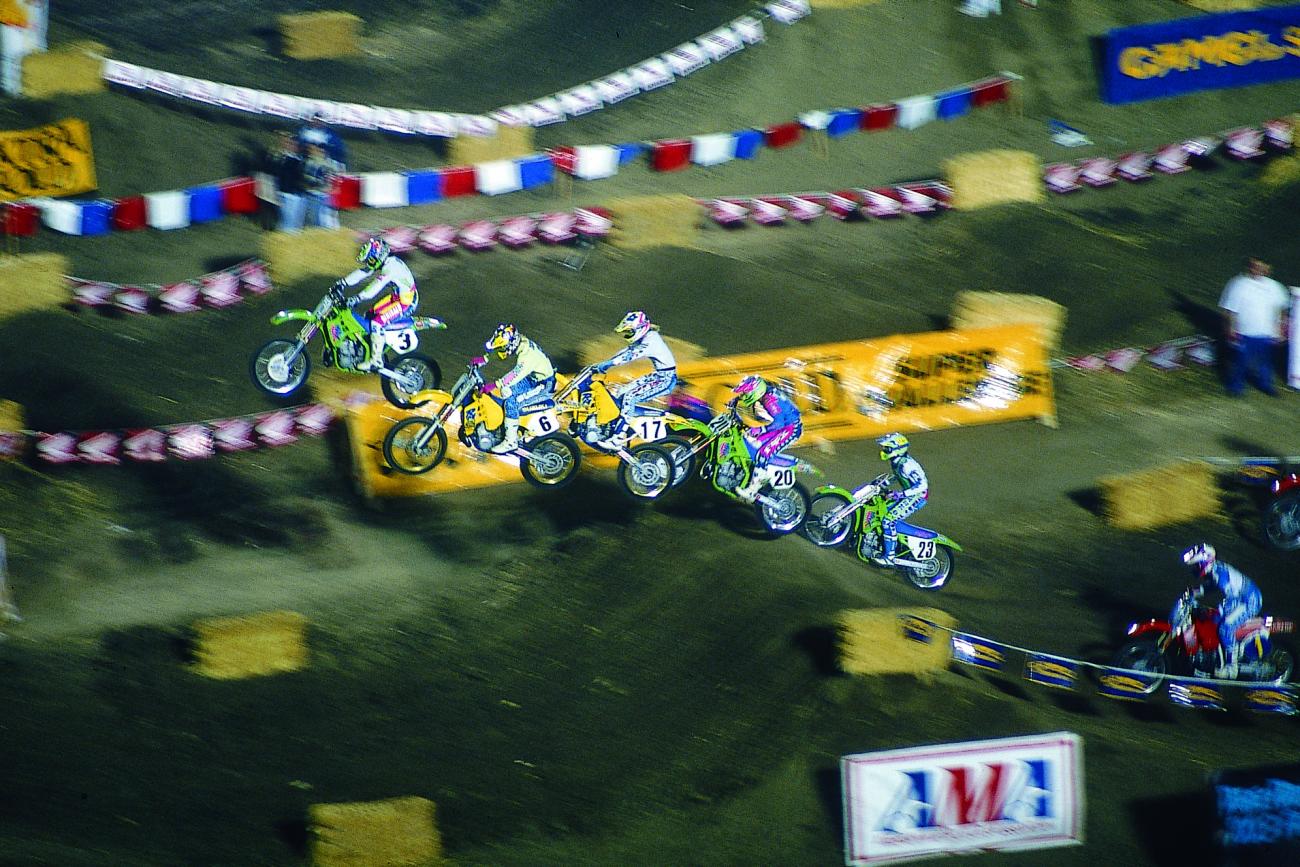 Welcome back to our forty-day countdown to the 2015 Monster Energy AMA Supercross Championship. We’ve been going through each year of the series, beginning with 1974, and we will get to year forty before the fans roll into Angel Stadium in Anaheim. Today it’s 1990 and Team Honda’s Jeff Stanton’s defense of his first major title. He would have his hands full with veterans Jeff Ward and Rick Johnson looking to reclaim past glory, as well as a super-talented crop of rookies. Every 125 SX race winner from 1989 moved up to the 250 class full time in 1990!

It was a welcome relief from the past two years of the series, which were marred by the bitter feuding of West Coast promoters Mike Goodwin and Mickey Thompson. As we explained yesterday in the 1989 review, after Thompson and his wife Trudy had been gunned down, Goodwin and his wife disappeared on a two-year sailing trip to the Caribbean. The remaining promoters were working together with what was left of Thompson’s MTEG company, which was also still running off-road truck, ATV, and dirt bike races (called Ultracross) in some of the same stadiums as supercross. Camel had come aboard for AMA Supercross as the title sponsor, which led to seeing “Joe Camel” riding in supercross ads, and one could buy a pack of cigarettes with a plastic supercross beer mug at just about any gas station in America!

TV broadcaster Dave Despain said that the 1990 field included the best crop of rookies the sport has ever seen, and that may still be the case. Damon Bradshaw, Mike Kiedrowski, Mike LaRocco, Larry Ward, and Jeff Matiasevich all moved up into the 250 class full-time for the AMA/Camel Supercross, and two-time FIM World Champion Jean-Michel Bayle had come over full time from France.

Dirt Rider magazine’s Tom Webb described the start of the 1990 AMA/Camel Supercross Championship as “Damon Bradshaw’s amazing holeshot from hell!” That’s because the precocious Yamaha rider, just 17 years old, used an incredible blast around the outside banked wall of the first turn to grab the lead and announce his arrival on the main stage to Anaheim’s packed house. If you watch the race footage from ESPN, linked here online, fast forward to the 33:30 mark to see a replay of Bradshaw’s successful gamble.

Bradshaw made it two in a row with a win at the Houston Astrodome, which you can watch here.

Bradshaw’s streak came to an end with a massive crash while leading at Jack Murphy Stadium in San Diego, site of the series’ third round. He suffered a “savagely wrenching his foot,” according to announcer Larry Maiers. After winning the first two rounds, he ended up struggling through the next few races and then missing two rounds outright with a broken foot, ending his title hopes right then and there.

The San Diego race ended up going to Stanton, who came through and caught Jeff Matiasevich to win. Stanton had struggled in the first two rounds with 7-5 finishes, admitting the pressure of the number-one plate weighed on him a bit. Next came Seattle and a hometown win for another rookie, Suzuki’s Larry Ward, who grew up right down the road in Snohomish, Washington. The crowd went nuts! He also battled past Matiasevich, who took over the points lead from sixth-place Stanton.

Honda’s Jean-Michel Bayle, the import from France, had ridden to a solid second at the Anaheim opener but then injured his elbow right after. He would go on to miss two main events as it healed up. Like Bradshaw, he was basically out of title contention. He would return at Seattle and finish seventh, at which point he was 40 points behind Stanton (76 to 36) and already counted out. But there were still fourteen rounds to go, and no one knew yet just how fast Bayle really was.

Bradshaw returned quicker than expected with the broken foot, entering what was effectively a local race for him in Atlanta. It was an amazing race—some say the best SX ever. At one point, Bradshaw seemed to have it in the bag, too, until Honda’s Mike Kiedrowski, another rookie, came blasting through and took Damon out when he lost control of his Honda. Then it was down to Guy Cooper, a revitalized Rick Johnson, and the never-surrender Jeff Ward. This one literally went down to the last couple of corners, with Wardy robbing Cooper of what would have been his first (and only) main event win, as well as what might have been a 29th Johnson win. Here’s the footage from that all-time classic.

After the Gatorback National (won by Rick Johnson in the 250 class, while Kiedrowski topped his Honda teammate JMB in the 125 class), the series went to Daytona, and Stanton used his sheer strength and speed to outclass the field on the rough, sandy track. But even with the win, Stanton was still third in the points, 9 behind Matiasevich and 8 behind Larry Ward, who were both rookies, after a terrible night in Atlanta that left him in sixteenth place (he went off the track while in a fight for the lead). Here’s the Daytona race coverage.

Unfortunately, just as he seemed to be regaining form with the strong Atlanta rider and Gainesville National win, Rick Johnson re-injured his wrist at Daytona and would drop out of AMA Supercross contention; it would also cost him any shot at the 250 National Motocross Championship.

Jeff Matiasevich became the third rookie to earn a race win in 1990, taking the Las Vegas Supercross for Team Kawasaki and extending his points lead. Also in Las Vegas, a new name appeared at the top of the results of the 125 class. Jeremy McGrath, riding a Team Green Kawasaki KX125, won for the first time in his professional career. You will find the footage of Jeremy’s Vegas 1990 significant win (significant in hindsight, anyway) right here at the 13:40 mark.

Coincidentally, McGrath is now back with Kawasaki, working with both amateurs and the pro department as a tester and advisor.

At this point, Matiasevich was looking like the real deal for the championship. He had proven consistent so far, and his Las Vegas win seemed to mark the first of many for the 1988 and 1989 West Region 125SX Champion. If you watch that Vegas clip, you’ll hear ESPN’s Dave Despain talking about how much money and fame lie ahead for Chicken, saying: “He could put away enough money to never have to work another day in his life.”

Another Kawasaki rider would win at the next round, the Rose Bowl in Pasadena, California. Jeff Ward got himself on the board with a win, but his slow start left the former two-time SX #1 way back in seventh in the points. Matiasevich took another solid second. The series then went on a one-weekend hiatus for the Hangtown National, which would also be won by Jeff Ward (250) and Cooper (125).

The Cotton Bowl in Dallas was next, and it would mark Bayle’s first-ever AMA Supercross win, not to mention the first foreign winner in the series since 1974. Bradshaw and Larry Ward would round out the podium. Bayle would go from there on a run of four wins in the next six races. The only races he lost came on the second day at Pontiac and at Damon’s hometown race in Charlotte, NC. Here’s the Pontiac race.

Bayle won races in Pontiac, Tampa, New Jersey, and Foxboro, home of the New England Patriots. But three crashes at the Charlotte race knocked him out of the race completely, giving him a single point for twentieth place. He immediately dropped back out of title contention, falling 32 points behind Matiasevich, who was 8 ahead of Stanton and 23 ahead of third-place Larry Ward. But then wins in New Jersey and Foxboro got JMB right back in the mix.

Stanton was still doing well, but he couldn’t quite overtake Matiasevich, who was riding with great consistency. By the time the series reached Oklahoma City’s bigger-than-normal track, Matiasevich held on to a lead of just a single point over Stanton, with the surging JMB another 7 back in third. The OKC race was run during hot afternoon in June, on a track both dry and slick. Under pressure to take control of the series, Stanton finally got back on track for his first main-event win since Daytona way back in early March. Here’s the complete coverage of the 1990 Oklahoma City SX, which finally gave Stanton the points lead.

The season ended with what would become a classic Bradshaw-versus-Bayle battle at the end, as Stanton rode safely to lock up his second-straight title, leaving the battle for the lead to the young guns. It’s one of the craziest last laps we’ve seen in a while, and it set the stage for the coming three-way battle between Bradshaw, Bayle, and Stanton for the 1991 crown.

All told, four class rookies won AMA Supercross mains in 1990—Bradshaw, Larry Ward, Matiasevich, and Bayle. With legends like Jeff Ward and Ricky Johnson still in the mix, and with Stanton, the 1990 season marked one of the all-time best for competition and drama—but gladly, all of it was reserved strictly for the racing instead of the background stuff. The 125 class also had its fair share of first-time winners, including McGrath, Emig, Buddy Antunez, Tallon Vohland, and East Region Champion Denny Stephenson. All told, 1990 was an emphatic start to the nineties and a turning of the page for AMA Supercross history.