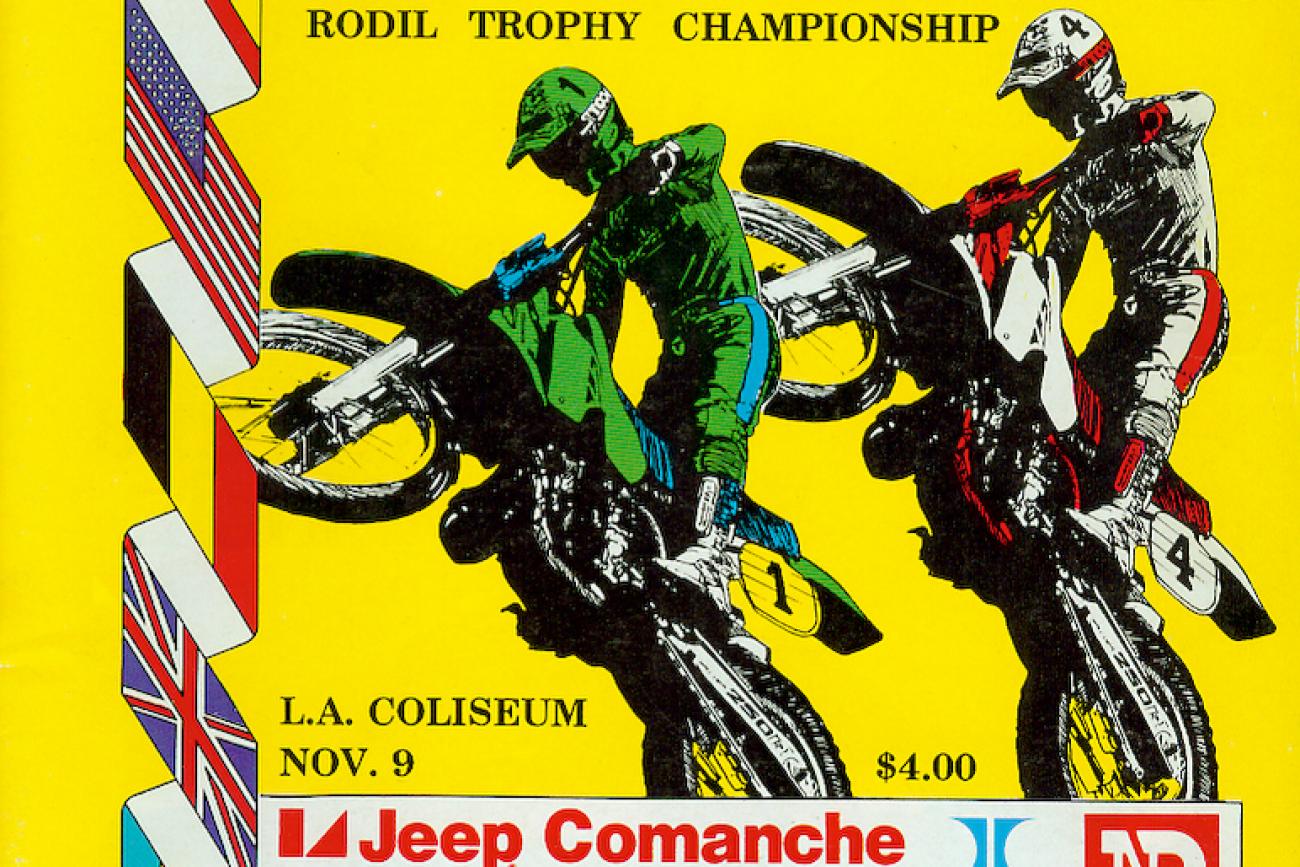 After a chaotic 1984 season, a lull ensued in the battles between the AMA and the OEMs. The AMA and the promoters-created InSport, but there were still differences of opinion on how the series format should work. It was decided in 1985 that SX would incorporate a two-main-event format for the premier 250 class, with every round except Daytona running two main events as if they were motos, and declaring one winner. It was an experiment that only lasted one year and would be scrapped. But the controversy at the end of the actual 1985 AMA/Miller High Life Supercross Championship would make Ricky Carmichael’s “Fuel Gate” twenty years later seem like no big deal.

First, a new product was introduced in 1985 that would fundamentally change the landscape of motocross in America at every level. Friends and fellow event promoters Bill West and Dave Coombs (my dad) presented the idea of adding a 125cc class in order to get young riders a chance in the spotlight. Up to that point, the only way to race supercross was to go right into the deep end of the 250cc class, which made a transition tough for guys like Erik Kehoe, Scott Burnworth, George Holland, Keith Bowen, and even Hall of Famers like Jeff Ward and Broc Glover, who didn’t even try to race SX after first turning pro. The 125 class would also be split into East and West Regions in order to give more kids a chance to test the waters, show off their skills, and learn the ropes of supercross (not to mention giving the factories a better chance to gauge the talent before signing them to them to big-bucks deals).

The concept worked at pretty much every level. It became a gateway for talent to steadily improve, and it got the factories and race teams and other sponsors investing more in amateur support in order to find their future stars. It also helped the promoters make a better show and would be pointed at as the reason to ditch the two-main-events format. Thirty years later, the East and West Regional program is still in place, albeit the 250SX Class now in this four-stroke era, still providing young talent that path to the top.

The season opener was at Jack Murphy Stadium in San Diego, and after the seemingly prerequisite holeshot by Scott Burnworth, O’Mara took over the lead and opened his title defense with a win. Here’s the race coverage, hosted by Dave Stanfield.

(At the 7:20 mark you will see highlights of the first-ever 125 Supercross, and if you can name the winner before watching it, you get an A+ for SX Trivia!)

Anaheim was next, and Broc Glover won on the now-white Yamaha YZ250.

In watching these videos, compare them to just a few years back in this series—they are flying much higher, much further than ever before. The better bikes were part of it, but so was better track design. As longtime industry executive Roy Janson explains, “We had learned how to build the takeoff jump by 1976 or ’77, but we didn’t learn how to build the landing jump until the mid-eighties. The bikes had gotten so much better, and the guys had learned how to jump things in combinations to go faster. Nineteen eighty-five was when it really started becoming apparent that supercross was its own discipline, and it required different skills than old-school motocross.”

There was also a changing of the guard, as both Bob Hannah and Mark Barnett, former champions and all-time greats, would each win their last-ever AMA Supercross main events.

Seattle was next, and Ron Lechien finally showed Honda what he was capable of by sweeping the weekend. It was the only time in the entire 1985 series that a rider would win two consecutive rounds. Then came the Atlanta Supercross, and with it came Barnett’s one and only win on a Kawasaki. It was his third career victory at Fulton County Stadium, as well as his last as a professional racer.

By Daytona both former champ David Bailey and Yamaha’s Broc Glover were racing with injuries, Glover having a cracked wrist. It would bother him all year long, but he never gave up, often icing it between heats and semis and the main events.

Before the next race at Daytona, pit reporter Tom Mueller (who also happened to be the series’ marketing director) asked the 28-year-old Hannah if he was still young enough to win against such a stacked field of young talent.

“I think today they will be wondering what happened, and what happened to me, I get a little surge of speed here,” responded the ever-confident, ever-capable Hannah, who had won Daytona in 1983 and was leading in 1984 when he jammed his wrist. He had yet to win in the 1985 AMA Supercross season, but he did win the series-opening outdoor national at Gatorback Cycle Park just a six days before.

Here is the 1985 Daytona SX, from the USA Sports Network.

This was the old-school Daytona, held in broad daylight, with deep and sandy whoops, gator pits, racecar tires painted white as the jump boundaries, and although the main event was just twelve laps, it included a double-row start for the forty riders in the main event. And after both Bailey and Ward crash in front of him, Hannah seizes the day to become the first man in history to win the Daytona SX three times.

(At the 28:20 mark watch Bowen go off the track, turn around, and ride back to the point where he went off to get back on… It would become a big deal later on for Yamaha and Glover.)

The next four races would see four different winners: Wardy won in Houston, Lechien won again at Orlando, Yamaha’s Ricky Johnson won the Dallas race, and David Bailey won the LA Coliseum on May 11. That was the penultimate round of the series. At that point Glover and Ward were tied for first in the point standings, with Ron Lechien just 2 points back. Never has AMA Supercross been so closely contested.

Remarkably, the series then went on an extended break before coming back with one last race at the Rose Bowl in Pasadena on August 17. Yes, for three full months fans were left hanging on the edge of their seats, let alone the riders!

The Rose Bowl finale would be engulfed in controversy, and long before the main events even started. During his heat race Jeff Ward crashed atop one of the jumps. He got on his bike and rolled down the jump backwards on the track, and bump-started his bike before turning around and going forward. According to the AMA rulebook at the time, any rider who rode backwards on the track should be either suspended, disqualified from the event and/or fined. In Ward’s case at the Rose Bowl he was docked a lap and fined $500, but was allowed to continue and qualify through the semis.

That was a much, much lighter penalty than the AMA had handed out in previous cases. Mark Barnett had been disqualified at a race in 1981 for riding backwards on the track, as had Danny “Magoo” Chandler in 1982 at the Saddleback National (which led to his infamous riding-the-bike-backwards finish at Unadilla later that year. And even Broc Glover himself, the man most affected by Ward’s status, had been DQ’d from the 500cc U.S. Grand Prix the previous year.)

Ward was allowed to race, and he ended up finishing fourth via 6-2 main event scores, while Glover went 5-3 for fifth. Glover lost the 1985 AMA/Miller High Life Supercross Series Championship by 2 points.

Both Glover and Yamaha were furious. According to Cycle News, his sponsors at JT Racing, John and Rita Gregory, sent a message to the AMA’s Director of Competition after the race demanding that Ward be disqualified after the fact. Yamaha’s Larry Griffiths argued, “A precedent has been set over the years, and we have to have consistent judgment.”

“If I were Broc I would go over to Ward’s pits and give him a crème puff right in the face,” said David Bailey to Cycle News, before citing some of the previous penalties handed out by the AMA in similar circumstances.

The scandal would go on well into the off-season, and ultimately the AMA’s three-man appeals board—which included Molton—decided not to penalize Ward any further. Coincidentally, Moulton, who had previously worked at Triumph, left the AMA not long after the decision, and ended up working at Kawasaki, where he would rise to the role of vice president and be credited as “the father of the Japanese cruiser,” having talked his company into entering the lucrative cruiser market in America. The other brands followed, and the rest is history. Moulton died in 1995.

The season wasn’t quite over. There was one more championship, the newly minted FIM World Supercross Championship, often called the Rodil Cup. The series would only be made up of three races, and the last one was at the Los Angeles Coliseum in November. Jim “Hollywood” Holley would ultimately win the title, but the series will forever be known for the last race at the Coliseum and the attempt to introduce a new “inverted start” format in which the fastest qualifiers—first and second in the heat races—would start the main in the second row. This would prove to be a terrible idea.

If you’ve never watched “the heat race no one wanted to win,” it’s so worth it.  Many guys decided to “throw” their heat races in order to better their spot on the gate. After O’Mara and then Lechien purposely slows down, so does second-place John Van den Berk (from Holland), and then Ward does too! Van den Berk then acts like he got shot or something, and the only guy to go through and win is Phil Larson. Ricky Johnson’s speech that followed this fiasco is already a part of supercross folklore, both the TV interview and then Ricky grabbing the microphone on the podium.

RJ was on a privateer Yamaha, because he was on the move to Honda, and his old team didn’t want to support him for the one-off race. He didn’t win, but he didn’t throw his heat race either, but what he did and said endeared him to the fans and set the stage for his race to the top in 1986.

And if you’re interested, here’s Part 1 of the Rodil Cup racing and Part 2.

Finally, if you’re wondering why we didn’t include any Cycle News covers this time, it’s because not one AMA Supercross race winner landed on the cover of America’s “motorcycle racing bible” during that season; even the week that Ward clinched the dramatic title. They featured road racer Freddie Spencer instead, as he had just won the 500cc World Road Racing Championship!